A Souls-like that earns its keep

Nearly a decade after Demon's Souls initial release, the imitators of that successful franchise show no sign of slowing down. Ashen is another independently-developed take on the steadily proliferating genre that closely mimics its source of inspiration. While Ashen wears the Dark Souls motifs on its sleeve by borrowing the punishing combat encounters and deliberate pacing, its quality of life improvements and intelligent simplifications make it an excellent entry point into an otherwise unforgiving genre. 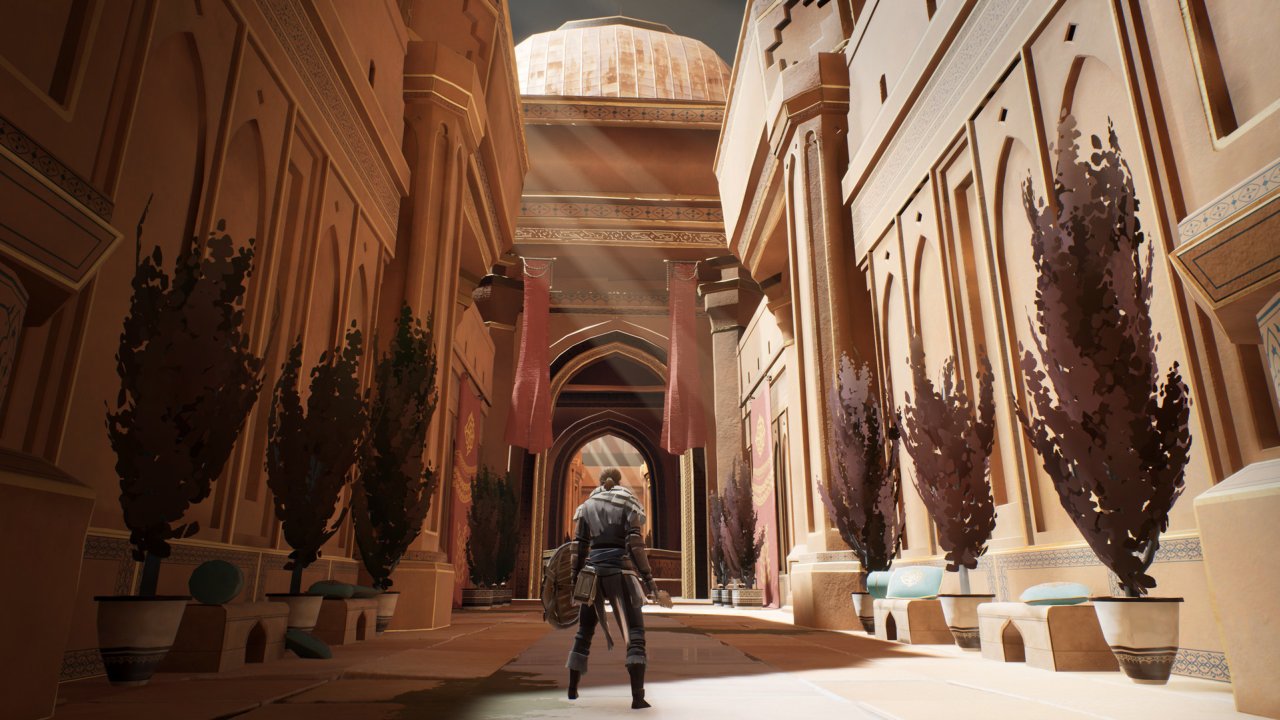 Ashen borrows heavily from Dark Souls in a lot of places to create something that isn't all that new, but it utilizes tried-and-tested mechanisms that still work incredibly well. You complete quests, outmaneuver enemies, and topple bosses while journeying through a variety of open landscapes. The melee-focused third-person combat is deliberate and slow paced as you carefully time your strikes and dodges to take advantage of gaps in your enemies' defenses, and the game's singular difficulty is high since a single slip-up against any of the game's foes could cost you over an hour of progress. If you die, you'll have one shot to make it back to where you were defeated to recover your currency. As you complete quests and defeat enemies, you're rewarded with stamina and health upgrades as well as the currency that's used to upgrade and craft equipment. All of this may sound very familiar, but Ashen doesn't screw any of it up - it's still a lot of fun to survive through tension-filled battles by the skin of your teeth, and it's still incredibly satisfying to watch your health and stamina bars grow as you become an increasingly powerful and more experienced warrior.

Ashen's core gameplay mechanics are almost directly copied from the source material – while they aren't at all novel, those mechanics still hold up surprisingly well. The combat here is pared back to focus primarily on melee – you'll come across single-handed swords, axes, daggers and shields which allow for quicker attacks and greater defensive capabilities, or you can instead wield larger two-handed axes that let you give up your shield and agility for raw damage output. No matter your choice, you'll use light and heavy attacks to deal with the enemies in an up close and personal fashion. Despite the focus on melee combat, there is a ranged option in the form of consumable throwing spears that can be crafted with materials you'll find scattered throughout the game's open areas, but they're not the combat's focus as they only deal small amounts of chip damage. As far as building an interesting or unique character are concerned, there aren't a lot of options – but that simplicity adds to Ashen's accessibility.

Anyone who has played a Souls game in the past will feel right at home with Ashen's controls. Light and heavy attacks are relegated to shoulder buttons while blocking and a shield bash is assigned to one of the left shoulder buttons by default. The face buttons are used to run, dodge, and jump regardless of whether you're engaged in combat. It all feels familiar while also seeming more responsive. The smooth animations lend a sense of fluid ease to the combat that's unique to Ashen, and the more prominent platforming sections are much more tolerable thanks to the dedicated jump button. The camera can sometimes get in the way and require too much micromanagement, but it's never an issue in combat since locking onto your opponents satisfactorily takes care of that. 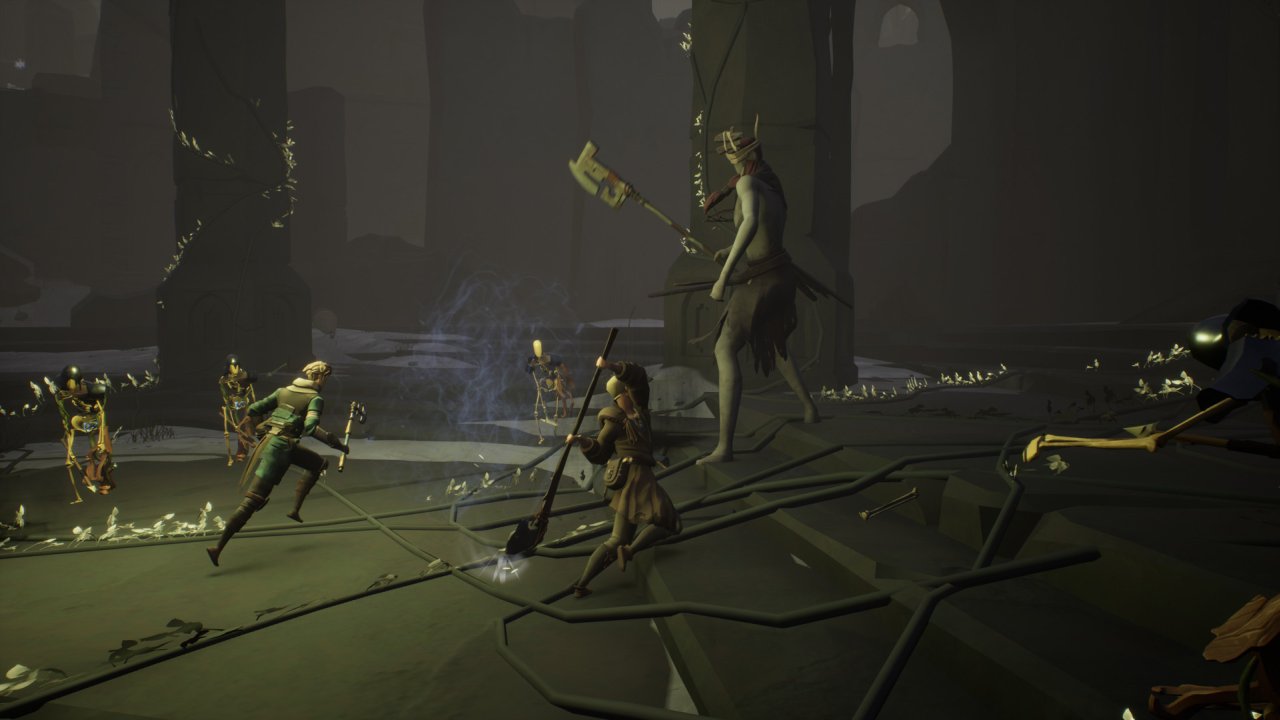 So while it will feel very familiar to fans of this sub-genre, it's the ways in which Ashen changes an often-reproduced formula that makes it noteworthy. Quest markers point you to your destinations both on an in-game compass and on the overworld map, which prevent you from getting lost and always make your goals and destinations clear. While the quest markers work well, a minimap would have been immensely appreciated since the compass is nearly useless. It doesn't take any terrain or obstacles into account, so you're required to constantly open up a menu and glance at the overworld map to reorient yourself, which also seizes control of your character - an unfortunate circumstance when an initially-unseen enemy can quickly take you down in a matter of seconds.

Ashen further differentiates itself with its focus on cooperative play - everything from the opening moments to the final climactic fight can be played with a companion. You have the option to jump in with a friend, but Ashen's system of cooperative matchmaking is one of its main selling points. As you play, you'll be randomly matched with another person that's at a similar level, but you only have a couple of pings you can use to communicate. There's no voice or text chat, nothing to identify players with, and no friendly damage which allows the multiplayer to have a greater focus on helping one another progress while disincentivizing those who prefer to play troll. When there isn't anyone around to help, the game lends you a semi-competent AI companion that won't fool you into thinking it's a human, but it still proves immensely useful in distracting enemies and reviving you after going down for the first time. Such a unique system for multiplayer isn't new either - it was pioneered in 2012's Journey - but it works incredibly well for the type of game Ashen is, and it helps alleviate some frustration that arises from the no-nonsense difficulty.

Ashen's minimalist visual style is its most striking uniqueness. It adheres to the style over substance philosophy by depicting vast locales that look gorgeous from afar despite the lack of detailed texture work. The character models are also lacking in detail, but they look great in motion - everything that moves does so in long and smooth animations. While the often drab color palette and low-fidelity details can get a bit grading after a while, the variety of locales switch up the visuals just enough to keep them from becoming unattractive. 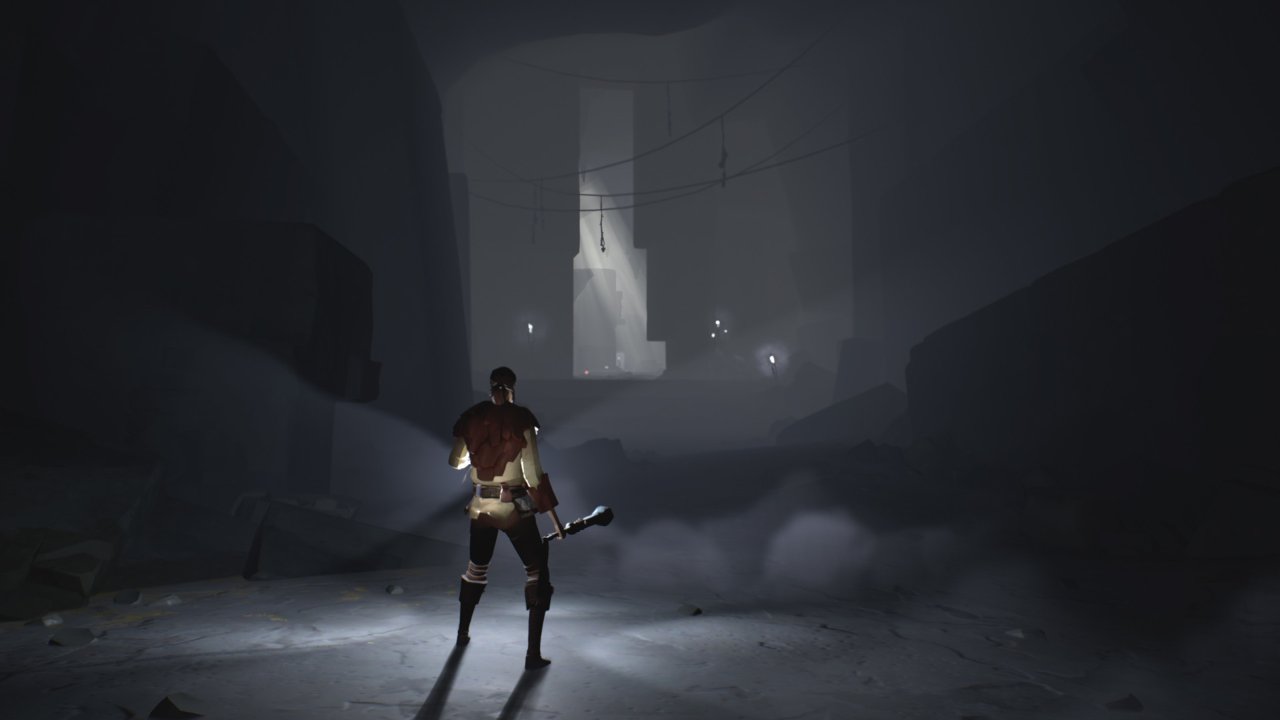 One thing that Ashen really nails is its sense of scale. You explore the typical wastelands that are full of ruins and rocky obstacles, but the setting allows for many moments of awe-inspiring grandeur. Living beings - both friend and foe - vary wildly in size which proves incredibly effective at making you feel more like the small and insignificant blip your character is. Ashen isn't immensely huge or long - it'll take a little over a dozen hours to get to the last battle - but that shorter length allows it to carefully choreograph impactful moments and sprinkle them throughout to continuously surprise the player with what its setting is capable of.

As a Souls-inspired game, Ashen has a lot going for it: an interesting and unique setting, simplified yet still satisfying progression, and a co-op system that works extremely well. It even improves upon its sources of inspiration by streamlining progression and integrating platforming mechanics that aren't frustrating. The understated visual style won't make it stand out in an action RPG space that's growing increasingly competitive, but it's still a quality adventure that deserves its due.

Our ratings for Ashen on PC out of 100 (Ratings FAQ)
Presentation
62
The simplified visuals lay bare the smaller budget nature of Ashen, but smooth animations, variety, and sense of grandeur help make up for that.
Gameplay
78
The typical deliberate and animation-focused third-person action RPG combat works as well here as it does everywhere else. The well-metered progression and the variety of locales make the frequent backtracking feel less tedious.
Single Player
62
While it's entirely possible to be alone by disconnecting from the internet and turning the AI companion off, it's not the recommended way to play. There's plenty of content to chew on, but it's more frustrating and less interesting when you're solo.
Multiplayer
80
By dynamically matching you with companions while you play, combat encounters become more dynamic and the difficulty eases up a bit. Since a couple pings are your only means of communication, you feel encouraged to actually cooperate - and you feel a deeper sense of connection when you do.
Performance
(Show PC Specs)
CPU: Intel Core i5-4690K @ 3.5ghz
GPU: Nvidia GeForce GTX 980
RAM: 8GB
OS: Windows 10 Pro 64 bit

65
The simple visual style allows for smooth performance on a variety of hardware, but the rough geometry can cause clipping to occur. When an online compatriot is with you, lag can occasionally cause breaks in the action for brief moments of time.
Overall
71
Ashen is a Souls-like that succeeds despite its lack of originality. The simplified progression, tracked quest objectives, and a persistent companion make it a great way to get into this challenging sub-genre. 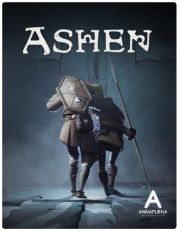 All videos for Ashen (2)
Advertisement ▼