Lock and load - it’s time to slay some vampires! No, I’m not referring to Buffy, but rather another female protagonist by the name of Damsel, who takes center stage in this quirky action platforming shooter by the same name. She’s a shotgun wielding action hero who is called upon to stop a corrupt vampiric soft drink corporation, Red Mist, dead in their tracks, as they conspire to fix their drinks with an illegal “secret ingredient”. It’s an amusing premise, but in reality, it sounds somewhat cooler and more amusing than the game actually plays. 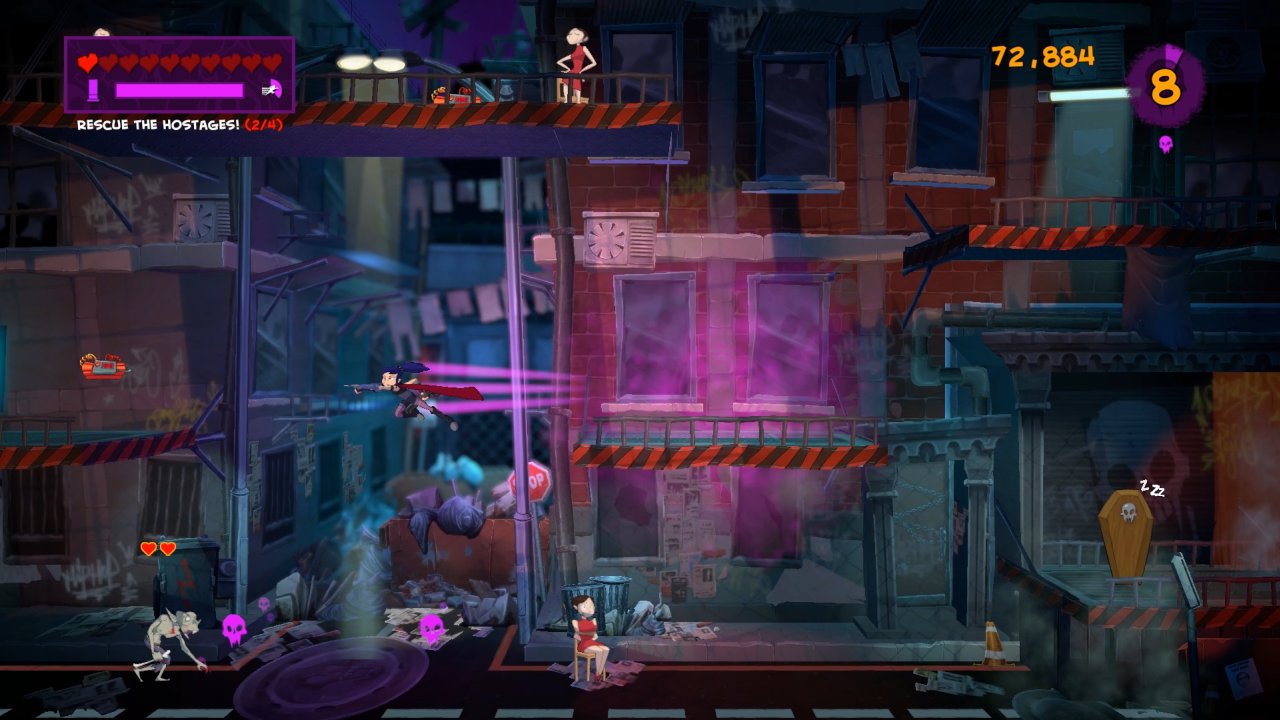 Damsel doesn’t take itself too seriously, as the plot, the cartoony visuals, and suit-wearing vampire character designs illustrate. The game’s themes contain a distinct and appealing comic book aesthetic - particularly during the neat comic strip artwork which acts as narrative cutscenes. It combines that with a sort of gothic-style vibe along with a colorful Saturday morning cartoon look, making for a distinct sense of atmosphere.

The gameplay? Well, that’s a little more standard. It boils down to pretty basic shooter-meets-platformer elements, held back somewhat by some occasionally finicky physics and a limited array of moves. Damsel is merely equipped with a shotgun, which is certainly effective at blasting her blood-drinking foes into oblivion, but she’s not given any other weapons throughout. Instead, the game focuses more on speed and versatility of movement, as she can double jump, dash through the air, and wall hop. She can also dash into vampires, which prompts her to amusingly smack them around close range with a melee attack. She can additionally perform a downward dash move, and fire both beneath and above her; feats which are actually trickier than they sound when in the thick of the chaos.

The stage layouts are somewhat shallow too, as they’re mostly slight variations of industrial, city, and dungeon-themed environments. These usually contain a hodgepodge of multi-leveled platforms and ladders to navigate, along with spikes and/or electric currents to evade or switch off. The game’s somewhat brief campaign contains 3 major “chapters”, with the third yet to be released as of this writing. Chapters come with 25 bite-sized missions, each of which can typically be completed in a couple of minutes. This setup makes the game take on a sort of mobile pick-up-and-play vibe that allows you to jump right in and knock out a couple of stages during a lunch break. Yet, it also makes for a somewhat slim, shallow campaign. 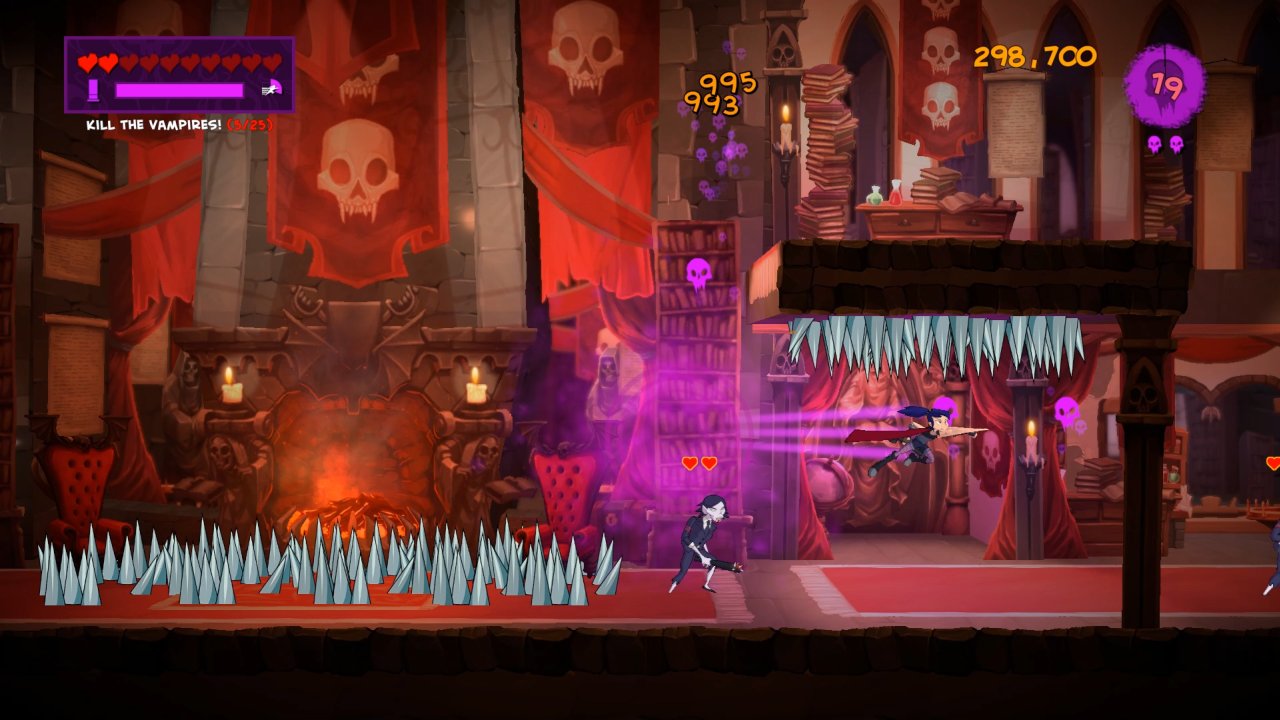 To Damsel’s credit, though, there is a sprinkling of content elsewhere which helps flesh out the replayability, including the intense, speed-focused “Damsel Dash”, “Arcade Mode”, and rotating daily challenges. These come with online leaderboards, which incentivize you to repeatedly grind through chapters to compete within the sparsely populated boards for high scores and quick speedruns. This certainly fits well with Damsel’s arcade-style sensibilities.

The gameplay itself holds up at least in short bursts, with its emphasis on fast-paced action supported by a decent mechanical foundation. The shooting controls are competent enough, though a controller is recommended to get the most out of Damsel, which demands speed and precision. Running around popping off and wailing on a variety of vampires feels satisfyingly entertaining. You often have to scramble to complete a mission within a narrow time limit, all while juggling multiple tasks and avoiding death. This makes for an exciting, albeit sometimes stressful romp.

The game wisely rotates and changes up the primary tasks of each stage, so as not to feel too repetitive, though it still allows you to complete secondary tasks for bonus points. Some missions require you to take out a certain number of vampires creeping about, along with groups of coffins, from which some emerge. Others will force you to scramble to diffuse time bombs, which cleverly embed a capsule mini game where you must time button pushes with the right color nodes. And still others will have you untying various hostages scattered around the levels with button mashing, all while taking care not to shoot them first - or get shot - in the process. 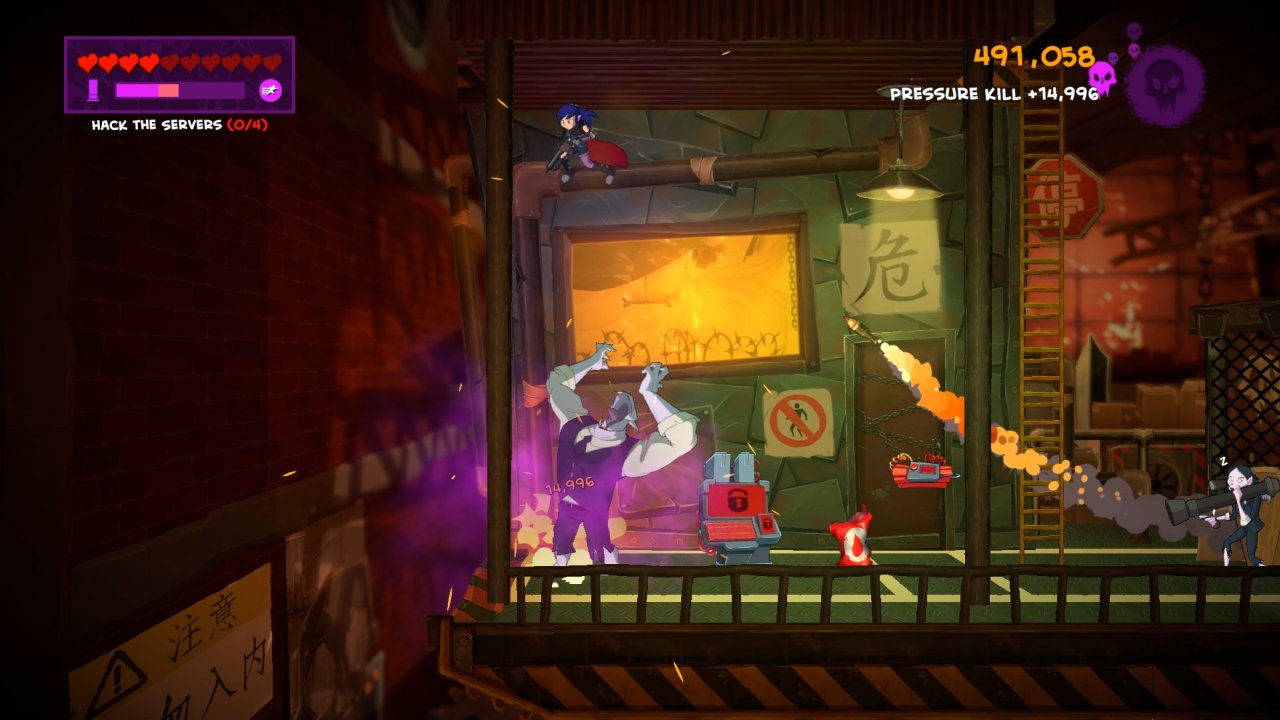 Amidst this anarchy, there are a plethora of skull collectables floating about, which the game sometimes requires you to gather. Though you can also nab them to drive up your score and extend your multipliers. Clearly the game emphasizes high scores over upgrades or powerups, which works well enough with the twitch gameplay. Still, some meatier customization, or weapon unlocks/upgrades could have made the experience more interesting, not to mention, more useful.

As Damsel never really grows through gained abilities or powerups, the difficulty tends to spike significantly once you’ve neared the halfway point and enemies get trickier and more frequent. Still, the gameplay rarely reaches a level of absurdity, and you can defeat most baddies with just a shot or two. Meanwhile you’ll have at least a few hits of wiggle room, which you can add to by destroying health barrels. Often a bit of trial and error and quick wits will be all you need to knock off the last vampire or diffuse that last bomb within the time limit. Thankfully, there’s also a “Chillout Mode”, which prevents you from dying directly from attacks, making for a far less stressful experience.

One glaring issue though, is just how easy it is to slip and accidentally shoot hostages, which forces you to start over, in the same way an expiring clock or untimely death would. Hostages are often a disaster waiting to happen; they can occasionally be obstructed from view, and it doesn’t help that they’re killed in one hit. Even if they’re in plain sight, it can be easy to neglect them in the heat of a firefight. They can take friendly fire all too easily since they’re usually in the crosshairs of nearby vampires, who act as an unreliable barrier between a hostage and a shotgun shell. I found myself failing missions for this reason far more than by dying or running out of time. Is this a game-breaking mechanic? Certainly not. But it does slow the otherwise exciting pace of the game, and cripples the satisfying action-shooter gameplay as you try to dance through this minefield. 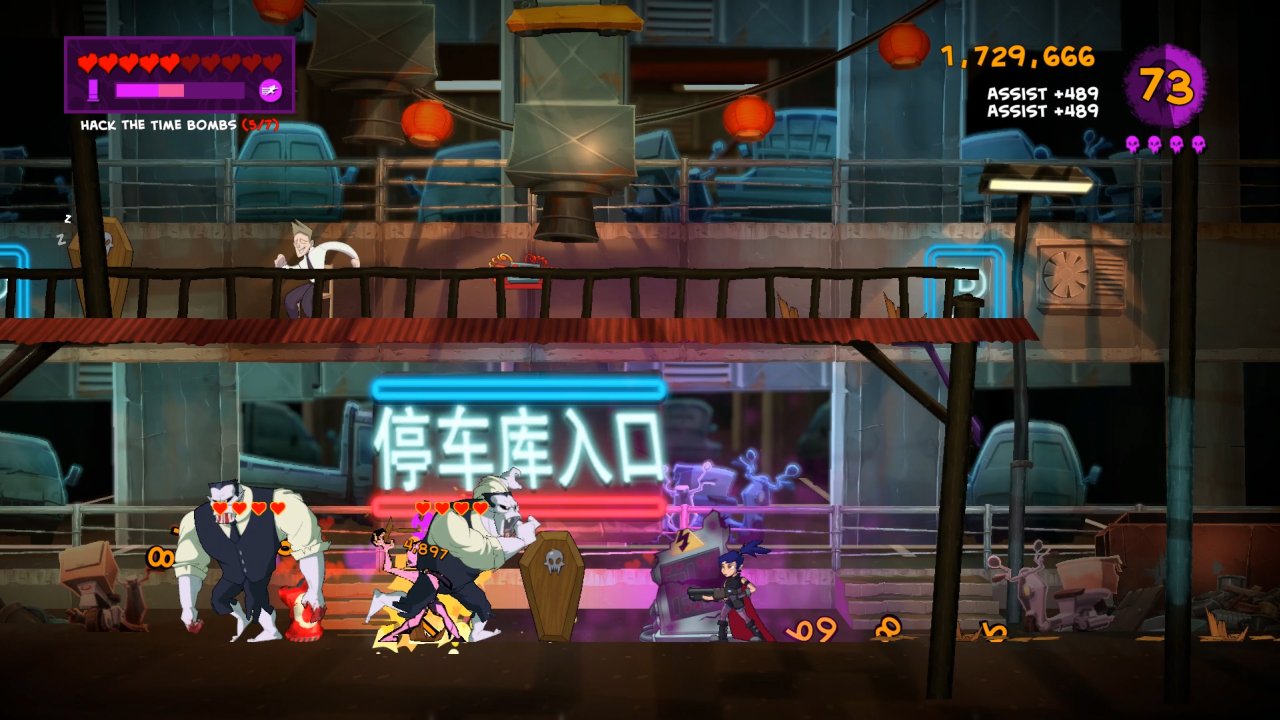 Still, Damsel seems to stress precision as much as it demands speed and firepower. With that considered, it does prove to be a fun and well-crafted shooting platformer once you’ve gotten the hang of the occasional frustrating quirks. The run and gun mechanics are simple enough to jump into, but the obstacles sprinkled about keep you on your toes and make things more exciting. Damsel feels familiar enough, but also infuses a unique style and character, thanks mostly to its fun vampiric themes and neat comic-book aesthetic. A $20 price tag for an experience that can feel a bit “mobile game-y” is somewhat steep. Still, it’s worth a look if wacky action platformers are your thing.

Our ratings for Damsel on PC out of 100 (Ratings FAQ)
Presentation
70
The visuals don’t dazzle on a technological level, but the cartoony aesthetics mixed with the gothic themes make for an amusing backdrop. This is further enriched by the 80’s action-tinged electronic soundtrack.
Gameplay
67
A bit shallow, but the variance in tasks thrown at you keeps things interesting and provides some thrills. The mechanics feel solid enough, yet the physics can feel a touch janky. Could have benefited with emphasis on upgrades, powerups, etc, and by adding some safeguards against killing vulnerable hostages.
Single Player
70
The vampire soft drink premise and comic strip cutscene stills are basic yet effective in drawing you in. The campaign is light on content, but the emphasis on speed runs and high scores beckon you back for repeat playthroughs.
Multiplayer
NR
None
Performance
85
No glaring issues here, everything ran smoothly for the most part.
Overall
68
Damsel manages to be a competent action platformer that speedrun enthusiasts and leaderboard junkies should get a kick out of, but it achieves little beyond this. The constant dashing around while shooting vampires proves fun in short bursts, but doesn't have a ton of longevity.