Heart comes through for this odd fantasy sci-fi quest

The Greater Good surprised me. A low-poly, occasionally rigid hybrid between The Lord of the Rings and the Halo series that seemed ever to be nudging toward something great, my initial response to Sam Enright's inventive RPG was to wonder if it'd end up winning me over. It's something of a relief to say that my apprehension was blitzed within the game's opening hour. Not only is it refreshing, well-judged and consistently entertaining, it's one of those rare RPG's that manages to save its technical stutters and repetitive combat systems by way of an entirely beguiling story. 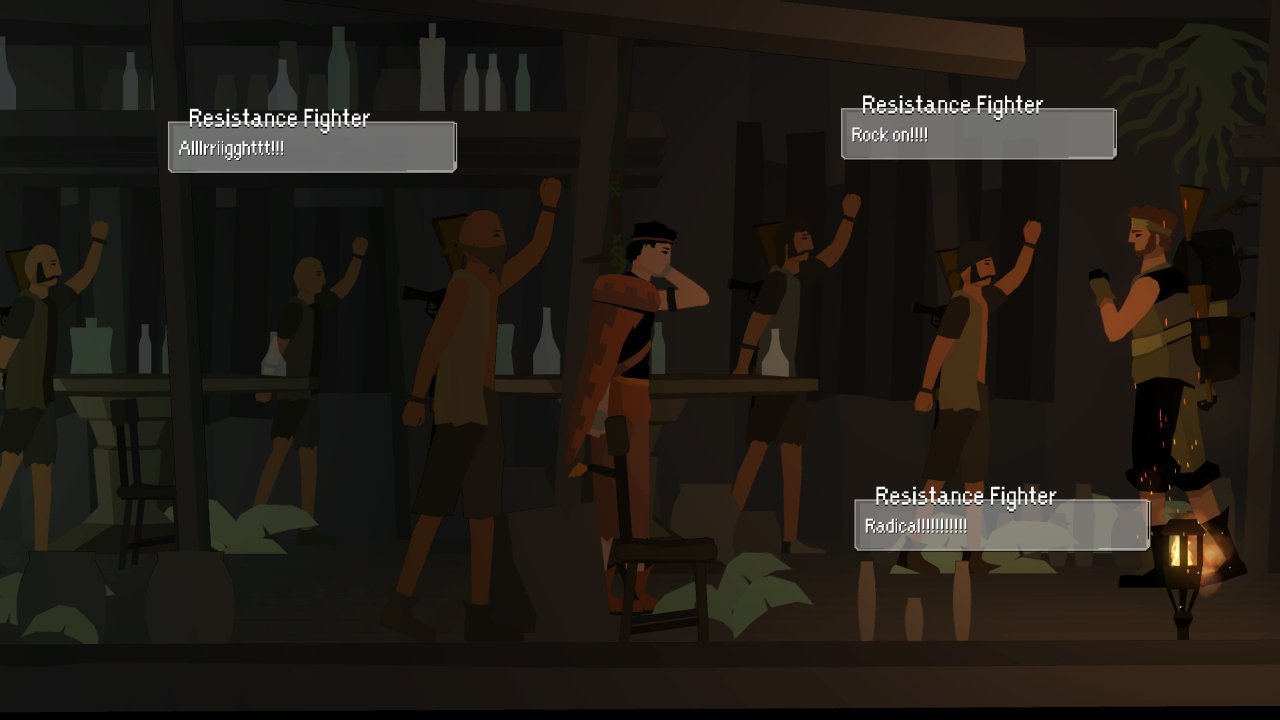 You play as Flint: a uniformed recruit of a team of whimsical marine knights on an unknown mission to scope out a resistance hold in the heart of a mysterious forest. Things are taciturn, gruff and slightly silly in the way early 2000s action flicks were, but the more notable connection is probably the lovingly dorkish homage that was Red vs. Blue.

The lack of info given you about the mission's aim by crowned, and ever-so-slightly Sauron-like commander-in-chief, King Kro, doesn't do much to instil confidence, but the lowly recruit you are, your job is simply to follow orders. The science-fictioning blends more with occult territory once you uncover the cause of your foreboding, though. Turns out it's the resting place of an archaic demon of death, who has been summoned by your trusted King for reasons not quite clear, after which discovery you're promptly sacrificed.

But wait! Another plot-twist is a-go, for the lowly Flint is actually an elemental: a being with the special ability to command earthly forces in his favour. After evading death, you awake in a quirky, parochial old village, where it quickly transpires you've been saved by the very resistance members you were previously sent to neutralise. Betrayed and disillusioned with your prior duty, you're taken in by the faction, and agree to help their cause to repay them for saving your life.

That The Greater Good takes a considerable amount of gearing-up is unsurprising given how lore-heavy the genre can be, but it does a commendable job at keeping things interesting. Hence the reason I'd consider recommending even to those who aren't huge on turn-based systems, because while combat is certainly turn-based here, story is often so adroitly woven into combat arenas and character dialogue that it's uncommon for fight sequences to read as repetitive, despite never evolving much. 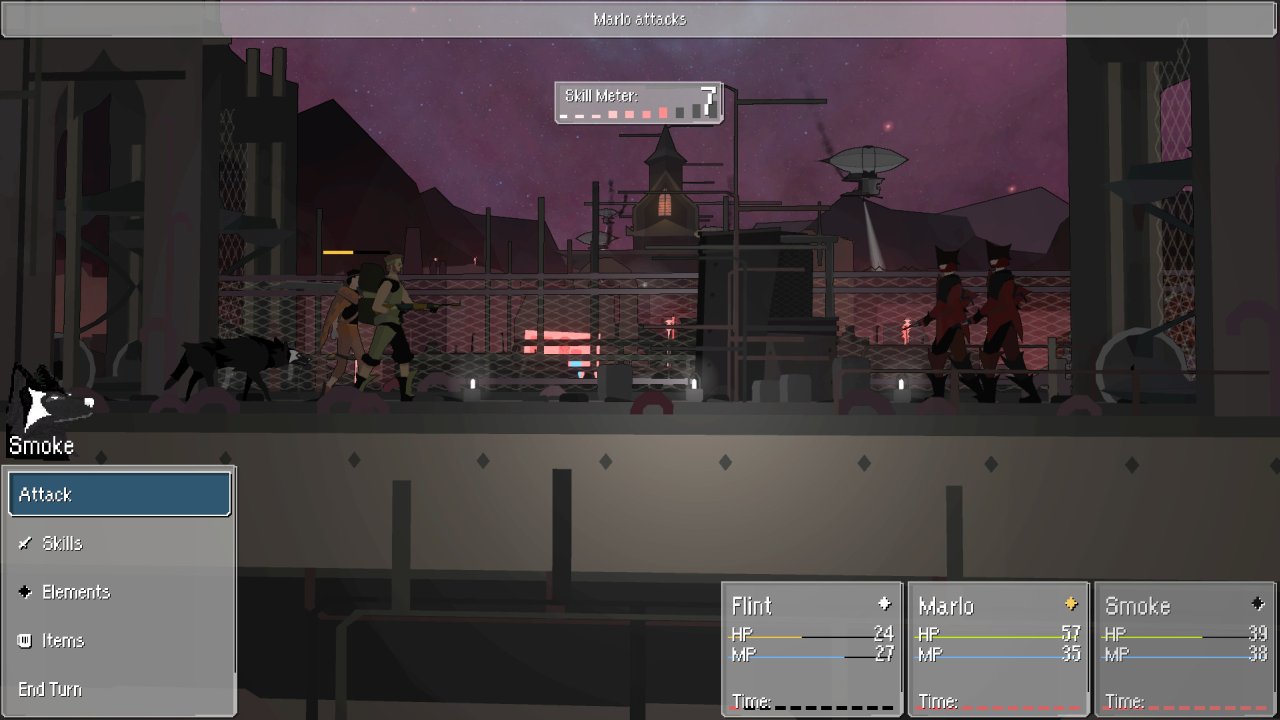 That's helped in large part by the abundant sense of personality running through the game's world. It's rife with the sort of goofball humour and brushes with the whimsical you'd expect to find in seminal classics like The Secret of Mana or Chrono Trigger, though with a science-fiction twist that gives the bizarre impression of a fantasy-fused Halo. I never thought I'd say it, but it's appealing, levelling tech with magic in ways that evoke The Empire Strikes Back. Only here, Yoda's a hysterical old man with an overbearing grandson and a semi-demonic cow. Well...a hysterical human old man, then.

In terms of combat, things are pretty rudimentary, which given its commitment to ensuring the story keeps flowing through all aspects of the game, that fighting is simple enough to give dialogue exchanges and dramatic moments their stage-time is a welcome decision.

Your two main attacks are divided into melee attacks and 'skills'. While your melee attacks have a charge function (allowing you to deliver a potential critical blow after landing a certain number of successful hits), skills might allow you to deliver special super-attacks or conjure defensive shields. Those require MP, which can be refilled using consumable items from your inventory. Meanwhile, you can use your elemental abilities on a minimal basis, which can lend a grateful hand toward the last leg of a tough battle.

You'll pick up new party members as the story progresses, each of whom possess specific abilities to provide extra support such as healing or delivering hefty lightning beams. They're particularly useful during compulsory boss stages, whose multi-tiered nature entertain that oh-so subjective grey area between comfortably challenging, and head-poundingly frustrating. Things do tend toward the side of comfort more often than not, though.

It also does that thing I'd always appreciated about Earthbound, in that enemies appear on the map as you explore, meaning you can avoid standard encounters if you're running short on time or don't fancy grinding.

I suppose I'd exercise caution if you're big on comprehensive systems and strategic play, because there's really very little required in The Greater Good. It's also instantly apparent that combat is the heart of the gameplay; though puzzling and light platforming make occasional appearances, they're frustratingly pulled down by rigid controls. 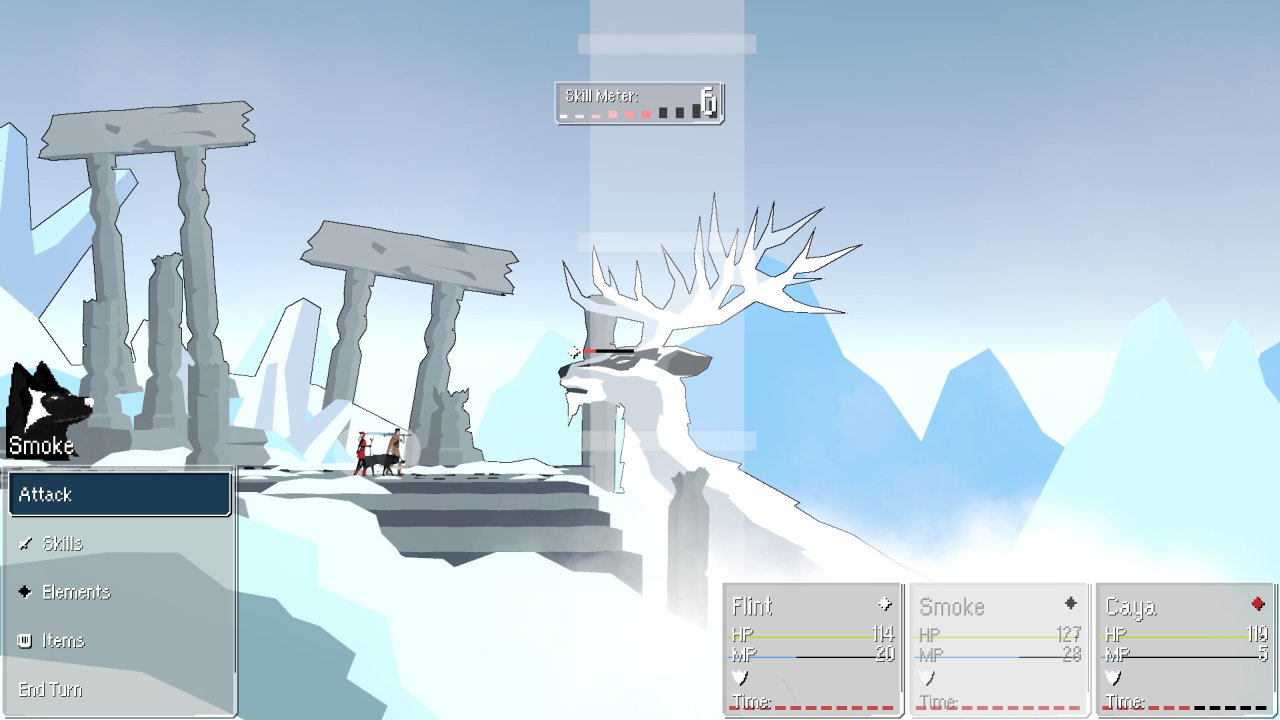 But I can't recommend enough that those considering a playthrough at least give it a chance, just to see if they aren't won over by the journey of its protagonist. Flint might've been brought up as a cold, gun-toting marine, but as he gradually develops into a semi-magical resistance leader, it's difficult to see the protagonist as anything other than preciously naive. Candid confessions, odd dream sequences and struggles with good and bad all contribute wonderfully to a troubled and empathetic protagonist, whose inner struggle comes across as one of the sincerest I've experienced in a recent game.

And that sincerity invariably saves scenarios that risk being read off as ridiculous goofball segments. From an encounter with a cow who wants nothing more than to harvest the souls of all she deems inferior, to the precious fact that your protagonist wears a nametag in his armour, it's the distinctly childlike tone with which all are presented that makes The Greater Good as much a gentle tribute to the genre it inhabits as its own, peculiar beast.

If you select your RPG's on the grounds of beefy systems or intense strategy, there's quite a big chance you won't be impressed by The Greater Good. But I'd hesitate to advise against it, simply because it's so darn innocent. Though it probably won't stay with you in the way Chrono Trigger, Secret of Mana or the Halo games upon which it's partially inspired might have, its weird blend of science fiction and fantasy comprises a surprising and unavoidably endearing few hours of simplistic RPG storytelling. Most surprisingly, it's personable enough to transgress its technical unpolish, which is just as well, as they're amongst the only issues that really have the power to hold its enchanting world back.

Our ratings for The Greater Good on PC out of 100 (Ratings FAQ)
Presentation
70
The low poly sidescrolling style leans more toward modern minimalism than retro-tribute, and its eclectic collection of sci-fi, fantasy and occult influences grants The Greater Good ample opportunity to toy with its whimsical world in several bizarre, often surprising ways.
Gameplay
72
Slightly rigid controls aside, the straightforward combat functions more as an interactive conduit for an entertaining story, though bosses do a grand job of keeping challenge level up.
Single Player
79
The story is drenched in that childlike sense of humour we remember from Chrono Trigger and The Secret of Manna, yet with welcome cues taken from Red vs. Blue and The Empire Strikes Back to create a quest as refreshingly weird as it is surprisingly human.
Multiplayer
NR
None
Performance
(Show PC Specs)
CPU: Intel Core i7-4710HQ @ 2.5ghz
GPU: Nvidia GeForce GTX 860M
RAM: 8GB
OS: Windows 10 64 bit

80
The controls are probably the most glaring technical issue, but even then, they're not game breaking. Aside from that, things run smoothly.
Overall
74
The Greater Good may not appeal to those scouting for intense systems, strategic play or hefty challenges, but like it did me, it just might win you over in spite of its technical hitches.