Spyro is back and better than ever

Remastering a beloved trilogy of games is a burdensome task. Change too little and you run the risk of exposing how poorly the games have aged. Change too much and you alienate fans by distancing the newly polished products from the nostalgic originals. The Spyro Reignited Trilogy rides a fine line to get the best of both worlds: it succeeds spectacularly in faithfully recreating the original Spyro trilogy while getting rid of the graphical and mechanical hurdles that had to be overcome while playing the nearly decades-old originals. It's a fantastic way for newcomers to experience a great trilogy of PlayStation platformer classics for the first time, while also being an excellent excuse for fans to revisit their heartfelt favorites. 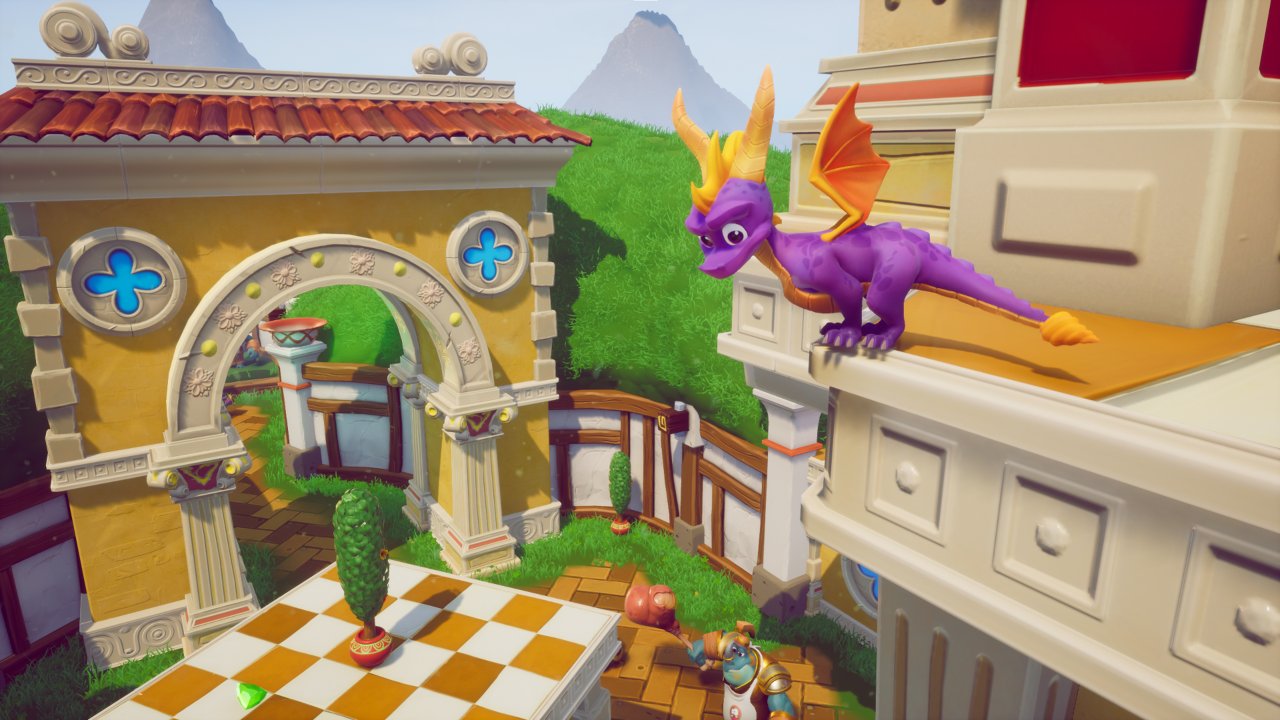 The Spyro Reignited Trilogy follows in Crash's footsteps by putting the purple dragon's first three outings (Spyro the Dragon, Spyro 2: Ripto's Rage! and Spyro: Year of the Dragon) into a single package with complete graphical overhauls and minor gameplay and accessibility tweaks. Other than that, these games are largely the same as their PlayStation counterparts which is both a good thing and a bad thing: good because all three original Spyro games are great adventure platformers that all still hold up today, bad because the sometimes sparse and confusingly cryptic levels stick out like a sore thumb. Toys for Bob's stringent adherence to the original level design is both a blessing and a curse. They didn't have to come up with entirely new levels because most of what's there is already excellent, but the poorest levels are made even worse because they haven't aged well. Thankfully, those weaker levels are largely isolated to the first Spyro game which has a few hidden areas that are near impossible to spot by just exploring. However, it remains impressive how so much of all three original Spyro entries remains thoroughly enjoyable, even in contemporary context.

While all three Spyro games largely play the same as they did eighteen years ago, they've aged surprisingly well. The games' open world hubs are limited in scope and the levels don't dazzle with dizzying set pieces, but the moment to moment gameplay is incredibly strong. You'll spend most of your time running around hub areas and exploring segregated levels while collecting gems and various MacGuffins to progress. It isn't anything new or novel, but it's an incredibly tight experience. Everything moves along at a satisfying clip, each new level is begging to be completed and conquered, and the tight controls make the simple act of traversing the locales enjoyable. You won't spend much longer than half an hour in each of the levels, even while going for 100% completion, so you're constantly being spoiled with new activities, enemies, areas, and challenges that almost never overstay their welcome. It's a breath of fresh air compared to the asset reuse that's rampant in today's open world behemoths.

Toys for Bob has taken some creative liberties to try and help these old games feel new again, and nearly every change they've made pays off. In a small but welcome change, they've integrated the dragonfly companion Sparx's treasure-tracking ability into the first Spyro game which was initially only present in Ripto's Rage and Year of the Dragon which alleviates some of the frustration that arises while trying to find the last few hidden gems in the first game's more cryptic levels. You can also immediately fast travel to any level or hub area from the pause menu in all three remastered titles, which is an immense quality of life feature that completely cuts out the needless navigation that would otherwise come at the end of each level. The pause menu allows you to toggle on a mini-map for each area that lets you see an entire level's layout and your position on it. All of these are tiny tweaks that are intelligently implemented: each one is optional or unobtrusive so it's still entirely possible to experience everything the way it was, but the accessibility options are there for those who want a more frictionless experience. 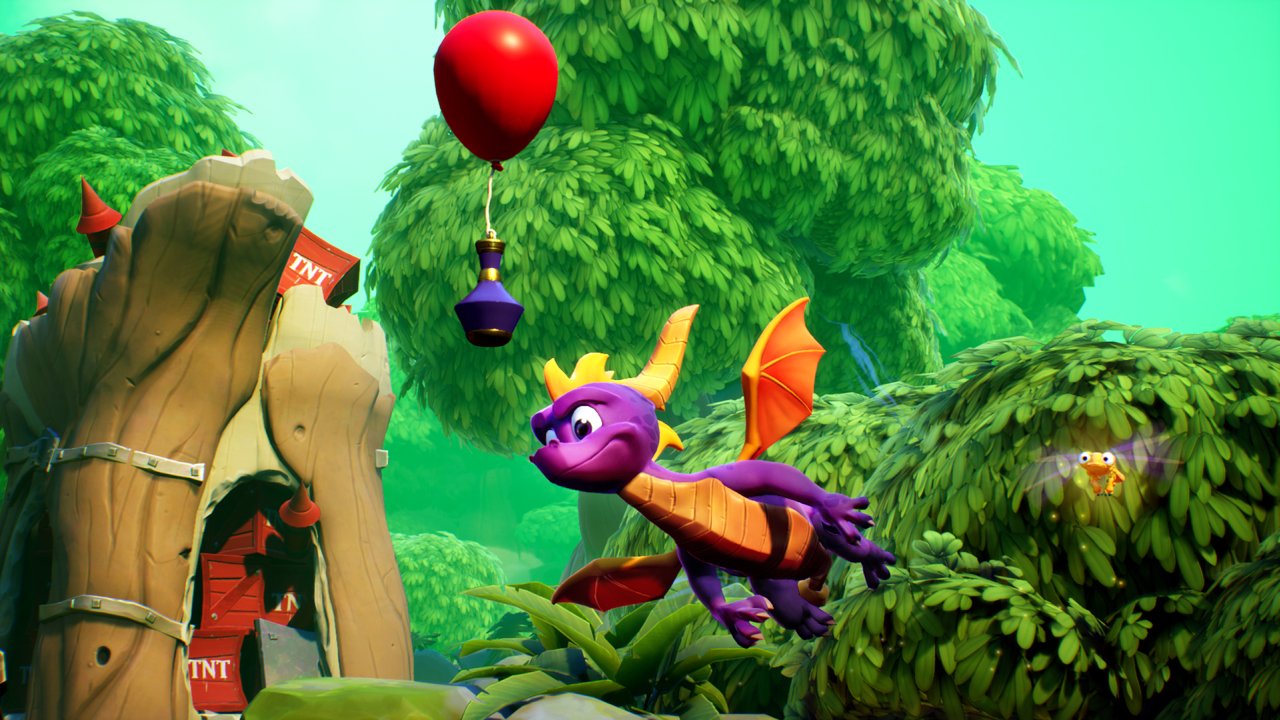 The Spyro Reignited Trilogy's visuals have seen an immense overhaul, but they still maintain and even enhance the tone and charm of the originals. The vibrant colors pop, the improved character models exude personality, and the newly-added animations entice and entertain. Unreal Engine was an excellent choice for Spyro's diverse color palette. Gone are the muddy polygons and low draw distances of yore – in their place are sweeping vistas and detailed textures that feel strikingly authentic. It all looks great, and it's all quintessentially Spyro. The only major downside is the abhorrently aggressive motion blur which obscures your peripheral vision whenever things get frantic. Performance can also take the occasional hit when lots of particle effects are happening simultaneously, but such instances are few and far between.

Despite having ridiculous levels of polish in the graphics and gameplay departments, the Spyro Reignited Trilogy can still feel a bit rough around the edges. There are lots of small things that just don't seem right: loading times are abysmally long which puts a damper on the otherwise snappy pacing, the opening menu is bland and barren especially when compared to its Crash trilogy cousin, certain UI elements feel a bit off like a giant indicator that appears in the bottom corner of the screen when you acquire a key, and the pre-rendered cutscenes look a bit too soft around the edges and aren't as detailed as they could have been. Spyro 3 has some really bad camera issues in specific instances, and there's a complete lack of subtitles for cutscenes which is completely unforgivable. These issues are admittedly trivial in most circumstances, but they all stand out in a package that otherwise exhibits superb attention to detail.

If there's one area in which Toys for Bob overstepped their bounds, it's with the music. Stewart Copeland lent his talents to the original soundtracks which were superb and packed with variety. The bouncy melodies and rhythmic beats of the menu and boss music contrast nicely with the more serene and dream-like nature of the hub world tracks. By completely remaking all the music, Toys for Bob only succeeded in making a set of near perfect soundtracks worse. The remastered music feels significantly more understated, regardless of whether the option for dynamic music is disabled, which causes the music to feel like it's a part of the background scenery rather than being an integral part of the Spyro formula. It just doesn't feel right to be bashing jars, flaming enemies, and gliding between platforms without the bombastic tunes playing in the background. Thankfully, you have the option to switch to the original music right from the pause menu. It's great to have the option, but there's no doubting that too much effort went into remaking a soundtrack that didn't need it. 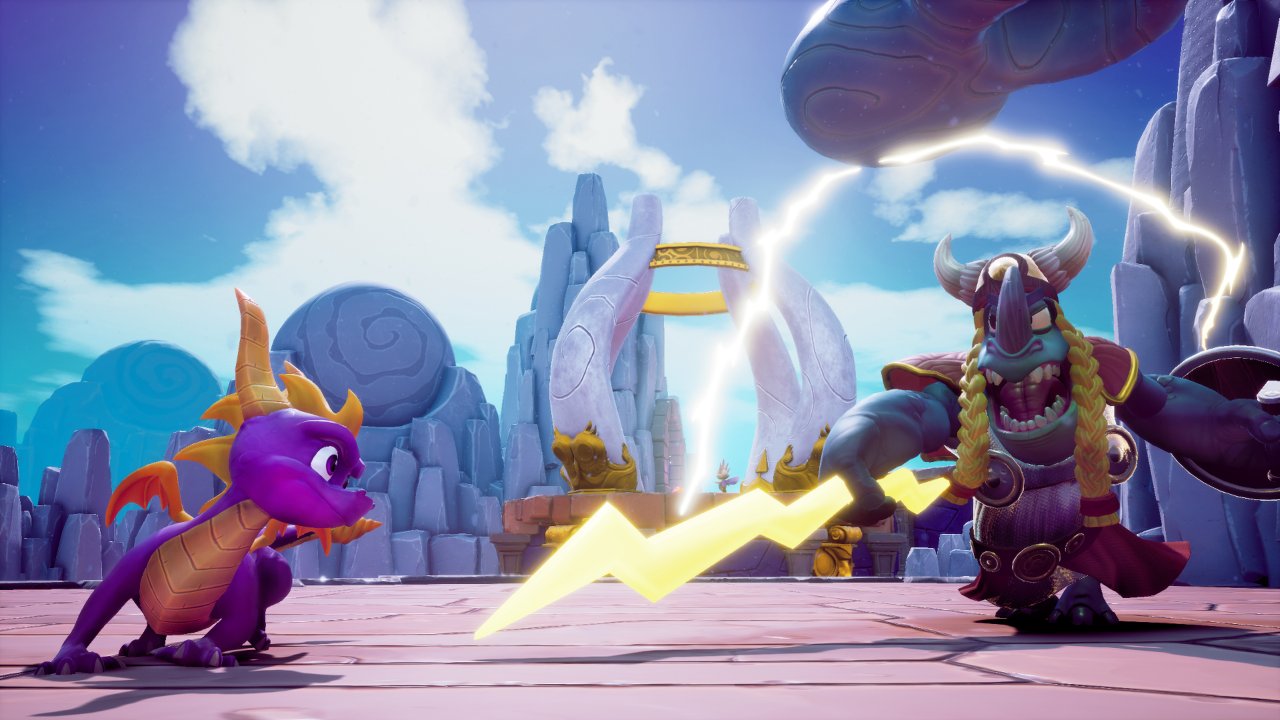 At the end of the day, the Spyro Reignited Trilogy is largely a fresh coat of paint on some great original PlayStation games, but having all three games in one place allows more people to appreciate each entry in context. The first game is extremely simple, but it laid the groundwork for the truly spectacular Ripto's Rage which wouldn't exist without it. It's awesome to witness how Spyro 2 birthed the characters and concepts that continue to be associated with the franchise today, and it's enjoyable to recognize how Spyro 3 combined aspects of both previous games to create something unique while frequently calling back to its predecessors. The first three Spyro games are loved by many, and they are touted as some of the greatest 3D platformers ever created – the Spyro Reignited Trilogy makes it easy to understand why.

Our ratings for Spyro Reignited Trilogy on PlayStation 4 out of 100 (Ratings FAQ)
Presentation
80
The variety of vibrant color palettes and fluid animations make the Spyro remasters a feast for the eyes whenever motion blur isn't getting in the way. However, there are some rough spots like a bland title menu and unattractive UI.
Gameplay
88
The first three Spyro games play spectacularly well and this trilogy doesn't change that. The immense variety of activities and collectibles are made even better with accessibility enhancements, and the steady pace prevents the weaker moments from hampering the experience.
Single Player
85
There are three entire Spyro games to be enjoyed here. While they're not challenging at all, they provide a satisfying albeit simple completion loop that remains entertaining throughout each entry.
Multiplayer
NR
None
Performance
68
The game targets a steady 30 frames per second, but only attains that target most of the time – expect to experience occasional slowdown. I did not encounter any game-hindering or sequence-breaking glitches in any of my three 100% playthroughs.
Overall
81
Spyro Reignited Trilogy is a great way to experience a fantastic collection of games. Accessibility tweaks and small additions make this the definitive way to play the original trilogy regardless of whether you're experiencing it for the first time or revisiting one of your favorites. 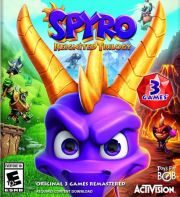