Just when you thought this party was losing steam...

When it comes to the Mario Party series, Nintendo’s premiere party franchise has certainly seen its ups and downs. While the N64 days brought with them 3 mostly stellar titles, the quality of the series began to decline during the GameCube and Wii eras, hinging on weird gimmicks like the microphone functionality. By the time the mediocre 10th home console installment hit on the Wii U, it was a general consensus that the party had officially died. 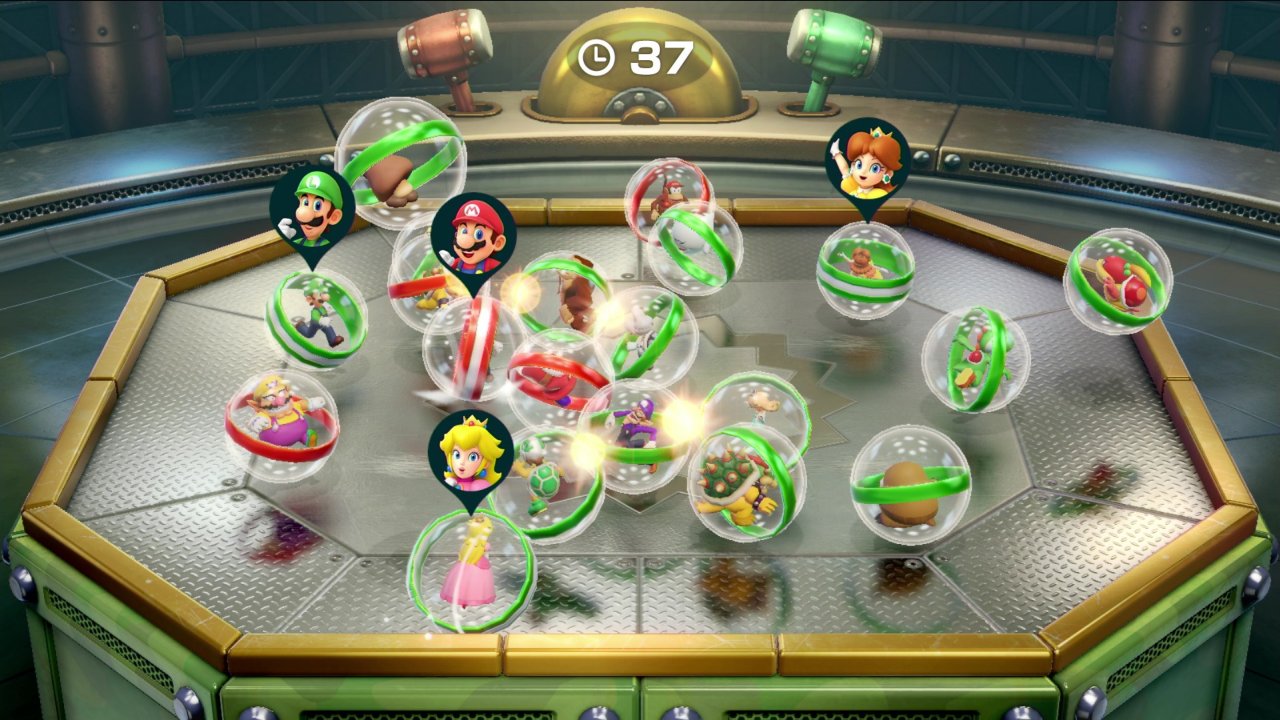 But with a fresh console comes a fresh take on the series, and one of the surprisingly strongest entries in several years. With Super Mario Party, Nintendo has managed to revitalize the gameplay, which had begun to feel played out and cheap, while rekindling that easy-going and fun spirit the Mario Party series is known for. Nintendo has achieved this by tweaking elements that didn’t quite work in the past, and dialing back convoluted areas here and there while bombarding the gamer with a wealth of content. A key distinction is that things seem to flow more smoothly in general, with minor tweaks such as a unified character selection screen right at the start of entering the in-game “hub”. The practice mode is also now allocated to the rules menu, allowing you to multitask seamlessly and cut back on time.

The source of the game’s major improvements come from a few key areas; the return to the old school board game mechanics, the introduction of (mostly) interesting new modes along with tons of charming new minigames, and the inclusion of online play. The former is more of a case of addition by subtraction, as the boring, cumbersome feature of a singular vehicle controlling all players in a board game has been ditched, along with the mini stars. Instead, we’ve returned to the tried-and-true system of each player moving independently, earning coins, and purchasing stars at allocated Toad spaces. The primary “hook” which the board games revolve around this time are specialized character dice, which hold specific numbers, as well as minor coin payouts.

The dice blocks are the key component of strategy and customization throughout the board games, which otherwise can be pretty simplistic and generally lack depth in their layout. These individualized blocks are assigned depending on which character you use, but you can also obtain them by running into “allies” throughout, which adds more variety to your moves. The dice essentially all carry pros and cons in terms of number of moves and coins awarded; some come with an abundance of larger/smaller numbers, some offer more risk along with reward, while others contain a safer array of rolls.

For instance, the Mario block gives you a 50% chance to roll a 3, while a Hammer Bro block is more “all or nothing”, as it contains only 1’s, 5’s, and a chance to earn 3 coins. Items are dialed back a bit in terms of their crazy gimmicks, focusing mainly on obtaining coins and strategic moves on the board. Unlike the last two Mario Party titles with their singular vehicles, these features bring back a welcome element of individual strategy, which is just enough to be interesting without being too convoluted. 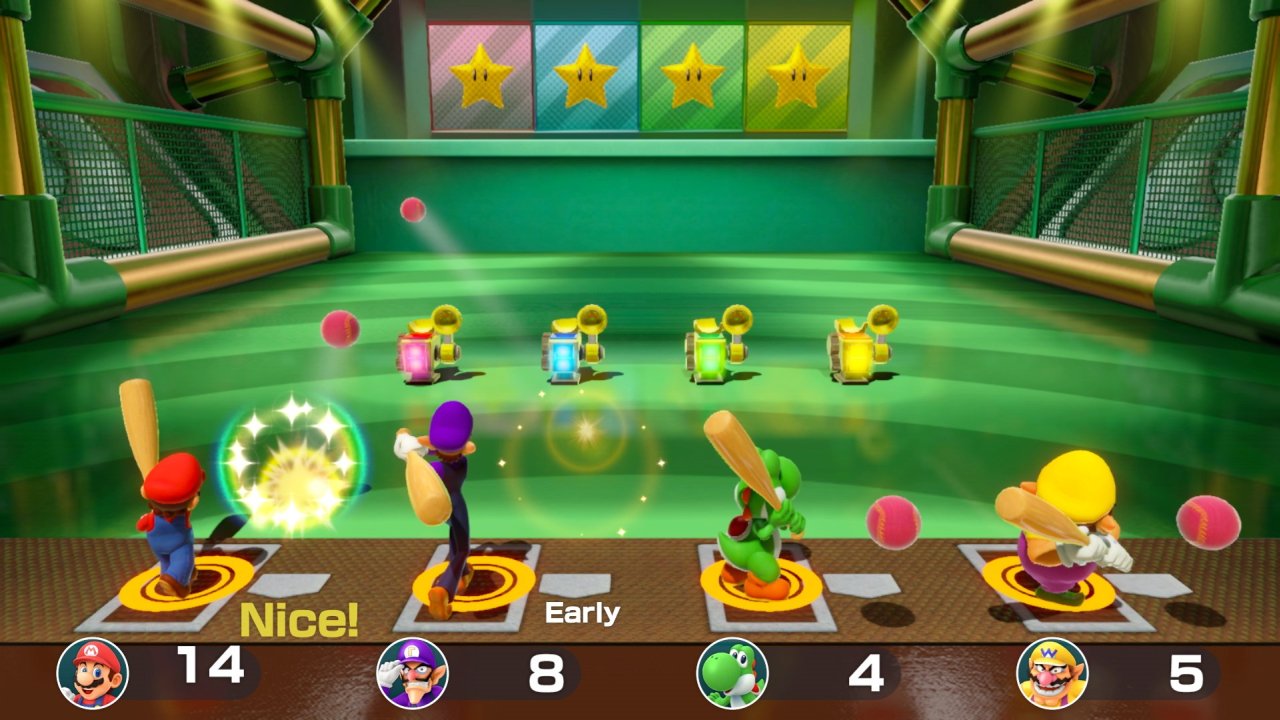 This nice balance of simplicity and depth characterizes most of the minigames themselves. The controls often rely merely on mimicking movements via motion control or joystick movement coupled with the usage of a single button, yet precision and/or speed is usually rewarded. Still, some of these bite-sized games verge on feeling a touch too simplistic and watered down. Nonetheless, Nintendo certainly makes up for it in sheer quantity, with a whopping 80 minigames, along with the inclusion of other mostly enjoyable game modes. These include “Toad’s Rec Room”, which focus on team games, like the basic but surprisingly fun Mini League Baseball. A few of these Toad games also showcase the Switch’s ability to combine multiple screens, including the sort of virtual puzzle “Banana Split”, and the satisfying tank shooter, Shell Shocked Deluxe.

There’s even a section of rhythm-only minigames, which play a bit like the offspring of WarioWare and Rhythm Heaven, focusing on tapping buttons at timed beats. There’s the unique Partner Party mode, where teams face off in 2 vs 2 minigames while gathering coins on a free-roaming game board. This offers an interesting new dynamic to the board games and makes for some exciting competitive romps. There’s also my personal favorite; a co-op rafting game mode which requires you to quickly rattle off minigames together in order to paddle your way down the river in the allotted time.

There are a few odd limitations in some areas though, including the measly four board games offered - which themselves are pretty simplistic. There’s also the wise inclusion of a convenient tournament-style Mariothon, which measures your score by how quickly you win. Yet this comes with a disappointingly small portion of the minigames available. This limited feature extends to the online mode, which, while both functional and fun, can get old rather quickly after playing the same handful of pre-determined minigames. Still, it’s nice to finally have an online feature at all in a Mario Party game, especially one that contains a bit of depth with a ranking system, leaderboards, and rewards in the form of displayable stickers.

In an effort to make Super Mario Party somewhat interesting for a solo player as well, you can unlock a mode called “Challenge Road,” which is about the closest the game gets to a single player campaign. Throughout this journey, you make your way across a world map with dozens of nodes, each containing a different minigame which you must complete within various parameters or conditions. You may, for instance, need to collect a certain amount of coins, play with a CPU controlled partner, or finish a game within a certain time limit. This experience helps bring an additional dimension of fun to the minigames, though it still doesn’t beat the thrilling competitive spirit and the laughs provided by playing with friends. 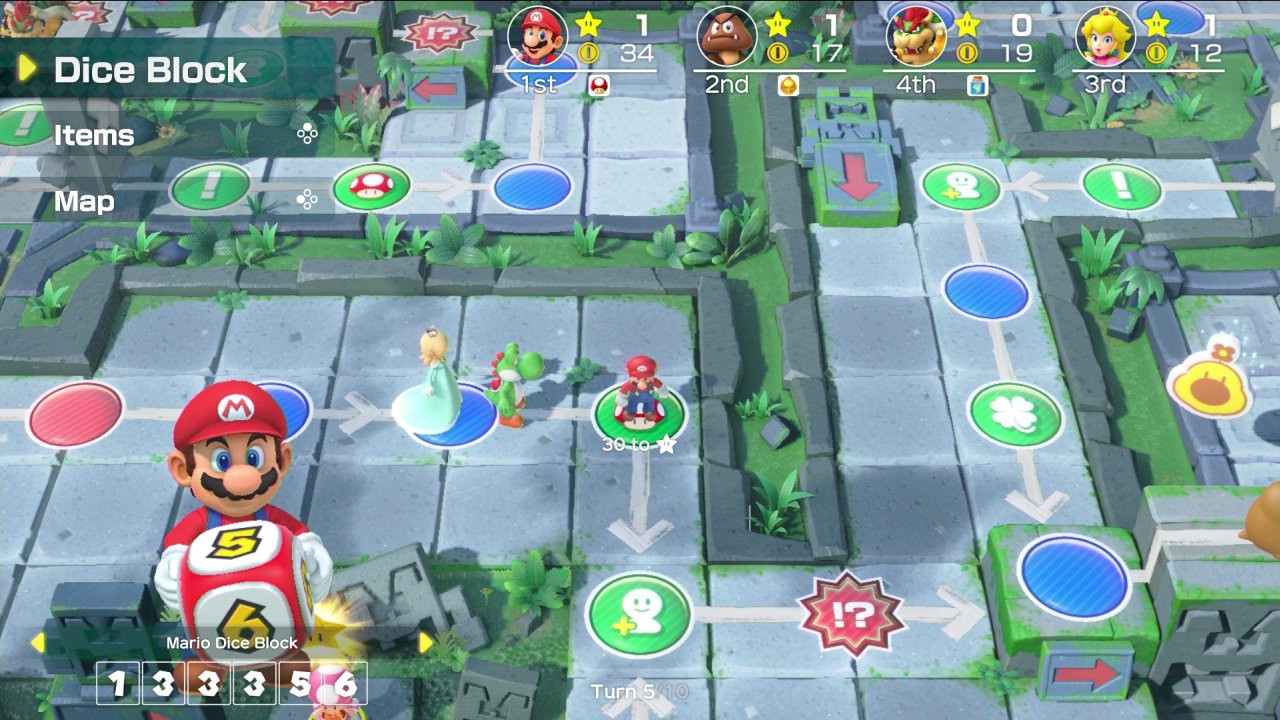 The minigames themselves are a mixed bag, but I can safely say that I enjoyed a large chunk of the 80 that are included. The duds usually consisted of games that involved passive acts like pointing to a hidden item shuffled around, counting the number of toads running around a train, or other tasks that favored quiz-like mechanics over action. There were also a few that hinged too heavily on the occasionally spotty motion control. These include a basic racing romp where you must rotate your Joy-Con as you simulate riding a tiny tricycle, and a game where you must evenly cook a square of meat by gingerly flipping a pan. To its credit though, the latter game in particular does showcase the HD rumble quite impressively. In fact, this subtle rumble is well implemented and feels nice in many of the games, adding a degree of tactility.

Much of the 1 vs 3 content keeps up the Mario Party tradition of feeling rather unbalanced, though the co-op and 2 vs 2 games were usually a blast, like the soccer game, Just For Kicks. For the most part though, the free-for-all romps are still where it’s at. Favorites on this front include a game where you scramble to get into a photo shoot while hilariously smacking other players around to impede their progress. There’s also Bumper Brawl, an amusing spiritual successor to the classic Bumper Balls; and the Overcooked-esque Dash and Dine.

Overall, Super Mario Party is a major improvement after the last handful of titles in the series, and Nintendo’s managed to simplify the right areas, while implementing interesting and fun new concepts as well. There are a few weaknesses lurking beneath the surface, mostly in the form of limitations, such as the required use of a single Joy-Con to play, the lack of extensive online options, and few board games to choose from. Yet, there is enough variety and enjoyable content to the point where these blemishes rarely stand out. One area where the series has certainly never been better is its aesthetics. The slick, colorful visuals are a joy to look at and help enhance the experience, along with the realistic HD rumble feedback. Between its graphic overhaul, online functionality, and tons of gameplay options, Super Mario Party is one of the strongest, most comprehensive entries in the franchise to date and the just might be the best since the early GameCube days.

Our ratings for Super Mario Party on Switch out of 100 (Ratings FAQ)
Presentation
78
The aesthetics aren’t mind blowing, but they’re certainly the prettiest seen in a Mario Party game. The crisp and colorful visuals seem to pop, and the appealing soundtrack is full of bouncy, upbeat melodies to further color the scene and liven things up.
Gameplay
74
A vast array of different types of minigames keeps things interesting. A few verge on being overly simple or convoluted, but most are captivating enough to provide small doses of fun. Additions like character-specific dice and the co-op rafting game provide an interesting new dynamic.
Single Player
67
Like most Mario Party games, the fun factor takes a dip when going solo, though the new Challenge Road helps somewhat in this regard.
Multiplayer
78
The sheer quantity of multiplayer options is second to none. The limitations in the tournament and online modes and lack of board games is a bit disappointing, but there are enough games and features to carry the burden and provide plenty of fun and excitement with friends.
Performance
85
Everything runs very smoothly aside from the rare lag hiccup online.
Overall
75
Super Mario Party manages to return to the roots of the series while sprinkling in some new features and a wealth of diverse content that all but guarantees there will be something for everyone to enjoy. Minigames are usually simple and easy to grasp, while still being enduring.