Adding some color to the platforming genre

One would think the 2D platforming runner might be played out and uninteresting by this point. But developer Space Mace has demonstrated with their new title that sometimes, all it takes is an interesting concept, or better yet - a couple of them working in tandem - to carry the weight and breathe life into the gameplay. 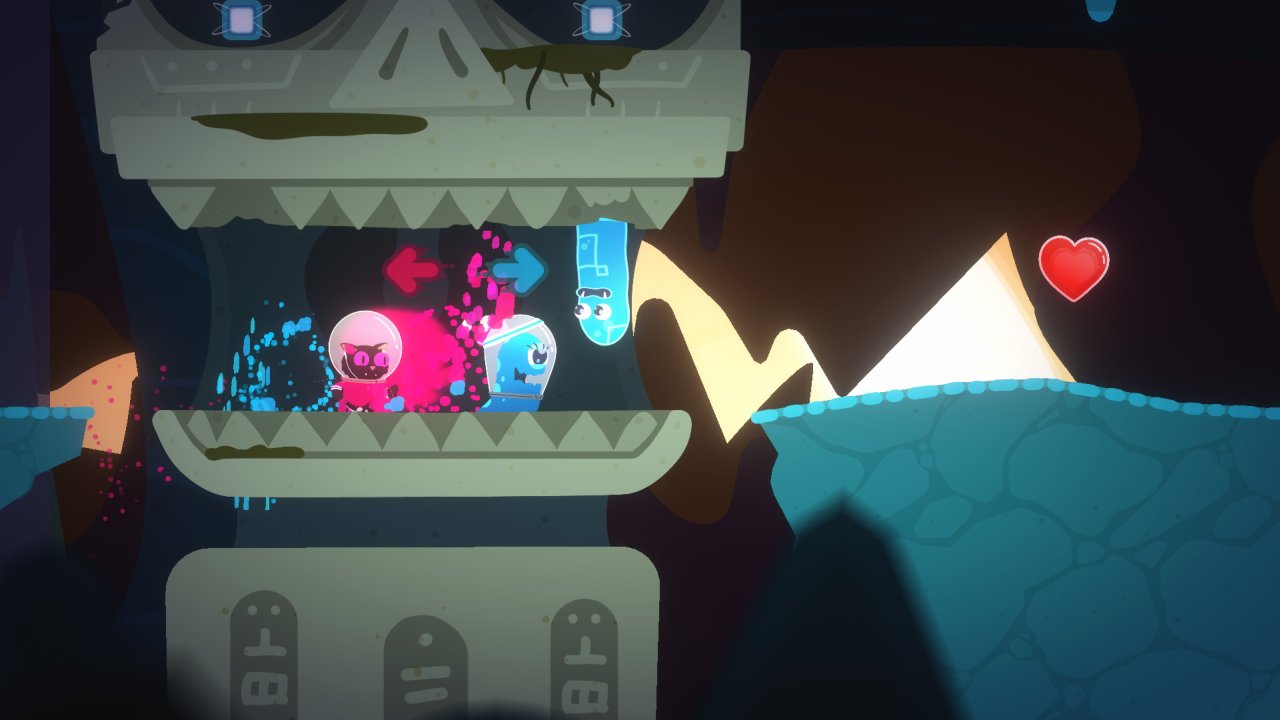 On the surface, Joggernauts plays out like an on-rails runner which you might find on a mobile phone, but spruces up the formula with a New Super Mario Bros vibe of simultaneous 4 player party sensibilities. It invokes the likes of Cuphead and Celeste with its deceptively grueling twitch gameplay disguised with a cute, cartoony aesthetic. Despite some very tough sections, I couldn’t help but be enthralled by the refreshingly new feel this game provides with the relatively unexplored mechanic of working together to clear obstacles through color-matching.

At its core, Joggernauts is a cutesy, 2D platforming manifestation of an exercise in communication, teamwork, and cooperative synchronization. The game utilizes unique concepts and mechanics, and yet, it’s all distilled down to a pretty simplistic essence. You use a mere 2 buttons throughout the duration of the short, 20 plus stage journey. One of these controls your jump, and the other exists as the coup de gras of Joggernauts - the ability to swap places with a partner (or 3). Your avatar automatically chugs its way rightward along a side-scrolling plane at all times, further simplifying the platforming elements.

The name of the game is essentially to clear color-coded baddies, platforms, and objects, using at least 2 characters simultaneously, each of whom are assigned a color. You can either control 2 of them on your own, or divide the duties amongst 2-4 friends. The cartoony creatures you control come with some amusing designs, ranging from astronaut kittens, to slimy one-eyed alien slugs. Once you’ve selected your line-up of critters, you’re tossed into a vibrant, cartoony environment that looks part Super Mario and part cheap flash animation straight out of Newgrounds. As you traverse these stages, you’ll be hopping over pits, leaping onto platforms, avoiding obstacles, and trying to get to the end in one piece. As everything is on rails, it’s all about timing and reaction. The levels are linear, aside from some brief diverging paths which help to break that up a smidgen. Along the way, you can collect orbs that match the color of the player, which are put towards mid level checkpoints, along some harder-to-reach trophies, which unlock bonus stages. 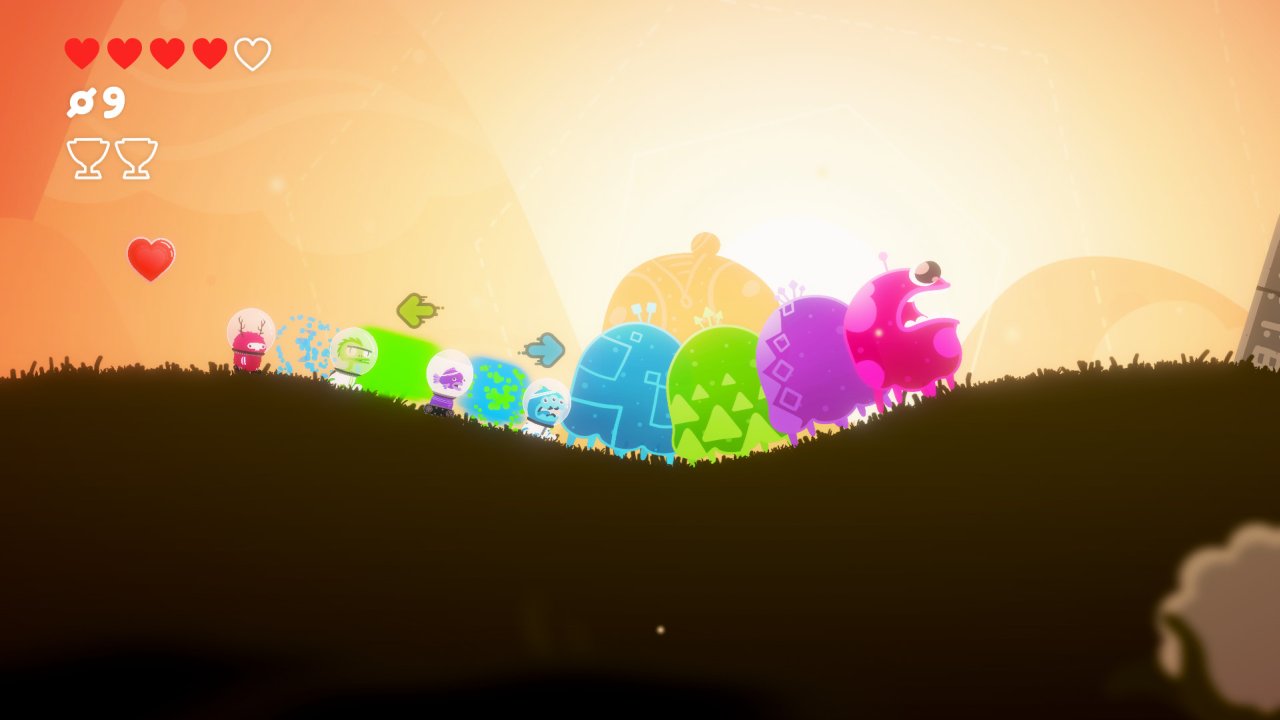 Sounds pretty simple and straightforward, right? Well, here’s the catch - only the character at the front of the line that matches the color of an obstacle can clear it. Otherwise, a heart gets knocked off from your slim health meter, or worse, you’ll abruptly meet your doom by smacking into a wall or plummeting to a swift death. You’re also done for if each of the 2-4 characters die at the same time, or at least before the few seconds it takes to respawn a character. And since you never stop moving, you’ve got to be on your toes and ready to swap a different color player to the front of the line at a moment’s notice.

What looks easy on the surface - a characteristic reinforced by its childlike aesthetic - very quickly escalates into a jarring and grueling platforming experience. This is particularly true when reaching the latter half of the game, which throws colored platforms, wall-controlled levers, and conveyor belts at you like they’re going out of style. Make no mistake, you’ll die frequently. It’s at this point where the game verges on feeling repetitious, as you’ll be replaying stages quite a bit.

Unlike most platformers that tend to take some of the burden off with more players, Joggernauts pretty much inverts this, as things become even more convoluted the more players you have. Even with 2 people, it can be immensely tough to stay on the same page and coordinate your character swaps in real time. But add another 2 into the mix? Forget about it. The game essentially becomes a free-for-all of people shuffling and hopping every which way, often leading to rapid deaths. 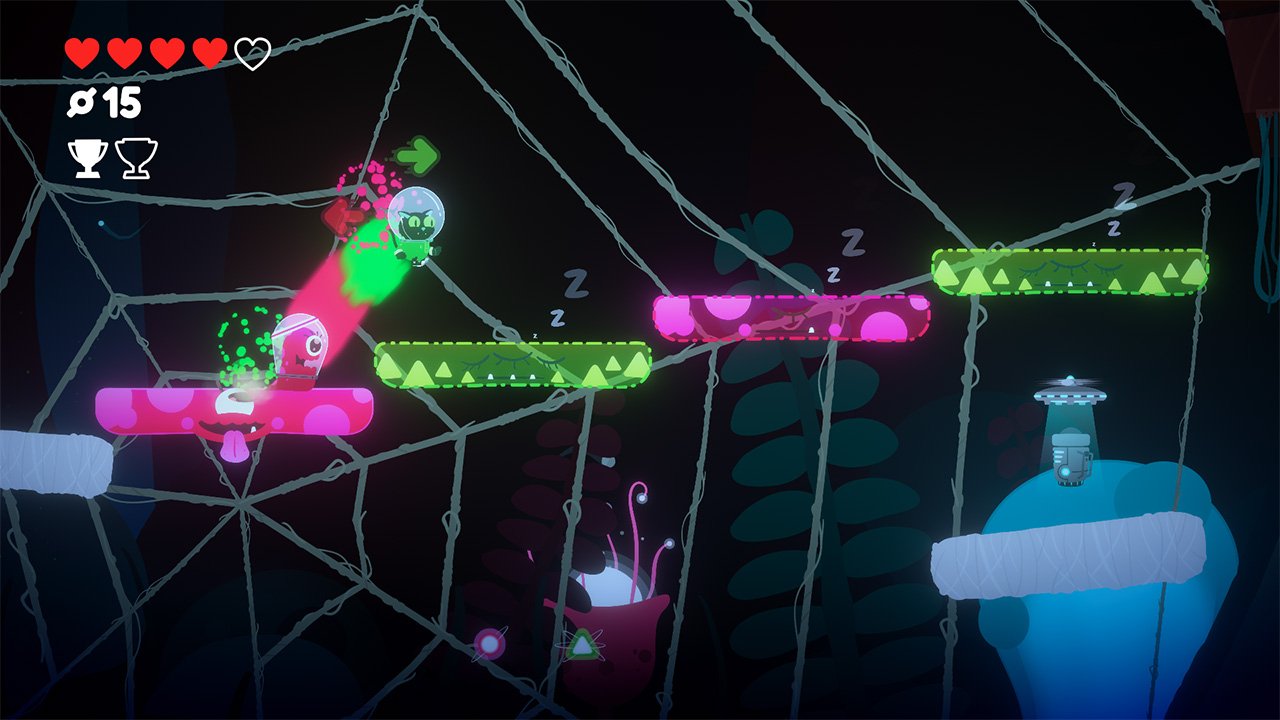 Thankfully, Joggernauts attempts to minimize getting your signals crossed, by relegating the swap ability to only those following the leader, which immediately sends them to the front. Characters also chirp out loud which color is currently leading the charge when switching, which helps a bit. The process is fairly streamlined, yet the potential to misfire or mistime the character swapping is still prominent. This usually occurs when a person doesn’t call an upcoming swap, which can throw the lead player off, and quickly cause a snowball effect of everyone mashing buttons at the wrong time. Thus, most of the communication the game seems to encourage usually devolves into simply “I’m switching! Switching! Switching! Now!”. It certainly makes for some aggravating moments, mostly directed at your friends - because, you just know that collision with the multi-colored caterpillar couldn’t have been your fault! Regardless, the multiplayer romps still prove to stand out as being the most fun and action-laced, and it’s what the game is clearly designed around.

The single player experience, on the other hand, is an entirely different animal. It ditches the communication and coordination aspects, and instead becomes an exercise of juggling multiple tasks. For this, you’ll need to control 2 critters independently, which means the 2 button control scheme suddenly becomes 3, and you’ve also added an additional focal point. Naturally, this presents its own set of challenges, though unlike the multiplayer component, your fate is now completely in your own hands. This allows you to (eventually) overcome even the seemingly most ludicrous obstacles with enough practice.

There are a few modifiers which seem subtle but go a long way in improving the experience. You’re granted the option to customize the pace at which your characters jog in 5 increments, and you can also increase your health as well as checkpoint frequencies. Dialing the speed back to half, or even 3/4ths, suddenly makes the game far easier to absorb and less stress-inducing. 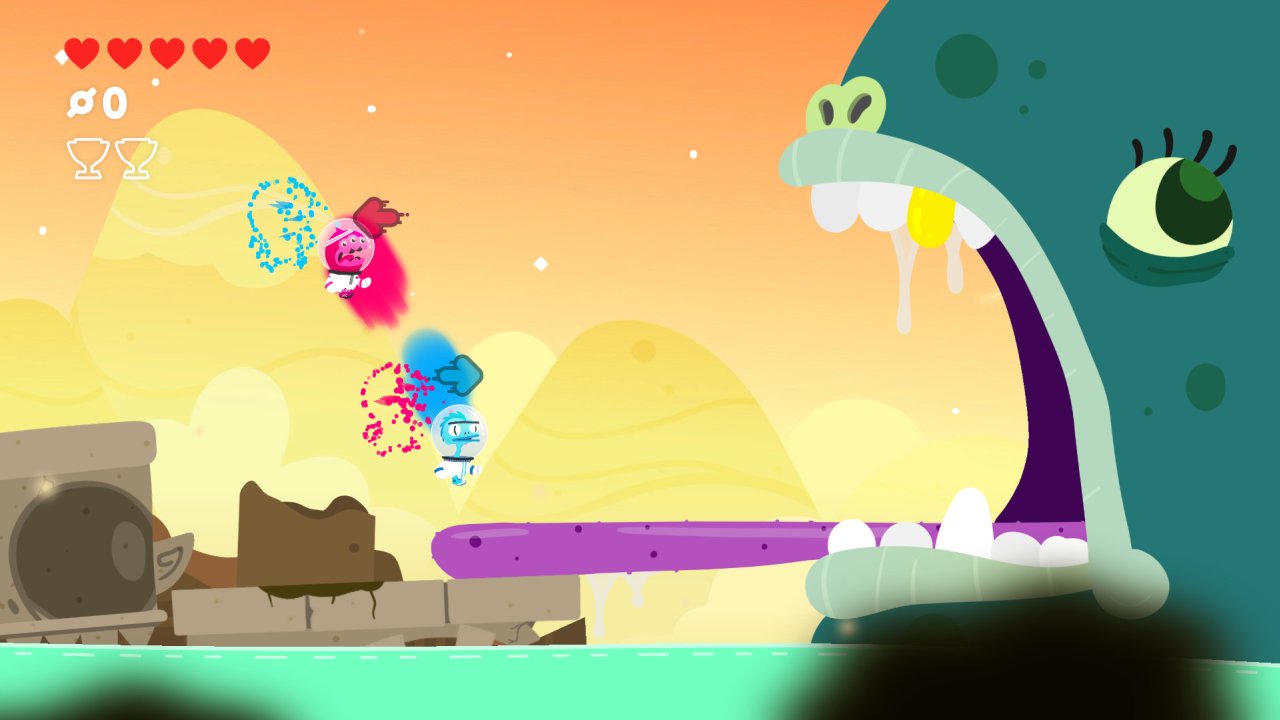 Joggernauts is both a whimsical joy and a maddening grind, but the gameplay is appealing enough that even when things skyrocket to an insane difficulty, you’re usually enticed to play on. It melds ingenuity with familiar platforming sensibilities that many should be able to appreciate, which is enhanced by its adorable, color-rich aesthetic. There are moments of repetition, and the game is pretty light on content, though it certainly doesn’t seem that way with how often you’ll be dying and restarting.

Our ratings for Joggernauts on PC out of 100 (Ratings FAQ)
Presentation
75
The cell-shaded graphics are quite basic, though the charmingly cartoony aesthetic and cheery soundtrack draw you in, adding a unique feeling of character.
Gameplay
70
Familiar platforming mechanics coupled with the creative concept of color-coordinating makes for an appealing, enjoyable experience. There’s a sprinkling of collectables, though this end could have been more fleshed out.
Single Player
63
Juggling 2 avatars alone can actually make things simpler, but also a bit bland. Also, considering the ingenuity of the game’s concept, it’s a shame that it wasn’t explored beyond the mere 20 plus stages, some of which are quite simplistic in level design.
Multiplayer
75
The essence of Joggernauts’ experience - hopping and jumping around with 3 other companions makes for a wacky and amusing romp, to the point where you won’t even care that the game gets absurdly and rapidly tricky.
Performance
85
No glaring issues - everything ran pretty smoothly and load times are swift.
Overall
72
Joggernauts is a charming party-platformer that will invoke feelings of both joyful laughter and rage. The game forces your brain to think in an obscure new way, as you scramble to juggle color coordination, pitfall hopping, and team communication.

Our Review of Joggernauts
72%
Good
The Verdict:
"Adding some color to the platforming genre"
Game Ranking
Joggernauts is ranked #916 out of 1659 total reviewed games. It is ranked #65 out of 148 games reviewed in 2018.
915. Sniper: Ghost Warrior Contracts
PC
916. Joggernauts

All videos for Joggernauts (1)
Advertisement ▼