As iconic as he is, it’s strange that Capcom has struggled to capitalize on the popularity of Mega Man. Outside of compilation releases, it has been over eight years since a new title was released for the series. And even the two most recent releases, Mega Man 9 and 10, were throwbacks that adhered to the mechanics of the older entries. With the series’ 30th anniversary upon us, though, the time for a new Blue Bomber adventure has finally come with the arrival of Mega Man 11. 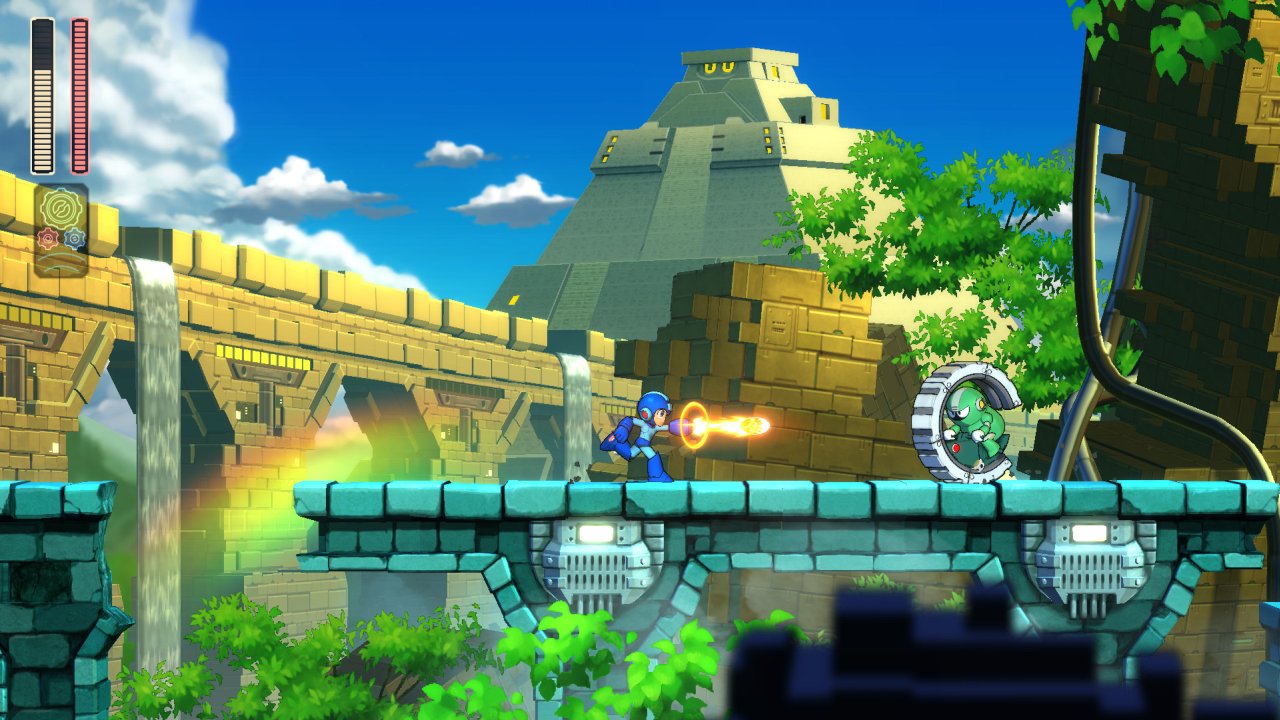 After adventuring into the post-apocalyptic future, the internet and most terrifyingly, three-dimensions, Mega Man 11 decides to play it safe. Utilizing the same 2D gameplay the series first drew from, the sequel represents a modern take on the formula. The vintage robot-blasting gameplay is in fine form and maintains the same brutally tough challenge you’ve come to expect from ole’ Rock Man. Carrying over from the last main-line series release, the title does give you four different difficulty options to choose from. Normal provides a stiff test, but for those who need a reprieve, or for the truly insane, casual and superhero levels, respectively, give you the chance.

At this point, you’re either in or out on what Mega Man is. The mainline series has only introduced a few new mechanics over the past 30 years, and 11 is no different. So, if you weren’t a fan of the often controller-smashing platforming the franchise has been known for, this one won’t change your mind. If you’re like me, though, and enjoy the formula, the latest sequel ranks in the upper echelons of the franchise. The controls are as tight as they should be, and as the culmination of the everything the series has adapted over the years, it feels both modern and vintage.

Mega Man 11 is not entirely old-school, though. As the title reveals, the nefarious Dr. Wily had an invention that was lost to time. Due to the emergence of Dr. Light’s work, Wily’s powerful Double Gear system has been stuck in the shadows for years. The evil scientist resurrects his powerful piece of work to once again try to take over the world. The system maximizes the potential of any robot it is installed into, either with enhanced speed or strength. Although the brainwashed Robot Masters are all outfitted with the tech, Mega Man has also been granted its use. 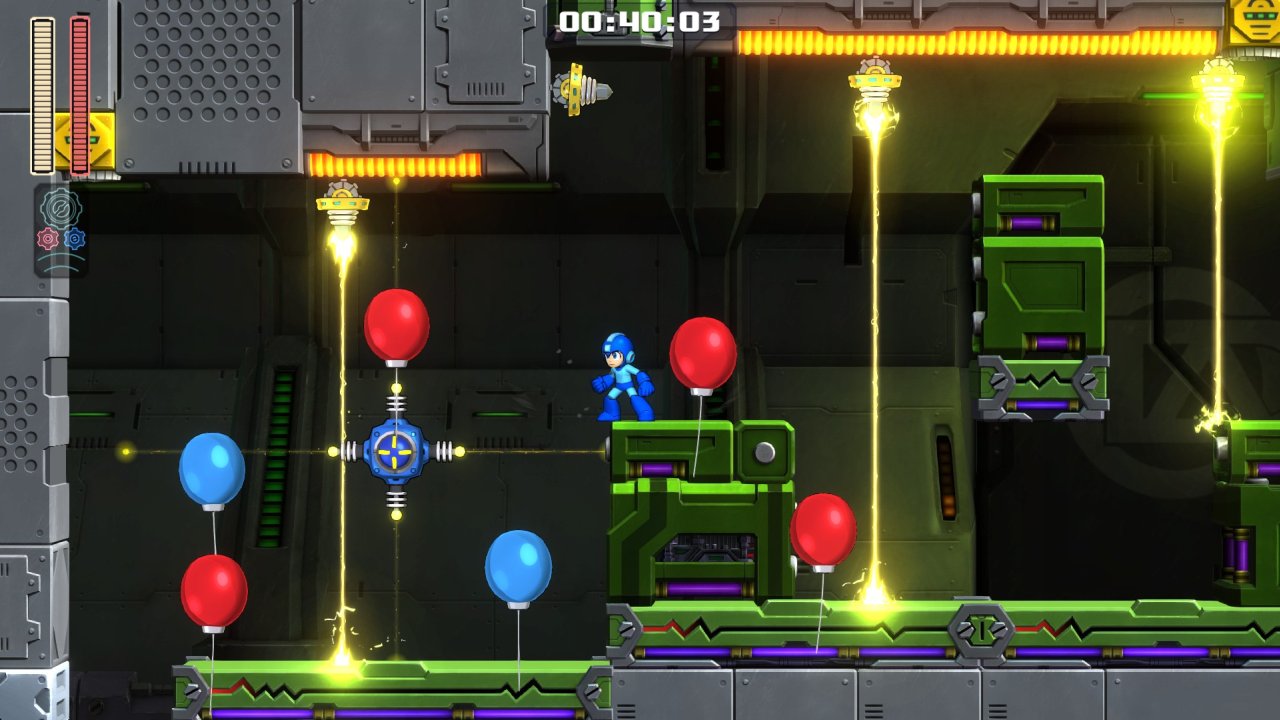 The Power Gear system allows Mega Man to tap into all of his weaponry, including that stolen from defeated foes, with an additional boost of fortitude. The Speed Gear lets him slow down time to dodge enemy fire and relentless level hazards. Additionally, if Mega gets hurt too badly, he can activate Double Gear in order to unleash a powerful blast. He can’t abuse either of the gears, though, as if he leaves them active for too long, he will overheat and be unable to use them at all for a period of time. The trick is to switch on and off from the two as the need arises.

While I appreciate the fact that Capcom is trying to add some innovation to an old formula, the Gear system feels a little half-baked. I felt that the Speed Gear was way more useful than the Power Gear, and my usage of each one reflected that. Being able to slow time in order to evade a screen-wide wave of fire or perfectly line up a shot feels immensely satisfying. Getting a more powerful shot, while definitely helpful, just doesn’t quite carry the same versatility. And considering how much the game relies on timing and precision, having access to stronger shots is just a waste when you miss.

As a latter period Mega Man game, the Robot Masters you face-off with aren’t exactly a memorable bunch. Forgettable enemies such as Blast Man and Impact Man stand between Mega and Wily. It’s not quite as bad as some of the later NES releases or the goof-balls that litter the X spin-off, but it’s among the weaker slate of foes the series has produced. The battles feel a little too beholden to the past, and there are only glimpses of variety seen across them. 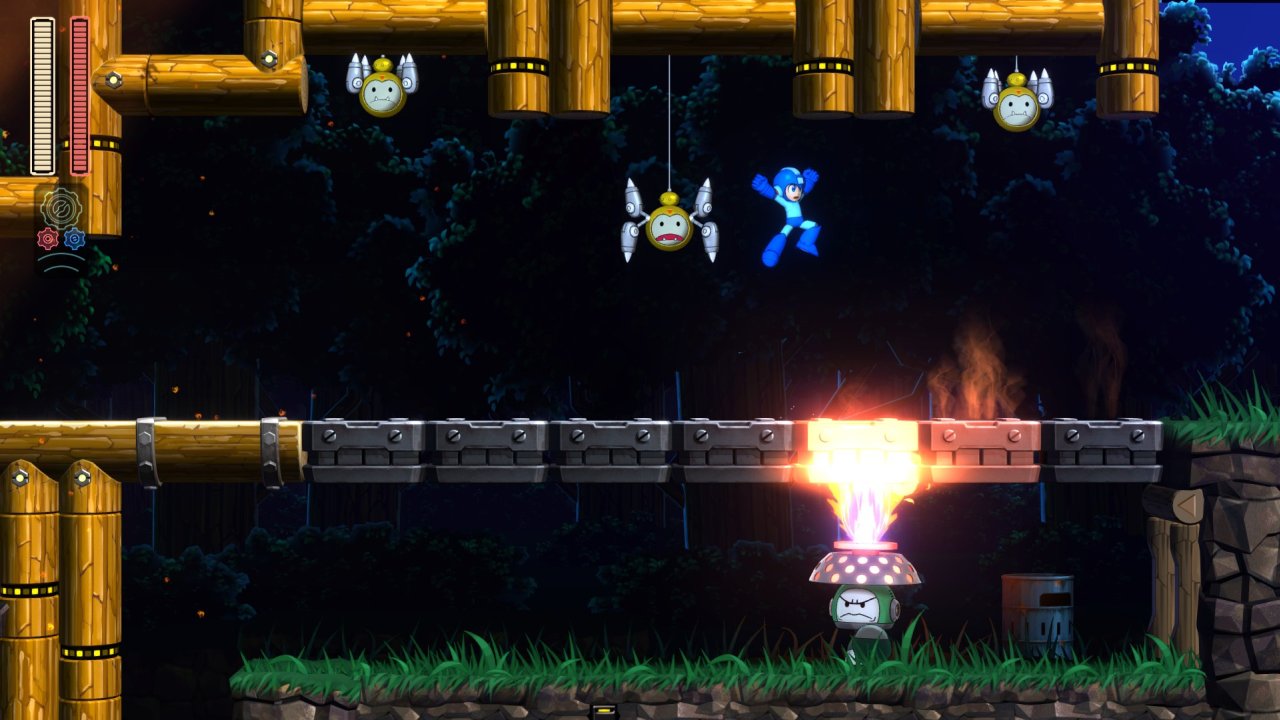 Even Dr. Wily’s latest castle stands among the weaker final levels. The level design fares a little better, but they feel like they were dragged out a little too long. There’s a constant feeling of “been there, done that” attached to the title. Even as someone who enjoys that classic gameplay, I kind of wanted a little more excitement out of the first entry in the series in eight years.

The level layouts of Mega Man 11 may have left me unimpressed, but I can’t say that they were unpleasant to look at. Moving away from the 2D sprites every past entry has used, the latest sequel utilizes a 2.5D style. The 2D stages each fit the personality of their respective Robot Masters, and pop on both the screen of the Switch and a regular HD TV. The 3D character designs look great too. They are bursting with color and personality. Mega Man has never looked better and the regular enemies that fill each level have lots of charm. Still, the Robot Masters are the weakest aspect of the visuals, with their designs struggling to leave an impression.

I’d be lying if I said that I didn’t enjoy my time with Mega Man 11. As a fan of the franchise, it felt like reuniting with a friend that had fallen off the grid over the years. It’s a perfectly fine entry in the series, but it does feel kind of stuck in the past. There’s nothing here that will attract new eyes to the franchise, and it feels like a missed opportunity on the part of Capcom. With such a long gap in entries, this would have been the perfect time to refresh the series in even more ways. Instead, outside of the Double Gear system, there’s not much that differentiates this one from the classics on the NES and SNES.

Our ratings for Mega Man 11 on Switch out of 100 (Ratings FAQ)
Presentation
75
With bright, colorful visuals and charming character designs, Mega Man 11 is the best the series has ever looked. It would have been nice if the Robot Masters had the same charm, though. For a franchise known for memorable music, the tunes here are a major disappointment.
Gameplay
70
How you feel about the throwback gameplay of Mega Man 11 is dependent on how you felt about the franchise as a whole. Outside of the half-baked Double Gear system, there’s nothing here you haven’t seen in the past. I don’t mind it, but the same may not hold true for everyone.
Single Player
60
There is a story here, and thankfully it ignores the ridiculously convoluted lore the series has rolled out in the past. However, the over-stuffed levels and disappointing Wily castle lead to a less than memorable journey.
Multiplayer
NR
None
Performance
80
Whether you are playing docked or un-docked, Mega Man 11 runs great on the Nintendo Switch. I do think that the JoyCons aren’t exactly suitable for the precision platforming the title requires. I would recommend using the Pro Controller.
Overall
74
Mega Man 11 doesn’t reinvent the wheel, but for this fan of the franchise, that’s not the worst thing. While it could have used more innovation and better boss battles, the core gameplay remains as enjoyable as ever. For long-suffering fans of the series, it’s nice just to have something new to jump into. 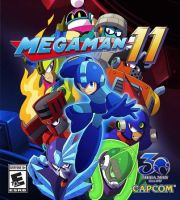