While popular in the world of film, the idea of a B-game is still kind of strange in the gaming industry. Campiness is a factor that’s hard to translate into something playable without coming off as just bad. If there’s a studio that has come close to nailing this idea, Rebellion Developments would have to be in the mix. From the comic book adaptation Rogue Trooper to the alternate history thrills of Zombie Army Trilogy, the developer seems to have a knack for the off-kilter. For their latest effort, Strange Brigade, they investigated cinema’s past for some B-movie inspiration. 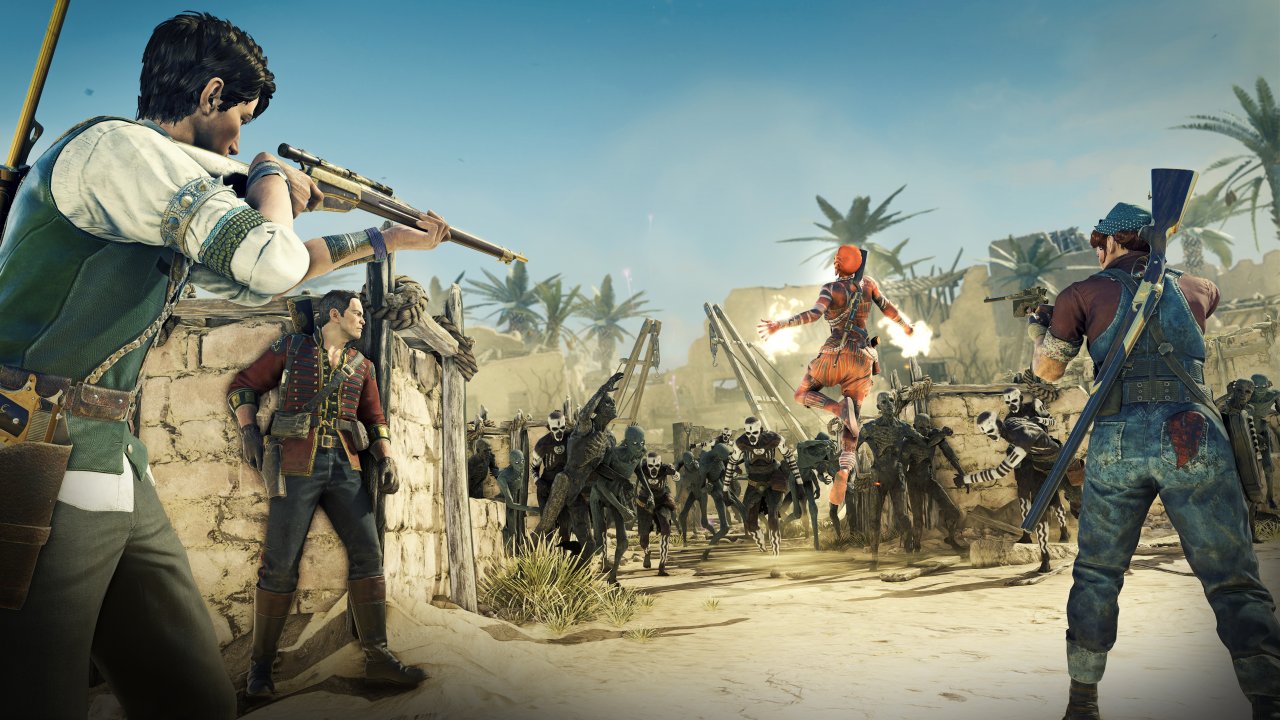 Taking a cue from the likes of Indiana Jones and The Secret of Treasure Island, Strange Brigade is an adventure that takes players across Egypt. The titular Strange Brigade, which is comprised of four different members, before DLC arrives that is, is a gang of treasure seekers who also dabble in saving the world. When an ancient Egyptian evil named Seteki is awakened, the team must act fast to stop her from pillaging the outside world.

The plot is almost as silly as it could possibly be. Seteki is a clear and dangerous threat, but the story is often more interested in telling wisecracks and groan-worthy puns than it is in building suspense. And honestly? I’m largely okay with this approach. Playing it too seriously would come off as an Uncharted-like rip-off, and the premise as a whole doesn’t really lend itself well to dramatics. Give me dumb jokes and obnoxious scares over fake drama any day. It would have been nice if the characters had any major personality traits, though. Each of the main four has a pretty unique look, but that individuality clearly didn’t extend to the writing.

Almost as ancient as the treasures you seek, the gameplay of Strange Brigade is decidedly old-fashioned. Whether solo or in a full squad, you’ll be traversing around surprisingly scenic Egypt killing mummies and looting chests. A traditional third-person shooter, you can carry two different weapons (one strong, one weak), as well as a grenade in your stating load-out. Additional weapons can be purchased using the gold you find, and special, limited use firearms can be purchased mid-mission as well. Another way for you to improve your weaponry is by equipping artifacts that can be found during missions. These gems, which hold powers such as health regeneration and incendiary ammo, can’t be de-equipped without being destroyed, so choose wisely.

While the characters may not have the strongest personalities, they do have their own unique skills. Each member of the Brigade is infused with ancient magic, which grants them access to a special power. Accessible through acquiring the souls of the enemies you slaughter; these powerful skills can turn the tide of battle. I was a fan of ex-soldier Frank Fairburne’s explosive shoulder ram, but each power is significantly helpful when the going gets tough. Additionally, new abilities can be purchased with skill points that can be acquired by finding all the artifacts in a specific level. A steep price for a small reward, but that’s the price of being an adventurer. 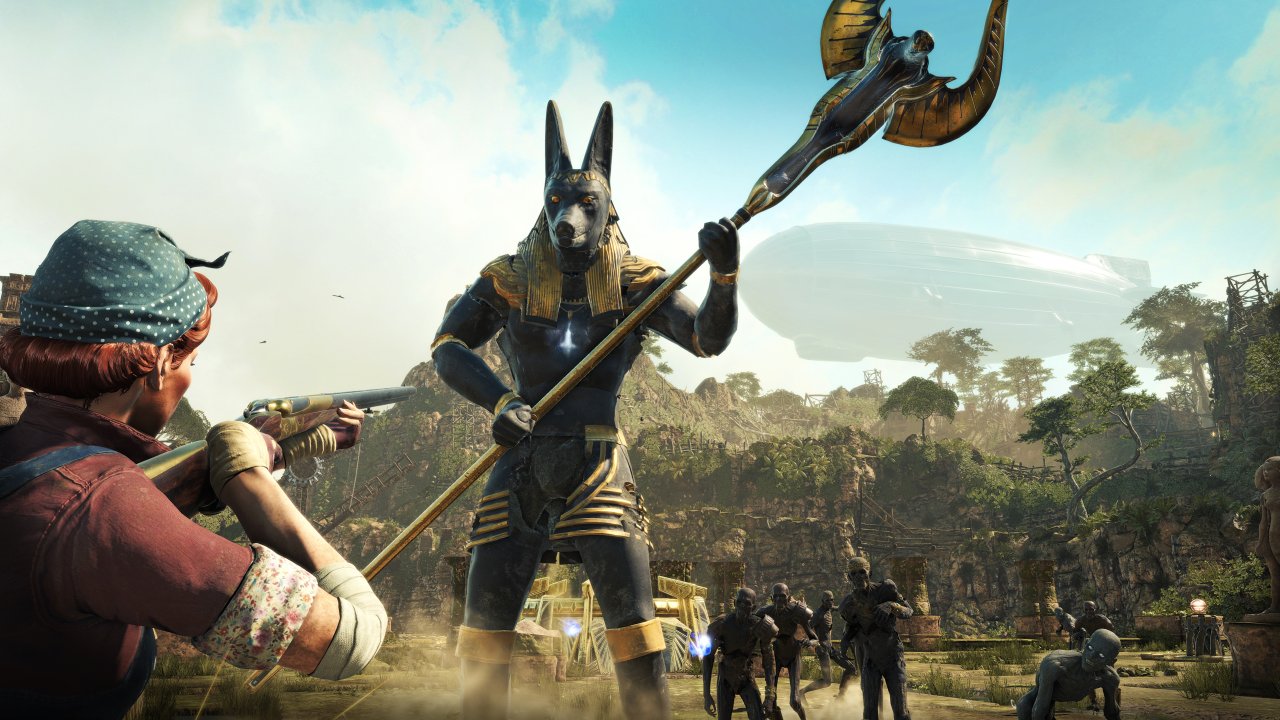 Given the developers' pedigree in shooters, I was surprised at just how clumsy the shooting often felt in Strange Brigade. Aiming feels wildly inconsistent, with some carefully aimed shots missing the mark, while others seemingly striking regardless of the where you’re aiming. The machine gun at least has the luxury of rapid fire, but the rifle, despite being listed as the most accurate, is frustratingly imprecise. Even attempting close-quarters combat feels off, as punches and kicks tend to miss despite the proximity necessary to use them.

Despite the misfire in the shooting department, it’s easy enough to deal with the hordes the Brigade is up against. Sticking to the gross and undead theme, the enemies of the title are a who’s who of creeps. Things start simple enough with walking cadavers and giant scorpions, but each level tends to add at least one new ghoul to the proceedings. Once one kind of enemy is introduced, though, it tends to re-debut in different forms repeatedly. Instead of a regular skeleton, you’ll start fighting pirate skeletons, for example. Boss battles tend to be a little more interesting, even if there usually isn’t a ton of variation in defeating them. Either they’re like Dread Pirate Tiberian and you can shoot at them freely, or they’re like the Titan of the Pyramids, and you gotta blast switches in order to do damage. The battles themselves are enjoyable enough, but it’s hard not to see the repetition in these sections.

Thankfully, there are a handful of ways to bypass having the need for any sort of accuracy. Each level is littered with booby-traps of all shapes and sizes that are perfect for dissecting ancient evils. Whether it’s the traditional spikes shooting up from the ground or the less usual spinning blades of death, there are no shortage of deadly contraptions for you to experiment with. And you’ll need them, because even on the lowest of difficulties, you’re going to be overwhelmed by enemies. Once bosses start entering the picture, the battles get even more insane.

There’s more to Strange Brigade than just the massacre of the undead and evil, though. As mentioned, the team is also heavily interested in gold and treasure of any variety. Each level of the game is filled with both, provided you seek out every nook and cranny. As mentioned, collecting complete artifact sets rewards you with skill points, but most of it just goes directly to your bank account. To unlock the biggest treasures, though, you’ll typically have to solve a puzzle of some kind. Considering the optional nature of most of them, the fact that most of these riddles are extremely easy to solve was disappointing. Puzzles such as connecting pipes and shooting matching symbols are not only easy, but bland once you do the tenth iteration of one. 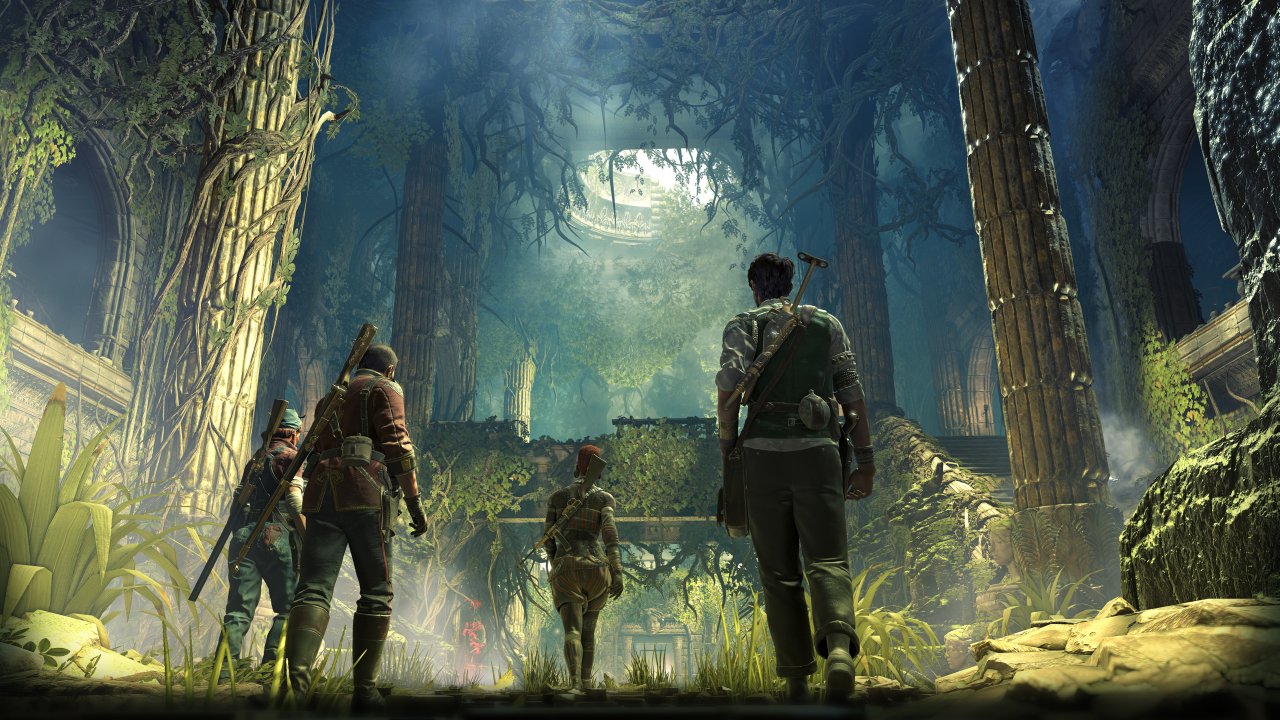 Outside of the main campaign, there’s a Horde mode that you can partake in. As far as Horde modes go, it’s unexceptional, but if you’re into that sort of thing, you’ll probably enjoy it. Score Attack mode also unlocks for each level after you finish them in the main game. Again, it’s decent enough, but it does highlight some of the larger problems with the title. The awkwardness of the shooting mechanics is reinforced, as well as just how dragged out some of these levels can feel.

If Strange Brigade was a single-player only experience, we’d be talking about a debacle on a grand scale. Playing by myself was a complete chore and going solo takes away almost all of the enjoyment the campaign produces. However, even with one other player, the experience was greatly improved. Outside of some server issues I ran into pre-release, my experience going online with the shooter has been mostly solid. Considering the busy release schedule and lack of promotion, I do have concerns about the title being able to find a strong audience going forward, though.

Strange Brigade looks about as good as you would expect from a B-level experience, which is to say inconsistent. I already mentioned my appreciation for the designs of the Brigade members themselves, but I was also generally a fan of the art design for the levels, as well. There’s a good amount of variety in where you explore, with scenic jungles, crumbled buildings and musty tombs being some of the highlights. Technically, they’re not the best you’re going to see on current-gen consoles, but there’s at least some personality here. The sound design doesn’t reach that level, though, as a forgettable soundtrack and often-obnoxious voice acting put the idea of muting the TV a decent idea at times. 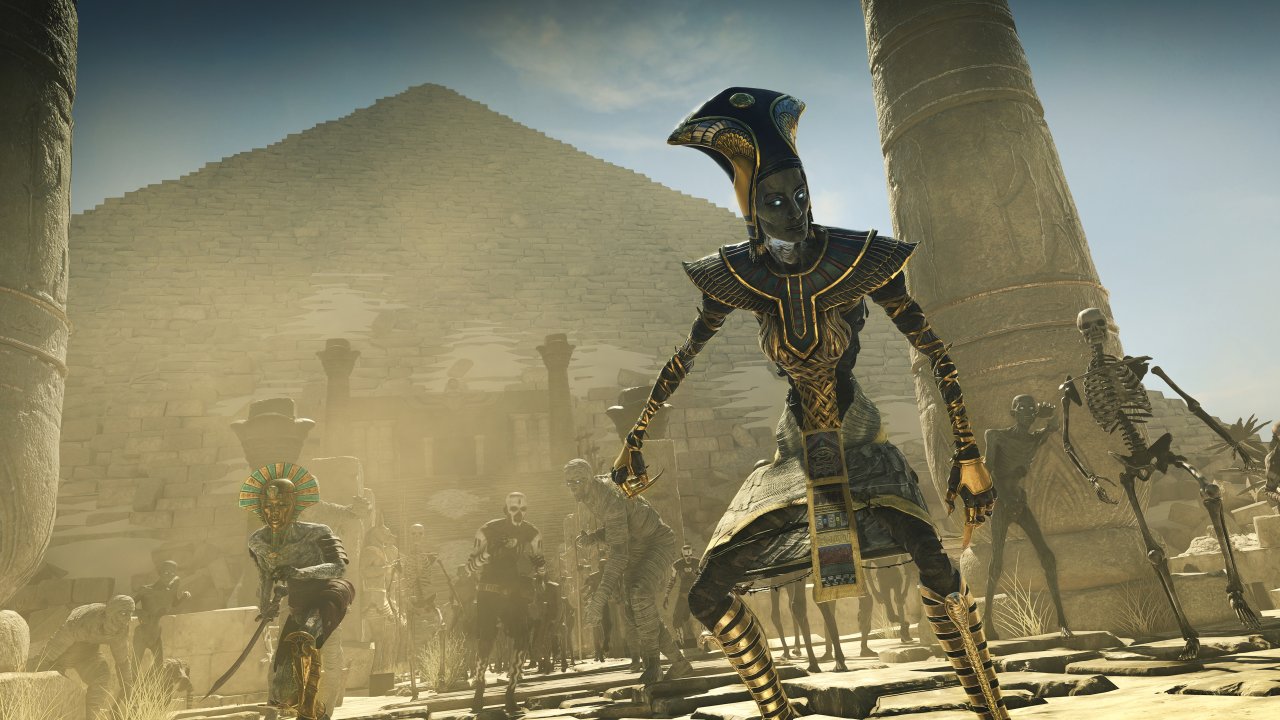 Clearly designed with it in mind, Strange Brigade is saved by the fact that its multiplayer antics are genuinely enjoyable. If you and your online friends are waiting for the next big multiplayer release, or are suffering from some Fortnite-fatigue, the co-op adventure is a decent enough way to pass the time. Make sure you have someone to join your Brigade, though, as otherwise, going solo will only lead to you laser-focusing on the game’s deficiencies. The inconsistent aiming, lackadaisical puzzle design and lack of characterization can’t be ignored. Having an ally standing next to you, though, makes these issues tolerable at least.

Our ratings for Strange Brigade on Xbox One out of 100 (Ratings FAQ)
Presentation
60
From a stylistic standpoint, Strange Brigade is full of charm. The levels are varied and consistently eye-catching, and the main character designs are solid. However, they lack polish at times, and the enemy designs can’t match up. The less said about the audio, the better.
Gameplay
58
Strange Brigade is not inherently broken, but it is often uninspired. The third-person shooting is nothing to write home about, and the inconsistent aiming will be sure to frustrate. The puzzle designs add a little variety to each mission, but they’re not particularly taxing.
Single Player
55
The B-movie approach to the story was really the only way this title was going to be bearable. The actual point of all this spelunking may be unmemorable, but the riffs, puns and cheesy scares make things better. It would have been nice if the Brigade’s personalities matched their designs, though.
Multiplayer
76
Strange Brigade is only worth recommending because it’s multiplayer is as enjoyable as it is. Fighting with friends over gold, and having to come together to survive wave after wave of enemies is a fun enough way to spend a long weekend. The modes outside of the main campaign aren’t particularly worth sticking around for, though.
Performance
80
No noticeable issues that I can think of while playing on the Xbox One. Online servers are currently holding up, as well.
Overall
66
As long as you have good company, Strange Brigade is an expedition worth undertaking. However, that doesn’t excuse the many issues the title has. The game would have benefited from refinements both to the aiming system, as well as puzzle design. Still, this cadaver-blasting, treasure looting adventure is an enjoyable enough reason to gather a few friends together for, as long as you know what you’re getting into.

All videos for Strange Brigade (5)
Advertisement ▼