With every year that passes, I wonder if this will be the one in which platforming dies. Bleak an opening as that may be, we're at a point in which the genre has become almost inseparable from gooey, 8-bit reworks, to such an extent that the nostalgia upon which these games rest so heavily seems more and more to give way to merely 'jumping on the bandwagon'. If some players were experiencing oversaturation back in 2015 with Shovel Knight, then the present state of platforming is something like World War Z. And as the hungry zombie-mountain of 8-bit love-letters threaten ever more to consume the genre entirely, it really does beg the question whether or not we're past the age of 8-bit sincerity. 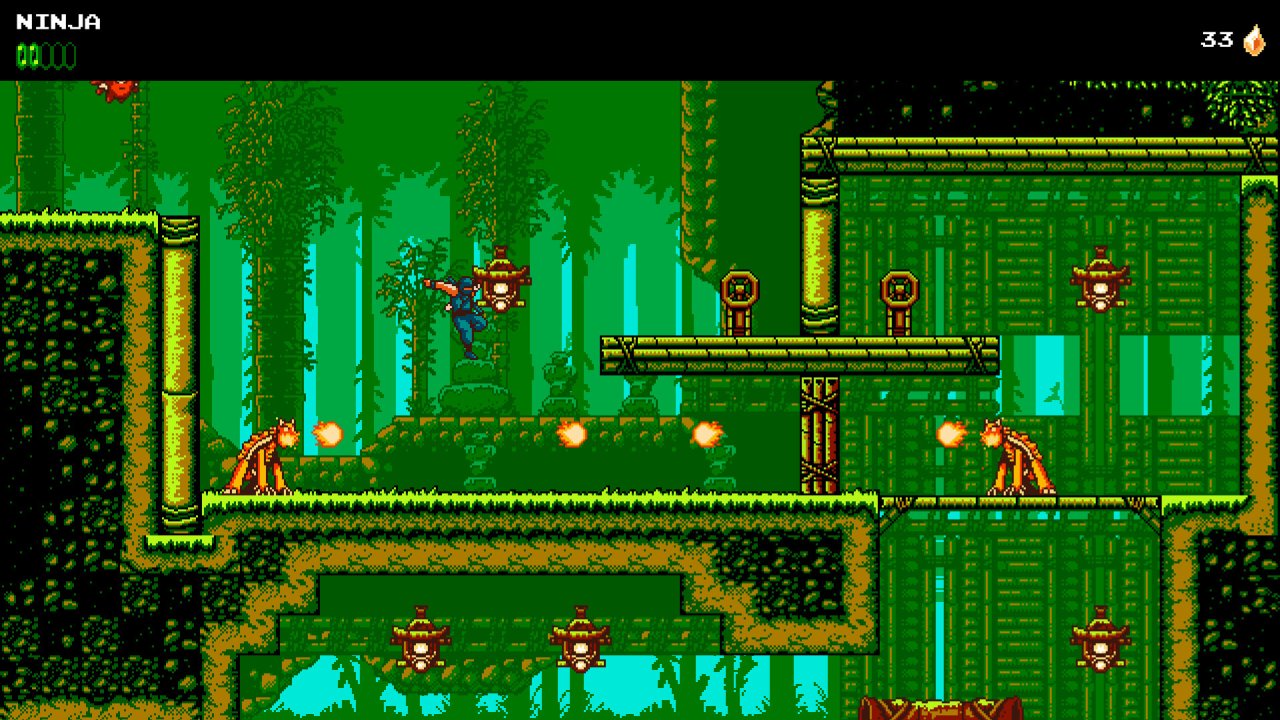 It must be said, The Messenger – debut of Sabotage Studio – isn't the sweeping “no!” we might've been hoping for, but it is a firm affirmation that style, grace and narrative wit can still all be cogently combined to create something inventive, fun and crucially wholehearted.

The story is delightfully zany; a wry tribute to the odd, overblown charm that helped define the 8-bit era. You play as a young ninja, disenchanted with hours of rigorous training and longing to explore realms outside your clan's humble village. Conveniently, your wish is granted when the village is attacked by a fierce demon army hell-bent on eradicating the human race, overrunning the place with hundreds of vile monsters. As the world darkens, you're landed with a powerful scroll that proves to be your clan's last hope of survival, so it falls to you to traverse this newly cursed realm to deliver it and save your people.

As you might expect of a retro platformer with Ninjas within the opening five minutes, the prime influence behind The Messenger's design is Ninja Gaiden, but the odd humour and technical rigor with which developer Sabotage homages the platforming classic instantly strikes a chord with Yacht Club Games' Shovel Knight. The platformer's cheery optimism glimmers fondly through The Messenger - from its bolshy colour design to the satisfying 'pling' as you name your save slot in the opening menu. Though not quite as floridly (Sabotage lean more into the aged golds and quiet misty backdrops of ancient Japan than Zeldaesque sunshine), The Messenger exhibits a love for the 8-bit era with an honesty still rare despite the subgenre's expanding catalogue, embedding the memorable quirks and touches of the beloved NES within a modern technical edge.

It's instantly clear to see Sabotage's preference for the more dynamic, twisted portions of the original Gaiden trilogy, however, for its hatchety haunted swamplands and gemstone encrusted mines feel decidedly separate from the dingy streets and cityscapes that frequented Tecmo's first three games, even teasing DOOM with its lovingly grotesque monster design. 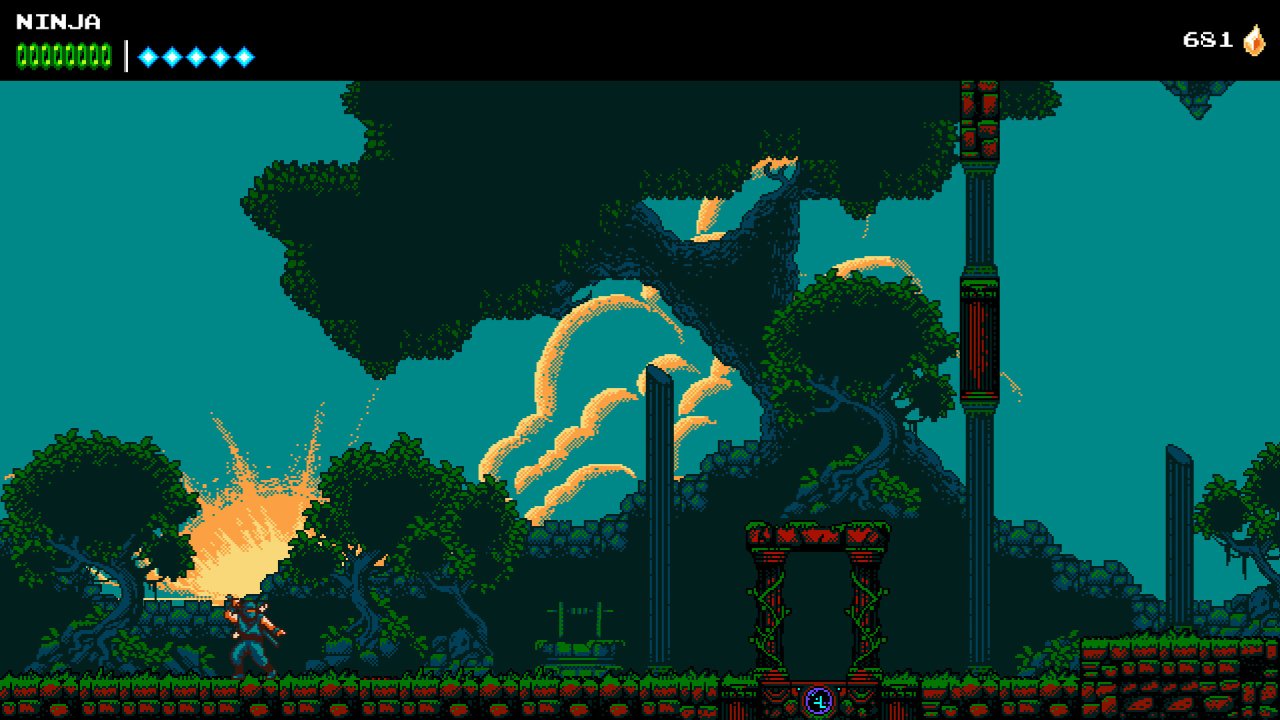 The Messenger thereby lurches you into the kind of blissful dream Shovel Knight did; a hotchpotch of gaming memories fashioned into a dimension exuding very much its own personality. As a result, you needn't have picked up a S/NES controller to enjoy The Messenger. But if you have, just prepare for a little heart-quivering.

This said, The Messenger makes a quick return to the Gaiden setup once gameplay begins. The original SNES trilogy echoes delightfully through the protagonist's spin-jump animations and nippy katana-wielding, though with all the modern technical fine tuning to make level traversal as gleefully elegant as the game's ninja-y premise demands.

Your standard sword attack is crucial to both combat and movement in The Messenger. Attacking things while jumping will allow you to 'Cloud Step' and remain airborne for a temporary period, which informs much of the skill-oriented platforming sequences as your adventure progresses. You also have supplementary abilities, which function similarly to Gaiden's Ninjutsu in providing powerful ranged attacks that cost energy to use.

If you've played Spectre of Torment - Yacht Club's most recent entry to the Shovel Knight saga - you'll already be familiar with this style of play, though thanks to the straightforward control scheme and environments that consistently allow you to test out your skills, it'll quickly become second nature regardless of your experience level.

Dropping Shovel Knight's world map, The Messenger plays chronologically across a series of themed areas, giving the adventure a linearity comparable to an arcade title. Though timely platforming remains central across the game, each area is fleshed out with enough diverse pitfalls and contraptions to keep your ninja reflexes from dwindling. In terms of design, things are pretty much standard fare (from falling platforms and crunching columns to the ol' reliable one-hit-killing spike pit). They're also meticulously-structured, alternating organically between speedy outrun sections, observational platforming and contained mini-boss faceoffs with ninja-like elegance. 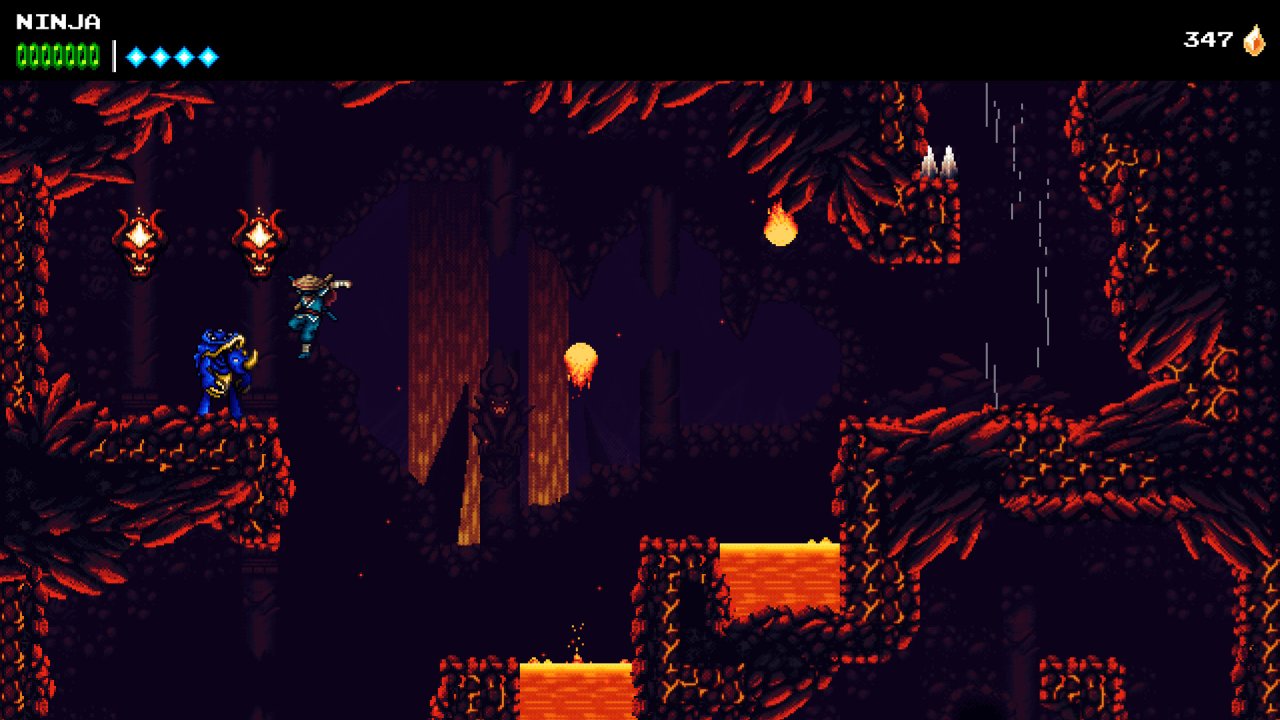 Oftentimes, elegance appears to be one of the prime functions of The Messenger. Coupled with intelligent enemy placement and a tight-as-tight control scheme, sections are just challenging enough to allow the player to really revel in pulling off complicated manoeuvres with relative ease; though it might take a couple of tries to vault over that moving pincer, hotstep between fireballs before crouch-landing to obliterate that oncoming floorcreeper, it's all too satisfying to pull it off against Rainbowdragoneyes' boppy collection of NES-inspired chiptunes.

There are also several collectibles scattered across each area, which can be traded for additional weapons and health and ability upgrades. Though not as diverse as the music scrolls, enchanted coins and other add-ons that lay hidden in Shovel Knight, the Time Shards and Power Seals concealed throughout The Messenger's ample supply of hidden levels ultimately have the similar purpose of unlocking purchasable weapons and attacks to lend an extra hand in combat. They're appreciably weaved into the oddball story, too. I found it difficult to resist the mysteriously locked trunk that appeared in the merchant's shop after I found my first Power Seal, which made re-exploring areas worth it just to satisfy my curiosity.

Once satisfied, however, I rarely felt the need to dive into my supplementary weapons and attacks across my time with The Messenger. The focus seems so centred on providing a fun, accessible platformer that combat is often scaled down to ensure as many folks as possible get to experience the whacky storyline. For that reason, boss battles tend to exist as comedic rewards for completing the far more challenging main areas, which - though humorous and tremendously written - may disappoint some platforming vets expecting a more fearsome test of mettle.

I say some because the script is so consistently well-written that any lapses in challenge level are (more often than not) likely to be made up for by the bizarre comedy routines encounters often descend into. Main adversaries are a case in point, and manage to consistently surprise between the more conventional swamp monsters and ogres forming the simpler minibosses. Alas, I could go on all day about the Necromancer's moral tension with his bewitched sceptre or other spoilerific particulars, but for the sake of leaving the game's many surprises intact, it's really best you uncover them for yourself. Because they're all really quite sweet.

The most satisfying aspect of The Messenger is by far the platforming, and it's true that sleek level traversal remains (as it should) at the core of its gameplay. Yet, there are subtleties to The Messenger that truly differentiate the game from the bulk of half-baked retro platformers for which the subgenre is gaining notoriety. 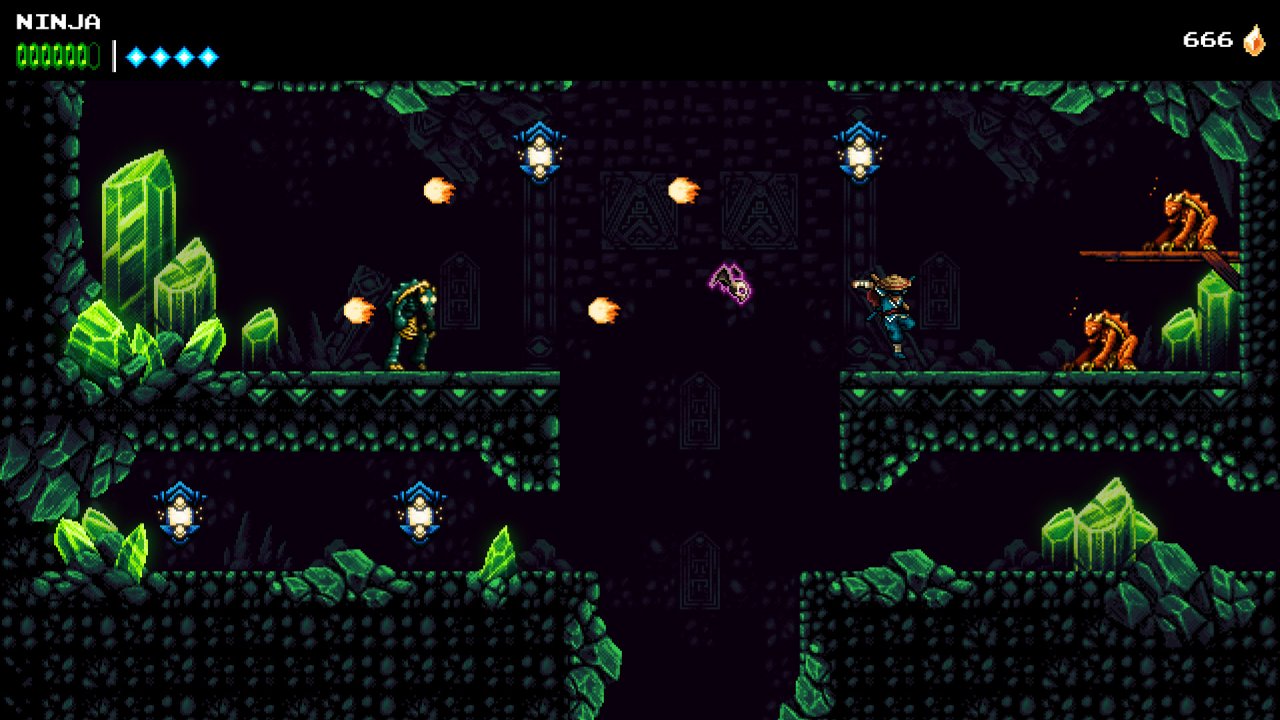 As you venture ever further from the land of the living into the accursed hellscape (though if hell looks and feels this good I'll at least book a holiday), The Messenger takes a real joy in toying with conventions and ripping on tired formulae. At several points the shopkeeper encouraging me through my perilous quest apologised for how 'cliche' I must be finding fighting demon skull-bats, and continually promising that things would get more original soon. Frustratingly, these developments must merely be glossed over here in the interest of keeping the game's many surprises intact, but it's safe to say that what begins as a fun retrospective love-letter becomes quite a unique send up of the 8-bit era. Sometimes, it's the 16-bit era, and that's as much of a clue I can offer.

Though Shovel Knight devotees and Gaiden fans will quite possibly throw their hands up in relief in response to The Messenger's sprightly visuals and winning chiptune soundtrack, Sabotage make abundantly clear that they aren't interested in simply cashing-in on either game's success. The story of The Messenger is both peculiar and unavoidably modern; laced with an amusing self-awareness of its own existence within an increasingly saturated subgenre. In so doing, Sabotage not only invites players to don the rose-tinted spectacles and relive their fondest memories of the classics, but knowingly skews the formulas they helped create, balancing nostalgia with invention in a way that hasn't felt this refreshing in years.

Our ratings for The Messenger on PC out of 100 (Ratings FAQ)
Presentation
82
Sporting the loud colour design and toonish character designs of a late NES title, The Messenger's lovely 8-bit realm strikes a still rather rare balance between the nostalgic and the inventive.
Gameplay
77
Though boss encounters tend to lack the tension and challenge of previous games in the nostalgic platformer subgenre, the increasingly complex platforming stages more than make up for it, while a tight-as-tight control scheme ensures movement carries all the elegance befitting a true 8-bit ninja.
Single Player
83
With the kind of goofball charm observed in Shovel Knight, The Messenger's kooky cast and quaint narrative lovingly homages the Ninja Gaiden series, before eventually lurching into a fun, smartly-written play on 8-bit conventions.
Multiplayer
NR
None
Performance
(Show PC Specs)
CPU: Intel Core i7-4710HQ @ 2.5ghz
GPU: Nvidia GeForce GTX 860M
RAM: 8GB
OS: Windows 10 64 bit

70
Some minor framerate hiccups, especially during more saturated or speed-oriented sections, but nothing particularly obstructive, and nothing permanent.
Overall
79
Less a Gaiden successor and more a general love-letter to its look and style, The Messenger allows fans to hop gleefully between cheery gaming memories without being bound by the rigid controls and punishing precision of a prior era, while somehow managing to remain entirely accessible to newcomers as a fun, unmistakeably wholehearted 2D platformer. 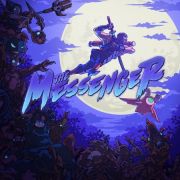 Our Review of The Messenger
79%
Good
The Verdict:
"An ardent Ninja Gaiden love-letter that confirms there's still joy to be had in the 8-bit platformer"
Game Ranking
The Messenger is ranked #538 out of 1659 total reviewed games. It is ranked #29 out of 148 games reviewed in 2018.
537. Persona 5: Dancing in Starlight
PlayStation 4
538. The Messenger