As if the status of VR wasn’t currently crumbling into technologically-hindered dust, Daedalic Entertainment uses the concept of the virtual world to ask one of the most intriguing questions skirting the technology’s nebulous future: What if technology enabled us to create complete virtual worlds that felt realer than reality? What if you could upload consciousness? 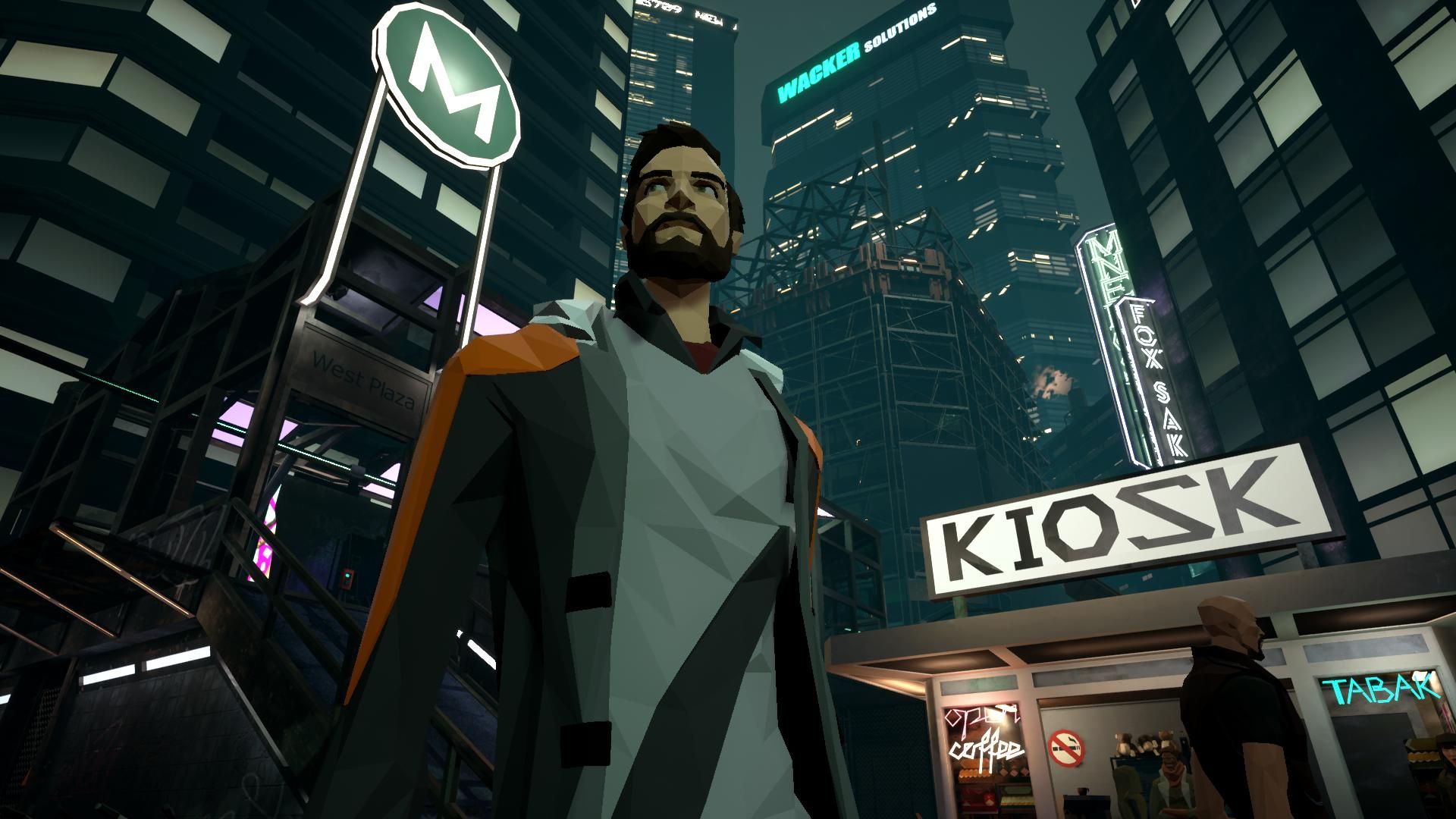 Though these questions are in no way new (the connection between individuality and cyber technology has remained a science-fiction trend since the contributions of Philip K. Dick in the 1960’s), State of Mind knowingly and effectively projects its existential messages onto very contemporary concerns with Cloud data, shared access, and cybercrime, which in turn affords its fairly average science-fiction narrative a grounded punch.

This is a relief, given that narrative is absolutely central to State of Mind’s experience. The story follows main protagonist Richard Nolan; a hot tempered, but esteemed columnist for a highly-regarded news outlet. We join Richard in the back of an ambulance, where it quickly transpires he’s experienced a serious car accident that has left his memory in pieces and his wife and son curiously absent. Interspersed between Richard’s attempts to remember are those of the placid Adam, who has also had a serious crash, yet whose contrastingly idyllic family life remains intact.

But as both science-fiction and the expectation for good storytelling imply, similarities between Richard and Adam run deeper than their shared trauma, which are gradually (and, against the potent concern with online identity and data theft, rather predictably) uncovered as Richard works to recover. Without giving anything away, the two realise the extent of their similarity within the first hour, which inevitably throws them up against wide government conspiracies and deep existential questions as they cooperate to make sense of the accident. 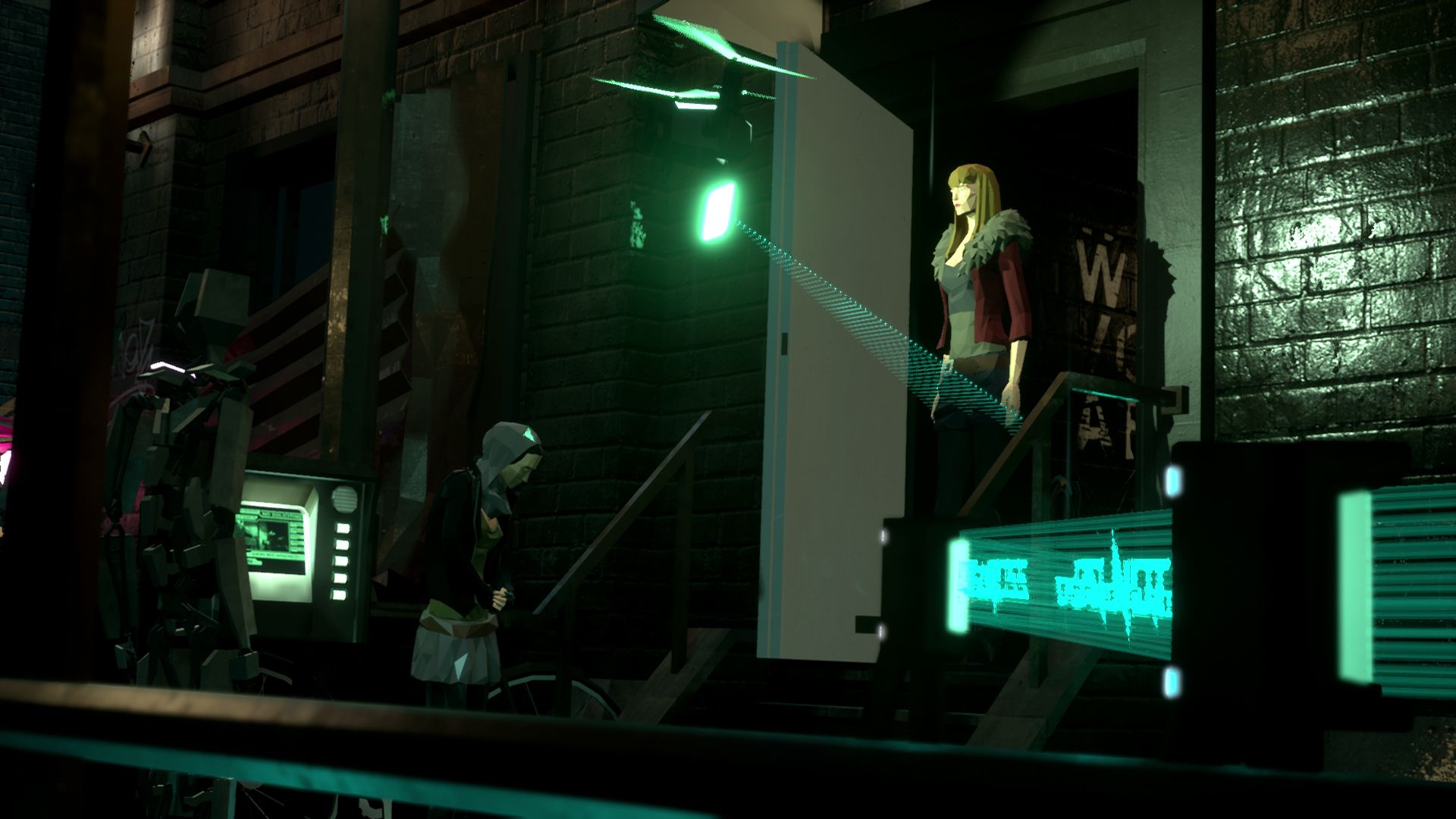 As has been discussed by Daedalic before now, the central concept driving State of Mind is transhumanism: the (very pertinent) fascination with pushing humanity beyond its mental and bodily limits via technology. Indeed, the game’s programmed realities neatly address our own hyperconnected world, using the doubling between Richard and Adam to question how much control we have over our online selves.

These questions form the base for State of Mind’s tech-obsessed dystopia, while also referencing Blade Runner with its picture of humanity suffocated by its own limitless appetite. Richard’s home is a bleak underworld filled with sketchy cybercriminals and neon-lit nightclubs, dominated by advertisement drones while its continually talk about abandoning Earth for Mars. This submerged, highly corporate cityscape is set against the utopic virtual world containing Adam’s idyllic family life, recalling BioShock Infinite with its suspicious all-is-well atmosphere. Even the stylized, polygonal look offers a transhumanist vision of humanity fused with the seductive angularity of the machine.

The resulting unease is both reminiscent of, and more relevant than the arguments of Blade Runner and perhaps closest to SOMA, reflecting an increasing concern for where our identity is stored, and how our continued love affair with online data might affect our concept of what makes us us. 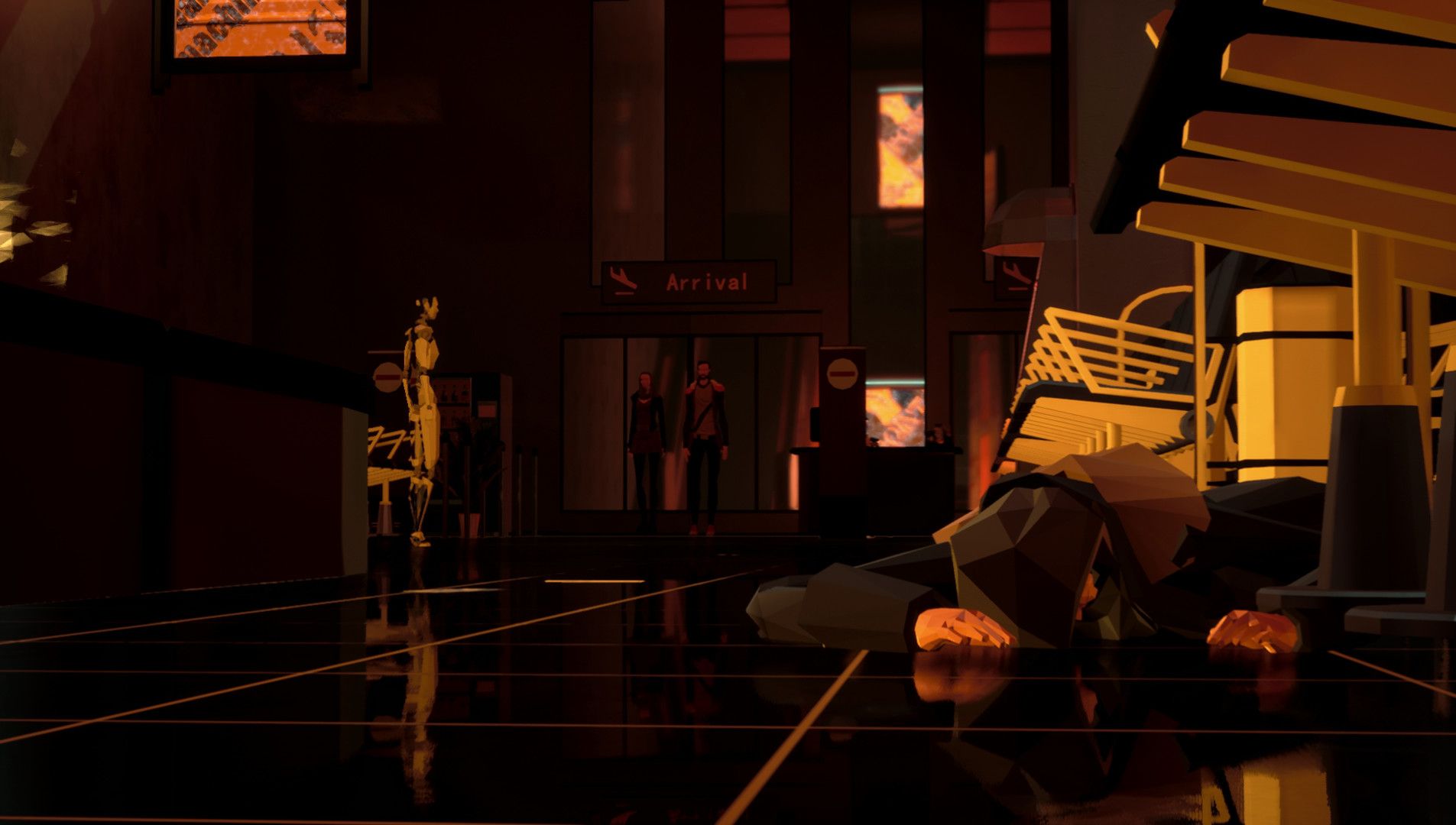 Following in the footsteps of Life is Strange and other recent story-driven adventures, State of Mind capitalises on a simple exploratory format to keep its existential themes steadily driving the experience. Main gameplay alternates between inconsequential dialogue options and simplistic fetch quests, in which the player explores stylish, but noticeably reigned-in environments in search of some gadget or identity document. Occasionally, you’ll need to organise the evidence you gather to uncover clues to point you in the right direction, but they’re essentially interactive bridges between cutscenes that require little if any thought.

There’s also a very slight issue with movement; characters occasionally lack the dexterity to turn quickly and tend to get caught in doorways, but they’re minor hindrances given that so many scenes atmospherically lend themselves to gradual exploration.

Elsewhere, Daedalic makes excellent use of the science-fiction genre to diversify the repetitive gameplay structure with regular tech-oriented minigames. Through Nolan’s increasing familiarity with criminal underworlds and fragmented identity, you’ll hack corporate drones to scan for your next lead, or access the memories of others by completing dreamlike reality jigsaws. Amongst the most enjoyable segments are those optional to the main story, which invite the player to toy with various gadgets and appliances. My favourite sequence was when I got to control a robotic jellyfish named Henry, in which I swam through a pristine virtual park with no other objective than to revel in my own adorable floppiness.

Yet, the most glaring problem with State of Mind is the frequent inability of its protagonist to create a meaningful connection with the player. Though solidly voiced, Richard Nolan’s unyielding grumpiness doesn’t always suit the situation, which can make him difficult to like as the disgruntled everyman the game seems to want to paint him as. 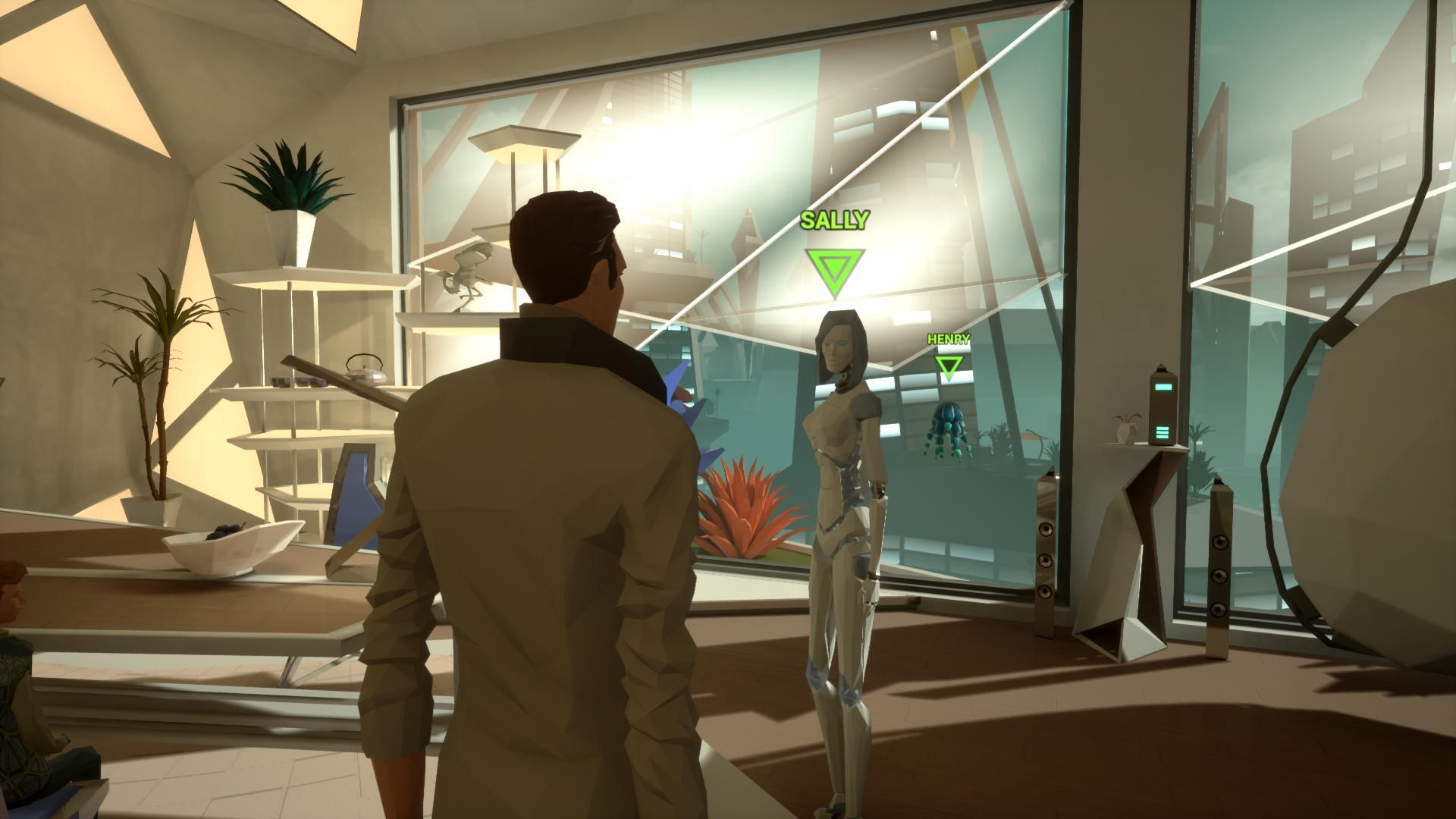 State of Mind’s issues are, to some extent, curbed by the attractive visual style and gracious familiarity with science-fiction tropes, which - though never quite striking the emotional resonance of SOMA, or the consequentiality of Life is Strange – converge into a perfectly serviceable science fiction adventure. But at many points, it seems so eager to raise its own arguments surrounding human independence and technology, that it ironically denies the player space to truly connect with its generous cast of playable characters. I get the impression that might ever so slightly be Daedalic’s point, but such an argument is ultimately better suited to film than the interactive medium.

Our ratings for State of Mind on PlayStation 4 out of 100 (Ratings FAQ)
Presentation
80
The polygonal art style fits neatly with the game’s transhumanist themes, offering an attractively stylized version of Blade Runner’s dystopian cityscape.
Gameplay
63
The fascination with alternate worlds admirably helps keep the constricted environments becoming tiresome, puzzles are too simplistic to register as anything more than interactive bridges between cutscenes.
Single Player
69
Tonally and thematically resembling SOMA, State of Mind uses the concept of transhumanism as a base to explore issues of human identity and their connection with technology, which though unquestionably fascinating could’ve benefitted from a more varied script.
Multiplayer
NR
N/A
Performance
80
State of Mind runs smoothly from start to finish, but if you’re playing on a regular PS4, expect to hear it whirring during the game’s quieter moments.
Overall
73
Fans of the story-driven adventure game will likely find parallels with previous successes like Life is Strange and SOMA, though State of Mind’s reductive puzzles and constant tone fail to match the level of personality in either. This said, the developers are committed to exploring transhumanism in relation to very pertinent contemporary concerns, and ensure there’s enough sci-fi fluff to distract from the simplistic gameplay structure. 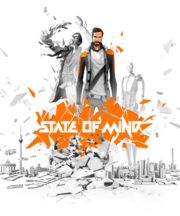 All videos for State of Mind (1)
Advertisement ▼