I remember, years ago, reading a review for Tron 2.0 that claimed platforming in first-person games should stop existing. The idea behind it was that the limited field of view in this perspective made judging distance nearly impossible and the stiff controls of Tron 2.0 weren’t up to the task of pinpoint precision. While I didn’t personally share that opinion, it wasn’t long before I started to notice how sloppy first-person platforming really was. 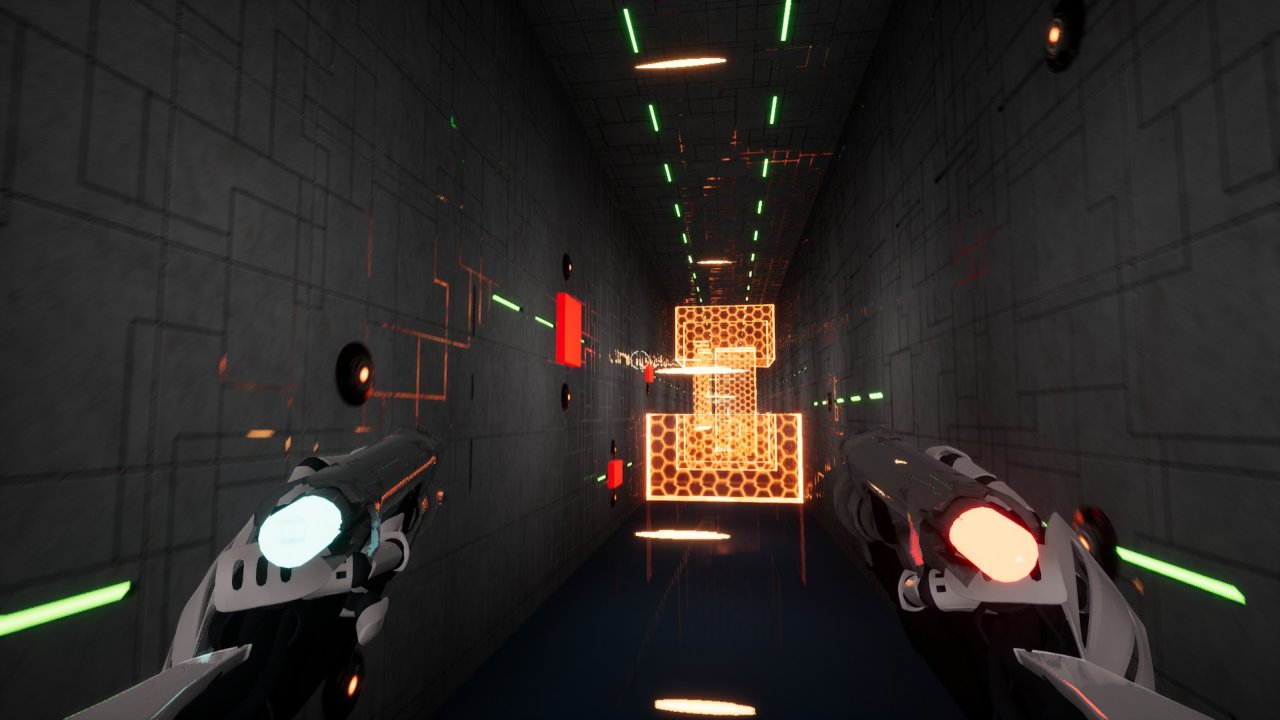 When Portal released in 2007, though, Valve showed the world that there was more that could be done with a first-person perspective instead of just shooting guns. Portal brought about not only a Zelda-like puzzle atmosphere, but the occasional platforming segment that put each player’s skill to task. If you weren’t aware of your surroundings and how your character controlled, you were gonna perish. Since then, we’ve seen plenty of developers try their hands at integrating platforming elements into first-person games.

What does any of this have to do with Impulsion? Well, the main concept for this game is basically Portal meets Mirror’s Edge with a dash of ‘90s flair. Assuming the role of a robot, your task is to complete a series of increasingly difficult test rooms to prove your worth in escaping some spaceship. These rooms don’t feature combat of any kind, but focus purely on platforming with some speed altering gimmicks.

As you progress through the campaign mode, the game teaches you different mechanics that eventually coalesce into complex levels that demand precision and spatial awareness to succeed. Starting off, though, you’ll be given a short tutorial on how to move and then be gifted a blue gun that shoots out a bubble which speeds you up as you run through it. With this, you can gain extra height from your jumps and will be able to reach higher platforms and perform a couple of other neat maneuvers.

After a quick level testing out that mechanic, the game then gifts you a red gun which allows you to slow down your speed and even jump a second time in mid-air. This gun can only shoot on specific surfaces (typically denoted with a red square), but it will basically freeze you in place and allow you to survey the environment on where to proceed next. With these two guns combined, the puzzles start ramping up by having you avoid obstacles and jump over massive gaps all while pumping out an electric techno inspired soundtrack. 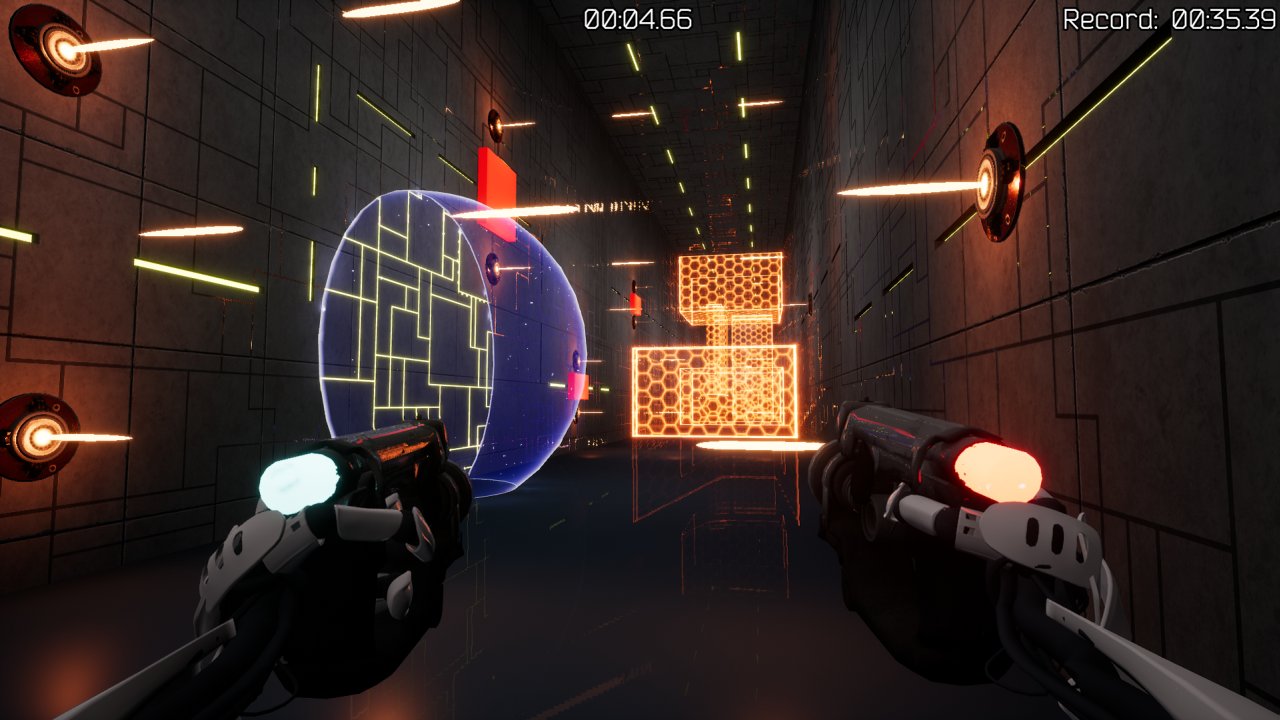 The lack of complexity from the control scheme is greatly appreciated, because the level design in Impulsion can get brutal. The biggest hurdle one will need to get over is the fact that there aren’t checkpoints in any of the levels. One mistake will reset the entire room and it certainly stings to miss the final jump by literal inches. The real challenge, though, is in timing out your blue or red shots to help propel you across gaps.

If you needed to press a specific sequence of buttons or swap through different weapons, Impulsion would be a nightmare. Instead, you’re always given access to every tool you’ll need and navigation is the main problem you’ll need to solve. Jumping into a room, assessing what the game wants from you and then executing a plan makes for some intense, fast paced action that doesn’t really let up until the final few rooms.

That is the only time I can say that Impulsion falters. While I’m sure there will be a subset of players that enjoy the stark difficulty spike that the final room provides, I did find the lack of checkpoints to be a serious problem in this closing stage. While accuracy will always be your friend, this last stage might require a bit too much to overcome. It also drags on for a bit too long, as well as putting the most difficult segment directly at the start. Dying at the end and having to begin anew is painful when the first jump is a royal pain.

That being said, I don’t have much in the way of complaints with the gameplay aspects of Impulsion. Trying to explain too much will do a disservice to the careful balancing that developer Driving Force Games has nailed. Impulsion is a simple concept with even simpler controls that just makes sense once you’re in the thick of it. The tutorial is short and sweet, the level designs alter just enough between each other and the difficulty progression feels natural and carefully calculated. 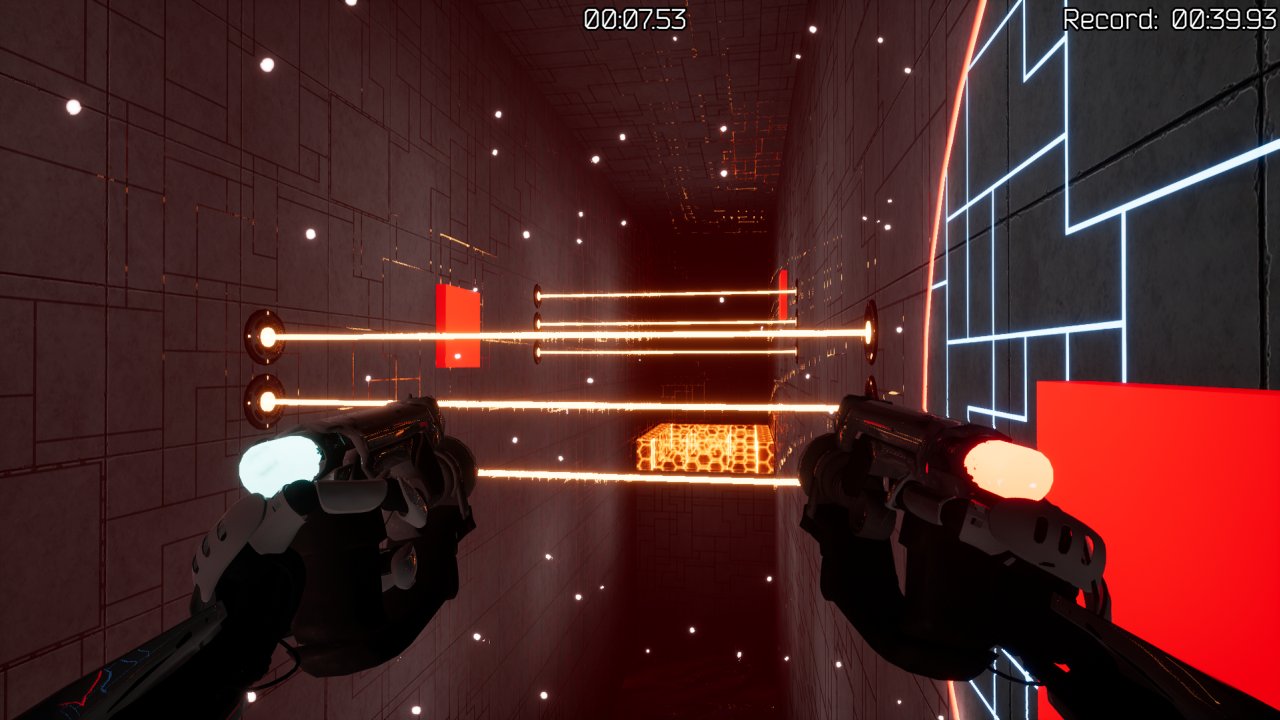 Where things start to sour is with the general presentation of Impulsion. It might be in bad faith to knock an indie project for having lackluster voice acting, but holy cow does Impulsion have some really poor voice overs. Your main character doesn’t sound a single iota like a robot, but his voice is also completely devoid of personality at every turn. It comes off like a freshman in high school trying to feign interest for his upcoming class trip.

Then there is your companion character, clearly trying to emulate GLaDOS from Portal. While I appreciate others being inspired by the humor that Valve injected into its mind bending puzzle game, you really need to understand the nuance of Valve’s script before you throw a “funny” man into your story. I honestly can’t even remember the name of the character, but his constant nagging and lame attempts at humor begin to irritate long before you reach the finale.

I know GLaDOS insulted you at every turn, but the delivery of her lines was tinged with irony and self-awareness. Not even just that, but Portal told an intriguing side story to the Half-Life universe that had already been established nearly a decade prior. Clearly Impulsion doesn’t have that kind of reverence or build-up, but it never presents any interesting ideas or explains what you’re working towards. Even the ending fails to give closure, which kind of sours the experience after enduring so many complex puzzles.

At least there are features implemented to let you skip all the dialogue. Impulsion doesn’t pester you with endless cutscenes or seize control from you to exposit in your face. The characters banter at the start of stages, but a simple press of E will let you skip lines with no ill effect. Even dying on a stage just requires you press R to start right back up. It cuts down on the tedium of load screens or repeated phrases and makes for a very snappy experience. 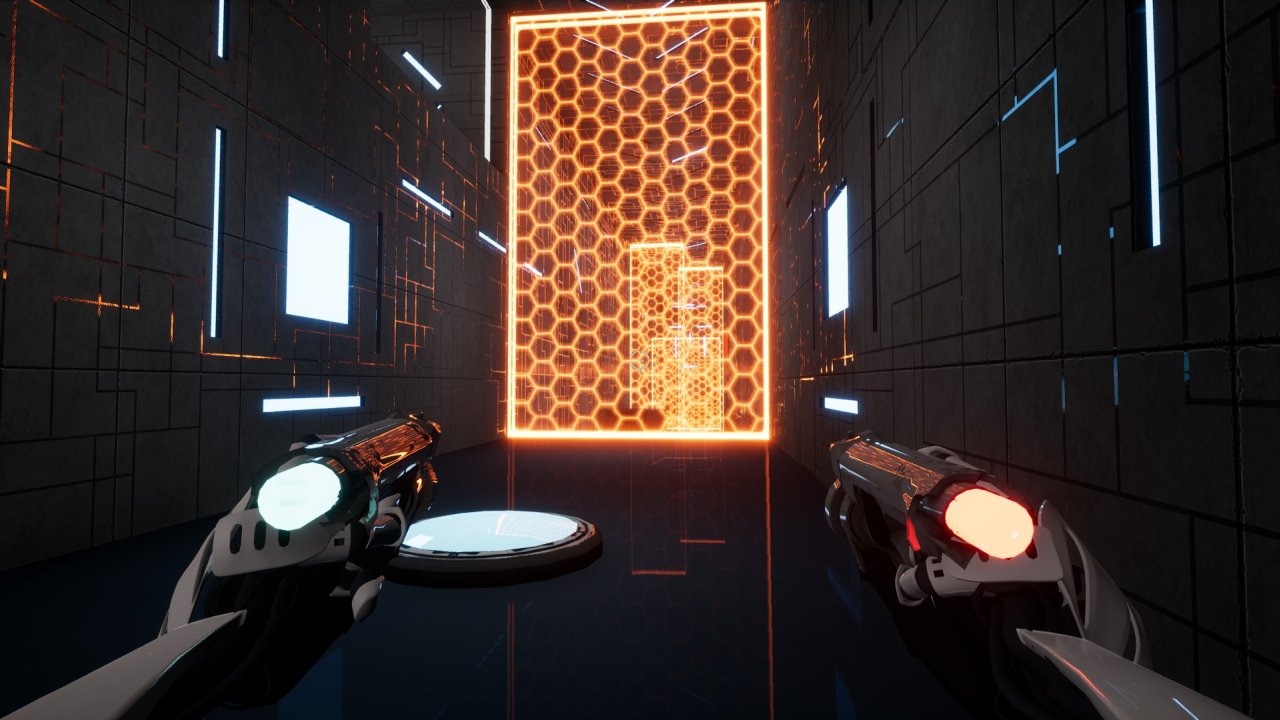 When everything is all said and done, Impulsion lasts around three hours. There aren’t any real extra modes on offer, apart from a speed running option and the ability to replay individual stages. Your mileage will vary on those, but I was perfectly content with my time spent playing Impulsion at the conclusion. It presented a clear idea, never faltered from it and didn’t waste my time. Apart from the lackluster story and low quality voice work, there isn’t anything worth complaining over that isn’t nitpicking.

Our ratings for Impulsion on PC out of 100 (Ratings FAQ)
Presentation
75
Impulsion doesn't have bleeding edge graphics, but its clean aesthetic and mixture of upbeat techno tunes makes for a satisfying experience.
Gameplay
75
Working just like many other indie platformers, Impulsion introduces concepts and then iterates on them before ramping up the difficulty and moving on. It may not be original, but it certainly is engaging.
Single Player
70
You're looking at a three hour campaign with not padding or fluff to speak of. This gets right to the point and never falters. Sadly, there isn't anything else to do once you're finished.
Multiplayer
NR
None
Performance
(Show PC Specs)
CPU: Intel Core i7-3770
GPU: Nvidia GTX 1060 6GB
RAM: 16GB DDR3
OS: Windows 10 Home

90
Impulsion runs on the Unreal 4 Engine, so it basically performs without a hitch and with extreme scalability. You're likely to never encounter issues with getting this to work.
Overall
75
Impulsion may not be the next coming of first-person platforming, but it is a solid game with good execution and no distractions. Definitely worth a playthrough.