NEXT UP HERO
Platform: PC
63
SummaryNewsArticlesVideoScreens

Next Up Hero Review

A cloud-based dungeon crawler whose concepts are diminished by repetition

I can often appreciate a good old fashioned, grindy dungeon crawler or action RPG, especially one that works off a solid mechanical foundation and showers you with satisfying rewards. Though, while these sorts of games can be fulfilling and addictive, they can also flirt with mind-numbing tedium. Unfortunately, this feeling often reared its ugly head while I grinded my way through the jumble of user-created dungeons prominent in the online-focused Next Up Hero. Couple this with some grueling and unforgivingly difficult gameplay and a recycling/reshuffling of content, and you’ve got a title that’s just tough to stick with in the long haul. 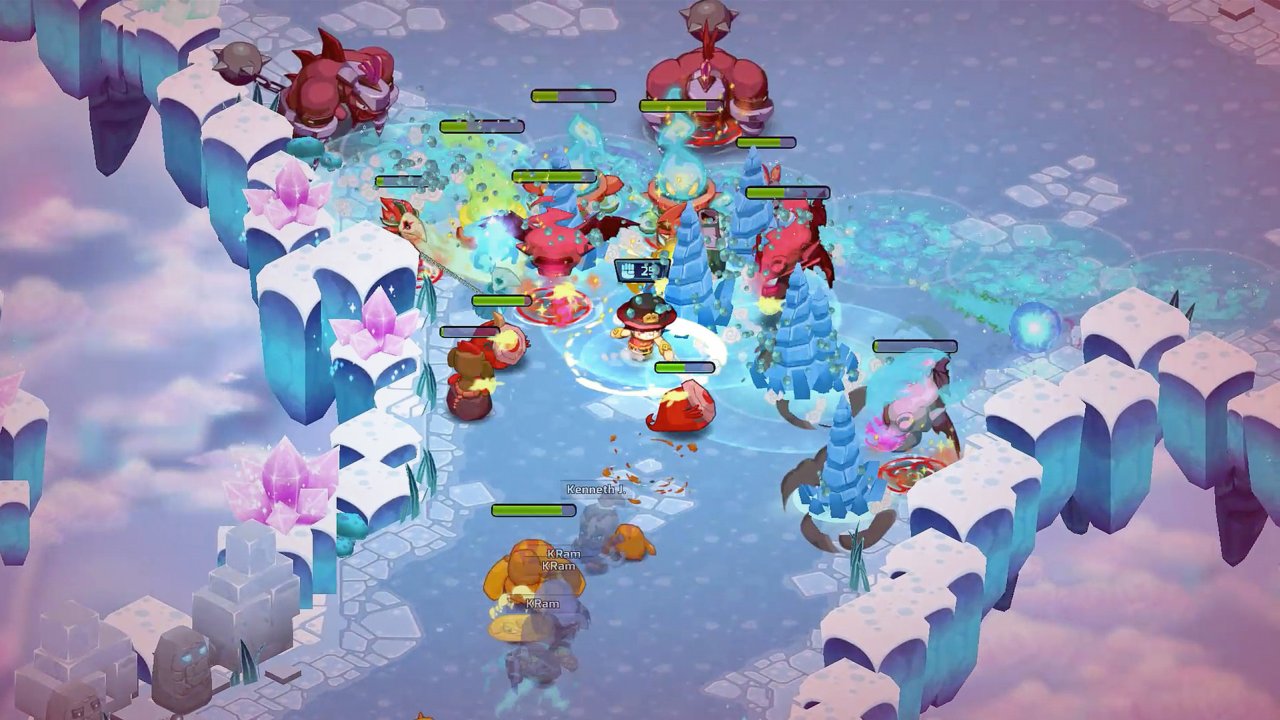 Cloud gaming bells and whistles aside, Next Up Hero is an isometric hack n’ slash with mild RPG elements at its core. It essentially requires you to spam the left and right mouse buttons to take out hordes of baddies while hopping from one basic outdoor dungeon to the next. Each stage comes with an assortment of randomly generated monsters, and you’re often thrown a curveball of unpredictable conditions you must deal with. These include hellfire raining from the sky, coins that hurt you, and even shadow versions of yourself which you must duel.

During your run, you can slowly build a army of semi-functional heroes with the ghosts of real fallen players called “Echoes”, gather coins and orbs to boost your hero, and ultimately, scramble to survive while you fight your way to an end boss. This proves a difficult feat in the long run as there are no health packs, and boss battles are usually punishingly hard. Plowing through a series of stages, known as “Ventures”, and taking out the end boss notches you a package of goodies and XP. You can then proceed to another user-created dungeon of your choice from the menu screen. Rinse and repeat.

Every Venture - or at least certain attributes and parameters - is user created, and you can even create your own on a basic level. With how punishing Next Up Hero can be, it clearly encourages the use of co-op play to make significant progress, at least indirectly by use of the Echoes. It also behooves you to unleash “Ancients” when possible, which are essentially Pokemon-on-roids, and can be summoned by cashing in a designated number of Echoes. These span from robots that boost your defense, to mechanical birds that launch bombs from the sky, to beasts that run around the map punching foes into oblivion. While these gimmicks can offer an added degree of both enjoyment and firepower in battle, they usually do little to tip the scales in your favor in the long run. Echoes in particular are pretty braindead, and really only serve as a thin buffer between you and your enemies, while Ancients are only summoned for a limited time.

The game certainly looks visually appealing, consisting of colorful cel-shaded graphics, and some charming bits of voice acting throughout. The soundtrack contains synthetic melodies that help paint the scene, but, like the gameplay itself, grow repetitive in a hurry. To its credit, Next up Hero does offer some appeal and entertainment with its fast-paced and straightforward gameplay, albeit in short bursts. I got pleasantly nostalgic Gauntlet vibes as I hacked my way through gaggles of colorful robotic and organic creatures who appeared to be plucked from a Saturday morning cartoon. 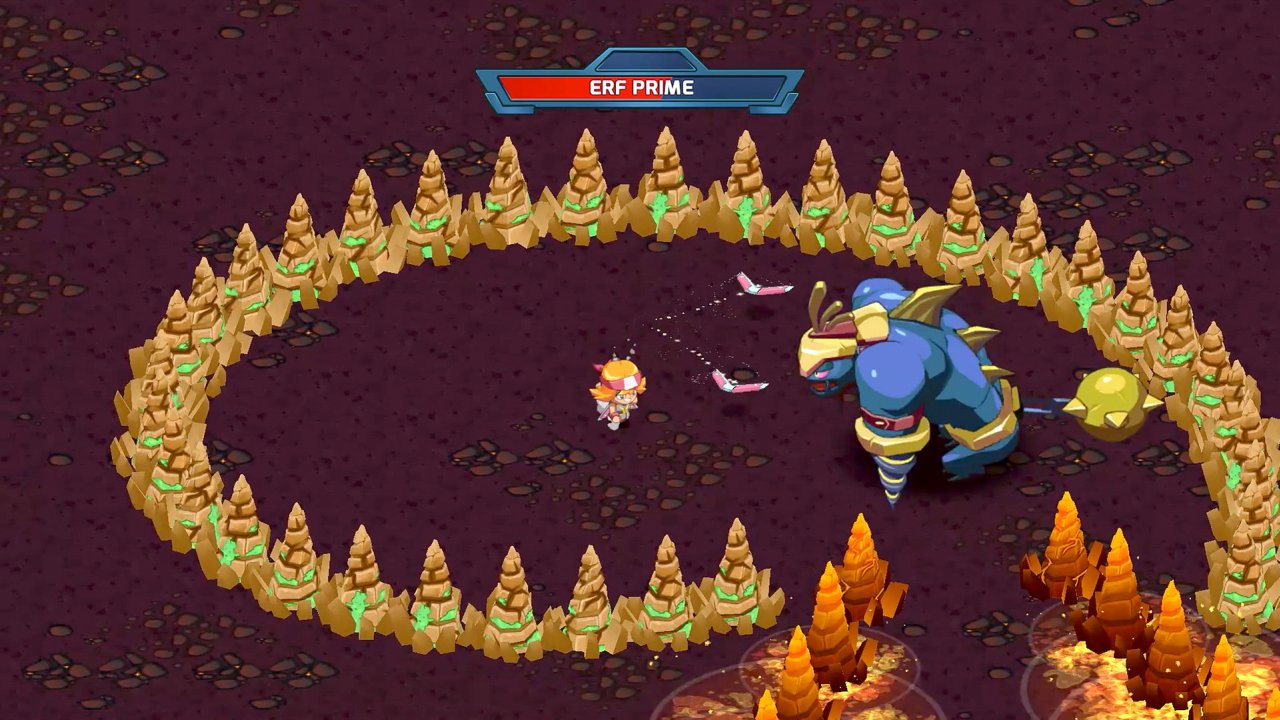 As I see it, there are a couple of ways to really milk some enjoyment out of this cloud-based dungeon crawler. The first is that you have a friend who also owns the game, since you can swap dungeons and get that useful extra firepower with relative ease. The second is if you are a streamer, as the game incorporates Mixer in a number of ways; not the least of which is being able to directly stream through the game’s menu screen. You and your viewers alike can even use chat functions to initiate various in-game commands, adding a unique dynamic that begins to take on the vibe of a military operation at a command station.

While co-op can inject some enjoyment, the single player experience is often one filled with tedium and sluggish progression. There at least exists an overarching XP system that gives you that nudge of incentive to jump into just one more dungeon. You’ll also be leveling up each individual hero separately, which can get cumbersome if you wish to play around with the several heroes included. Defeating enemies and progressing through stages will earn you XP, while snagging coins dropped by enemy mobs will count towards your individual hero's XP, or “Prestige”. These coins double as a currency system which allows you to upgrade and unlock a few more abilities that are staggered out. You’ll get two attacks off the bat, with a more powerful third attack to unlock once you’ve collected enough Prestige Coins. Much of the charm and substance of the game can be found with this diversity of heroes, each with their own dynamic, strengths, and weaknesses. However, the customization and upgrades that come with them are disappointedly limited, and did little to make an impact in my experience.

Despite the large cast of heroes, they can ultimately be boiled down to two major categories - melee and ranged. Melee types typically come with more HP, strength, and are often more agile, though they’re still pretty vulnerable as they can easily become overwhelmed by a mob of baddies. Try getting poisoned and stunned and see how much your sword, shield, or fists will help you in battle. It won’t be pretty. Getting walloped with overpowered attacks and debuffs close-range occurs far too often - especially on the tougher Ventures. Considering you have no means of restoring health outside of an online player occasionally jumping in to heal you, you’re essentially set up to fail.

Luckily, the few ranged heroes included at least provide a fighting chance, and can actually be enjoyable to play with. There are some amusing choices on this front; you’ve got Widget, who can throw down flame turrets, turning the area into a warzone; and the sci-fi-meets-steampunk Morta, who can spam missiles and pelt enemies with airborne mortars. My personal favorite is Mixtape, a duel-wielding gunner sporting slicked-back hair and stylish sunglasses that would make Mission Impossible’s Ethan Hunt jealous. This dude can pummel the enemy with large amounts of damage relatively quickly, while keeping a safe distance from his targets most of the time. It’s just a shame that the majority of the heroes aren’t designed in this fashion to level the playing field a bit more, given the constant assault of often overpowered enemies flung your way. 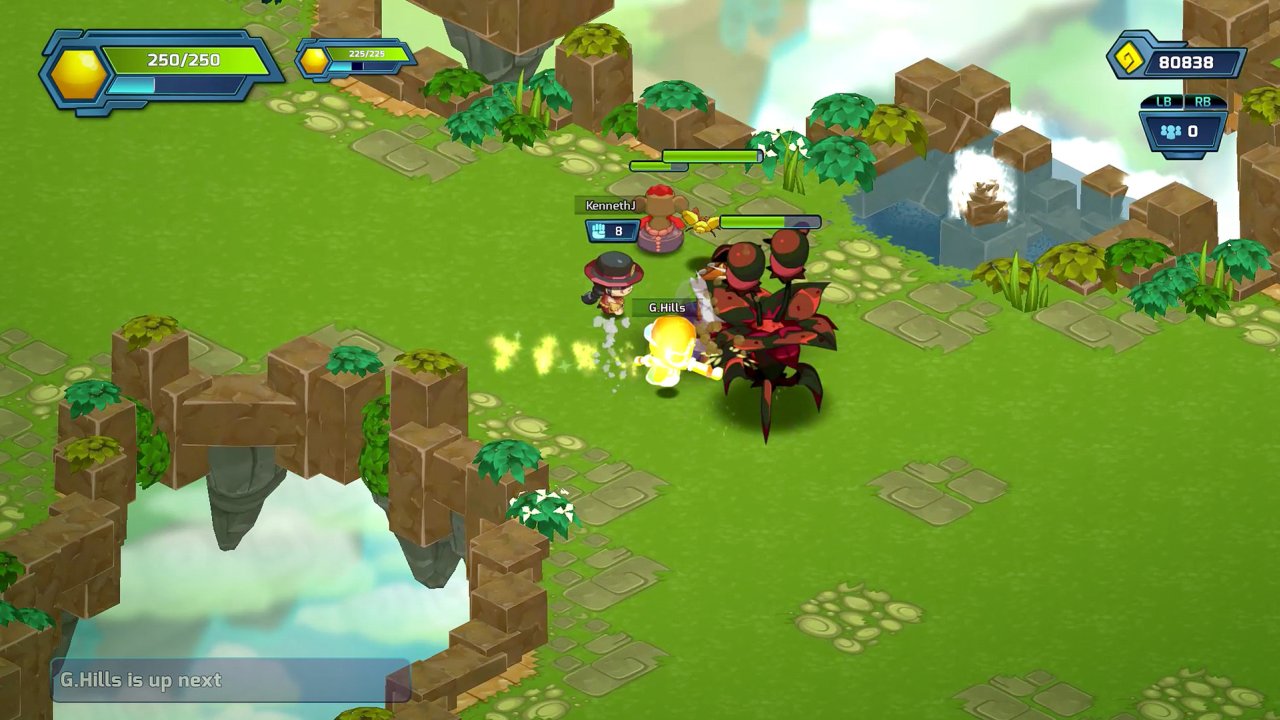 The game uses an odd system of progression that provides hints of roguelike randomization. At the same time, you’re allowed to jump back into the point where you perished, or at the point in which an online player is currently playing. This can be repeated until the Venture’s designated time limit expires. These temporary save points can - and probably should - be exploited during the otherwise ridiculous boss battles, which will usually end you before you’ve dealt significant damage. The game mercifully doesn’t recharge the boss’s health bar upon re-entering the fray, but you’ll probably still need to painstakingly return several times to finally deliver that knock-out punch.

The Ventures come in degrees of difficulty - easy, normal, hard, and insane, though based off of my experience, the proper labels should be “hard, harder, insane, and unbeatable”. You can look through an ever-changing menu and pick which one you’d like to dive into based on certain attributes. These include the number of Echoes populating each Venture, whether it can be played co-op, and the amount of stages - which can be as few as 5, and can soar to crazy heights numbering several dozen. You can pick between your basic forest, ice, desert, or lava dungeon, though the differences these provide are mostly aesthetic. The harder ventures will need to be unlocked by gaining XP and leveling up.

You’ll also be able to scan through “Featured Ventures”, which showcase popular dungeons amongst the community, and can additionally view online leaderboards. On top of this, you’ll notice a Champion Trial mode, which is essentially a developer-created string of dungeons which provide a marathon session of tricky stages, tied together by an overworld map. If there is any sort of endgame, this would be it, as it requires a high level to unlock, promises ample rewards upon completion, and rests smack-dab in the middle of the menu selection screen. Still, there’s little variance found here, and thus little incentive to reach it.

While trekking across the cookie-cutter isometric dungeons can grow old quickly, what of the game’s other major selling point - the dungeon creator? Well, unfortunately it’s not quite as neat as it sounds, as its features are limited, and you aren’t even permitted to play your own creations. To its credit, Next Up Hero does cleverly use this feature as yet another way to shower you with rewards - as a player failing to complete your dungeon will land you a package of goodies. From a gameplay standpoint, however, it adds little of substance on your end, since it’s more of a customization menu than an actual dungeon maker. 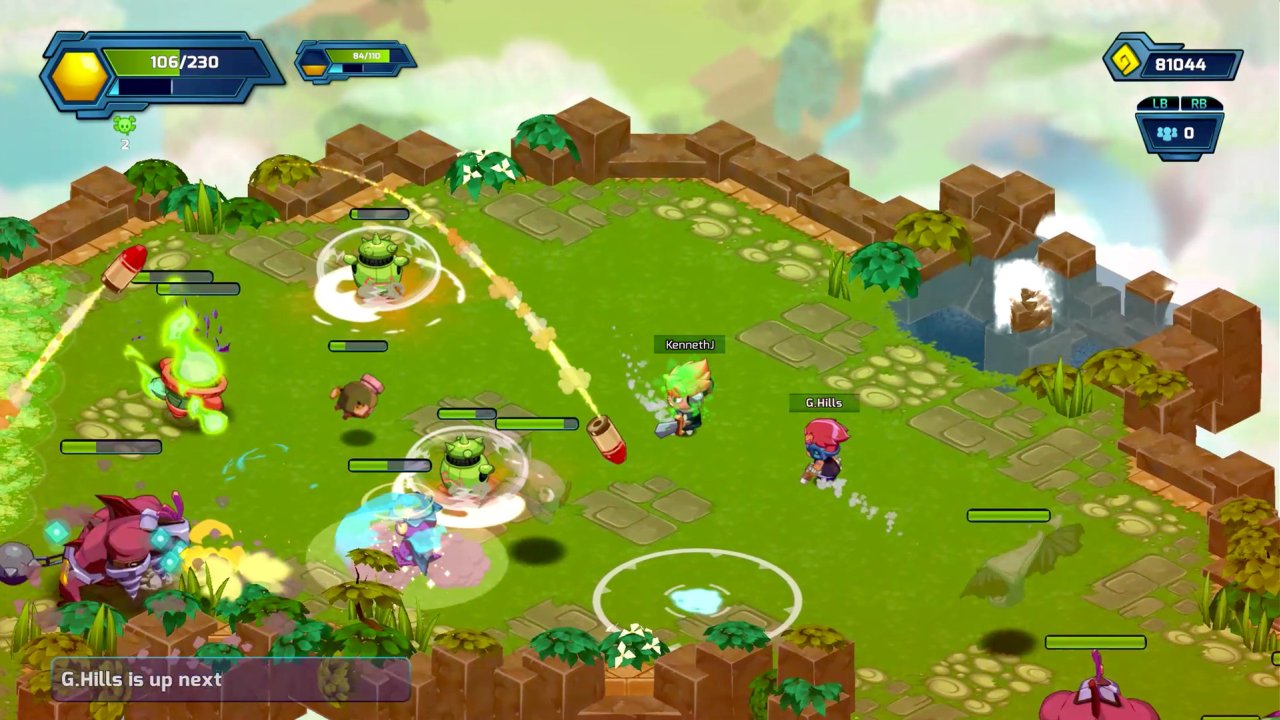 Ultimately, Next Up Hero does contain some interesting concepts and at least functional gameplay at its core which offers glimpses of fun. Though it also contains a monotonous blandness and most of it never seems fully realized. Thus, the game can feel off-putting and unsatisfying, even while obtaining the myriad of rewards the game throws at you in an attempt to keep you playing. It doesn’t help that you’ve got a slow, laborious, and unimpactful system of progression, grueling difficulty, and restrictive online gameplay centered around timed “events” and generic dungeons.

Our ratings for Next Up Hero on PC out of 100 (Ratings FAQ)
Presentation
65
Crisp and colorful visuals help paint the scene along with some charming minimalistic voice acting. The music, while competent and appealing at times, grows repetitive in a hurry.
Gameplay
60
Works at a core level - reliable mechanics and fast-twitch gameplay. While the content is virtually unlimited, there’s little variety outside the heroes to keep you engaged, and the cumbersome, minimalistic progression doesn’t help. Enjoyable at least in short bursts, but doesn’t quite hold up.
Single Player
55
Not only can the game feel dull in this area, but also unfairly difficult, even once you’ve recruited a band of Echoes. There is an endless amount of content with the user-created dungeons, but most feel very similar.
Multiplayer
70
The gameplay flourishes far more vividly here, though be sure to have a friend or two that owns the game, as the random online matchups can be rare and unreliable.
Performance
70
The load times, coupled with the process of connecting to the servers can grow lengthy, and I had a couple instances where I got booted from ventures.
Overall
63
Next Up Hero feels a bit more like an online app or a means of promoting Mixer rather than a fully realized game. If you happen to have the Xbox Game Pass, this might be worth giving a try, just don't expect much substance or variety. 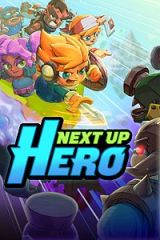