A worthy conclusion to a great trilogy

There are few trilogies in video games that string together a single narrative. Even Mass Effect, a planned trilogy, features three games that stand largely on their own with recurring characters, rather than three pieces of a larger whole. When you think about it, most of our media has left this kind of storytelling behind. The highest grossing movies these days are trying to build universes with loose connections between entries, rather than stories that continue through multiple chapters. It makes The Banner Saga unique and the third entry reminds me why the trilogy structure is largely a thing of the past – it can be hard to stick the landing. 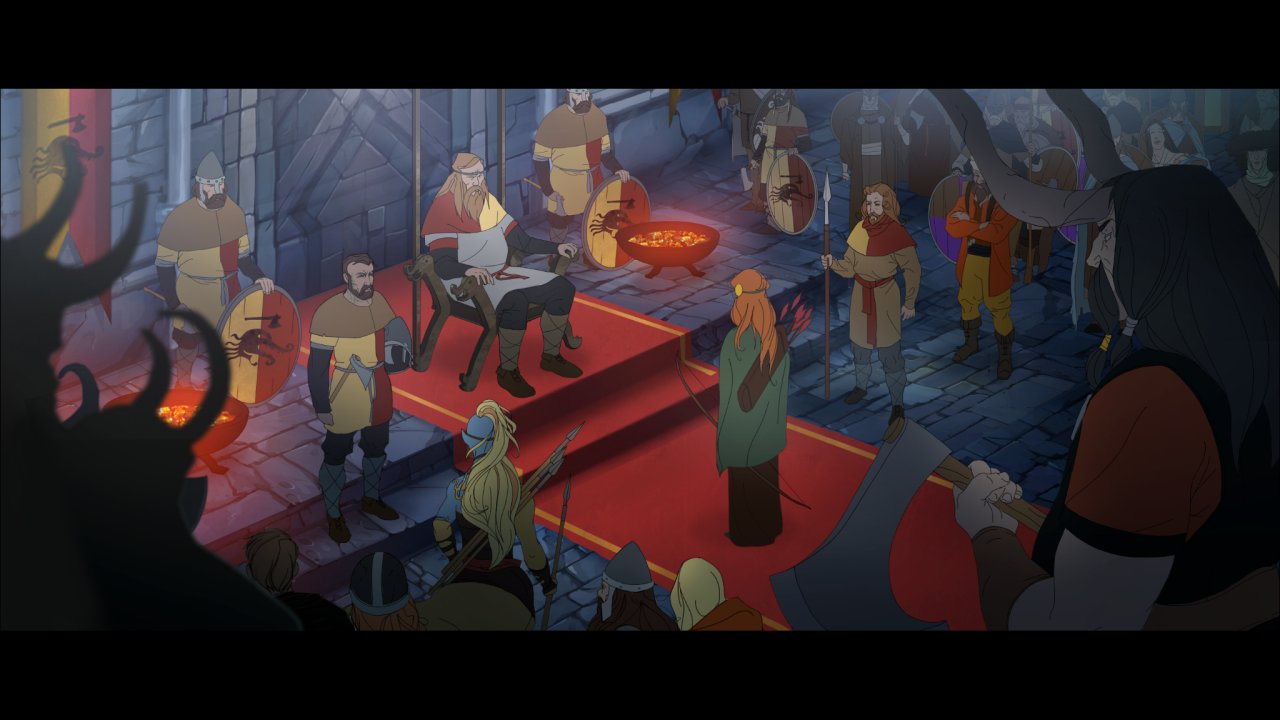 That’s what might be the most impressive thing about The Banner Saga 3. Pegged with being the climactic chapter that has to wrap everything up, Stoic’s final entry is a solid piece of work. While it might not be the highest point of the series, it makes good on the arcs of the characters, the climax of the narrative, and evolves the gameplay to better support the final chapter. It won’t convert those who have been lukewarm on the series thus far, but it’s not supposed to. The only thing the game has to do is deliver a solid ending to what has been an excellent fantasy RPG series, and it does that quite well.

The Banner Saga 3 lets you once again assume the roles of Rook and Alette, still leading their clan through the end of the world. However, this time there’s nowhere to run and no far-off destination to reach - the darkness that was first glimpsed in The Banner Saga 2 has come for Arberrang and the human capital is the last safe place for men, Varl, and Horseborn. The Banner Saga has long been a series where things can always get worse and in The Banner Saga 3, things get about as bad they possibly could. The last stronghold is besieged by the full might of the Dredge army, the stone-like monsters from the previous two games, while also constantly under threat of revolt led by the ever-plotting governor, Rugga. But there are also new enemies: the Warped, inhabitants that have been consumed by the darkness.

While Rook/Alette try to hold out in Arberrang, Iver, Eyvind, and Juno attempt to undo the darkness by journeying into it. This part of the story is told from Iver’s perspective as he and the remnants of the Ravens mercenary group wander through the mysterious world. I referred to The Banner Saga 2 as the dark middle chapter, but suffice it to say that The Banner Saga 3 is pitch black. At times, I found the game difficult to play as the darkness closed in around Arberrang, Iver’s faith in his companions waned, and things look about as grim as possible. The moments of respite and joy found in the first game and occasionally in the sequel are almost all but absent this time around. Everything just sucks.

Is it the narrative conclusion that you were waiting for? I don’t know if I can really answer that - I think your mileage may vary depending upon how much you’ve already predicted and how willing you are to intentionally mess things up. I will say that a consistent flaw in all three games (but especially 2 and 3) is that the endings feel a little rushed. Despite Stoic Studio's impressive ability to create two divergent narratives that are effectively used to complete a larger narrative framework, there is usually one storyline that gets an exciting ending and another that abruptly finishes without much fanfare. Still, the writing of the trilogy has always been strong and Stoic knows the world well enough to build a compelling drama in their sleep. The core of The Banner Saga 3 is just as good as the last two games. 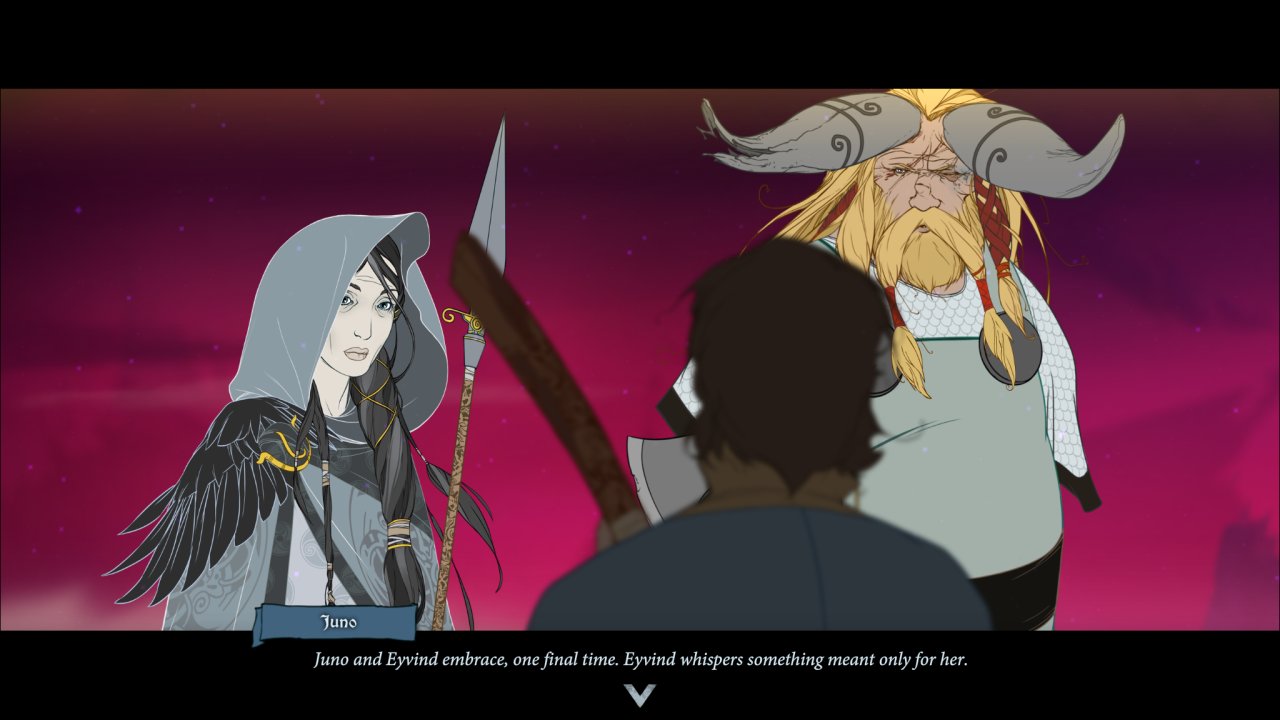 Some may still have concerns about the amount of choice in The Banner Saga 3 - or how much choice affects the ending. Much like the second game, a few major choices influence the story - mostly relating to who you’re playing as and who you have with you as companions. Yet, anyone who is hoping for something revolutionary in how things play out is bound to be disappointed. I feel like by now expectations should be pretty grounded for games with branching narratives, but if you’re hoping The Banner Saga 3 will buck this trend, you’re going to be disappointed.

Far more interesting is how differently The Banner Saga 3 plays than the first two games. In The Banner Saga 2, I pointed out how the game didn’t really change much in the sequel. Clansmen and a couple of other small features were implemented, but it was mostly more of the same. The Banner Saga 3 is a decidedly different game than the first two, something that is forced by the narrative. Since Rook/Alette are stuck in Arberrang, the Oregon Trail-esque gameplay has been altered. You can still take people under your Banner and stories play out within the walls while you’re trying to defend them, but the traveling from town to town aspect has been lost. That’s not bad, necessarily. In fact, it does allow the game to continue its drive to be grim and depressing. In previous games it felt like Rook/Alette and their clan could outrun the darkness and Dredge, if they could only keep moving. This time, there’s nowhere to run. So, you take refugees under your banner, you argue with Arberrang officials, you give commands to hold the walls, but it’s clear that your only hope is to hold out until Iver and company can solve the problem from within.

Which brings us to the other half of the game, following Iver, Juno, and Eyvind as they journey through the darkness, hoping to rid the world of it. The company is pursued by the undead Bolverk, one of the protagonists from The Banner Saga 2. While The Banner Saga 3 doesn’t pull any punches, it’s in Iver’s story that the gameplay becomes the most difficult. About halfway through the game, the resources, troops, and battles won in Arberrang are converted into a ticking clock that counts down to Arberrang’s destruction. If Juno and Eyvind don’t reach their destination in that time, all remaining peoples will be destroyed. So where in previous games you could stock up on supplies and rest your characters to keep everyone healthy, you’re almost assuredly going to be throwing wounded people into battle, meaning they’ll have worse stats and face more difficulty defeating Bolverk. 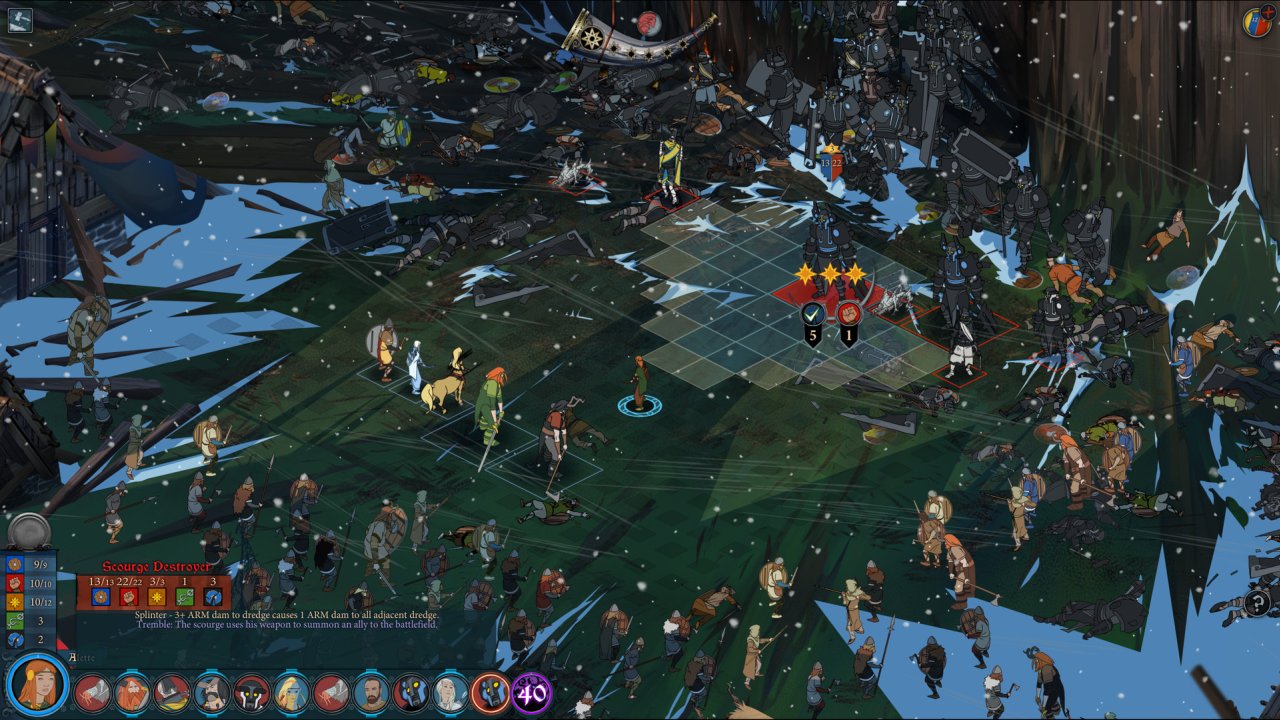 The combat plays out in the familiar, grid-based strategy mechanics of the last two games. Not much has changed here aside from the new enemies and the new allies, which includes the Dredge. And it is fun to get an opportunity to play as the stone adversaries of the series as a few of the Dredge join both parts of the story. The prevailing strategy is still to consistently break down enemies' armor before dealing damage. After some fights, more waves of enemies arrive and you’ll have to decide whether to keep fighting and earn more renown or pull back and protect your fighters. This happens more often in Rook/Alette’s story as they defend Arberrang. Another change in the gameplay comes in how characters level up. Soon, you’ll find a character topping out their stats - when this happens, you must place points into special passive abilities, like resisting armor damage or regaining willpower points.

The gameplay is probably the highlight of The Banner Saga 3. The feeling of dread that takes a hold of you as you worry about whether or not Arberrang can hold out is significant, and the ticking clock puts a lot of pressure on Iver, Juno, and Eyvind to complete their mission as fast as they can. It’s a nice marriage of mechanics and narrative that works in favor for the game. Playthroughs will differ, but it led to me having to navigate a bloodied and battered group of Ravens into a climactic fight that played out in dramatic fashion. It felt like with many fights I was winning by the skin of my teeth.

Another highlight of The Banner Saga 3 is how great the game looks. Each entry has significantly improved its production values and The Banner Saga 3 is likely the closest realization of Stoic’s true vision for the series. There is an animated cutscene for most chapters and the locations have never been more beautifully rendered. This series continues to use color in interesting ways, from the red of the banners to the gloomy blackish-purple of the darkness. But one can’t overlook the very composition of how Stoic arranges their backgrounds and character designs. The art of the series has always been excellent and at this point, with the additional cutscenes and expanded budget, Stoic is just showing off. Adding to the effect is another solid score from composer Austin Wintory. In this game, Wintory takes his previous work and distorts it, creating a dissonant sound that is in line with the other-worldly nature of the darkness - a melancholy effort that is as strange as it is beautiful.

The Banner Saga 3 is also solid tech-wise. I had one crash during my time with the game, but it snaps between loading screens, cutscenes, and dialogue without much issue. The game still isn’t technically ambitious, but it stays within its means to keep things moving - which is important in narrative games like this. It’s also worth mentioning that The Banner Saga 3 is a shorter affair than the previous entries. My playthrough clocked in at around 8 hours, a few shy of my time with the first two. 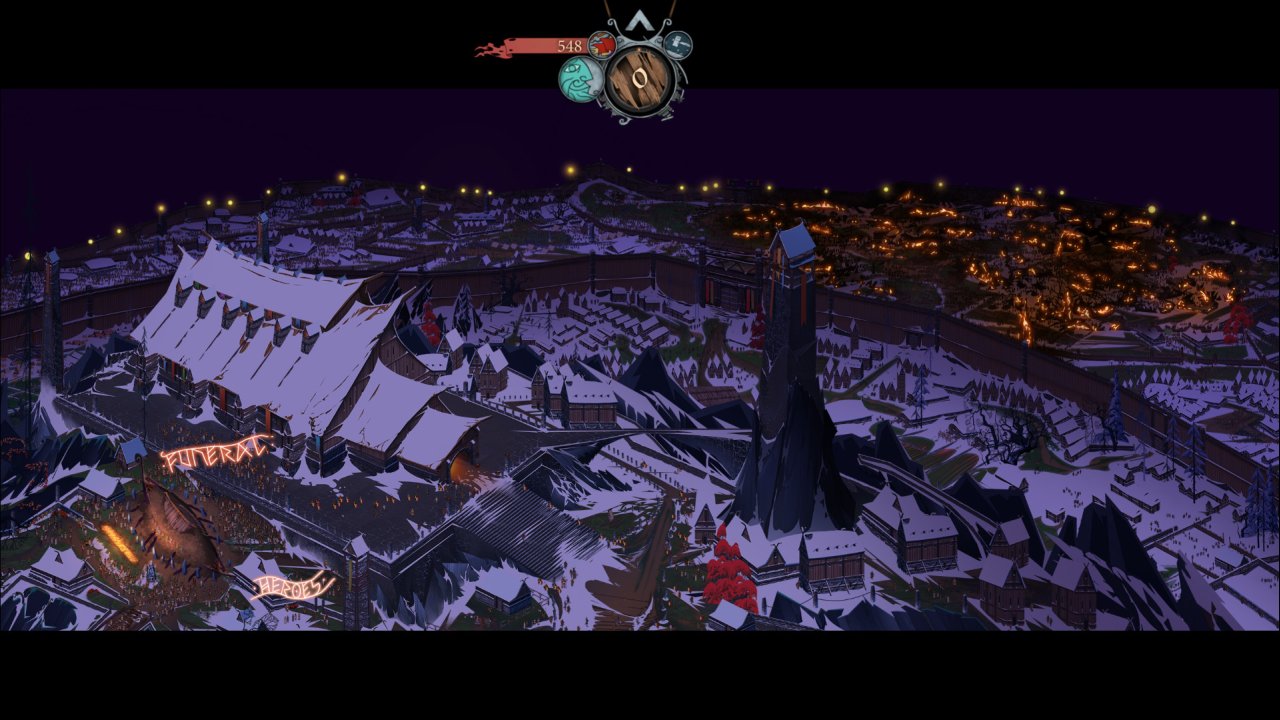 The Banner Saga 3 is a satisfying conclusion to a wonderful trilogy. It changes its gameplay in interesting ways to accommodate the narrative and delivers a nice wrap-up for its characters. It’s a moody, at times depressing, piece of work that challenges the player, mirroring its grim, desperate world with equally grim and desperate gameplay. Fans who have followed the trilogy from its Kickstarter beginnings back in the spring of 2012 to this final chapter are in for a real treat. The gameplay tweaks are smart, as Stoic uses innovative ideas to keep the core of the mechanics similar to previous entries while changing them enough to build suspense through the systems of the game. Hats off to the team on capping off their saga - I’m going to miss these characters and the fascinating world they fought, loved, and survived in.

Our ratings for The Banner Saga 3 on PC out of 100 (Ratings FAQ)
Presentation
95
As if the art of the previous games wasn’t good enough, there are more cutscenes and more grandiose visuals. It’s a stunning piece of a work.
Gameplay
84
While the previous game treaded water in terms of the gameplay, The Banner Saga 3 does a nice job of changing things up to better suit the narrative. The game builds suspense and tension through a ticking clock mechanics that is ingenious.
Single Player
75
The writing and narrative are still solid and Stoic manages to deliver a satisfying conclusion to the series, but part of the ending gets shortchanged.
Multiplayer
NR
None
Performance
(Show PC Specs)
CPU: Intel Core i5-3570K
GPU: Nvidia GeForce GTX 660
RAM: 8GB
OS: Windows 10 Home 64 bit

85
I had one crash, but most of the game was smooth sailing with fairly quick loading screens.
Overall
83
The Banner Saga 3 is a satisfying conclusion to the trilogy, offering a solid end to the narrative with inventive ways to keep the gameplay fresh. This last chapter is a great game on its own, but it also completes a series that has been exceptionally consistent in quality, which is worth appreciating.

All videos for The Banner Saga 3 (1)
Advertisement ▼