THE FREE ONES
Platform: PC
63
SummaryNewsArticlesVideoScreens

The Free Ones Review

Swing your way to freedom

When you think of first person platforming games, few examples come to mind, with Mirror's Edge probably being the most prominent. It's a corner of the genre that's difficult to design and execute effectively. The limited view means you can't go wild with level design or ask players to create head-spinning turns mid-jump, and it's tough to make the experience complex and engaging. Some have attempted to do so, and the examples usually come from the smaller developers that enjoy taking risks, rather than big established studios. The Free Ones is one such title, letting players run, jump and pull themselves across large chasms and cliffs, in hopes of escaping an oppressive island. 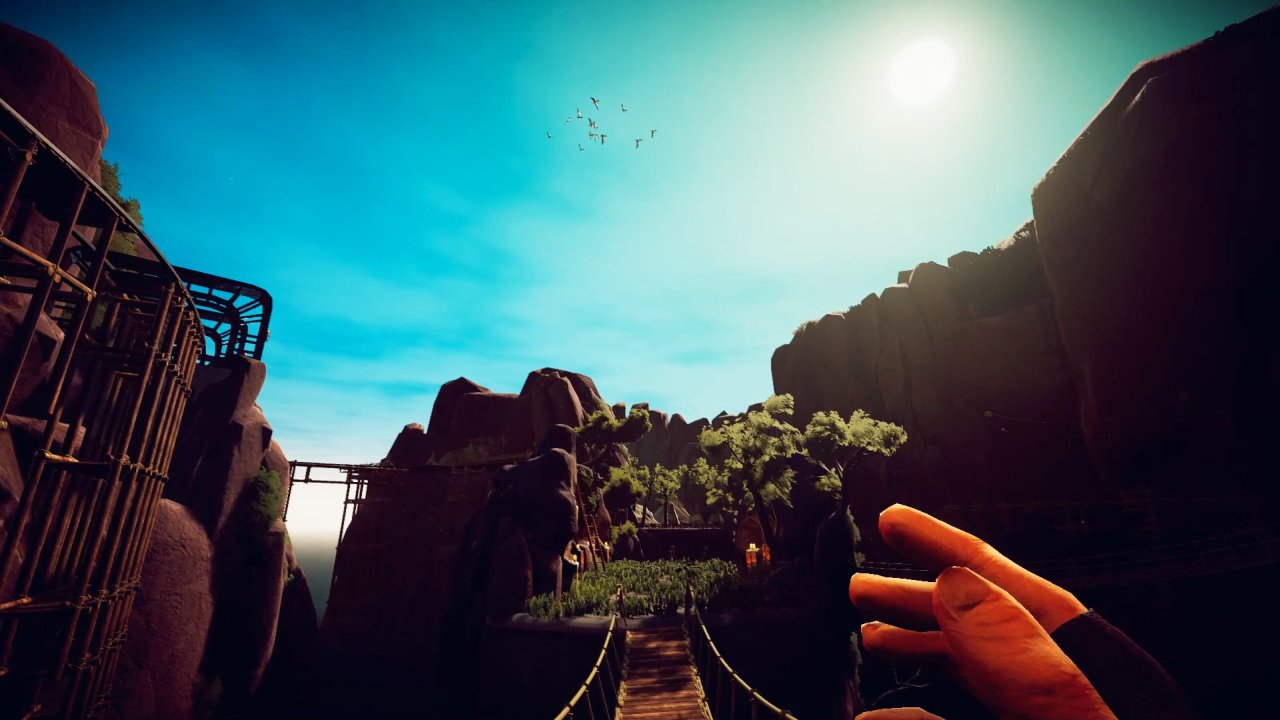 The Free Ones lets players assume the role of a man named Theo. He was kidnapped at an early age and brought to an island to work in the mines. One day though, he follows a bird that leads him to an encampment of escapee workers, who are trying to get back home. He meets Lana, the only other voiced character in the game, and together they decide they can escape this place and return to the continent. To do so, Lana sends you out on a few different missions to restore the power and activate the train tracks. While doing so, you also discover that the island has a deadly secret which eventually comes to a head. Lana is the only person you talk to via radio, and both these lead characters are rather generic and the dialogue leaves much to be desired. Still, the game only lasts about 3 hours, depending on your skill and desire to grab collectibles, so it doesn't outstay its welcome.

The story is rather thin on details, to the point where it feels lazy rather than purposefully ambiguous. We know of "the island" that the mine is on, and "the continent" where everyone is apparently trying to return to. We never see any enemies, or guards, or anyone apart from other workers, nor any security systems. The kidnappers are only referred to as "they". The characters keep speaking of their own few escapees, as well as potential other groups, but the scope of the story never feels greater than a couple of people involved. The game takes place at night to "avoid suspicion", but again, it feels like a retrofitted excuse for the visual design. Also unexplained are Theo's abilities. The game doesn't suggest that anything supernatural going on, and yet from the outset Theo can run and jump great distances, and takes no fall damage regardless of height. Everything about the narrative just seems to be here because it has to be, not because the developers actually wanted to tell a story or tie it into the gameplay convincingly.

Thankfully, the gameplay does manage to stand on its own. The Free Ones is a first person platformer where your only tool is a grappling hook. You'll likely be reminded of a low-key Just Cause experience, or A Story About My Uncle. You can sprint and jump fairly long distances, and as mentioned, take no damage from hitting walls or falling. There's no health system of any kind – the levels take place above either an abyss or water, so your only means of failure is just falling into them. The controls are simple – you aim the cursor as you would in any first person shooter, and when it hovers over a wooden surface (the only surface that can let you attach), you press the left mouse button to shoot the grapple and it pulls you forward with great momentum. You can either ride it all the way and attach yourself to the grapple point, or you can jump while being pulled, which will fling you above/to the side of the object you're attached to. 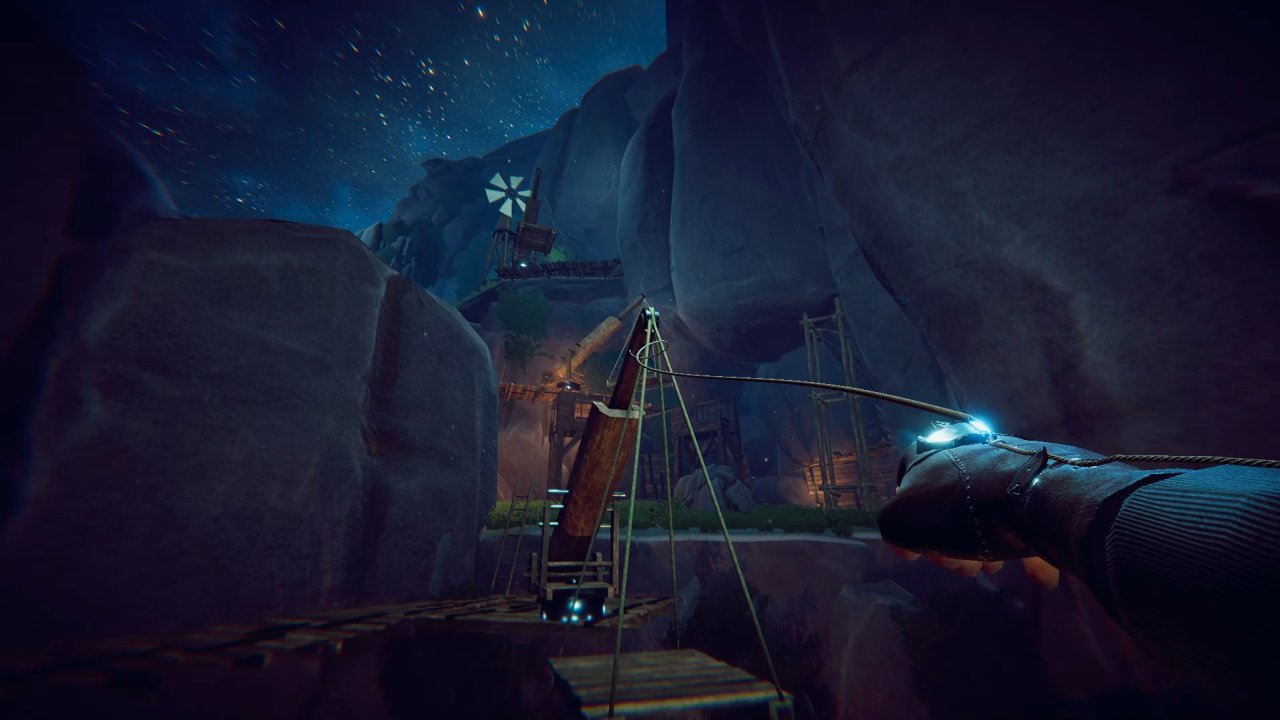 It's a straightforward set of movement mechanics that works, and the controls feel responsive, giving you just enough control mid-air to aim for the next grapple point or to land on safe ground. A little later on, you also get a wing suit, which lets you fly forward for a brief period, again so you can be within range of grappling that next ledge. To make things fair, players only have 3 shots of their grapple hook before they must stand on any surface and reload. The glider requires you to stand on proper land before it can be used again. All of this put together, The Free Ones offers some exciting moments of swinging and has a good sense of speed. While fun, the last hour definitely presents some of the toughest sections requiring good timing, precision aiming, and certainly some luck.

The game world is appropriately filled with wooden materials to grapple into, in the form of scaffolding, crates, fences, and so on. While this allows for some fun gameplay opportunities, it also makes little sense in the game world. There are crates suspended mid-air over huge chasms that seem to have no business being there, trains that run on rails high above ground, and so on. Just like Theo's immunity to damage, the game seemingly chooses not to explain this very much, instead egging you onwards to the next big swing. The levels you'll visit are linear, and will require planning to swing around obstacles. You could be atop a moving train, but have to swing around a small mountain to get back on, and so forth. Or you could be in front of a big chasm with suspended moving boxes, and have to grapple your way across. The entirety of the levels are designed on presenting the player with new grappling challenges to overcome. Thanks to a decently generous checkpoint system, things don't get too frustrating.

While the environments are entirely static, with so much player movement freedom, there are possibilities of glitching out or getting stuck. It doesn't happen too often, but when it does it's mostly amusing. There is a reset checkpoint option in the menu for such cases. Most often, you'll get stuck on a wall while falling into the abyss, and have to reset the checkpoint; or you could even cheat and grapple back out. Oddly, despite the levels being linear and freely traversable, the game doesn't let you backtrack (for example if you just noticed a collectible down below), resetting you back to the most recent new checkpoint. Those collectibles are flags throughout the levels, often placed in very precarious spots. Touching them is not enough – you must return safely to solid ground for the pickup to count. 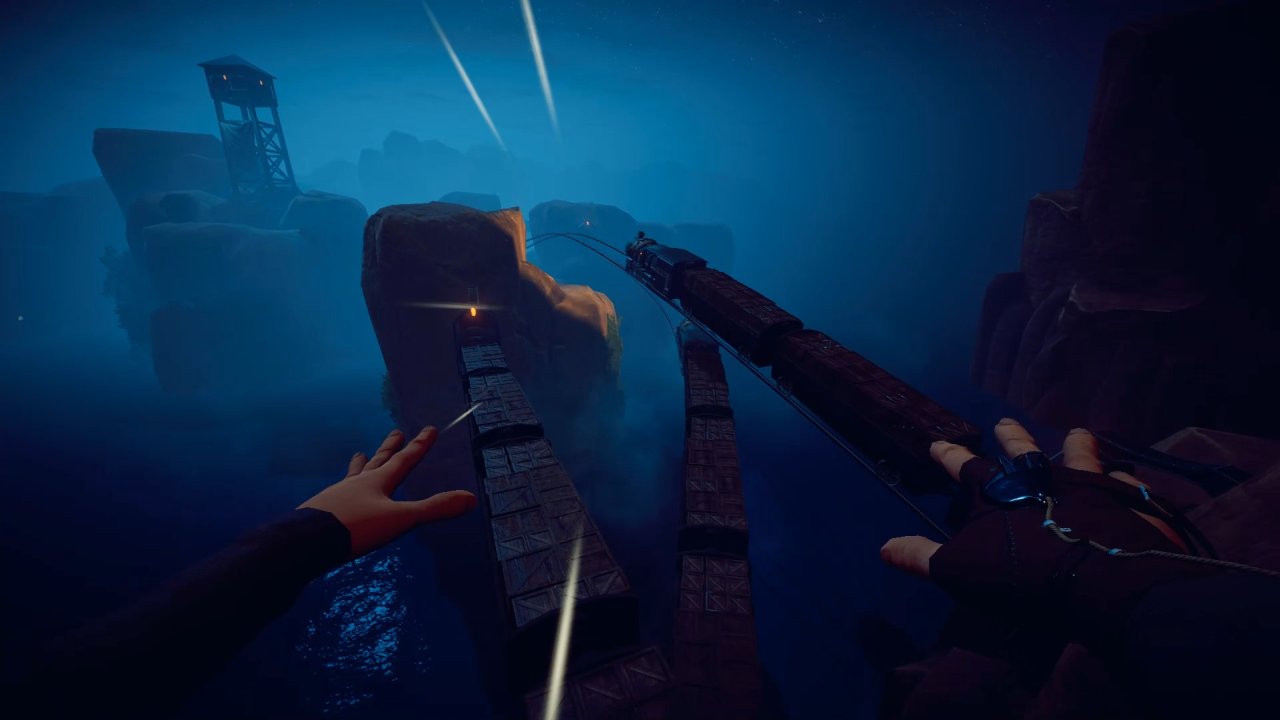 As mentioned, the game takes place at night, but this is likely due to wanting to limit the player view within the budget of the game. The setting is very generic – the island and its characters have no personality or unique look to them. It looks decent from a technical perspective, but otherwise offers little visual flair. Some of the tunes on the soundtrack are impressively well made, but they are too rare.

The Free Ones manages to execute its first person platforming ideas well. It's a little bit glitchy at times and much of the game, from story to level design, sacrifices itself for the sake of putting the players through the grappling paces. Still, it does that core gameplay component well enough that it almost makes you forget about the various shortcomings. The visuals are competent, if bland, and the controls are satisfying. It doesn't outstay its welcome with about 3 hours of content and some collectibles along the way, and the $15 asking price is very reasonable. If you're in the mood to spend a few hours with a fairly unique and decently executed gameplay mechanic, The Free Ones might just work.

90
No issues, and not overly demanding
Overall
63
The Free Ones puts the grapple gameplay mechanic above all else, which manages to produce enough thrills and momentum to carry the game to its conclusion, across chasms where story and presentation should be. 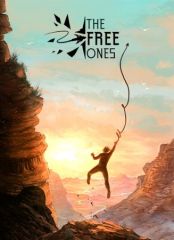