Lost in Harmony experiences something of a U-turn after its opening stage. The result of a collaboration between artist Wyclef Jean and Valiant Hearts co-creator, Yoan Fanise, the rhythm-game-meets-runner was recently ported from its admired iOS home to the PC. Admittedly, the PC controls can be fiddly starting off, which beneath the attractive visuals and high-octane score may at first - I fear - have some rather disappointed. But stay with it. Do stay with it. 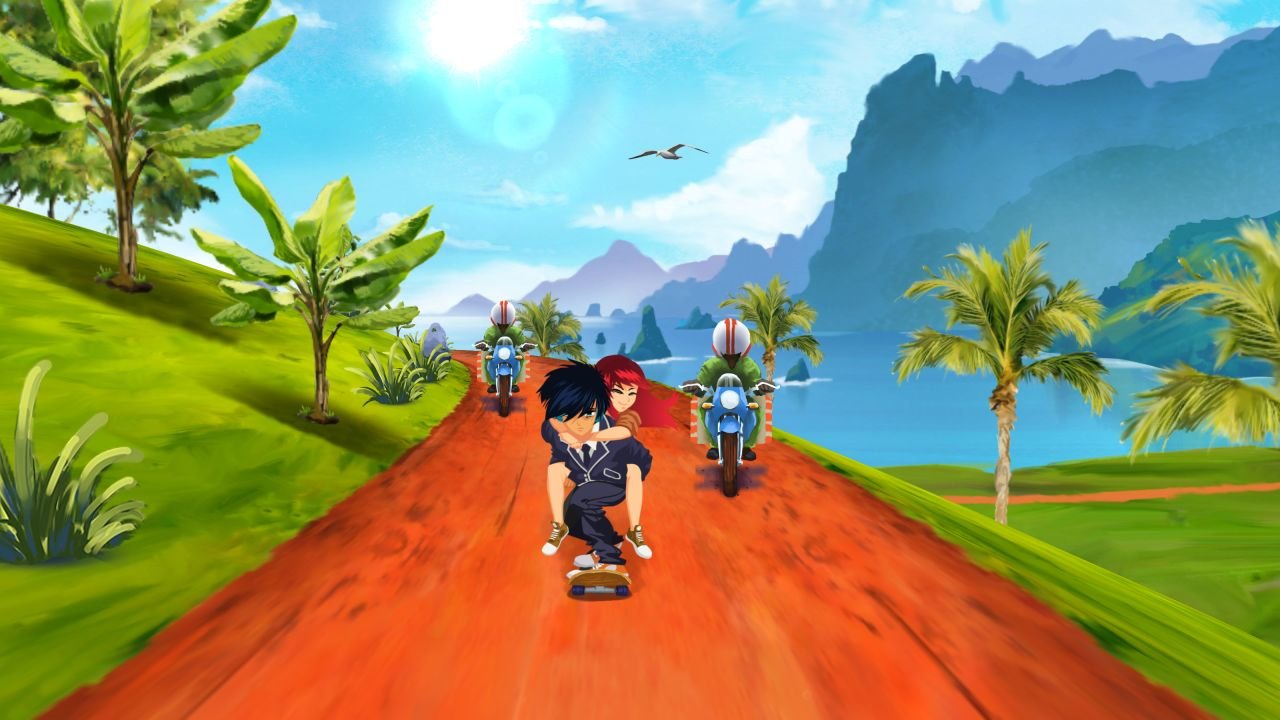 I say this, because once I had a handle on the controls, the story that ultimately emerged was - in actual fact - rather sweet. The protagonist is Kaito; an angsty, headphone-wearing adolescent who at first appears a walking anime trope. Following the opening stage, however, it transpires Kaito’s moodiness is for good reason: his best friend, Aya has fallen seriously ill, and in response he imagines whisking her away on his skateboard to fantastic worlds filled with whimsical sights. Bolstered by an intense soundtrack, the journey becomes a touching tale of harmony between friends in the face of Aya’s illness, and it’s a harmony in which the player participates through the game’s musically choreographed stages.

In the original iOS port that released in 2016, the player dodges obstacles and lands notes by tapping and swiping the screen, and timed taps on spots which appear on screen. On the PC, you control the character using the keyboard’s arrow keys, and register timed notes using the conveniently placed S, D F and G keys.

To players who prefer distinct buttons to points on a flat touchscreen, Lost in Harmony may end up being more comfortable on the PC. This said, there do appear to be some oversights that make playing the port initially cumbersome. Controls are arguably more self-explanatory on a smartphone; the impulse is to tap the shining orbs representing musical beats as they appear on the screen, so there’s arguably more room to place players straight into Kaito’s dreamworld without much introduction. By replacing the orb icons with a horizontally-scrolling bar with icons mapped to specific keys, keeping up with the speed is significantly fiddlier on the keyboard, than when tapping and swiping points on a screen.

It’s true, however, that Lost in Harmony ultimately finds more confidence as a runner than a precise rhythm game. Kaito’s daydreams move in sync with the sounds blaring through his headphones, with oncoming obstacles and enemies aligning with the musical ebbs and flows. As the friends’ adventure continues, the satisfaction of Harmony comes from losing yourself within the melody, letting all movement channel the rhythm of the track. 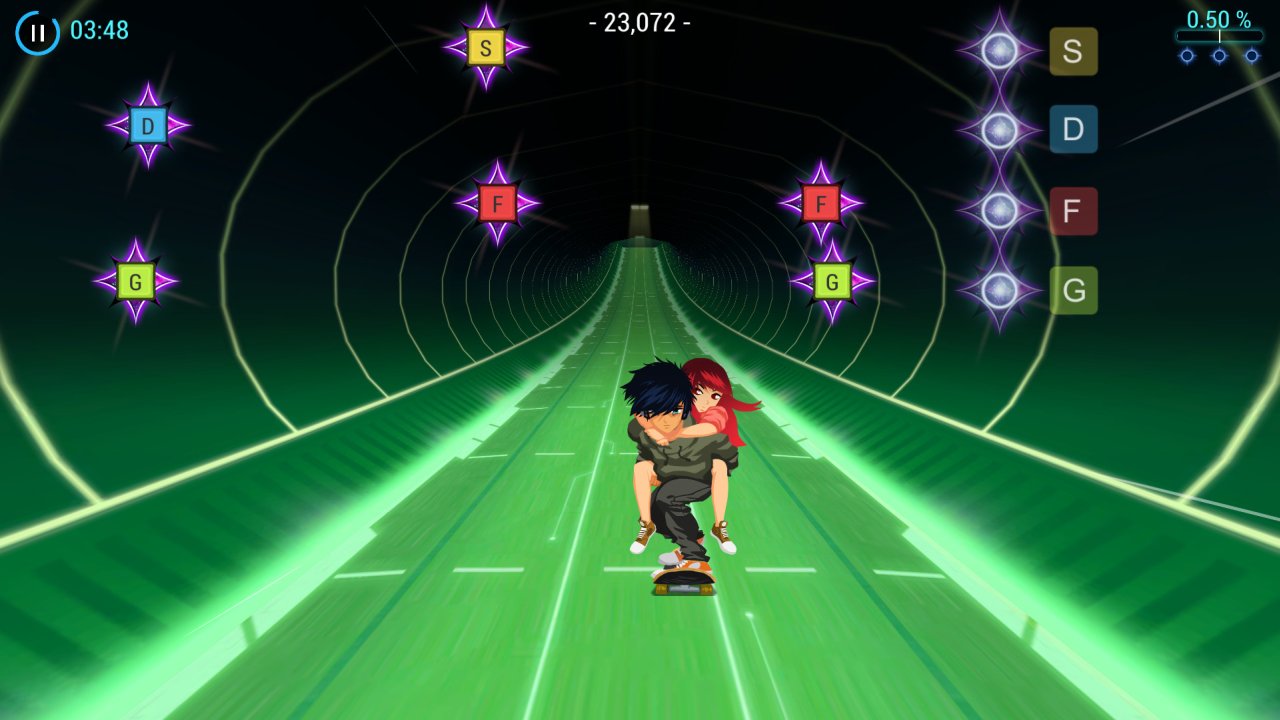 It helps that Kaito’s tastes are eclectic enough to give each stage distinct memorability. While the opening stage has the player weaving through oppressive cyberpunk cityscapes to a synthy rendition of Tchaikovsky’s Swan Lake, while a later section breezes through rural countryside through stampedes of rogue sheep, to comical accordion accompaniment. In a fun addition, there’s also the option to customise your appearance and skateboard, with various clothes, headphones and paints that can be unlocked with stardust accumulated from each stage.

Even outside the gregarious soundtrack (a portion of which is original, courtesy of Wyclef Jean), the world is gorgeously rendered. Sporting a painted, anime-inspired aesthetic, each stage boasts its own, vibrant personality, while cutscenes play out in an almost slideshow fashion reminiscent of an animated comic. The delightfully feel-good M.I.R.A.I’s Escape mode produces perhaps the best looking stages in the game, in which players help a plucky ASIMO look-alike evade his alien captors on a road of intergalactic sparkle dust. Commendably, it’s also not super demanding, and will likely run without hitches on an average system.

There may be those out there who consider themselves (myself included, as the remains of my Guitar Hero drumkit will attest) a bit of a rhythm-game klutz, but nevertheless enjoy the flow these games relax into after getting to grips with the controls. Despite its unwieldiness, Lost in Harmony communicates that flow more deeply than other, precision-based rhythm games, and watching it undulate beneath the consuming score is the game’s driving force. 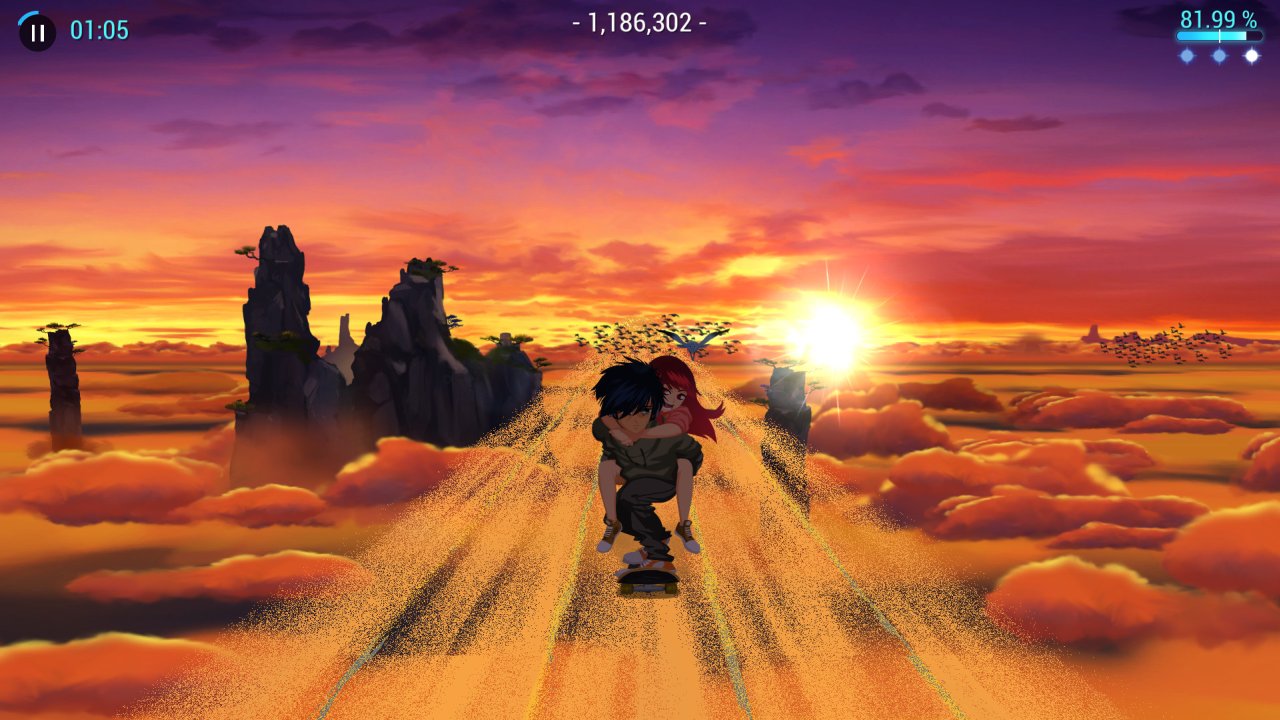 While for some the specifically mapped buttons will prove more comfortable than the more arbitrary flatness of the smartphone, I can’t help feeling Lost in Harmony will always be better suited to the touchscreen. This said, it’s a beguiling experience nonetheless, and atop a refreshingly grounded storyline it has every chance of remaining one of the strongest titles currently on the mobile market, even if its PC counterpart leaves some to be desired.

Our ratings for Lost in Harmony on PC out of 100 (Ratings FAQ)
Presentation
85
Sporting a stylised, anime-inspired look, Harmony’s musical daydreams jive stylishly with its intense score.
Gameplay
70
Though ultimately becoming more about relaxing into the flow of each modernized track, the horizontally-scrolling icons zoom across the screen with such speed it’s challenging to get a handle on the controls.
Single Player
72
Refusing to fall into the less remarkable ‘escape’ patterns of Temple Run and its ilk, Lost in Harmony instead produces a refreshing, yet charming tale of friendship in the face of serious illness.
Multiplayer
NR
None
Performance
(Show PC Specs)
CPU: Intel Core i7-4710HQ
GPU: Nvidia GeForce GTX 860M
RAM: 8GB
OS: Windows 10

75
I'd expected at least a few minor hitches in such a richly coloured game, but for the most part it’s well optimized, and stages run with few if any blips.
Overall
74
If you'd like to experience the sense of flow of iOS rhythm games or runners without the touch controls, Lost in Harmony’s isolated keys and horizontal scroller may prove attractive on the PC. But alas, it’s better suited to the smartphone, and with its rich, painted aesthetic and surprisingly grounded story, it’s probably amongst the strongest on that market. 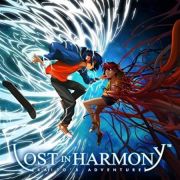 Our Review of Lost in Harmony
74%
Good
The Verdict:
"Initially fiddly rhythm runner becomes a charming friendship story with undeniable style"
Game Ranking
Lost in Harmony is ranked #908 out of 1788 total reviewed games. It is ranked #59 out of 148 games reviewed in 2018.
907. Slime-san
Xbox One
908. Lost in Harmony