Too preoccupied with if they could...

In the '90s, Jurassic Park and video games went hand in hand. There were multiple versions of the first film on basically every platform known to man and that followed suit for the sequel. This was a juggernaut of a media franchise that took the world by storm and made sure you knew about it. Life found a way to bring the dinosaurs back into the forefront of the collective consciousness and I couldn’t have been a happier kid. 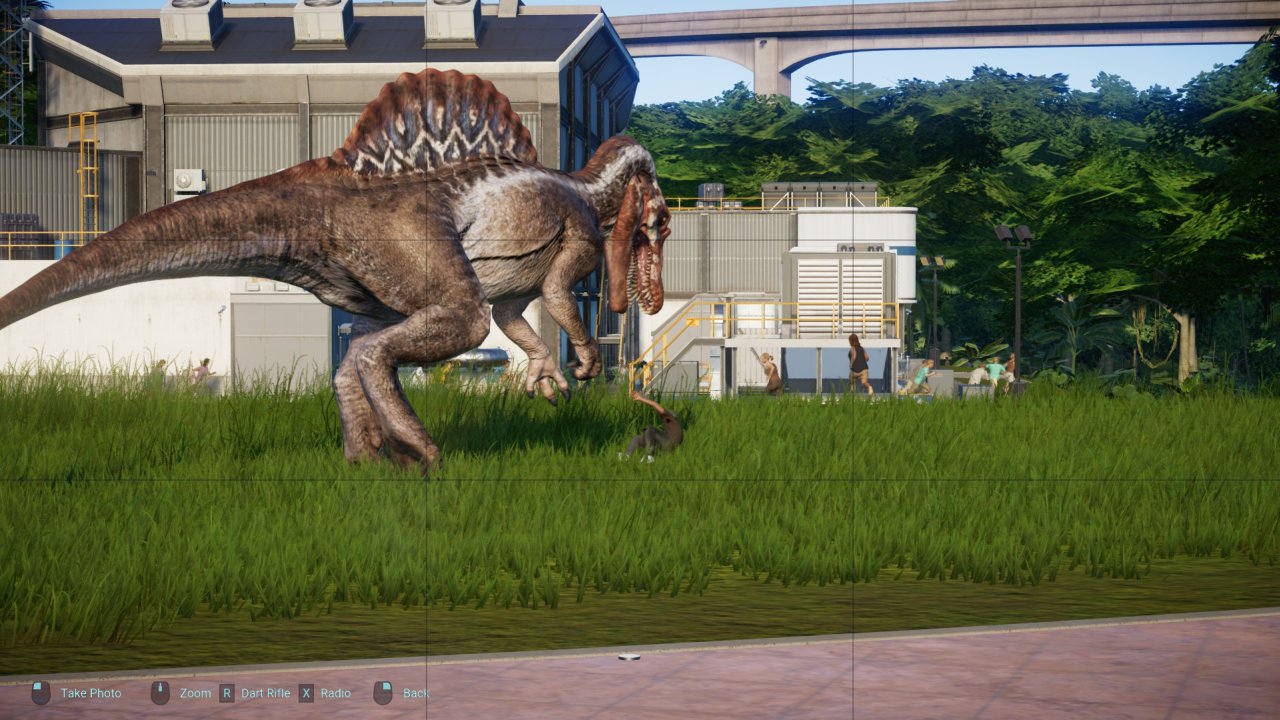 As I grew up, though, I noticed an odd trend. Jurassic Park went quiet and so did the games. It obviously makes sense that a publisher wouldn’t be demanding licensed titles from a dormant film franchise, but you’d figure that better technology would allow for a superior Jurassic Park entry on newer consoles. While you can find a bunch of weird mobile games and slot machines from the last decade, the only real big game to bear the Jurassic Park name was Telltale’s failed experiment in 2011. Well, I suppose Lego Jurassic World, but that was more a Lego title than a dinosaur game.

Now, in the wake of the massive success that was Jurassic World and with a sequel on the way, we’re finally getting the beautiful, realistically detailed Jurassic Park title we always knew could happen. This is similar to that moment from the original film where Dr. Alan Grant finally sees a dinosaur for the first time; there is an awe to the technology that powers Jurassic World Evolution that cannot be understated. At the same time, there really isn’t much else that goes to making this title one worth playing.

Comparisons will, inevitably, be drawn to a similar title from the mid '00s called Jurassic Park: Operation Genesis. It, much like Evolution, was a theme park management game that put you in control of creating your very own dinosaur wonderland. You were given the keys to the kingdom and allowed to explore the genomes of each creature and cater to the needs of your public. It was a decent attempt that replicating the appeal of Jurassic Park, but it fell short due to the limited technology of the time. Evolution falls short mostly because of how rushed the game feels.

Developer Frontier Developments, best known for the recent Planet Coaster, has a knack for creating diverse and engaging theme park simulators, but something is just off about this latest project. Everything starts off well enough, though. You’re given a quick introduction by fan favorite Dr. Ian Malcolm (voiced wonderfully by actor Jeff Goldblum) and told to turn the situation around on five islands that house dinosaurs. From here, you’ll work towards the goal of unlocking the main island from the first film, Isla Nublar, which allows you to create with utter freedom and unlimited resources. 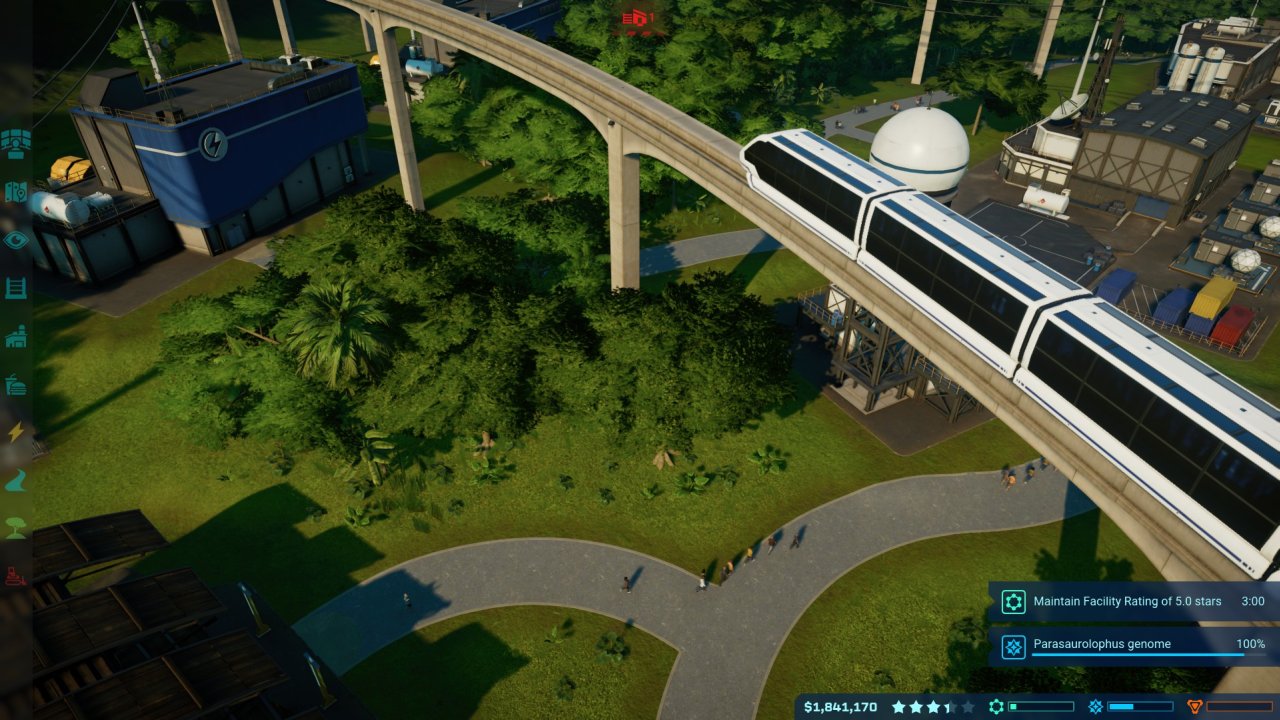 That is certainly a tantalizing goal and I worked tirelessly to get it, but Jurassic Park Evolution never once realizes what it needs to make a solid simulation game. You’ll be placing buildings, constructing pathways, researching dinosaurs and even completing missions, but if you thought for a second that your guests would be chiming in to give you hints, then hold on to your butts. The guests basically exist to fork over money and nothing else. They don’t even have cute little animations like taking out umbrellas when storms happen. For that matter, there isn’t a single child in the game. A dinosaur theme park simulator with no children is just plain illogical.

The missions you’ll undertake will come from one of three divisions; Security, Entertainment or Science. You’ll need to raise your rating with each division by doing contracts for them. When raising your rating in one category, the others will go down, so you’ll need to perform a balancing act to stop the other divisions from sabotaging your park. You can probably already see how this doesn’t make sense, but I’ll spell it out with a fairly common example.

In one of my parks, I was trying to build up my science reputation to unlock an upgrade for a building. The security manager was berating me for having an unsafe park and told me to focus on him a bit more. A few minutes later, he then sabotaged the gates that kept my dinosaurs in their pens, unleashing them upon the park and killing a bunch of people. Clearly he didn’t care about the safety of my park, he just wanted some attention from me.

While my park's rating initially took a hit, about three minutes after clearing up the issue, everything was back to normal. The guests didn’t care that their loved ones had been slaughtered mere minutes prior, because I just unleashed a T-rex into a pen and everyone was eager to see him. To them, it was time to fork over cash in my restaurants and bowling alleys while forgetting that their husband is no longer a part of this mortal coil. I even built a new gyrosphere station that will let them get up close and personal with the creature. They never really liked their family, anyway. 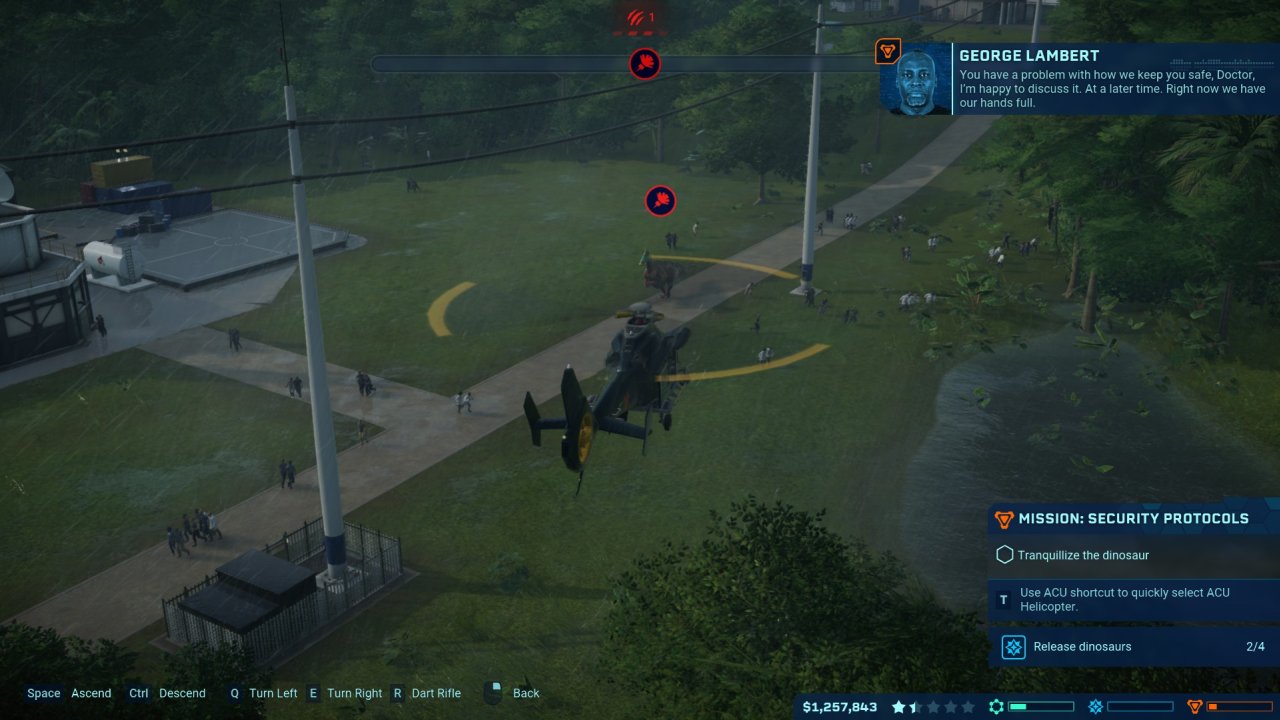 It’s just a baffling mess of systems that don’t coalesce with each other in any meaningful way. It doesn’t help that it took me roughly 19 hours to figure out how to actually unlock things in the game. The tutorials that do exist in Jurassic World Evolution are so threadbare that I somehow made it to the final island without completing any of the missions. I didn’t realize how the meters worked for each division or that you could manually request contracts from them to speed up the process. For that matter, I didn’t even know you could scroll around on the expedition screen. I could have had Velociraptors within a scant few hours, but I figured the map would zoom out on its own.

Even knowing those few things, releasing dinosaurs at random will get you nowhere. There is this whole system of statistics that governs whether a dinosaur will get along with other species, but the game doesn’t bother to inform you to look at those stats. To make matters worse, you won’t know what those stats are until you hatch them and manually check out the different meters. I had just assumed carnivores and herbivores couldn’t mix, but there is a bit of tweaking you can do in the game world to ensure they stay happy in their pens.

Even figuring that all out, unlocking Isla Nublar and getting to that sandbox mode takes so much dedication and so much trial and error that it just doesn’t feel worth the hassle. Even when you unlock it, which can happen as early as the first island in the campaign, you’ll still need to play through the other islands to get the proper research tools to get every dinosaur in-game. I suppose you’ll also want better fences or different guest buildings, as well, but you can’t just get those from basic research. Jurassic World Evolution gates off all of its content behind this convoluted story mode that mostly sees you sitting around and waiting for money to accrue before you plop in a bunch of dinosaurs and wait some more.

When you do release the dinos, at least the game looks fantastic. The graphics are truly exceptional and I absolutely felt the same way I did when I first saw Jurassic Park when I was six years old. This game makes me really appreciate how far this industry has come, and how even just pretty graphics will never be able to make up for a lackluster game. It doesn’t help that once you’re done staring at the majesty of each beast, you’ll watch as your park guests phase through doors or your park rangers will drive through trees. I guess you can’t succeed at everything. 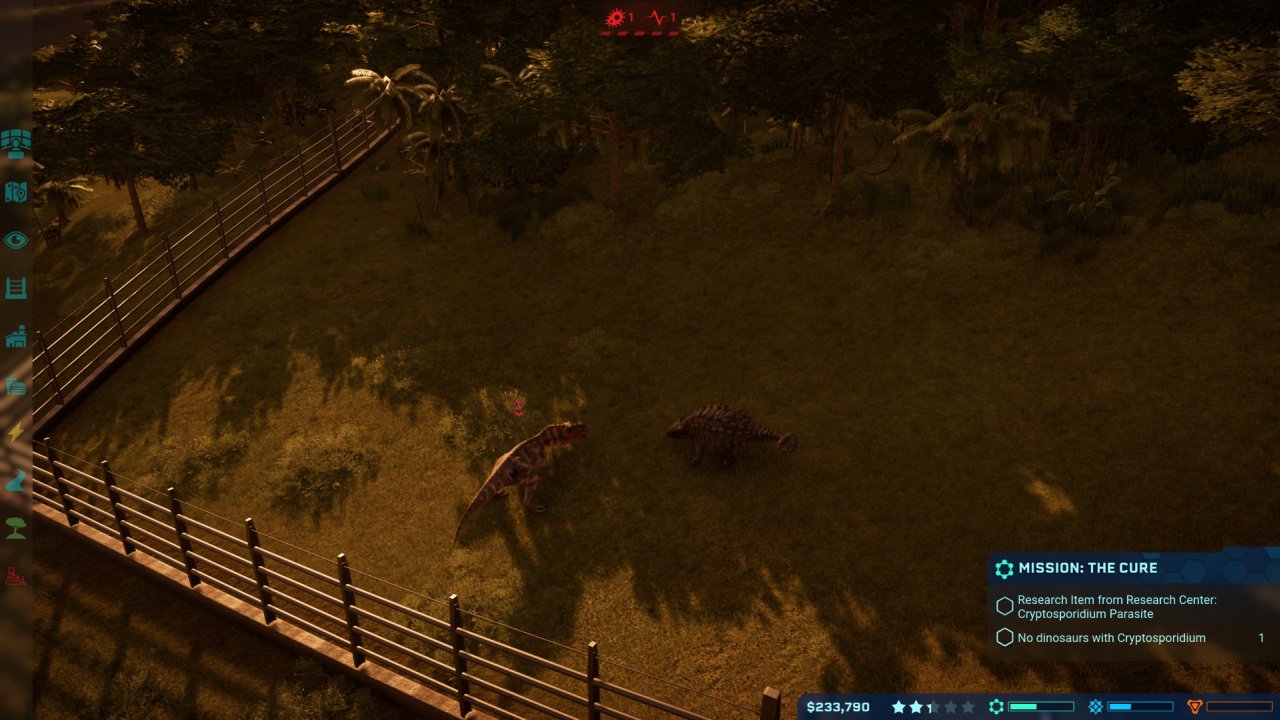 There is a tremendous amount of potential in Jurassic World Evolution. All of the foundation is there to make a great theme park sim that also happens to have dinosaurs, but you can definitely feel that this was rushed to make the release of Jurassic World: Fallen Kingdom. Without those time constraints, maybe there could have been elements of cleanliness to contend with, or possibly actual AI for your dinosaurs.

Hell, why can’t I inhabit a park guest and walk around my own creation? Why does it take me more than an entire day to unlock all of the tools to realize my park? Why are some of the dinosaurs just reskinned variants of each other? There is so much more that could have been done and it pains me to see the game succumb to mediocrity.

That is, sadly, the reality we’ve gotten. We’re just going to have to go back to waiting for that glorious next-gen Jurassic Park game. Evolution can be fun and will temporarily engage you, but it never feels like enough and will certainly be a game you quickly forget once you’ve seen it all. That is, if you have the willpower to actually see it all.

Our ratings for Jurassic World Evolution on PC out of 100 (Ratings FAQ)
Presentation
75
Jurassic World Evolution gets a lot right with its dinosaur models and environmental details, but falls short with park guests and buildings.
Gameplay
50
Part sim and part time killer, the gameplay of Evolution never really comes together and is mostly a hodgepodge of half realized ideas with similar execution.
Single Player
40
With no online connectivity in sight, you’ll be playing Evolution for eons to unlock everything. The campaign is lengthy, but it certainly isn’t interesting or diverse.
Multiplayer
NR
None
Performance
(Show PC Specs)
CPU: Intel Core i7-3770
GPU: Nvidia GTX 1060 6GB
RAM: 16GB DDR3
OS: Windows 10 Home

80
With how detailed the dino models are, Evolution runs surprisingly well. I barely saw any framerate dips and I had the game maxed out on all fronts. That being said, it can drop during heavy rain storms and there is some stuttering while flying over your island.
Overall
50
Jurassic World Evolution is a very pretty looking game, but one that doesn't have a lot going on under the hood. It can be infuriating, engaging and baffling in equal measure, but is only really made for the most diehard of Jurassic Park fans. 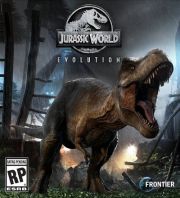 1723. Planet of the Eyes
Xbox One
Related Games