TOWARDS THE PANTHEON
Platform: PC
70
SummaryNewsArticlesVideoScreens

Towards The Pantheon Review

This turn-based RPG finds its strengths in conventionality

A malevolent organisation. One powerful warrior. Four lands racked with division. And many, many anthropomorphic cats.

Though the sunny palette and cast of lovable oddballs remind pleasantly of the monumental Undertale, Towards the Pantheon diverges little from the RPG format, and more specifically that of the turn-based oriented JRPG. However, it’s also a game thoroughly aware of its conventionality, and as such uses familiar technical systems to provide a predictable, yet nevertheless endearing fantasy quest. 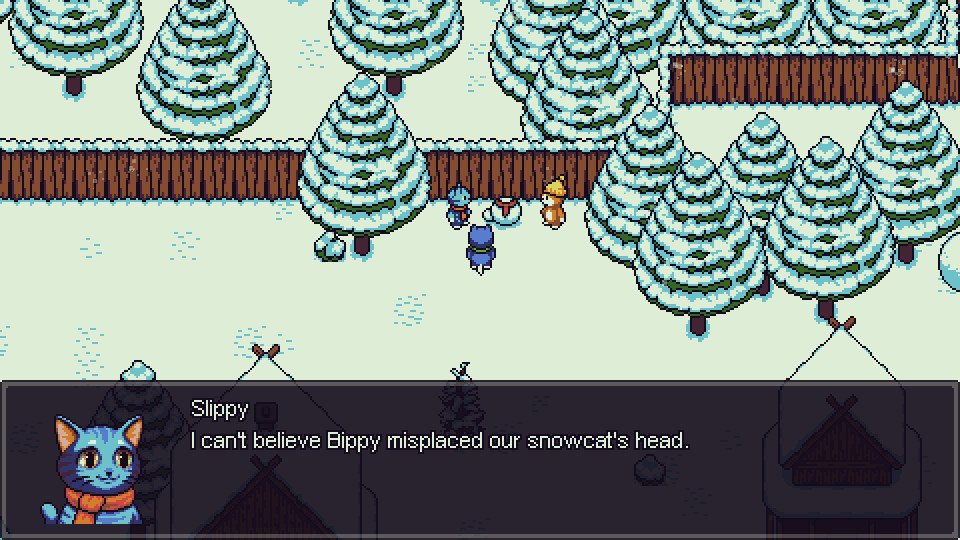 The debut of Connor O.R.T Linning, Towards the Pantheon is a tale of friendship and endurance against a wicked, power hungry darkness. Through the opening cutscenes, we learn that the world has been threatened by a group known as ‘The Sworn Light’, who use divide and conquer tactics to gain world power. As the four factions of the land lapse into animosity, it falls to village chief, Wuotan, to summon his best fighter to stop The Sworn Light’s reign of terror.

That’s where you come in. Nominated by your village Grandpappy, you’re thrust into the medieval-style boots of Freyja, who must journey across four enemy-packed lands to confront The Sworn Light at the revered ‘Pantheon’.

This being a JRPG n’ all, you won’t be going alone. After befriending reluctant scholar, Bam (who - in a vague hark back to Chrono Trigger’s frog companion - happens to be a cat) you gain the ability to switch between playable characters, and as your party increases you’ll be able to use your friends’ peculiar talents to aid different parts of your quest.

The world surrounding the Pantheon evokes the quaint, whimsical tone present in SNES classics such as Secret of Mana, but looks closer in visual design to more simply-drawn revamps that have exploded within recent years. The feline town of ‘Cathalla’ wouldn’t look out of place in Undertale, with its quaint Winterland of frosted evergreens and frozen cat sculptures. Equally, though Pantheon’s enemy design is simple, The Sworn Light’s monsterly minions mix the vaguely comic instincts of Chrono Trigger with the more traditional fantasy underpinning Child of Light’s whimsical bestiary.

Despite its surface resemblance to Undertale, Towards the Pantheon doesn’t attempt to alter or extend the JRPG format, instead allowing its storyline and oddball characters to be driven according to the themes and tropes of the genre. You begin with a certain amount of health points (or HP), and stamina points (SP), which dictate the way you interact with the game’s turn-based combat system. While Freyja’s axe, for example, delivers the largest amount of damage, it’ll chomp a significant portion of her stamina, and once you’ve exhausted yourself, you’ll need to wait a few turns for it to regenerate, or refuel with one of many items sold by merchants across each town. After each battle, you gain experience points, which are crucial for levelling up and expanding your maximum HP and SP. 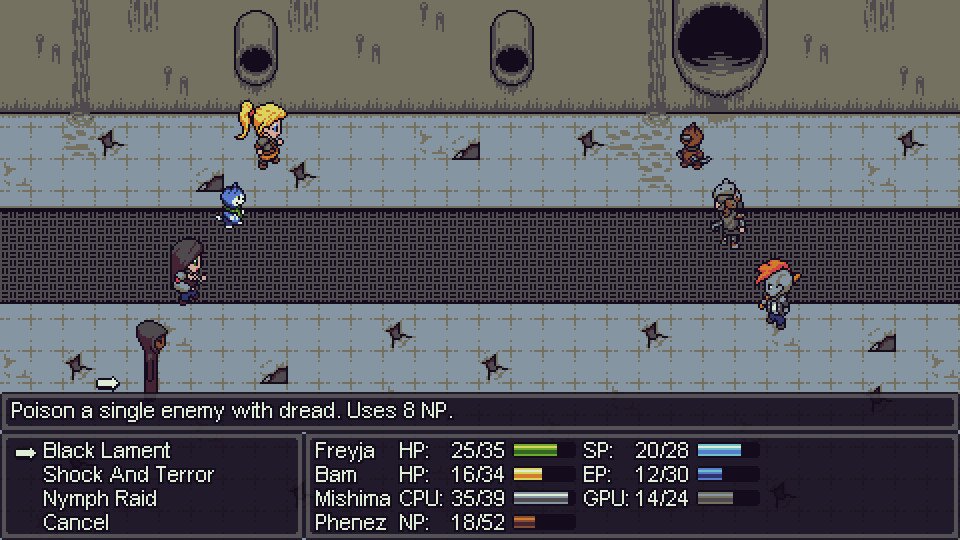 If things are sounding typical so far, it’s worth noting that grinding here is considerably less time-consuming in comparison to some JRPG’s, making this an apt choice for players who’d prefer a story that isn’t drawn out by long periods of enemy-bashing.

Random encounters are also present, but operate closer to Earthbound than Pokémon or Undertale, since they appear visibly on the map in the form of ‘battle icons’. Though Towards the Pantheon makes it clear the audience it’s going for, I tend to argue in support of optional encounters, as they supply fans of classic, turn-based systems with a serviceable way of levelling, without slowing the narrative progression for those who’d prefer to experience the main quest. This said, bosses are compulsory, and since they’re heftier than regular enemies, it’s probably wise to grind a little before running full pelt at an elemental giant.

Even if not, having a good brawl now and again is wise to take the meniality of what is otherwise wandering around the game world in search of your next lead. Though each faction carries its own, amusing personality, some may find the charm quickly evaporating under the backwarding and forwarding between familiar areas. Admittedly, this is something Linning appears to have recognised by including something of a fast travel system. In the form of a rideable hamster cutscene, no less.

I do wish these travelling segments were playable (just saying the words ‘hamster mount’ feels a solid enough hook) but they are as incurably grin-inducing as they are convenient for lapsing long periods of wandering.

There is the lightest touch of puzzle-solving involved: most often simple push-block challenges or some old reliable lever-pulling. Though essential for keeping the downtime between battles interesting, these sections can be unnecessarily drawn-out; when pushing a block, the character slows considerably, making simple environmental tasks feel menial and tiresome. 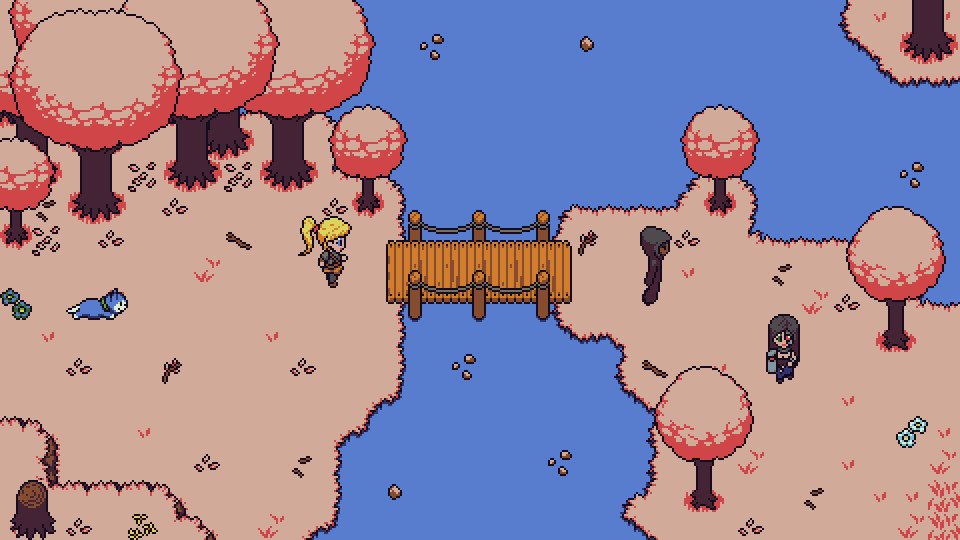 Very occasionally, they can read as obtuse. There was a moment in which I was required to place a hexagonal crank handle into the corresponding slot. Upon finding a hexagonal hole, however, the lever remained stagnant. After a brief bit of wandering around pondering what I needed to do to the lever before it could fit, I found my puzzle conveniently solved by placing the lever into a different, but identically-described slot. Though, this seems more a minor inconsistency with the level design than anything game-breaking (and possibly a fair bit of my own naivety is to blame), and thankfully those instances were uncommon.

Towards the Pantheon remains very much on the RPG rails from start to finish. Of course, you only need glance at the additions the genre has seen recently to know that’s not necessarily a problem. Between the successes of The Banner Saga, Darkest Dungeon and the eminent Pokémon franchise (and that’s not even scratching the surface), it seems Linning is aware of the current strength coursing through the turn-based RPG, and plays well to its tropes in an endearing tale of unity against vaulting odds. Though not too surprising, it acknowledges its audience both early on and well, and is comfortingly content in giving you exactly what you came for.

Our ratings for Towards The Pantheon on PC out of 100 (Ratings FAQ)
Presentation
75
Closer to the colourful, simply-drawn world of Undertale than the more detailed Secret of Mana, the four factions lining your journey to the Pantheon blend the comical tone of Chrono Trigger with the traditional fantasy designs seen in Child of Light.
Gameplay
72
Towards the Pantheon carries many traits of the JRPG - a turn-based combat, extendable party and a considerable amount of wandering between quests. Though rigorous enough to support a charming narrative, world exploration can become fatiguing, and simple block puzzles unnecessarily snail paced.
Single Player
70
Though not as smartly written as Undertale, or its earlier SNES influencers, Towards the Pantheon is nevertheless endearing, with its anthropomorphic side-characters and focus on friendship and unity.
Multiplayer
NR
None
Performance
(Show PC Specs)
CPU: Intel Core i7-4710HQ
GPU: Nvidia GeForce GTX 860M
RAM: 8GB
OS: Windows 10

76
By no means a demanding game, Towards the Pantheon plays flawlessly from start to finish, though some of the theme tune accompanying specific areas can make portions of Freyja’s quest more distressing than they should be.
Overall
70
Well written, quaintly designed and only occasionally fatiguing, Towards the Pantheon fully embraces RPG convention, using the genre's familiar narrative themes and battle systems to provide an unavoidably charming fantasy quest.