You know you might be in for an expansive experience when a demo requires a 15 minute presentation to show how to get the most out of the hands-on time to follow. This was precisely the case with the latest installment in the Dragon Quest series, Dragon Quest XI: Echoes of an Elusive Age. The game was released in Japan in mid-2017 on the two most popular Japanese platforms at the time; the 3DS and PS4. Fast forward over a year later, after an extensive amount of voiceover dubbed with English voice actors and other tweaks, and the game is finally set to release in the West later this year. This version of the game will sport a few extra features and enhancements, including a hard mode, slicker visuals, some ironed-out mechanics, a dash feature during travel, and a more streamlined system of navigation. 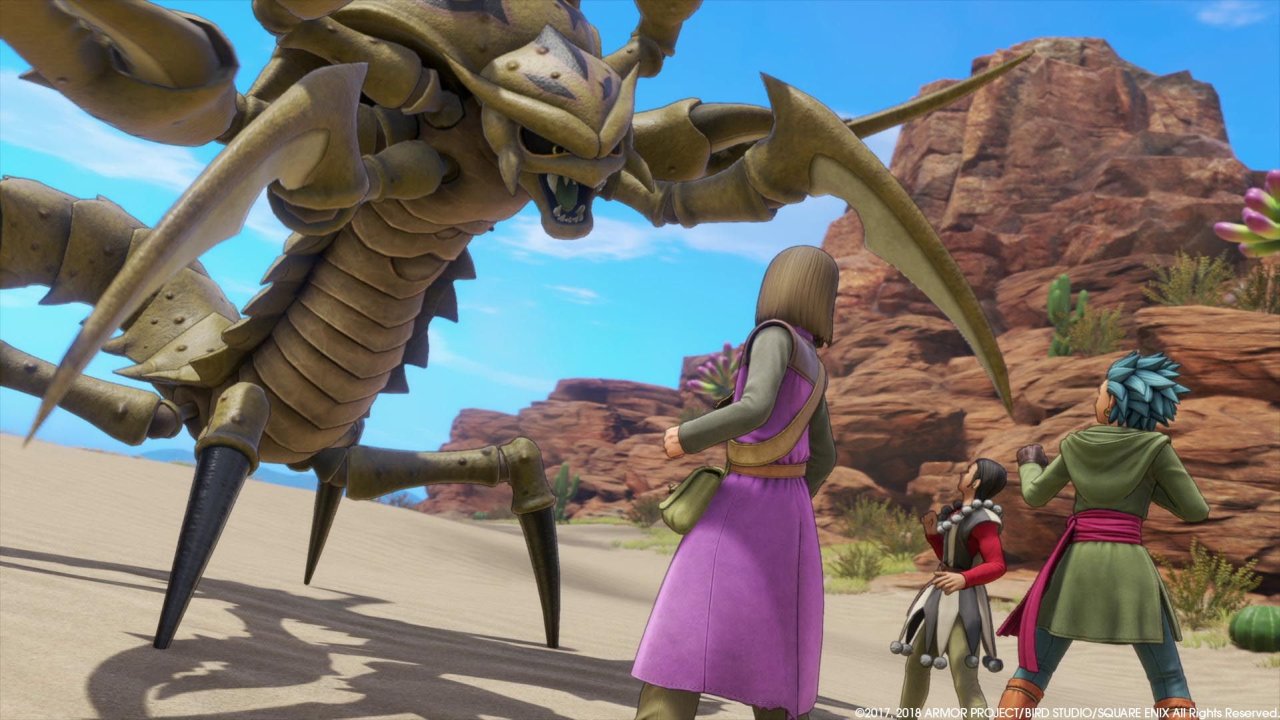 Apparently, just plowing through the main story is said to take around 50 hours, while taking care of all of the side quests will run that up near the 100 hour mark. We were given the choice to jump into one of two pre-saved points in the game to get a taste of this adventure. One was in the early part of the game as our hero sets out from their home village, the other was a later point in a desert location near a bustling capital, where we’ve already assembled a party of 4 heroes (including a non-controllable “guest” member). I opted for the more interesting looking desert section. Obviously, a massive open world title like this isn’t going to translate particularly well into a 20 minute gameplay demo. Though, at least during my bite-sized adventure inside the fantasy world of Lotozetasia, I got the sense that we should be in for an enriching, enjoyable JRPG.

While my experience with Dragon Quest games has gone through a lengthy hiatus, I’ve spent many a night venturing out and grinding away during the early days of the series on the NES and Super NES, and only dabbling in some of the PlayStation and DS entries. My time playing DQ XI provided plenty of warm and fluffy nostalgic moments, especially when clashing with monsters like the familiar Wyverns and Slimes, including the annoying evasive Metal Slimes. As pretty and large in scope as everything seemed, this still very much seemed to follow the standard Dragon Quest formula.

At the same time, the game looked and felt like a modern and elaborate rendition of DQ; embracing that colorful JRPG cel-shaded charm while opening things up to adhere a bit more to Western RPG sensibilities. The game runs on Unreal Engine 4, though you wouldn’t quite know it at first glance with its cartoony disposition. I was dropped into a vast desert landscape, lined with massive mountains and boulders, grasslands, shrubbery, and crawling with a colorful assortment of baddies. Luckily, I was able to ride on horseback, Zelda-style, to cover as much ground as I could in the limited time I was given. Since we had been shown the ability to plow through monsters on our galloping horse like a Rohirrim march through stampeding orcs, I of course had to play with this feature right off the bat. 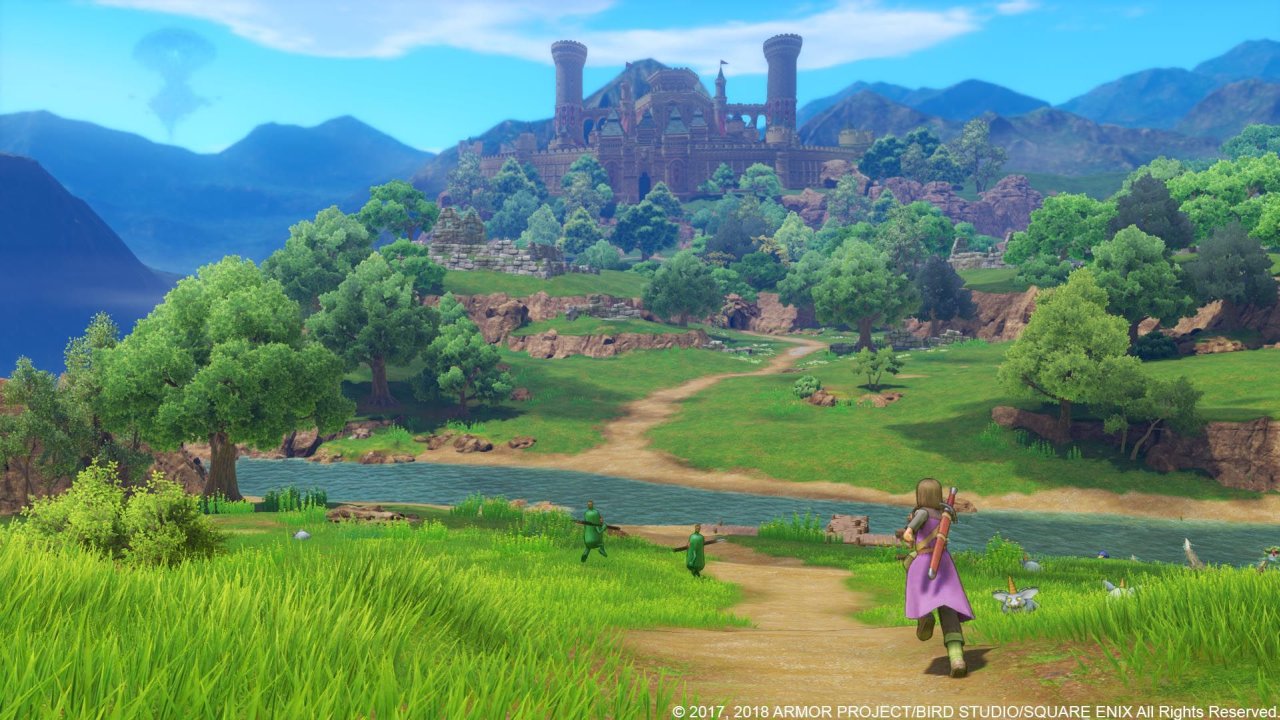 Next up on my agenda was to engage in an actual battle, so I parted ways with the mount and found the nearest foe, a waddling Furby-looking creature wielding a large mallet. I quickly noticed that despite the modern-day glitz of the visuals and open-world emphasis, the battle system retains the oldschool, turn-based approach. This doesn't necessarily mean the gameplay was passive or the strategy element overly simplistic. While you can of course just spam basic attacks and bust out healing when needed, the game implements a system of light tactics to maximize your potential in battle. You can command the system to prioritize various actions and strategies depending on the situation.

For instance, you could choose to take more of a survivalist approach by focusing on healing, conserve your MP, or “fight smart.” You can also bust out various elemental spells based on class, with a range of strengths, weaknesses, and effects. After a few fights with an array of cartoony creatures like the amusing “Cactusball”, I noticed both a walled-off city, and a campfire oasis containing a religious looking statue in the distance. Although the city was tempting, I decided to head towards the campfire, as it seemed the more promising spot to progress more quickly. I’m told you could take part in a horse race in the city, though I had had my fill of horseback riding with my monster trampling at that point anyway. There is supposedly a number of other mini games to help break the monotony that usually comes with the turn-based battle grinding.

Upon arriving at the campsite, I met a mysterious local dressed in jester-meets-Medieval garb, Sylvando. He was curious as to our company’s purpose, while being peculiarly guarded about his own background. This segment of dialogue seemed to serve as a way to flesh out the characters, providing a small plot point to unveil a bit of the story. We get brief mentions of wanting to discover mysteries behind the “Luminary” and stopping “The Dark One.” We then set camp for the night, and paid a visit to the shrine statue next to it. This brought up a menu with a handful of options, including the ability to save our game. I also noticed a bell sitting next to our site, where we could quickly summon our horse. 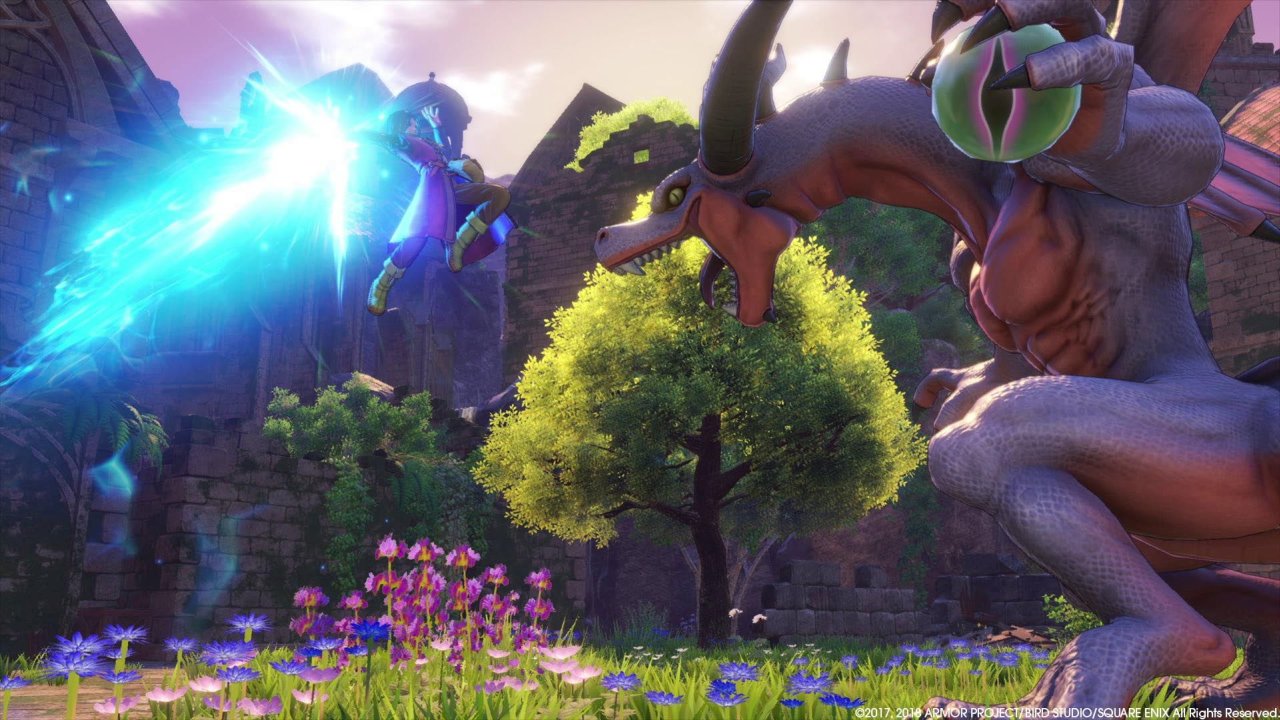 Making my way through a cavernous underbelly of a large rock formation, I ventured further into the wilderness and eventually came across a massive scorpion-like creature, who I assume acts as a sort of mini boss. This fight took a bit more effort and strategizing outside of merely spamming attacks, and while a couple members’ HP dwindled dangerously close to empty, I ultimately defeated the beast. I only had a bit of time to bask in my hard-fought victory as my time with the demo swiftly came to an end shortly thereafter. It was a bummer as I felt the game was just starting to draw me in, and there were plenty of areas left unexplored.

From what I gathered, Dragon Quest XI looks like a nice blend of nostalgia and modern grandiosity. It should serve to satisfy the old guard of JPRG fans with its depth of customization and traditional turn-based battle system. At the same time, there seems to be enough of a user-friendly UI and intuitive gameplay, decorated with some pretty visuals, to draw in newcomers.

The game is set to be released on the PS4 and PC this September. The game is also coming to Nintendo Switch, but there is no word of yet on when that version will hit. 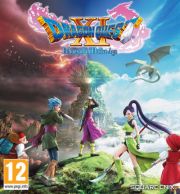