Over the past 10 years, CD Projekt RED have managed to achieve growth that many companies only dream of, in the games industry or any other. What started out as a scrappy Polish studio with their first game, The Witcher, they have since grown to exponential heights. The sequels, The Witcher 2 and 3 continued to show the rising level of expertise within the studio, while at the same time becoming one of the most well-known developers out there among both fans and critics. So it was no surprise that their next game, Cyberpunk 2077, generated a lot of excitement when it was first teased back in May 2012. However, since then the title has been largely dormant, until finally at E3 2018 the company gave everyone the first proper look at the game. We had a chance to see a hands-off demo of the game at the show. 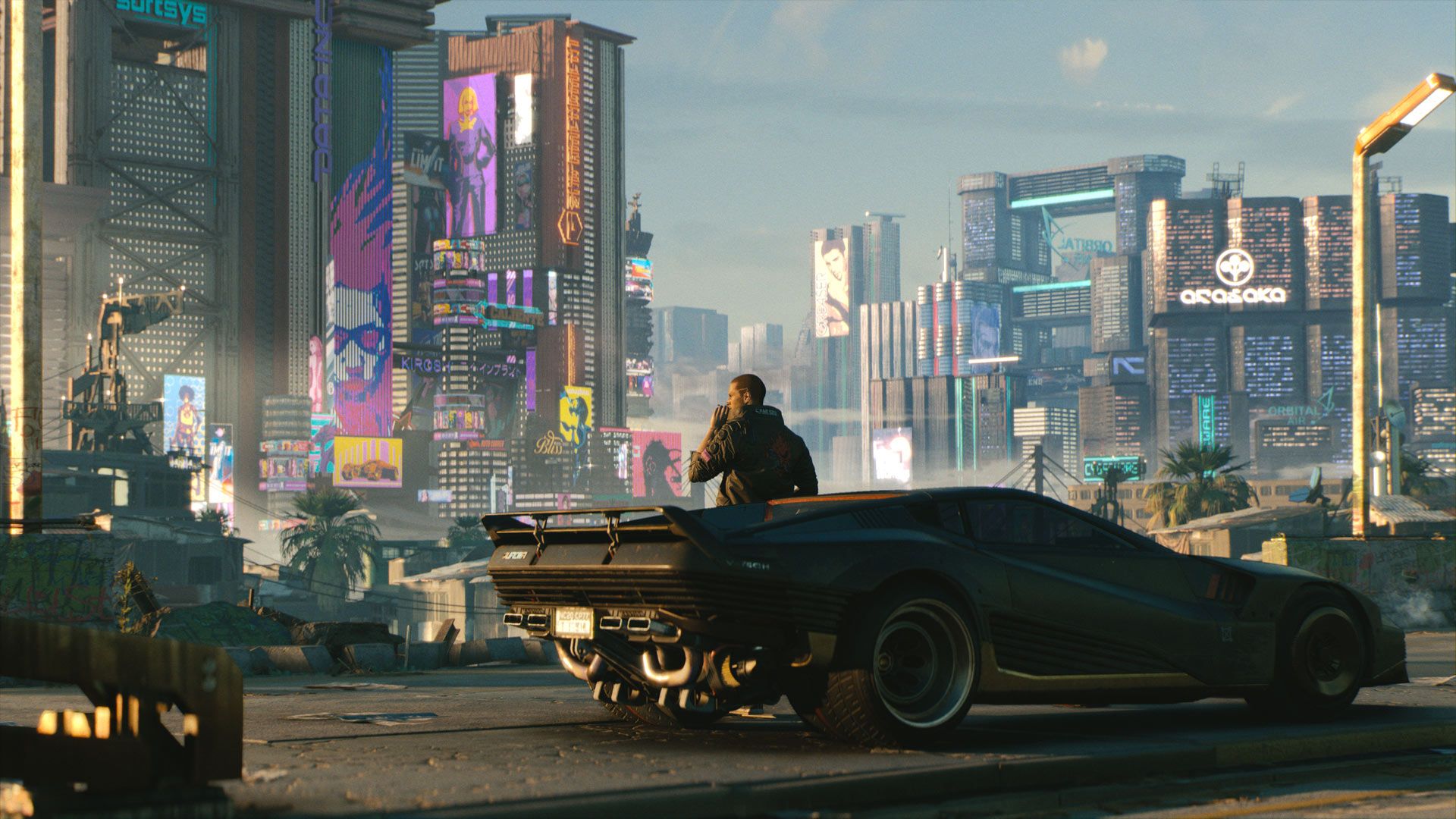 The live demo was narrated by Peter Gelencser, level design coordinator at the studio, and played by the lead of the QA team. Cyberpunk 2077 takes place in the future, and America is in pieces. Organized crime syndicates run the streets of Night City, a metropolis in California, where the game takes place. Players assume the role of V, a "skilled urban merc" as the developers describe them, who wants to retain control over who they are even as the rest of the world crumbles. The game will begin with a character creation tool, so V can be either male or female. You'll also get a chance to allocate early stats (such as a Cool factor, alongside Tech, Strength, and others), pick your background story, and of course alter visual features like hair, tattoos, eyes and face. The game will reportedly have no class system, so players can adjust their character's progression as they see fit.

With the newly created V ready to go, the demo began, and it's confirmed that the game will be using a first person perspective. We found our character was on a mission to rescue a missing person. They were tracked down to an apartment full of Scavengers – a group of people that capture others and strip them for parts (cyber enhanced body components). Along with a partner Jackie Welles, we worked our way through the apartment, which was covered in tech, bodies, and blood. Going over to a few of the corpses, we scanned them but none were the target. Soon enough, enemies emerged from deeper within the large apartment and we engaged in a shootout. Using a pistol, V was able to take cover and pop out to take shots at enemies. As we did so, damage numbers appeared with each hit. The action looked intense, but the shooting itself didn't feel like it carried much weight and was definitely leaning more towards RPG-style shooting like in Fallout, than a true FPS. V could also use a Reflex Booster skill to slow down time and take some well placed shots.

Eventually we can across a large enemy barricaded in a room. His large caliber machine gun was tearing right through the wall, showcasing some environment destruction. We had to flank around and take him out from an exposed vent connected to the next room. With the area clear, we found our victim, who was not responsive but still alive. An implant had been removed from her, preventing her from calling for help. We carried her out of the apartment and into the hands of a trauma team, who are an expensive service that specializes in rescue, and asks no questions. We handed the target off to them, and the mission was concluded. 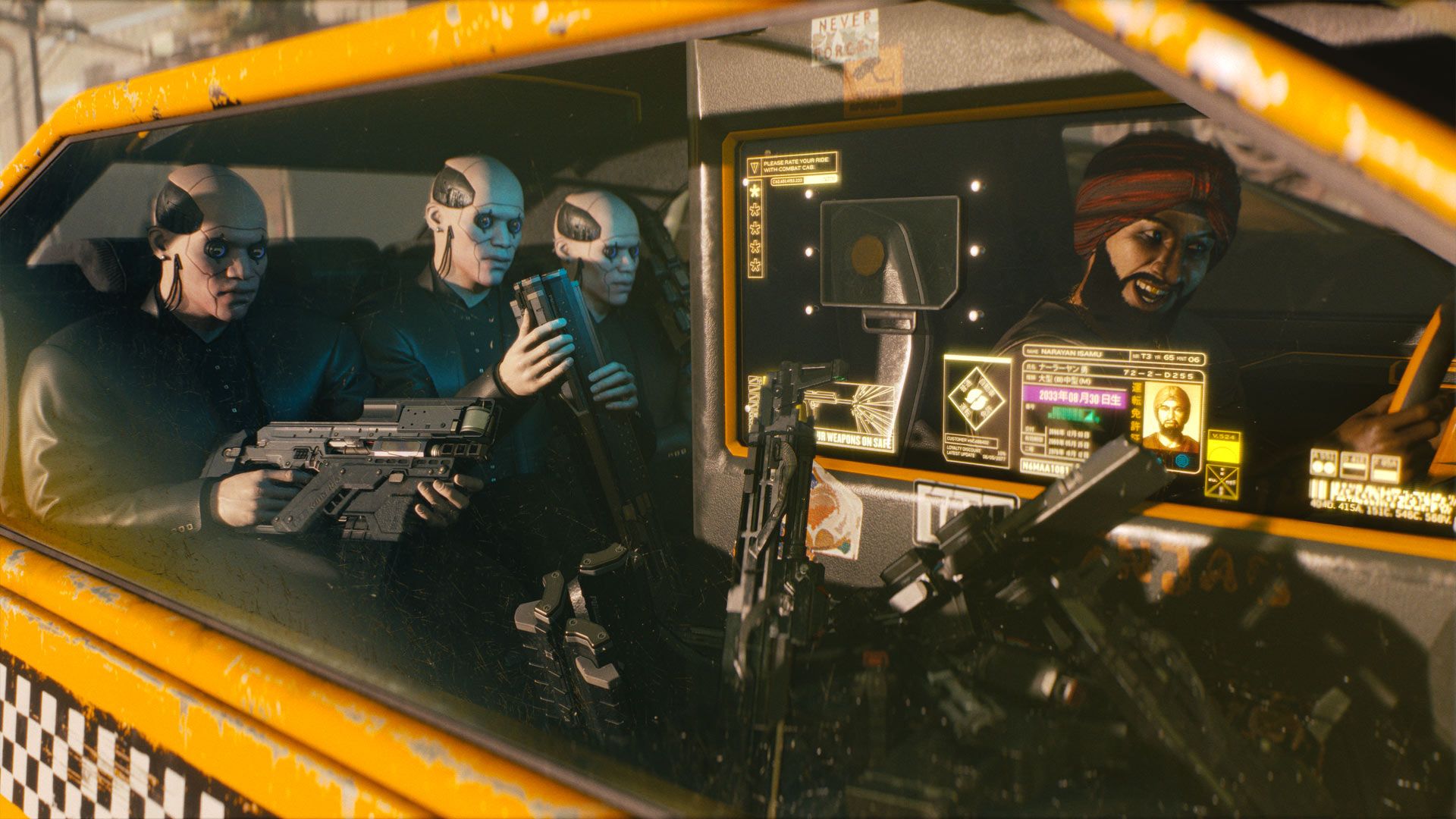 The demo resumed three days later. In her apartment, V could be seen in bed in the morning, with a naked man scurrying off after a supposed one night stand. The demo host emphasized that this is a "mature" game, however this example, alongside with the fact that the female rescue victim from the previous mission was completely naked, hardly seem like clever examples. We get a call from Jackie that there's an opportunity to meet a local crime boss, Dexter DeShawn, for an assignment. We get dressed and head out. The developers say that the game will not have loading screens apart from the initial one. We watched as V walked through her futuristic high-rise building and got into an elevator, and took it to the ground floor. We observed the world from above – it was full of billboards, tech, flying cars, and cybernetically enhanced citizens roaming the street. It was the sort of view you'd find in Deus Ex, though much more vivid and colorful. The city is said to have 6 districts, a day and night cycle, and plenty to discover.

After crossing the street at a green light (for full immersion), we got to Dexter's limo, who ordered us to get in. Notably, this was a choice, so as in any good RPG there was an opportunity to refuse. But we went along, and met the man face to face. He tasked us with getting a military-grade device from Maelstrom, a group of crazed people who are obsessed with getting implants for themselves. Of course, the device would not come freely, but Dexter refused to give V the money for it, asking us to "figure it out". Reluctantly, we agreed (though again there was a choice), and got dropped off in a different part of the city. Before taking on this mission, we decided to visit the conveniently close office of a Ripperdoc, Victor. This man allowed us to purchase new body upgrades, and installed them. We got a palm enhancement for better weapon handling, as well as a new eye that let V zoom in and scan items. The upgrade process was fairly detailed as we watched the new parts get installed, the view was from the new eye getting inserted. The QA lead also let the audience verify that was in fact a live demo, by asking the audience what to zoom in on. We left Victor's office, with the developers mentioning that he was one of the more legitimate docs – there will be others, who are more off the grid, and have military-grade components.

Jackie was waiting nearby, so we met up and got into his car. There will be drivable vehicles in the game, though from our demo things looked fairly scripted as the car remained on the road and few other vehicles were around. Suddenly, we were engaged in a driving shootout with the Scavengers, and had to keep the car steady (which can be driven in third person perspective) while Jackie took shots at the enemies in the van. The foes were eventually dealt with, and we arrived at a secret meeting for Militech International Armaments, one of the corporations that runs the city. We scouted out the area and noted that these guys were too high level to engage, so we told Jackie to keep it cool. As V headed down to the meeting, she was grabbed and interrogated – the enemies jacked into her personal link to perform a sort of lie detector test on the spot. We had to tell a woman, the leader of this group, about Dexter's mission. She had a plan of her own – she wanted us to use a special money chip to conduct the transaction, and it had enough money to buy the device from the Maelstrom. We agreed (again, as a choice). From there, we decided to drive to the warehouse where the group resided – again, developers noted there were other options, like keeping the money for ourselves. 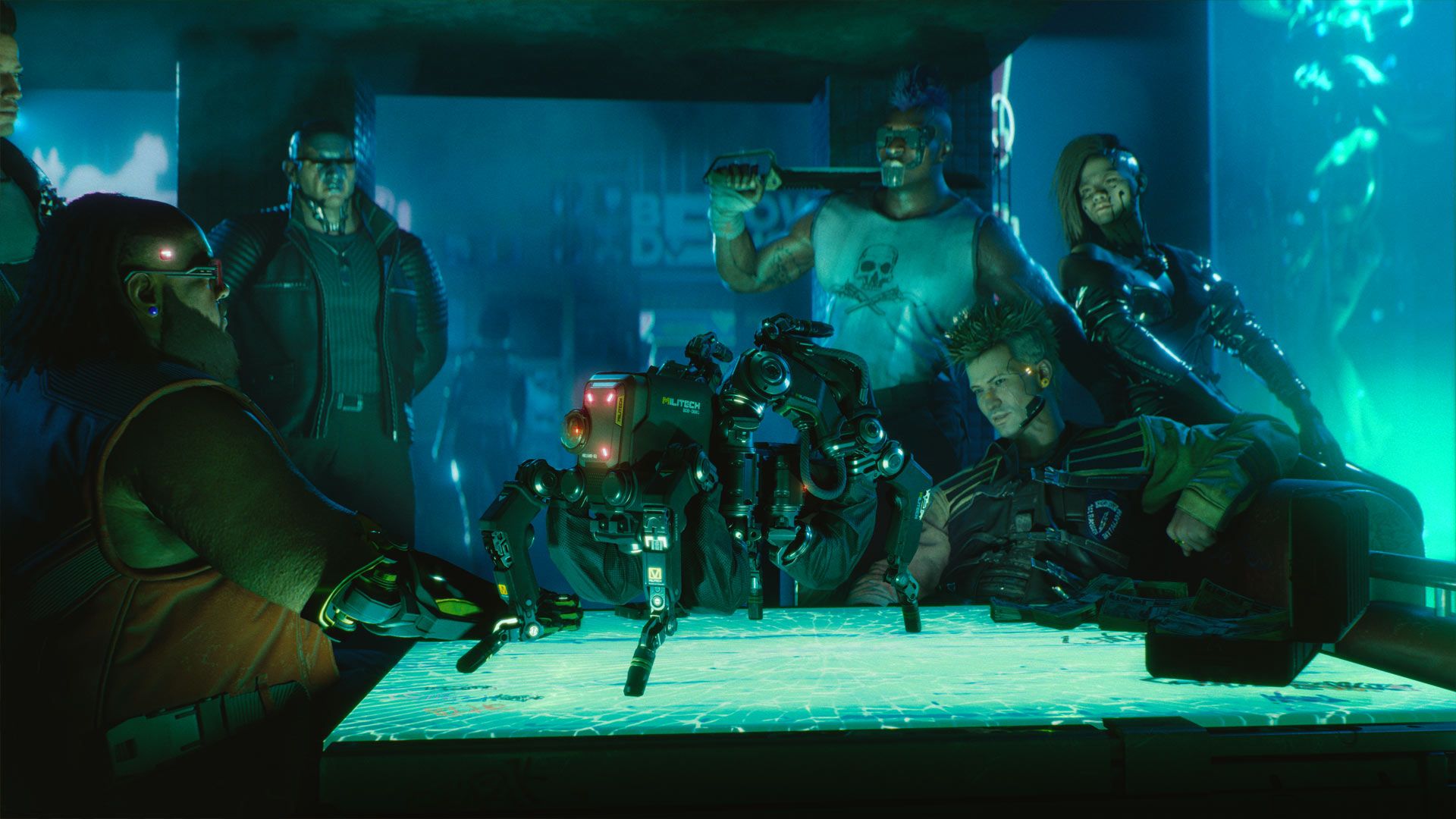 We arrived at a manufacturing plant that served as the base of the Maelstrom group, and walked through the main entrance; we told the guards we had business to conduct, and they let us in. Meeting the grotesquely disfigured members of the group, they were interested in selling us the device – turns out, it was a military spider-robot that could be remotely controlled once you connected to it. The sale was interrupted by a leader of the group, who didn't want to do any business with us, leading to high tension in the room. However, we kept our cool and told Jackie to do the same, though there was an option to shoot.

We gave the money chip to the leader, who inserted it into their hub – but it turned out to be a decoy. The security systems melted down, and in the commotion V and Jackie cleared the room with some quick shooting. With the robot in hand, we had to make it out of the facility. We got to observe some more combat gameplay – such as a powerful shotgun that could damage through cover with a charged-up shot, and a rifle that was able to lock-on to enemies and then send all bullets their way, akin to the Smart Pistol in Titanfall. Another cool weapon had the ability to ricochet shots – an arc would be displayed, showing where the bullets would bounce off to, and that enabled us to shoot enemies behind cover. The enemies themselves seemed to use standard weapons, though they had expanded movement options like high jumping onto catwalks. Further into the factory, we snuck up on an unaware enemy and jacked into his link – this allowed us access to the enemy's network, where we took control of their weapons. At the next pair of enemies we encountered, V remotely jammed the weapon of one foe, and then performed a devastating melee attack from above on his friend, using her blade arms.

After showcasing some wallrunning, we encountered two foes using exoskeleton suits. These tougher shield-wielding foes took all our extended arsenal, as well as Reflect Boosters in order to slow down time as we slid under the enemy and placed well aimed shots at their weak points. With the area clear, we finally made it out, where a Militech convoy was ready to pick up the pieces. We argued with the woman about setting us up, but had to admit that this is the sort of world Cyberpunk is going for, where you can't really trust anyone. As a reward for helping Militech, they let us keep the spider-robot, who we again could choose to return or not to Dexter. With that, our demo concluded. 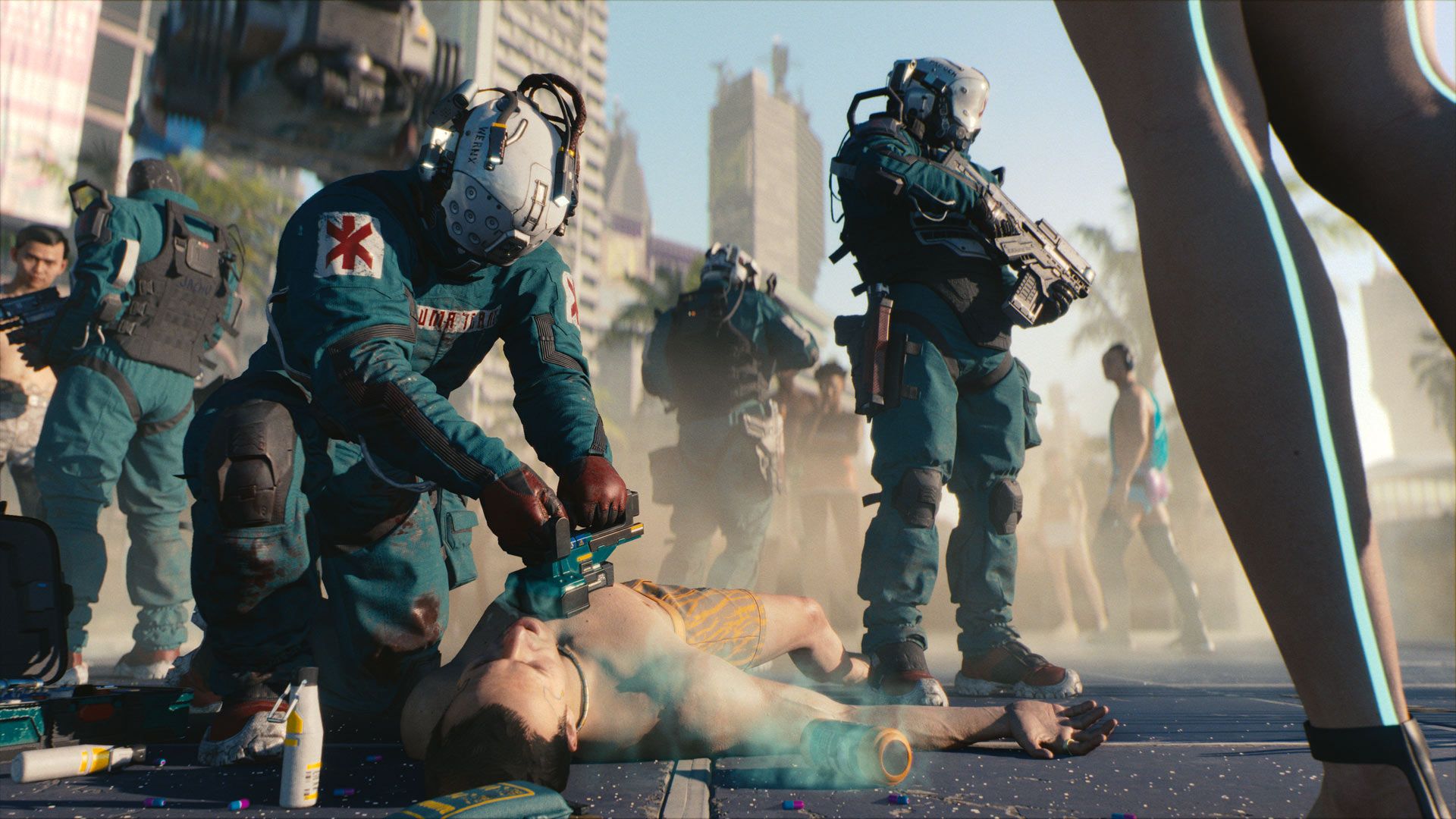 With plenty of well-designed mechanics on display, some satisfying depth of player choice and an intriguing setting, Cyberpunk 2077 was certainly one of the most interesting games we saw at this year's E3. Developer CD Projekt RED clearly has a passion to continue delivering high quality titles, and so far, their latest effort looks to be a solid one. There is no release window quite yet, but we can expect to see the game on PC, Xbox One, and PS4.