We get the first look at the next project by FromSoftware

It seems you’re not one of the cool kids these days if you’re not publishing a FromSoftware game. The studio, best known for the popular Dark Souls series, first revealed their new IP around one year ago, and there was a lot of speculation of what it would be. A revamp of one of their old properties? A Bloodborne sequel? Perhaps, gasp, a new Tenchu game. I wish. However, my prayers may have been answered with Sekiro: Shadows Die Twice, taking place in a tumultuous time in Japanese history. 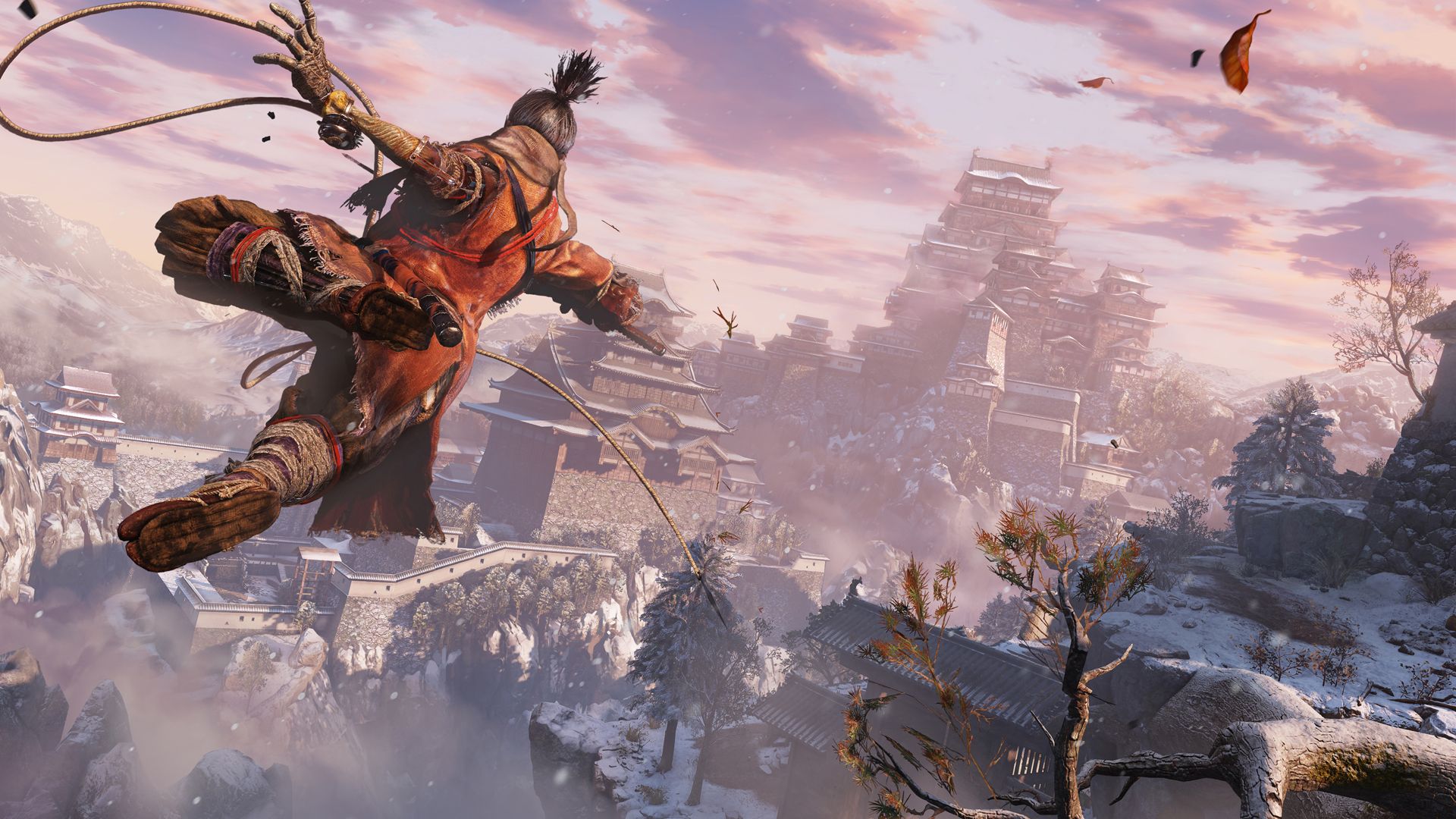 Promising blood, brutality, punishing gameplay, and all the other elements we’ve come to expect from FromSoftware, Sekiro is a third-person, action-adventure game featuring RPG elements. Players take the role of a ninja warrior on a mission is to rescue his master, a young lord, and exact gory revenge along the way. At this year’s E3, we got to sit in on a behind-closed-doors gameplay session showcasing combat, the game’s new verticality, and boss battles.

Like most FromSoftware games, Sekiro is no slouch in expressing itself through haunting level design. When we first met our protagonist, it was atop a hill overlooking a fortressed castle. The familiar sights of sloping Japanese buildings punctuating a rising landscape, all bathed in moonlight and a sprinkling of snow, injected a sense of creepy foreboding we’ve come to expect from the developers.

After soaking in the sights, our protagonist shows off his grappling hook, using it to pull himself away from his perch and stealth his way towards the first batch of enemies. Stealth in the game is not so much a core component, but rather one of the weapons in your arsenal. This means that it’s best used to thin groups of enemies rather than to eradicate them all. It is shown when taking down three enemies, including one large samurai. The first enemy we leap down and kill from upon high, quickly assassinate the other, and then focus on the big guy.

Hidetaka Miyazaki, president and game director at FromSoftware, wanted to create “clashing of swords” combat. You have a posture system, functioning similar to stamina. You can’t just wail on enemies, so the attack management from the studio’s other games is there, though the execution could be slightly different. You lose posture when you are hit, becoming fatigued, and when you do not block “perfectly”. If you block at just the right time, sparks fly and it reduces the enemy posture, leading to a “shinobi death blow” causing massive damage. We dodge, attack, and counter the boss samurai in an open, grassy area, showing off quick visceral combat, ending in a bloody finishing move with a blade in his neck. 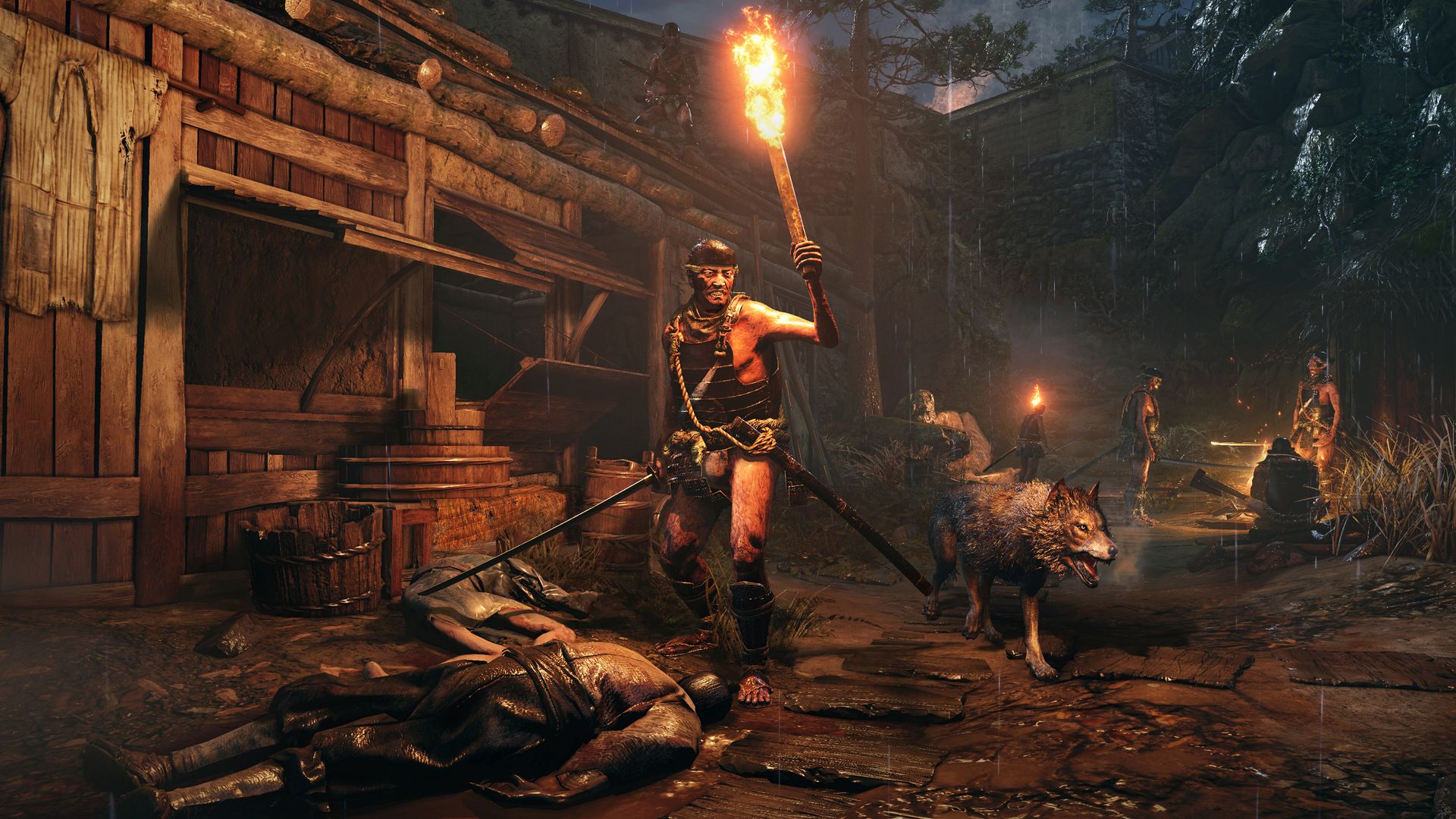 Then there’s the shinboi prosthetic, which was the arm seen in the trailer. This can come with a variety of attachments and functions. One such attachment is the axe, and we soon see its use when our protagonist meets a shield enemy. The axe is perfect for literally breaking enemy defences. Then, with the use of our shuriken, we can cause damage until we’ve closed the gap.

Onwards and literally upwards, we swing to an area and head inside a building. Here, we can stick to the wall and slide along, ala Snake or Rikimaru. Down a hallway, a flickering lights bobs up and down. Coming closer, an old, leather-faced woman totters along. However, we were quickly told that this old lady will scream for the guards if she sees us, so we have no choice but to eliminate the elderly.

Moving on, we peek around the corner and see a huge enemy chained up, with patrolling guards. We swing into the area, stealth kill a few guards, hop up a ledge and take down another - but the huge guy frees himself. He rushes towards us, hefts our ninja in the air, then powerslams him into the ground.

Or not. Because our ninja is resurrected soon enough, where he can bring the pain to our giant friend. Why he came back or how this functions is still a mystery for now, to be revealed further down the line. Speculation says that ninja have the ability to cheat death, so there may well be some lore backing up this design decision. There is a cost associated with it, and it may even lead you to getting one up on the enemy, so there certainly seems to be a strategic element to it. 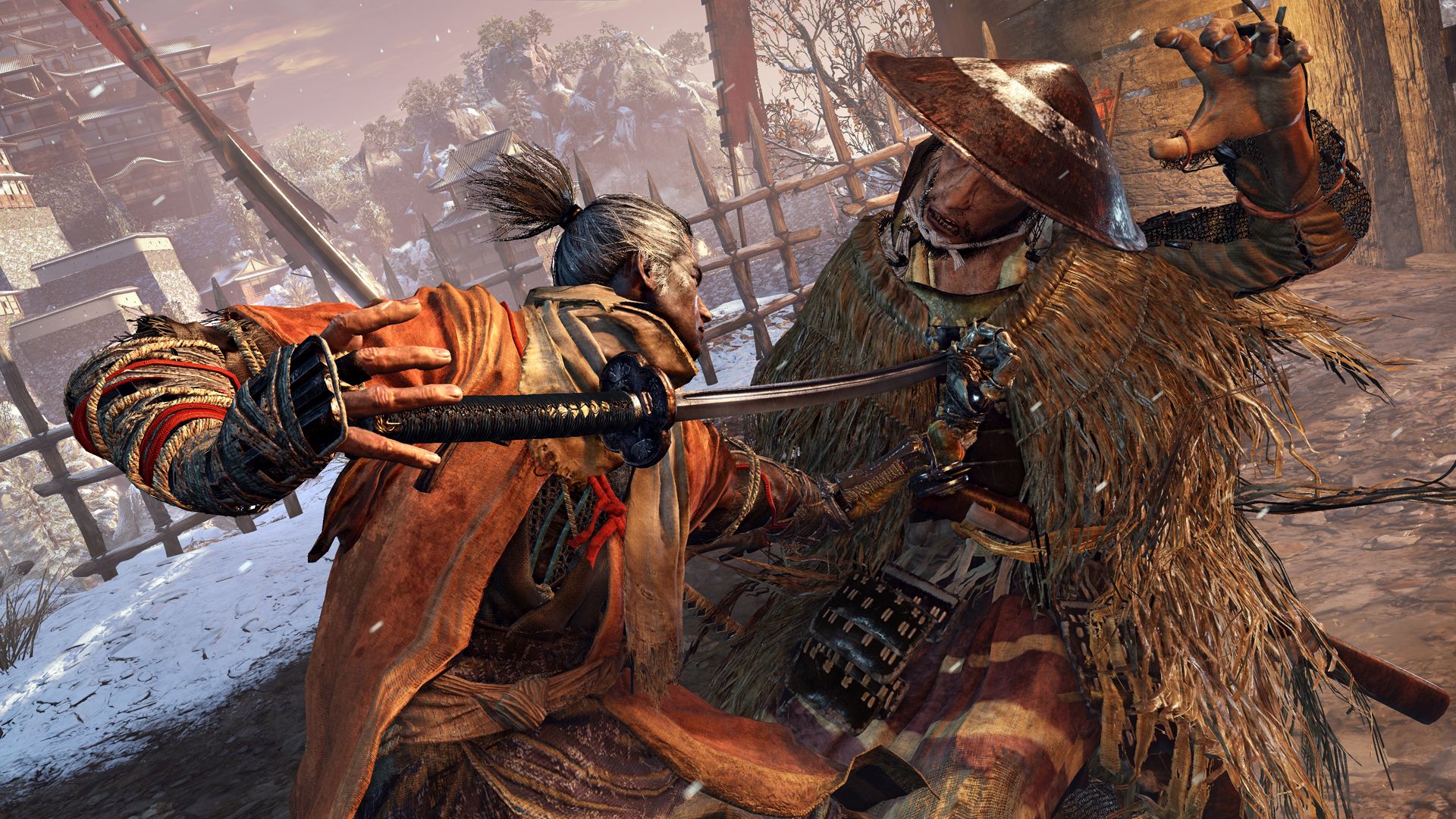 Further on we discover a destroyed bridge. With no way to go forward, we hop down into the ravine, jumping from ledge to ledge, farther and farther down. But we have company - a giant snake the size of a freight train. Best stay out of his way, so we crouch and hide in the bushes nearby. We were assured, however, that this section will have a bigger part to play when the game releases.

Dropping down farther, we arrive at a cave. Anyone familiar will ninja games or popular culture will notice that, while the tunnel ends in a wall, that human-shaped marking is perfect for leaning against. When our protagonist does so, the wall swings around and we’re in a new area. There will be multiple walls like this in the game, leading to alternate paths and new areas.

Tasting the sweet scent of freedom once again, we moved deeper into the castle. All that stands in our way now is a bridge… and a giant, glaive-wielding enemy about ten-feet tall, called a Corrupted Monk. As you might expect with an enemy of this size, he has a fair ol’ bit of reach on him but can pull off the rapid flurry of attacks too. Like most FromSoftware bosses, the first dance is all about learning their movesets and then being smart enough to spot their windups and avoid/parry them. What makes the battle more interesting is the fact you can use your grappling hook to propel yourself onto the tree branches lining the bridge and wait until your moment to strike.

In the battle with Corrupted Monk, we got to check out the full range of Sekiro’s combat, which looks to be leaning more towards a more vertical Bloodborne style than the more contemplative nature of Dark Souls. With the addition of verticality and stealth components, it creates a very visceral comno, but with a tactical edge to each encounter that looks to make each section of a stage a battle of wits as well as blades. 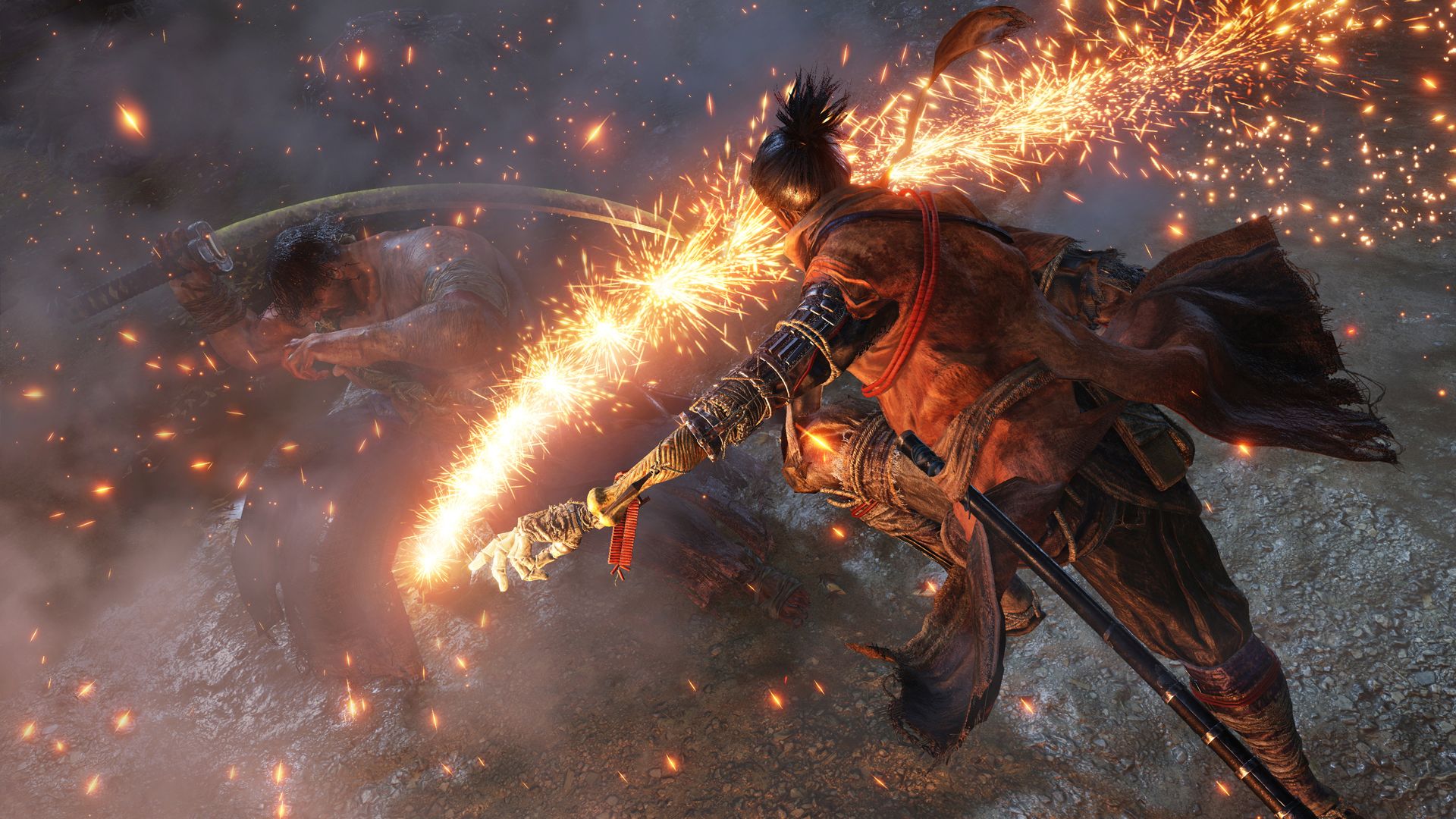 Sekiro seems to be a very strong next step from the team at FromSoftware, combining what fans love with new features to freshen up their latest offering. The game is currently planned for release on Xbox One, PlayStation 4, and PC in Spring 2019.