We get an early look at the RPG sequel from Deck13

Many credit the Dark Souls series with establishing a rather specific and successful gameplay formula. The combination of challenging combat, interconnected level design, and RPG elements produced a mix that has was a hit with many fans. Unsurprisingly, other developers have been trying their hand at recreating that formula, with varying degrees of success. One such attempt was The Surge, a futuristic action RPG that added unique elements of limb-focused combat and a fresh setting in hopes of grabbing the attention of gamers. It was a moderate success, and so the team at Deck13 Interactive have decided to follow it up with a relatively fast announcement of a sequel. We had a chance to see a demo of The Surge 2 at E3 2018. 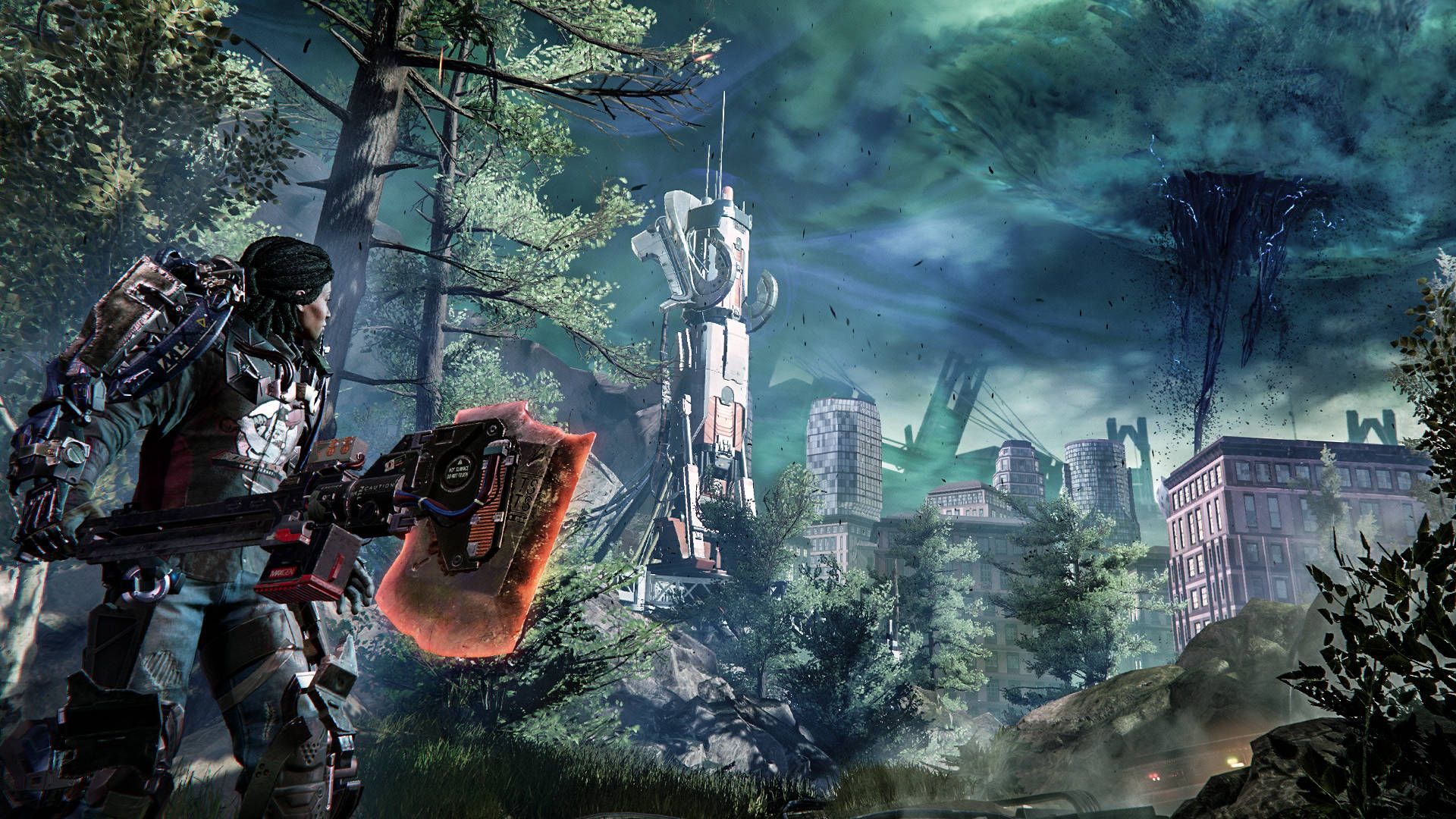 Our demo was hosted by Adam Hetenyi from Deck13. We were introduced to the new setting of Jericho City, a quarantined zone surrounded by walls to keep everyone in. While the first game largely took place in a factory, the sequel will expand on the level design and story elements, and thus could not be contained in a singular location. It won’t be a free roaming open world, though, as the developers aim to keep using the metroidvania-style level design to create a focused gameplay experience. That isn’t to say the scope is limited – there is a promise of larger levels, more interconnections, and more optional tasks that prompt players to explore. Story wise, the game takes place two months after the events of the original. Players will be able to create their own custom character, and as such the story will be your own, rather than following a pre-determined hero.

For our demo, the task was to locate a large creature in a park. To do so, we had to activate pillars around the area in order to force the creature to the center and be able to engage it; we also had to contend with bounty hunters who wanted the kill for themselves. The park itself wasn’t natural – it was a synthetic creation for the rich in the city, and this was showcased by the contrasting greenery and sci-fi structures, and tunnels, throughout the park. It wasn’t long until we crossed paths with a merc who was also after the beast. Here we got to observe some combat, and it certainly looked like The Surge. The same limb-targeting system is back, letting you hack away at certain enemy parts in hopes of disabling their functions and grabbing them for yourself later. The sequel promises new weapon types, for 10 in total, and some that are called “double duty”. Our demo had the main character wield such a weapon – a large axe, which could split apart into two axes, depending on player choice and combat situation. 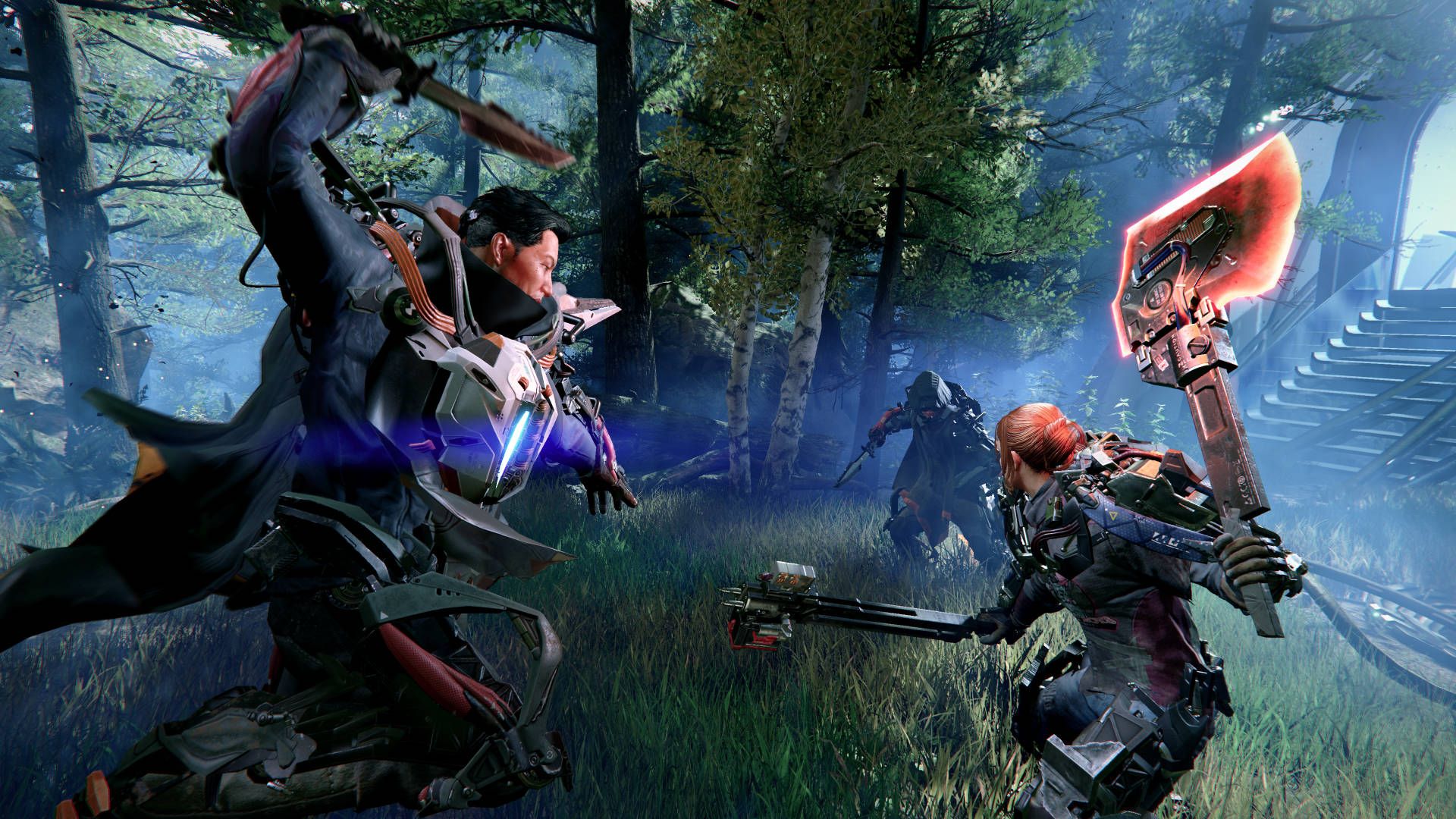 Having bested the merc, we proceeded through some tunnels under the park, and the developers pointed out that these could be explored further for optional quests and loot; for now, we stuck to the main objective. Soon, we came across another merc, who used a cloaking device. Using a scanning mechanic (which was an ability acquired earlier from a defeated enemy), we were able to engage the foe even though he was invisible. We attacked his chest to damage the cloaking device, and to make it fall off so it could be recovered for our own use. Following victory, we recovered his parts and got enough to construct a drone. The drone system will be expanded in the sequel, to make the AI companion a more useful and versatile tool in your arsenal. The implant system is promised to be expanded, and the game will also have a new consumables system, letting you craft things like bombs and molotovs.

A little further into the park, we came across two foes at the same time. Using the terrain to our advantage, we leaped from above to deal big surprise damage to one of them. While his partner began to circle around, we focused on the heavily hurt opponent. The melee combat in The Surge 2 is said to be improved, with players now being able to perform attacks, pushes, and blocks in specific directions. So if a foe is performing an overhead strike, you need to block upwards, accordingly. This also gives you more freedom to circle around and push enemies in the direction you want, such as off a cliff. While the first enemy was dealt with, his partner kept us on our toes with well placed ranged attacks. The developers say the AI in the sequel will be smarter and will work together when fighting. 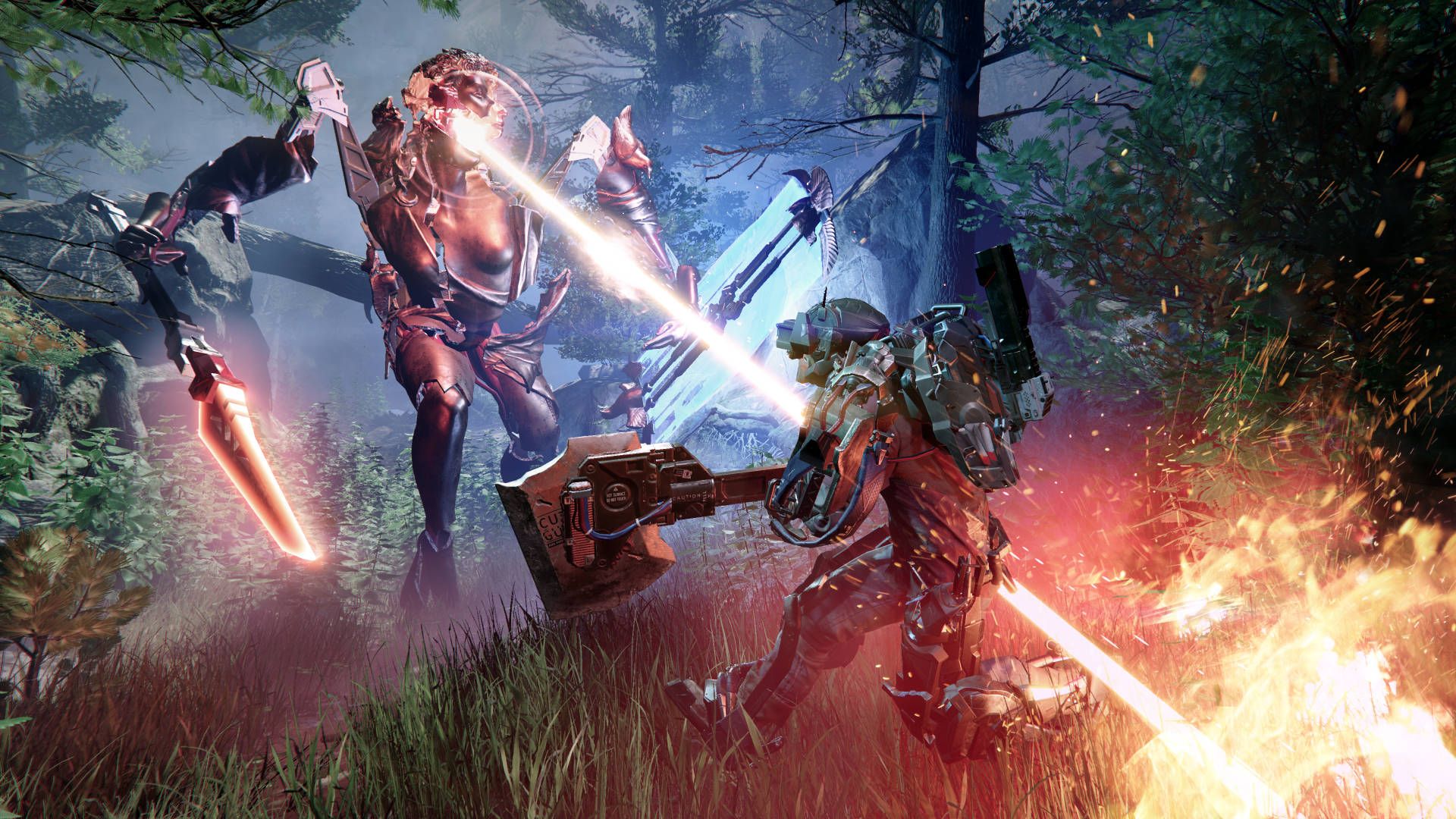 With both foes defeated, we proceeded ahead once more, but deep in the park a defensive robot was waiting. This so-called Goddess Helena was a boss fight, and its towering form certainly looked menacing. The boss was wielding a large shield, so attacks from the front were futile. Its attacks featured a huge and powerful beam, one which also left it exposed to counters, which we took advantage of. Having dealt a few critical blows to the head, the boss began to perform new sweeping melee attacks, but this used some energy so its shield began to weaken. By focusing on attacking the shield, we were eventually able to overload it, and once again leave it exposed to more punishment. Having defeated the boss, we heard the cry of a beast deeper in the park, but sadly this is where the demo wrapped up.

From what we saw at E3, The Surge 2 is shaping up to be a fairly typical sequel. The original has carved out a nice setting for this series and had a few unique gameplay aspects, and the follow-up is looking to keep going in this direction. The game has obviously done well enough to warrant a sequel, so fans that enjoyed the first Surge should be in for a good time when the sequel launches in 2019 on PC, Xbox One, and PS4.

All videos for The Surge 2 (8)
Advertisement ▼