We observe a hands-off demo of the upcoming multiplayer shooter

I love BioWare. I mean, who doesn’t? The legacy of games ranging from Baldur’s Gate to Dragon Age: Inquisition is one that any studio would kill to have. So why would you mess with a good thing? In the world of Destinys and Divisions do we really need another online co-op shooter? These are the questions that have been on my mind since EA announced Anthem last year. And the scripted gameplay trailer they showed off to help announce the game did nothing to assuage those fears. It came with all of the cringe as developers simulated player conversations and set the internet up for an endless series of jokes comparing the game to Destiny. 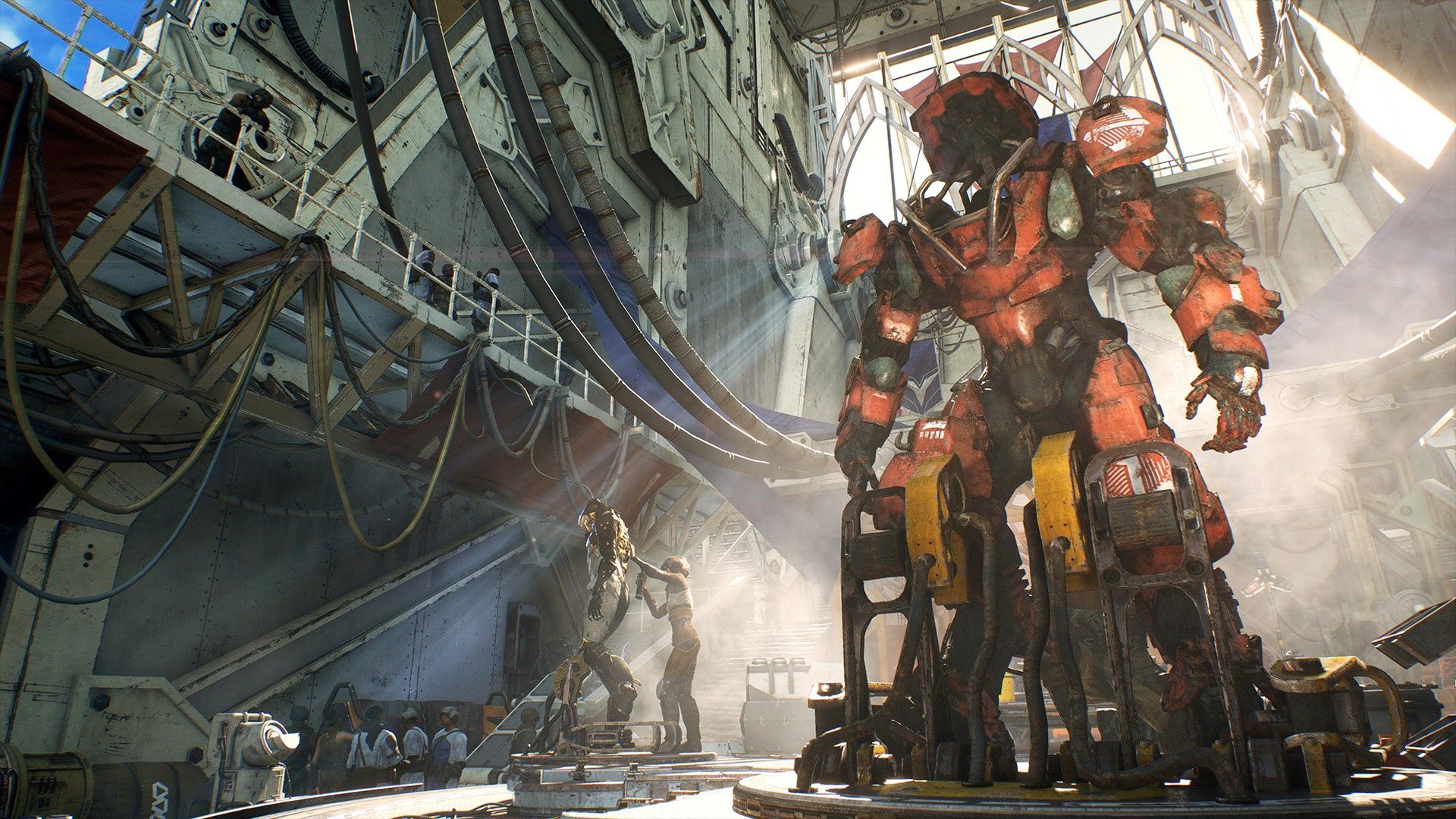 This year BioWare has tried to assure their fans that Anthem won’t leave behind the story-focused gameplay that feels synonymous with their name. There’s been promises that the game has a “BioWare” story (and fans should be painfully aware that BioWare stories include the likes of Dragon Age 2 and Mass Effect 3), but it sounds more like Anthem will have the kind of narratives BioWare built in The Old Republic - or the supposed hub-world structure that was talked about in the now-defunct Shadow Realms. The Shadow Realms comparison feels particularly apt as Anthem also uses a hub world to get upgrades, continue the story, and talk to characters.

We didn’t get to see the town hub during our EA Play 2018 demo, but we did get to see the forward command station. That’s where our hands-off gameplay experience began. Much like last year, the dialogue and cutscenes play out in first-person, though the player-character sounds like they will be voiced. Three non-playable characters moved about the station, quickly barking dialogue at us, hurriedly explaining the mission we were about to undertake.

By the end of the first-person cutscene, the player climbed into their Javelin (the name for the exo-suit power armor characters wear to survive in Anthem), and pulled up the mission select screen. It’s in this screen that players transition to the multiplayer experience. Here they would invite friends and select a starting point for their mission.

Part of this requires extrapolation as it’s a little tricky to tell if the mission you pick limits your world traversal options or if it simply is a waypoint to begin your adventure. Two other players joined the one we were follow as they all loaded into the world, shooting into the air using their Javelin exosuits. There’s some interesting interaction available in the world, and it seems that BioWare has taken elements introduced in other shared-world shooters and attempted to evolve them. One example is how players could fly through waterfalls to cool their overheating jetpacks. The flying is a fun way to traverse the world and it creates a sense of verticality that other shooters lack. 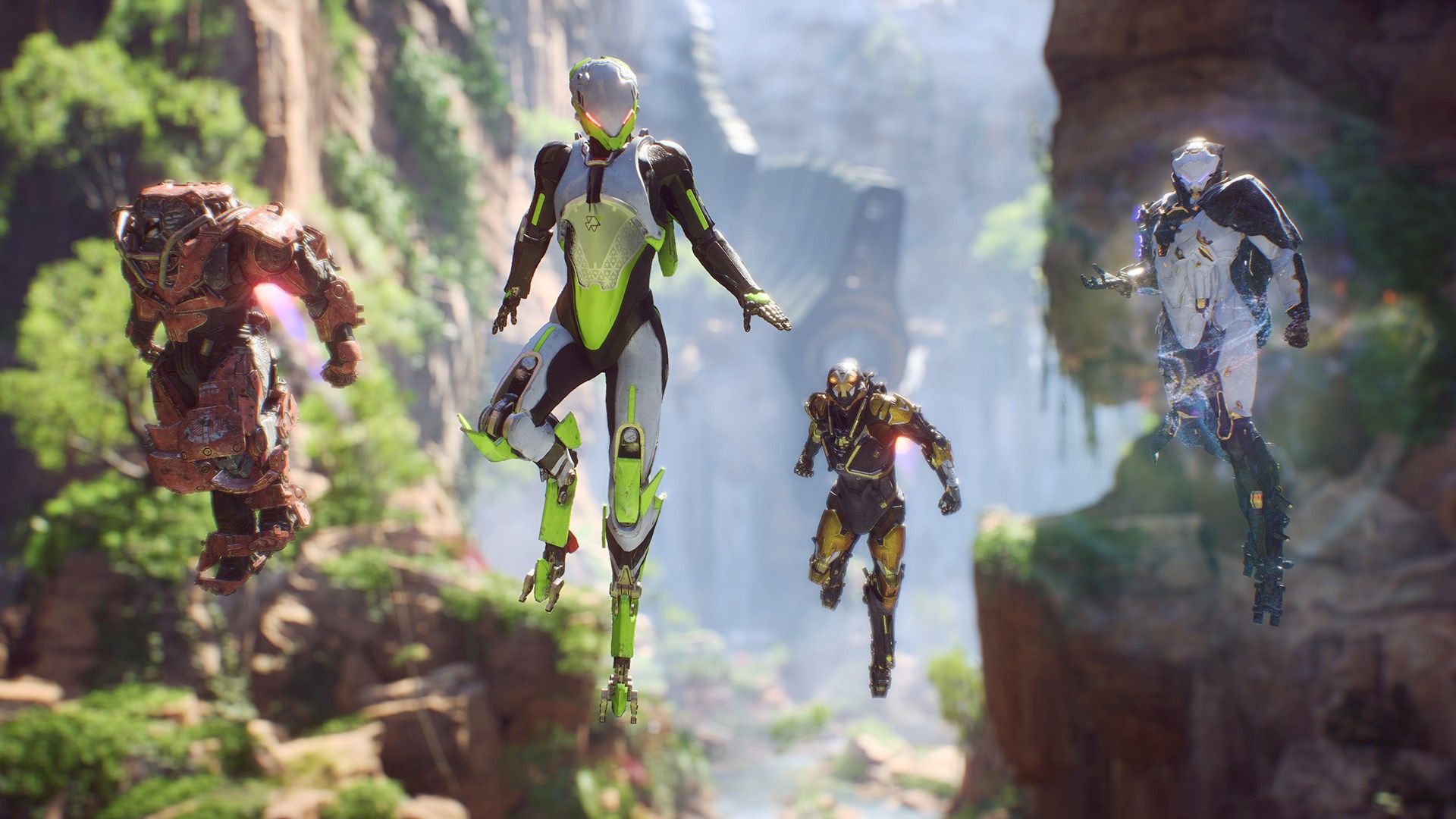 Soon the players arrived at an enemy outpost. The main villains of Anthem appear to be the Scar, a sentient race that survives in the wilds outside of the city walls. Before jumping into a fight, a fourth player loaded in and it was explained that the co-op in Anthem can be drop-in/drop-out. BioWare also said that there are no character level requirements to play together, as even the lowest level characters can help with high-level missions.

The players leapt into an attack on the Scar outpost. The combat arenas in Anthem are large, providing a lot of space for different flanking strategies and maneuvers. As enemies went down, I saw the giant colossus piloted by the player we’re following walk over health pickups, powering up their suit and replenishing any health being lost in the fight. Soon the nearby enemies were cleared out, but there were still turrets firing at the players and the wildlife that fills Anthem’s world. We were told that there are multiple ways forward now, but the players hang a left and fly away from the Scar outpost.

While all of the action raged on, we can hear the assistant AI, Owen, talking to the player. Much like ghosts in Destiny or SAM in Mass Effect: Andromeda, Owen is a snarky little AI that makes glib remarks and whispers concerned warnings while providing context for the world of Anthem. As the Freelancers (what our heroes are called in this world) flew over the world, Owen quipped that something is wrong and he was quite right. A giant monster, called a Titan, stood in the middle of the forest, firing a giant beam from its chest. The monster appeared to be too powerful for the players to deal with and they chose to bypass it, avoiding a fight and diving underwater to enter a Stronghold.

Strongholds are four-player missions that are a little bit longer and a little bit more difficult than most content in Anthem. They sound a lot like raids. The objective of this Stronghold was to shut down an old Shaper relic. The Shapers are an ancient race in Anthem that had a role in the creation of the world. This giant relic rumbled in the background as the players leapt into combat. The area was big enough that there are three different sections to the combat - a group of snipers are up high on a ledge, a cluster of elite soldiers were huddled on the ground in the middle of the expansive cavern, and turrets were firing down from an elevated position on the left. The players quickly took out the snipers, then rumbled their way into the middle, battling the elite soldiers. 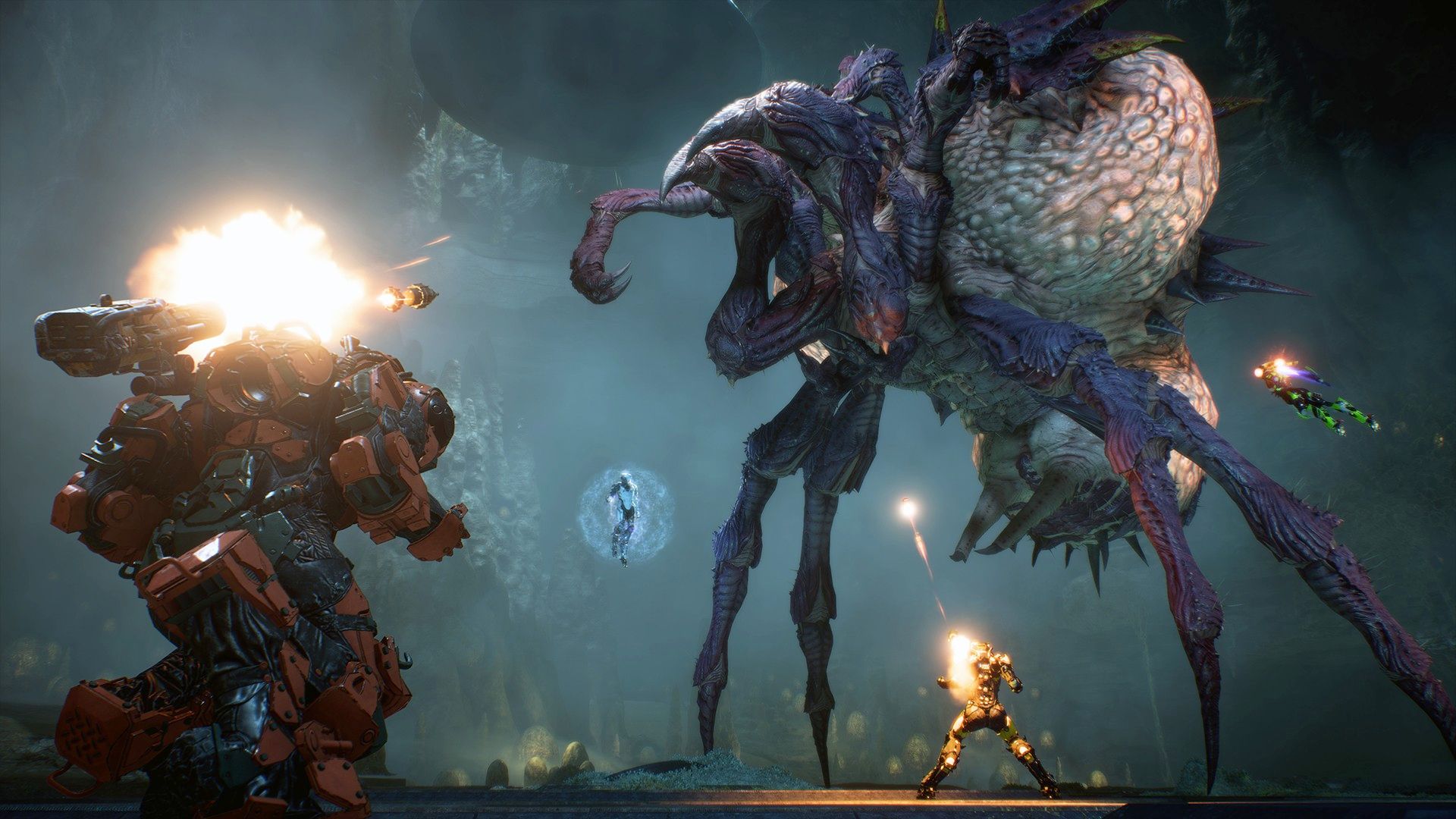 I was a little struck at this point by how little the jetpacks in the Javelin suits were factoring into combat. They’re such a clear part of the traversal, but I didn’t see a lot of verticality in the shooting. Part of this is might be that we were following the Colossus class, who are more focused on firepower and are large, hulking chassis. The Storm class was hovering over the battle and clearly had a little more verticality and speed to their play, but it’s not as dynamic as one might expect.

After the enemies were wiped out, the players gathered the little balls of light that were needed to turn off the Shaper relic. Once it was disabled, Owen said something ominous (it kind of feels like his job is to tell jokes and be ominous), and the players found that there was an underground labyrinth of insect-like enemies hidden beneath the Shaper relic.

At that point, our demo skipped ahead a bit in the interest of time. Owen said another ominous word of caution and a giant bug crawled down from the ceiling. This gigantic beat was a real bullet sponge. Players poured bullets into it and very little damage was being done. We were told that the Freelancers would need to use strategy to focus fire on the giant sacks around the enemy, exploding them to disable the monster and then hitting the revealed wounds to do extra damage.

Even while using this strategy, the monster still seemed like it was soaking up most of the damage without much issue. It did create an opportunity to show off some of what the different attacks are for each class. Skill attacks are assigned to the bumper buttons and a special attack can be used by pressing both bumper buttons at the same time. The Colossus used this to fire off a series of missiles that created a powerful fire wall. There were also a couple of times that we got to see combo attacks. The Storm would electrify or freeze the enemies and the Colossus would use the opportunity to blow them away, dealing extra damage. 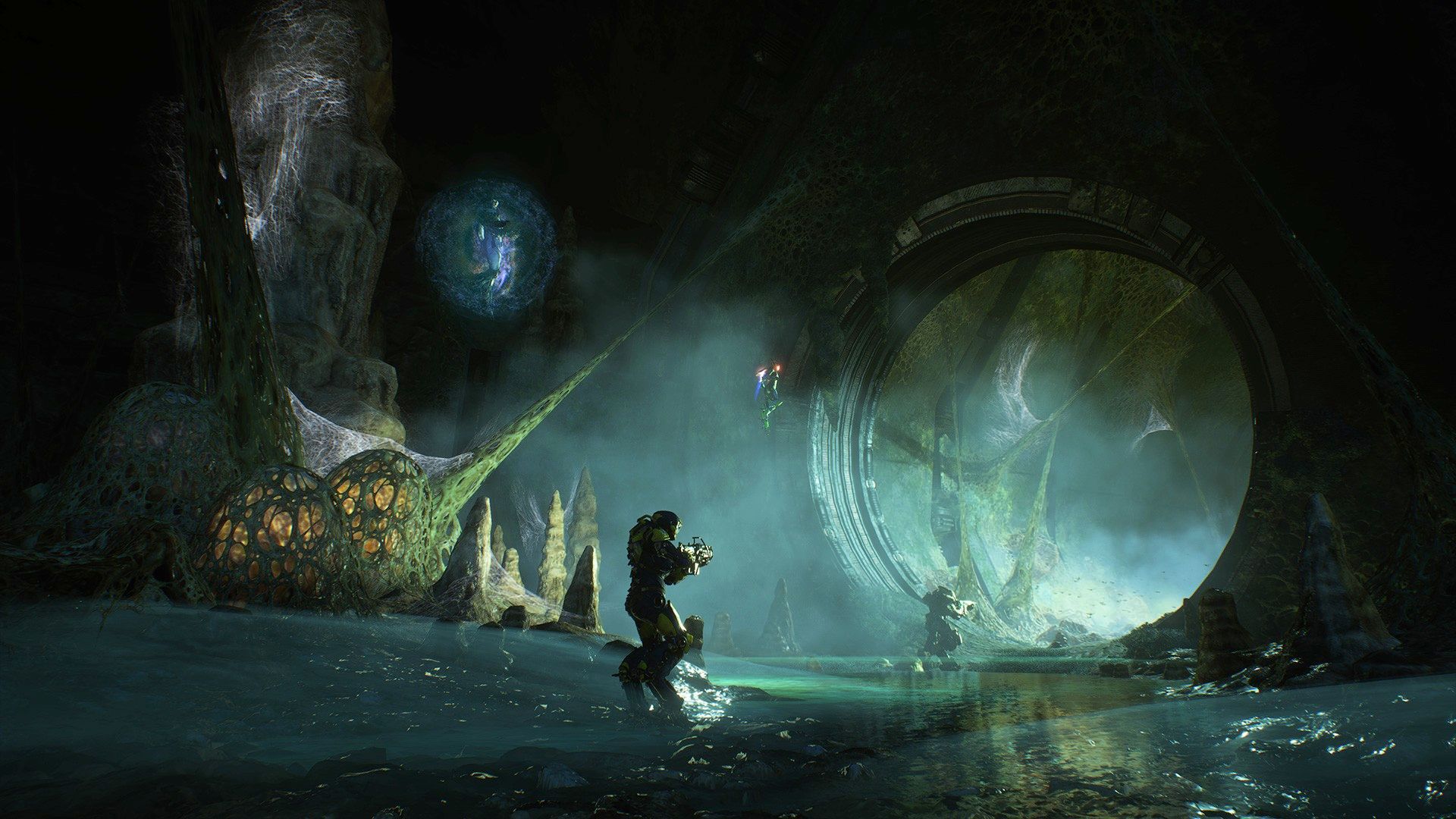 After a quarter of its life was whittled away, the giant bug retreated, crawling away like one of the creatures you’d fight in Monster Hunter, leaving behind a series of minions to battle. When it returned, a cutscene was triggered and the demo ended.

So why make a game like Anthem? Why rewrite the BioWare legacy? In some ways it feels like the game that BioWare has been building to for some time. Starting with Mass Effect 2, BioWare has clearly spent more and more time working on sci-fi shooter mechanics with multi-character parties in expansive combat arenas. Even in the much-maligned Mass Effect: Andromeda, there was an indisputable evolution in the shooter concepts. Studios change with time and so must the kind of games they make. BioWare cold have pretended to still be the same team that made the old Mass Effect games, but it’s clear they have a different team now who are ready to make something different. And if it looks as fun and as explosive and expansive as what I saw while at E3, I have to say that I’m onboard for that. Who knows if Anthem will be good or not, but I have to admit that while I was watching the team play the game, I was ready to stop watching and start playing.

Anthem is scheduled to launch in February 2019 on PC, Xbox One, and PS4. 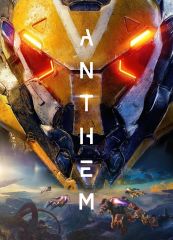 All videos for Anthem (7)
Advertisement ▼