Elegant adventuring with an intriguing story and a distinct style

Point and click adventure games have had a bit of a resurgence in the last five years. Veterans of the genre returned with new games; Tim Schafer crowd-funded the cloud-hopping Broken Age and Ron Gilbert took gamers back in time with the pixelated Thimbleweed Park. These adventure games were faithful because they featured some bizarre puzzle solutions and traditional pixel hunting. Unforeseen Incidents is a streamlined version of such a game that does away with messy mechanics and doesn't ask players to make leaps in logic. It succeeds because of sensible puzzles, an excellent narrative, and a slick visual style. 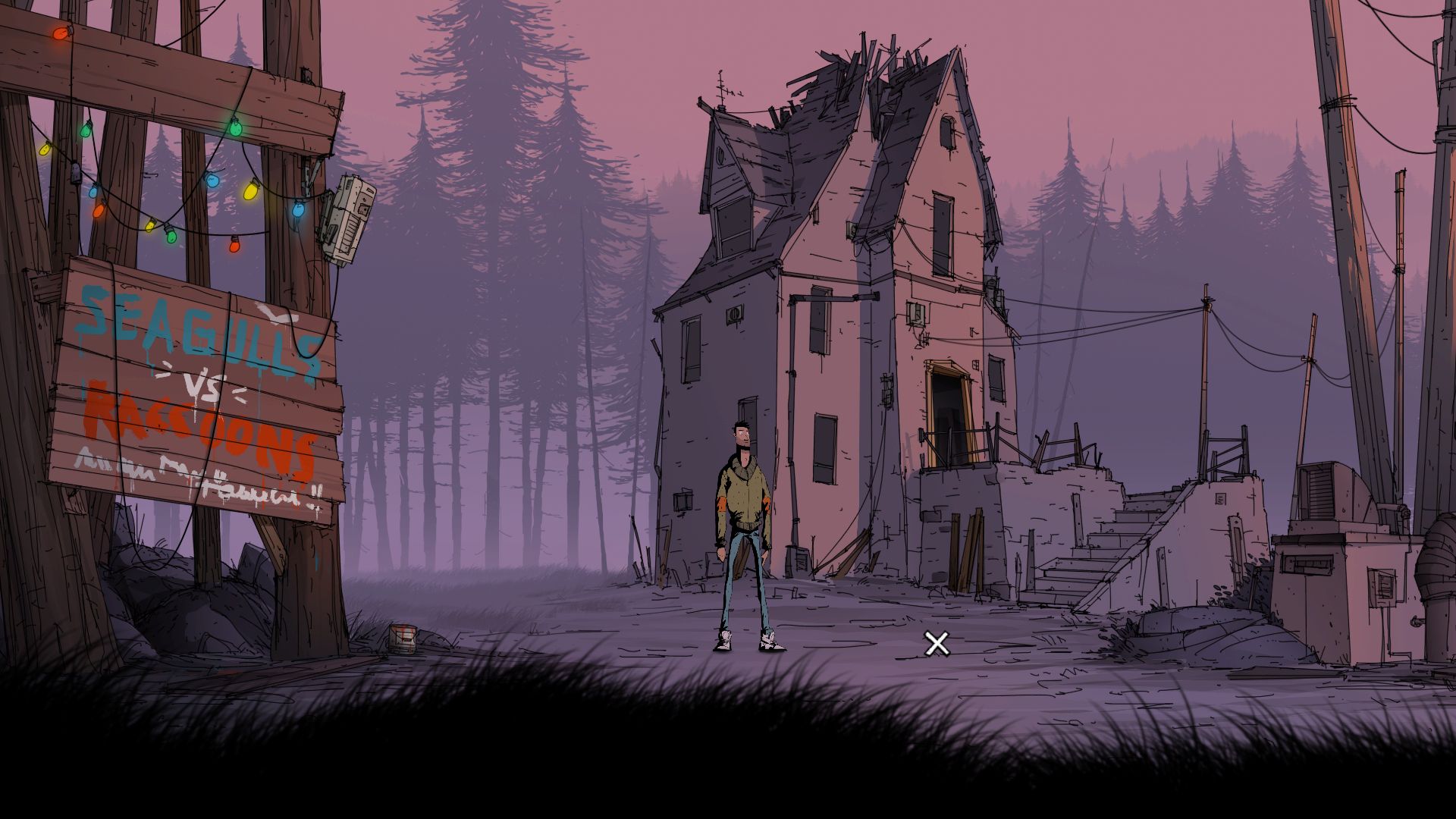 Players take the role of Harper Pendrell, a college dropout living a lonely life in Yelltown. He has a fascination for ham radio and VHS tapes, helping to bring retro quirkiness to the modern-day adventure. Harper is a handyman and the town is on the cusp of a viral outbreak. The adventure starts with a tech support call; a local professor needs help with his laptop. Harper fixes the problem, with his trusty multi-tool, and then stumbles upon a woman coughing up blood, infected with the so-called Yelltown fever. She asks him to deliver a message, as it contains vital evidence of future medical negligence. This sets off a rather intriguing tale of conspiracies, cults, cupcakes, coffee, and crazy men in the woods.

The story is incredibly well told and finely structured. It's split into chapters that have a distinct style and a different set of characters. Harper will venture around the rural town of Yelltown at first and then into the gloomy Graystone Woods to triangulate radio signals. And before visiting the final location, he will explore the clean harbor town of Port Nicola. These are great locations. Each has around a half dozen areas to explore and none overstay their welcome. They are all home to interesting characters, fully voiced, such as the overly-protective park ranger, Jervis, or the junkyard owner, Leroy. There is a large amount of quality dialogue to uncover. All the characters belong in the world, often with interwoven back-stories, so they have a reason for existing outside of merely having an object that Harper needs.

The main cast pulls it all together. Harper is a bit of a joker, mostly when investigating random spots in the world, but the tale is not flippant and holds a consistent tone. The journalist, Jane Helliwell, helps to uncover the truth and nudges Harper in the right direction on more than a few occasions. And the Professor, with the initial laptop issue, works on a cure for the virus. Aside from not providing strong closure, the story is an elegant mystery and far more than just a driving force between the puzzles. 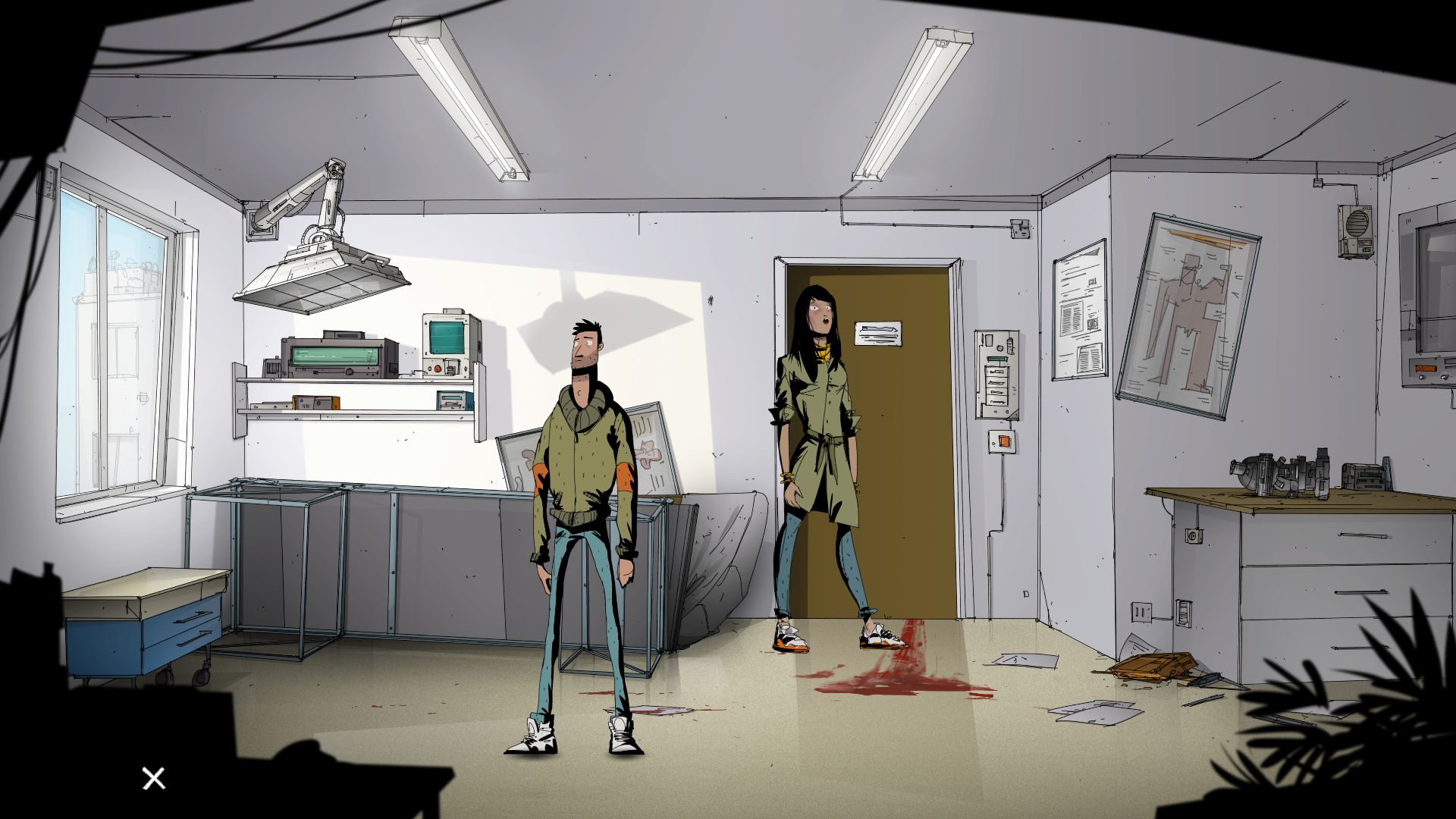 Harper's multi-tool will help to solve a great many problems and it’s the only item that travels between locations. The tool is comprised of many different components: screwdriver, scissors, blade, bottle opener, and more. It's used well early, to access panels or repair electronics. It also helps to do away with needing to find typical adventure game objects. The tool gets used less as the adventure continues, relegated to merely opening locks in the final parts. This could be symbolism for Harper evolving, although I don't recall ever using the file. The good multi-tool could have been simplified but still proves important for many of the puzzles.

The rest of the puzzle solving is typical for a point and click adventure, albeit streamlined and logical. There's no pixel hunting because one tap with the spacebar will show every interactive item in the area. It's simply a matter of collecting things, merging them together in the inventory, or dragging them onto people or objects in the world. You'll need to mix chemicals to develop photos, start a fire, use a VHS tape to distract, repair a car, and put a scarecrow to use. Many of the solutions are quite retro, but there are computer systems with passwords to bring the adventure into modern times.

There are often several major objectives in each area, so progress can usually be made even if you get stuck. The game does a clever job of giving important items early, like a USB stick or fishing wire. Harper’s inventory often contained more than 8 items, but many were not needed to solve puzzles; hot spots in the world might not be part of the solutions either, so trying all objects on every point of interest is just going to waste time. All the puzzles are sane enough that you won’t need to brute force them anyway. 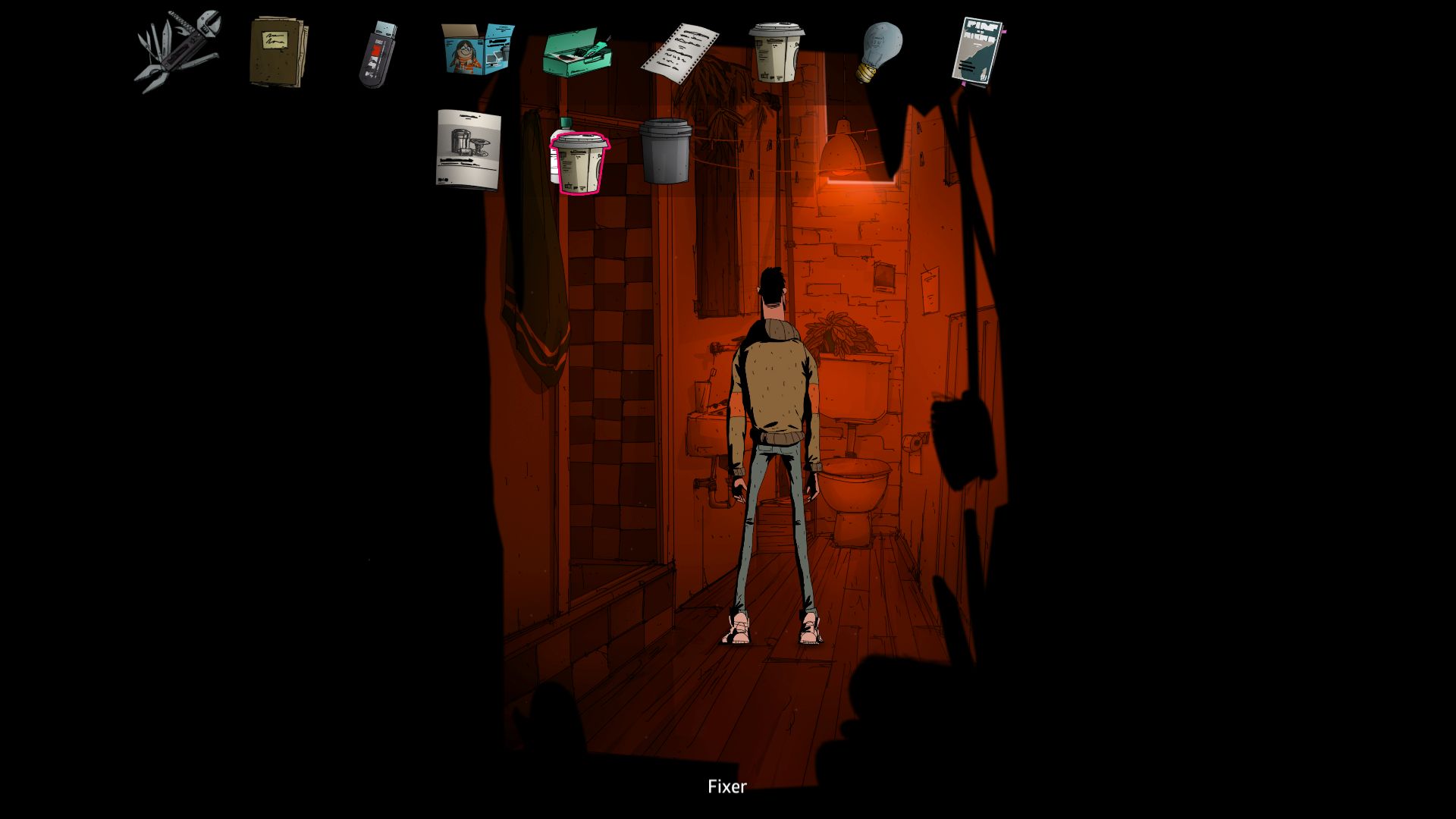 While most of the puzzles are logical and well crafted, the best ones come about when they blend with the story-telling. Snippets of information from people will help solve puzzles. Feuding brothers need to overcome their differences, so you can restore power to an old man's farm to use his tractor. Conning an informant means getting some information from a character that temporarily relieved you of your possessions. And that crazy man in the woods has an organic appetite and makes more sense than it seems. It's not just that the puzzles are great—they are all interconnected with the story.

The 2D visual style is excellent. The characters have dark outlines and the world backgrounds are stylized with a good amount of detail. Characters have harsh shadows on them, so it ends up looking a bit like paper cut-outs mixed with a graphic novel. It’s not overly colourful, but there is good variety across locations. The only blemish is that some conversations zoom in too far, resulting in blurry characters. Music is subdued but fits quite well with the mystery theme.

There are not many technical issues but loading times between areas sometimes took upwards of 15 seconds. This was quite frustrating near the end location as Harper moved back and forth between screens rapidly. There were also a few texture glitches on characters, but overall it’s a consistently nice looking game. 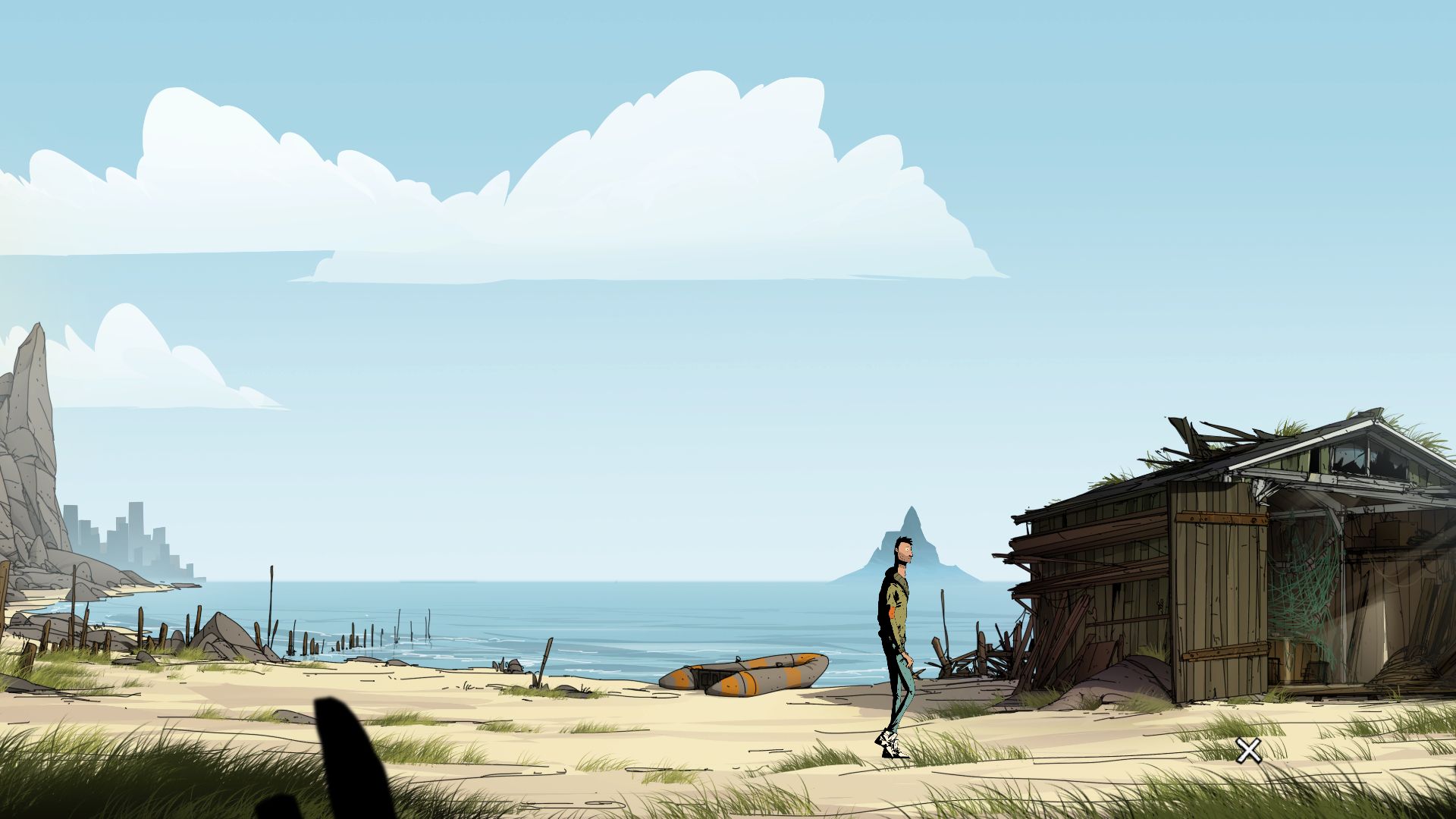 Unforeseen Incidents is an excellent adventure because it has coherent puzzles, a great story, and a distinct visual presence. Veterans of point and click adventure games might find the puzzles a little too easy, but there is more to this quest than the brain teasers. The high quality comes from the interconnection of puzzles with the narrative and the overall delivery of the mystery with a strong cast of well-voiced characters. It also has a fine visual design that holds strong for the entire 10 hour adventure. Unforeseen Incidents is a thoroughly entertaining game that streamlines elements of the genre to great effect.

Our ratings for Unforeseen Incidents on PC out of 100 (Ratings FAQ)
Presentation
82
Awesome voice work for characters, distinctive visual style, detailed backgrounds, and offers both variety of locations and consistent designs.
Gameplay
81
Puzzles are all logical and that is quite refreshing. The story and puzzles are woven together and this helps make it relaxing to play.
Single Player
85
One of the better adventure stories in recent times, thanks to character depth, structure, variety, and layers of mystery. It's easy to get invested and want to progress for answers.
Multiplayer
NR
None
Performance
(Show PC Specs)
CPU: Intel i5 3570k
GPU: XFX RX 480 GTR Black 8GB
RAM: 16GB DDR3
OS: Windows 10 Pro 64-bit

75
The load times between areas can be too long. There were infrequent texture glitches and a few lip-animation problems.
Overall
81
Unforeseen Incidents presents a delightfully captivating conspiracy with wonderful characters and perfect pacing. Its puzzles succeed because they are rational and connected with the story. The icing on the cake is the pleasant and striking visual style. 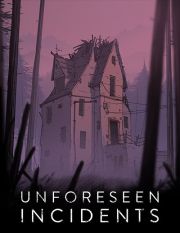