Arcade racing with a colorful twist

It's difficult to break through the indie scene – with so much competition, your game really needs to stand out. Whether using unique gameplay, striking visuals, or just good worth of mouth, the crowded market has high expectations from developers. Trailblazers hopes to break the mold by offering a unique mix of racing and strategy gameplay, combined with a great soundtrack and nice visuals, as well as a higher asking price in hopes of fitting into the mid-tier market. While the core formula is a success, a few other factors prevent this title from truly taking over the podium. 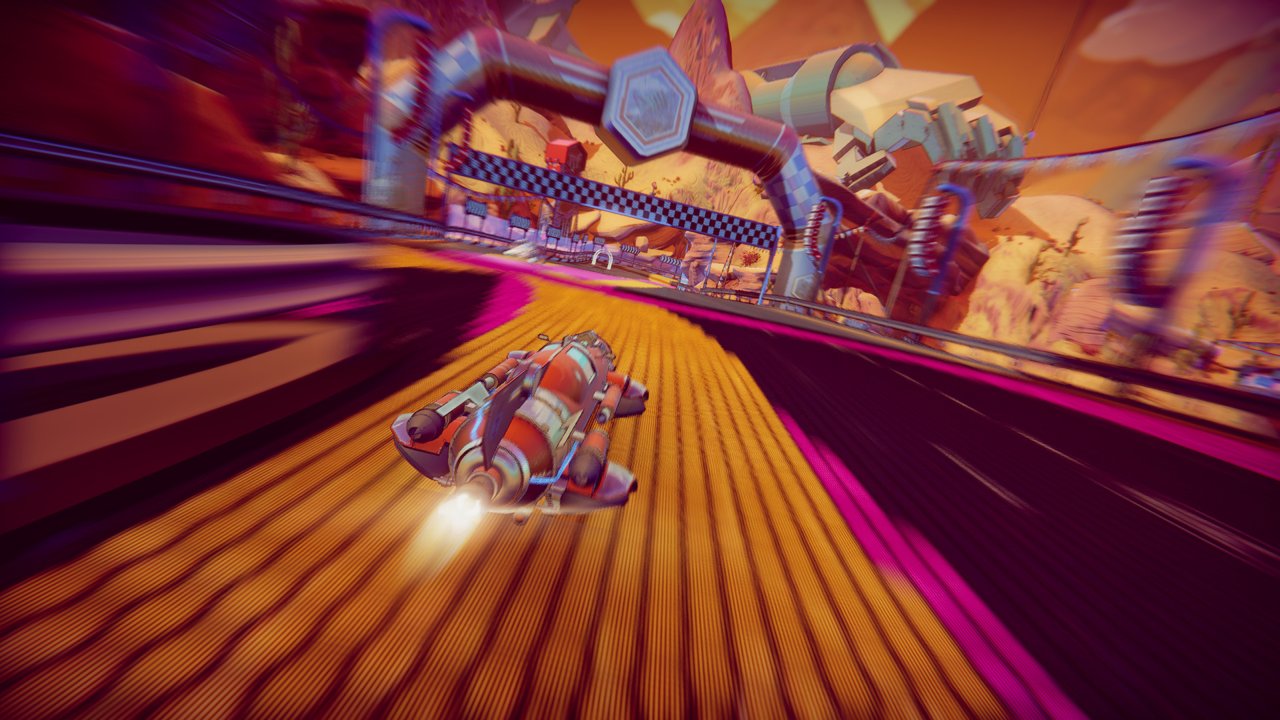 Trailblazers is an arcade racer that puts you in control of any of the 8 alien characters, each with their own vehicle. These cars have various stat allocations in three categories – trails, boosting, and handling. You'll compete across a variety of tracks that often feature a multitude of corners, elevation changes, alternate paths, and even going upside down. The cars and track designs definitely feel inspired by franchises such as Wipeout. There are about 10 tracks total, but they can be played in mirrored and reverse configuration for added replayability. Racing itself feels accessible and entertaining, and controls are responsive without requiring a whole lot of precision. Boosting has a nice sense of speed. Crashing into walls or opponents doesn't put you too far behind, and on the whole the mechanics are fairly forgiving.

The unique aspect of Trailblazers is what you do in the race. This isn't a game where you simply aim to finish first – that's just one third of how the final placings are determined. Instead, in a Splatoon-inspired mechanic, you paint the race track with your car. Each character has their own color, and a limited supply of paint that refills overtime. As you drive, you can spray the color beneath your vehicle and try to cover as much track as possible. On the subsequent laps, if you drive over your own color paint, you get a speed boost. It's straightforward design that really works and feels unique in a racing game. There are some satisfying strategy aspects to consider; you have to wait for paint to refill, you have to pick routes that you'll take every single lap so you can take advantage of your own boost, and of course paint over as much of your opponents' paths as you can, as they also do the same to you. Each lap is different, and things change because every passing opponent can just paint over your planned and prepared boost route.

A couple of other elements are also worth consideration. You can save up paint until the gauge is full, and then unleash an attack that sprays a batch of paint on the track in front of you, which spins out any opponent directly in its path. There is no way to know if this attack is coming or a way to avoid it, so the game finds a careful balance of only slowing you enough for the attacker to pass, without causing extreme disorientation. The attacking car also needs to swerve around, otherwise their advantage is lost if they simply keep driving straight and crash into you. Tracks also feature small gates that you can pass through, which similarly spray a line of paint ahead for you to use. All of these paint mechanics come together to create a fairly involving and satisfying racing experience that's unique to the genre. 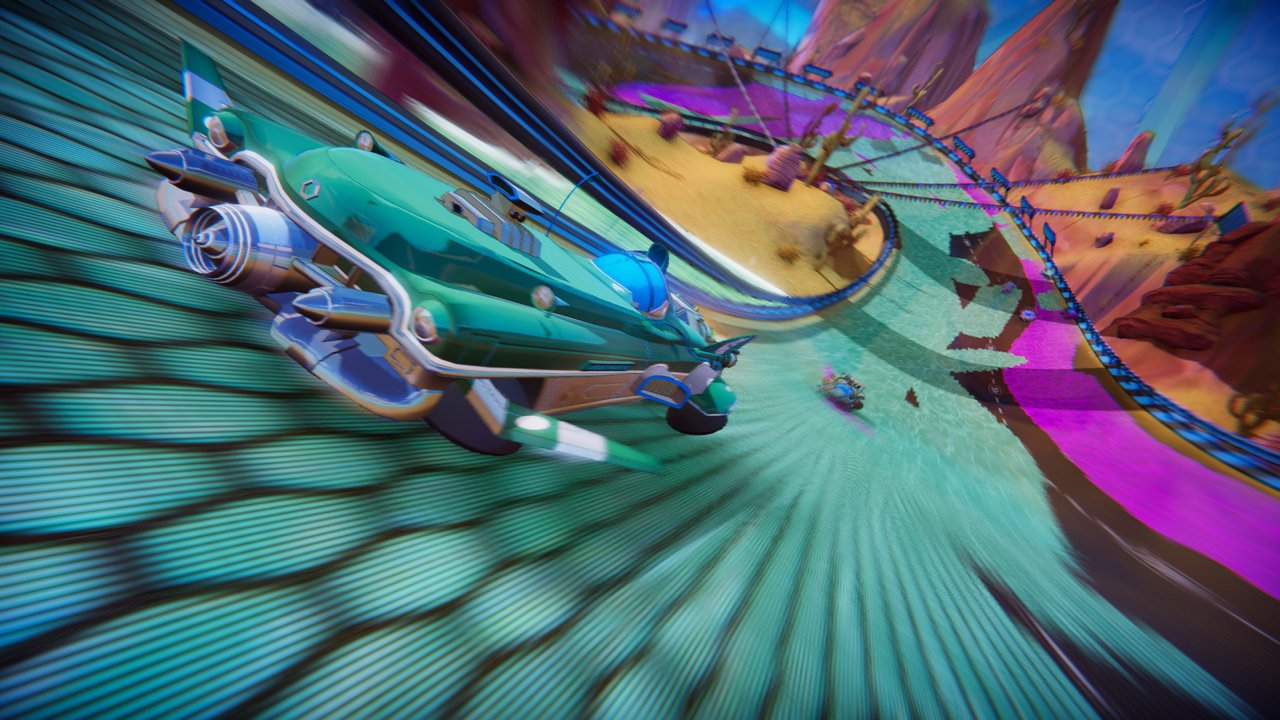 The career mode gets you to take the on roles of each character and try out their rides. It also acts as the initial tutorial for the gameplay. You'll also get a little bit of background on the cast, though it's mostly fluff that carries little weight. Going from race to race, you need to complete various standard objectives such as specific finishing positions, reaching a certain score, and so on. One issue with the career mode is that some events are only a couple of laps long, which gives barely enough time to formulate a strategy, apply enough paint to get worthwhile boosts, and so on. The AI difficulty is uneven, and the short events often leave you with little time to catch up if you have a bad start. Completionists can get some value out of career by trying to beat all the given objectives, such as specific placements, finishing ahead of certain opponents, and so on. For the most part, career is where you'll get comfortable with the controls and the gameplay mechanics.

There are a number of gameplay modes to check out – standard races, timed races, team races, free for all, and partner battles. There's also a fun mode called Gate Chase, where players race to activate as many gates as possible as they are one-time use and will paint the track with the player/their team's color, and there are no other sources of paint in this mode. In most of the modes, finishing first isn't the ultimate goal. The game actually decides on the winner by compiling three scoring categories: finishing position, boost combo, and paint combo. The latter two combos are earned by performing corresponding tasks without crashing into opponents or walls. So, even though you and your team did not grab the podium, you could still win the event through skillful driving.

As with most racing games, Trailblazers puts a lot of focus on multiplayer. Any combination of up to four racers can play together either in local split screen or online. Playing locally can feel rather cramped, as the camera tends to be quite close to your car and some of the more severe track bends will leave you without any view of what's ahead. While both online and local multiplayer functions without any issues, the online population is unfortunately missing at launch. In hours of trying, we were unable to find more than 2 multiplayer races, and they were with one other opponent and the rest were AI drivers. The game does offer cross-play matchmaking with console versions of the game, but this did not produce any results either. Sadly, the matchmaking is essentially empty, so if you're hoping to race with other players, you will need to recruit some friends manually. 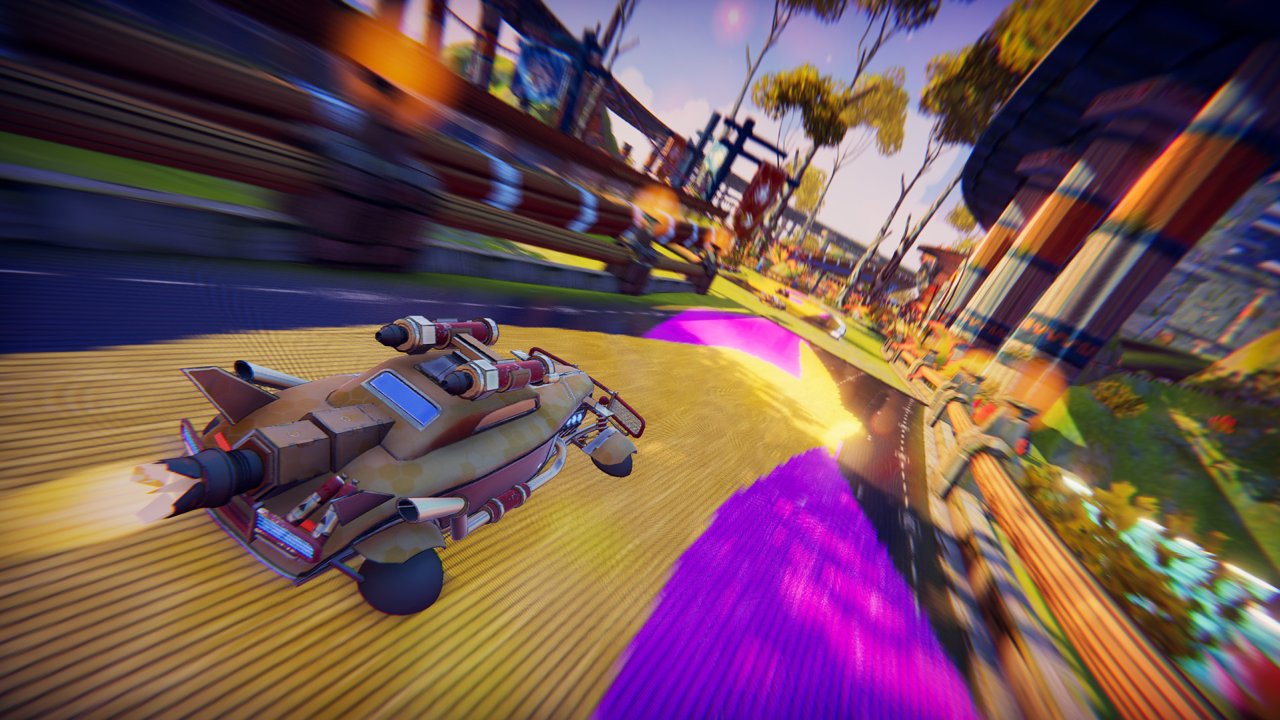 Just as the gameplay and design are inspired by other games, so is the presentation. The game's colorful visuals and alien characters are a mix of sci-fi Borderlands, with a cel-shaded style to match. The tracks are colorful and bright, and the game runs without any technical issues. Though, it's worth noting that a controller is a requirement rather than a recommendation, as you can't even navigate the menus without it. Another bug that was noted is the game losing your configured visual settings if you back out to the start menu screen. At the end of races, the loud sounds of the action carry on into the result screens, and only stop when you're loading the next track. Otherwise, the game manages to perform smoothly and keeps a steady framerate even when you are boosting at high multipliers. Audio design is inspired by Jet Set Radio, with plenty of scratchy sound effects in menus, and a soundtrack consisting of some rather excellent original songs. There aren't many of them, mind you, but they are very well done.

Although the game has unique gameplay mechanics and there is some fun to be had, using a name as generic as Trailblazers really doesn't help it stand out in the sea of titles that get released every day on Steam. Before writing this review, I struggled to even remember the name of the game that I had spent so many hours with. And while it probably deserves better, the game's multiplayer modes are barren right now. As it stands, Trailblazers is worth considering if you've got friends that are all committed to racing together and are looking for a unique twist on the gameplay. Otherwise, it's probably best to wait for sale or hope that it takes off in popularity a bit more.

Our ratings for Trailblazers on PC out of 100 (Ratings FAQ)
Presentation
74
A very bright and colorful game with a great but limited soundtrack. The art design isn't exactly original.
Gameplay
75
Adding a splash of color to the genre, Trailblazers successfully balances racing competition with strategy elements.
Single Player
50
A series of events that are often too short to give you time to strategize the painting of the track. AI difficulty is inconsistent.
Multiplayer
65
The game hopes to give all players a chance to win by scoring them in multiple categories, but it's all for naught when there's nobody online to play with. Local co-op makes the screen very cramped.
Performance
(Show PC Specs)
CPU: Intel Core i5-4670K @ 3.80 GHz
GPU: ASUS Radeon RX 580 8GB
RAM: 16GB DDR3
OS: Windows 7 Professional 64-bit

70
No major issues during gameplay, some bugs elsewhere. No keyboard/mouse support at all.
Overall
67
Trailblazers is a fun arcade racing game – from its varied modes to the solid presentation and unique gameplay, the formula for success is definitely there. However, a relatively high price, inconsistent AI and barren multiplayer prevent this title from reaching the podium. 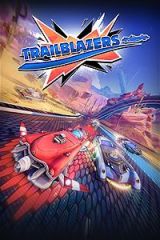 Our Review of Trailblazers
67%
Adequate
The Verdict:
"Arcade racing with a colorful twist"
Game Ranking
Trailblazers is ranked #1215 out of 1665 total reviewed games. It is ranked #100 out of 148 games reviewed in 2018.
1214. Octopath Traveler
Switch
1215. Trailblazers