A platforming adventure with a worthwhile twist

The 2D platformer genre has been quite hotly contested in the past few years. It offers a relatively low barrier to entry, so many new and seasoned developers often try their hand at creating these accessible experiences, often resorting to unique visual styles or gameplay quirks in hopes of standing out. Light Fall, from developers Bishop Games, has recently joined the fray. Though at first glance it evokes easy comparisons to other games of its ilk, an interesting core gameplay mechanic and good presentation prevent it from being entirely lost in the sea of platformers. 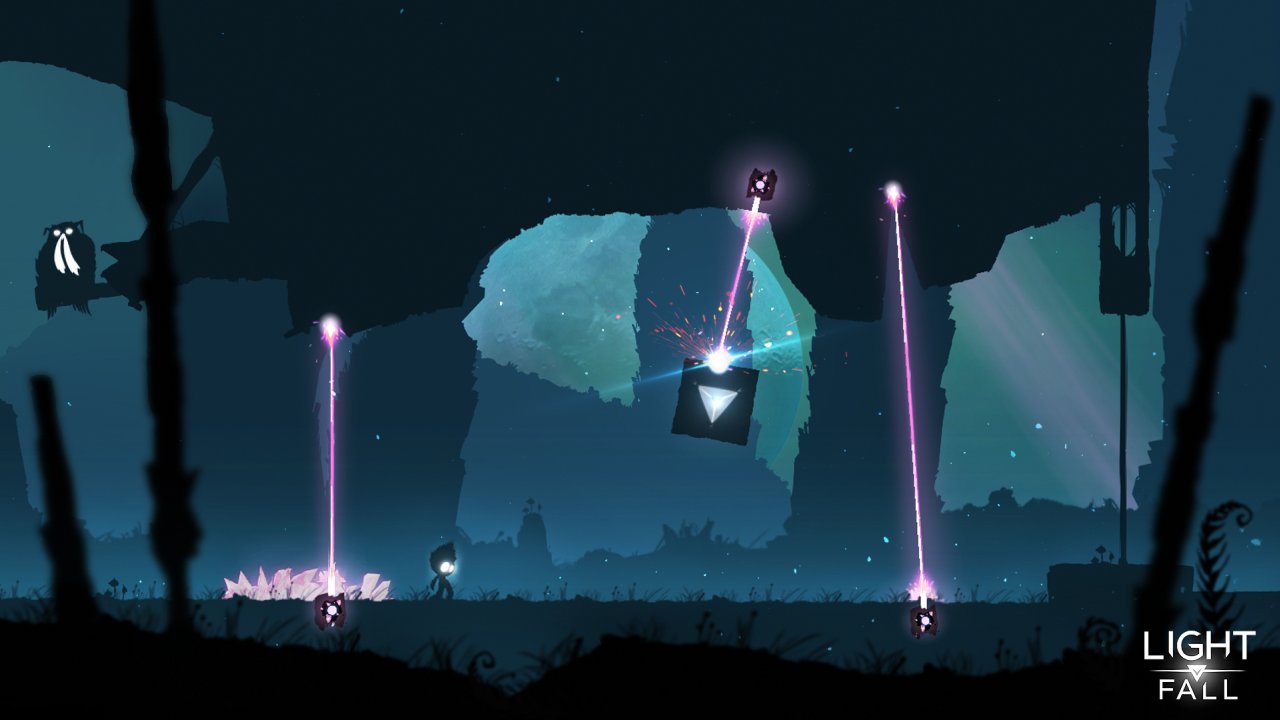 Light Fall takes players to the land of Numbra, which exists in its own corner of a magical world, and is always under the cover of night. A group of peoples named The Kamloops made their way to Numbra to escape the wars that ravaged their homelands and found peace. They worshipped several different celestial beings, but even that didn't stop a mysterious evil force from invading the land threatening to wipe them out. Players assume the role of a silent small hero, who we soon learn is one of the Gods of this land. With the rest of the Gods missing, your goal is to find and restore their powers before it is too late.

As the main character has no memory of who they are, and he does not speak, the game cleverly uses the third person perspective narration of a wise old owl named Stryx who accompanies the little celestial on his journey. The owl tells the tale, along with its own opinions, as the pair explore various different worlds and try to reach each of the missing Gods. It's a fairly straightforward story and doesn't feature many unexpected twists given the (somewhat overly) detailed setup. It works well enough to keep players interested, and the good voice acting of the wise owl helps carry the game along despite few other characters.

The game uses a visual design that can be compared to the likes of Limbo and Mark of the Ninja, with a nice style that sharply contrasts between light and darkness. Light Fall does feature bursts of color though, with the backgrounds offering a glimpse at a variety of environments. You'll visit swamps, forests, and caves that each have a distinct look. The soundtrack is unremarkable. 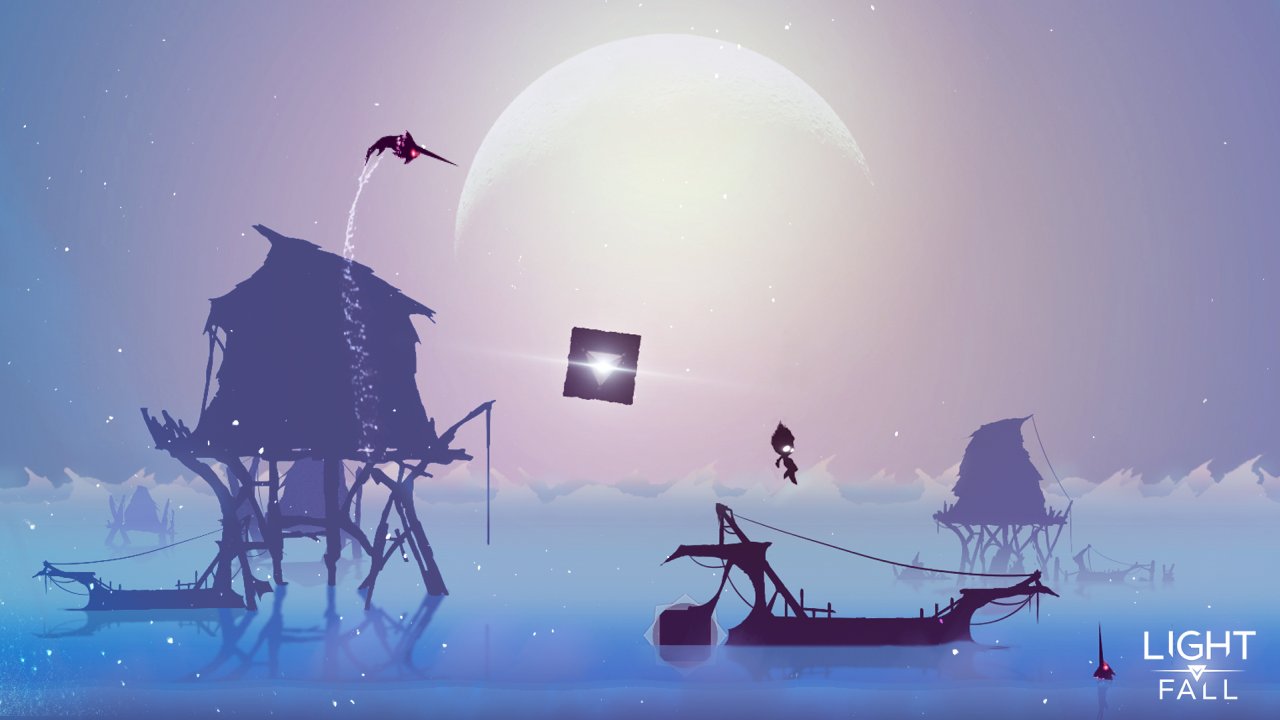 Those specific visual style comparisons are appropriate because this is indeed a 2D platformer. You'll be tasked with trekking across a number of levels and overcoming various environmental and enemy obstacles along the way. The basic controls are straightforward, with jump, sprint, and attack. The feel of the game is a bit floaty, though it rarely demands extreme precision. Instead, the game is much more focused on speed and momentum, and as such even includes a separate speedrun mode. Jumping your way across gaps and onto ledges (you automatically hang on to vertical walls) may remind some of Super Meat Boy and its ilk. The difficulty at times certainly will – Light Fall has bursts of rather challenging sections, and while checkpoints are not far behind, it can still grow to be rather frustrating, as the occasionally imprecise controls are put to the test. Towards the end in particular, the feats you're required to perform become rather more difficult compared to everything before, and the checkpoints grow too few in number.

With the focus on speed and skill, the game doesn’t really have time for puzzles, though that's not to say it doesn’t have a unique set of mechanics under its sleeve with the use of Shadow Cores. In most platformers, the best you can hope for is an ability to double or triple jump. But in Light Fall, tapping on jump while in the air actually spawns a small cube called a Shadow Core. This small platform appears right under your feet, letting you use it as a new jumping off point. You're limited to spawning four such cubes at a time before needing to touch the ground, but this mechanic is used extensively through the game in order to expand your platforming abilities. It's a unique approach that works, but even here the controls may let you down a bit. You'll frequently need to speed across huge gaps, spawning the cores as you go, which is fun when it works. But if you mistime a jump, or create the core too soon, or decide to stop, you'll likely just slide off the cube to your doom.

When not used as a platform, you can also spawn the Shadow Cores for environment manipulation. You can position the core on top of an interactive switch, and this lets you interact with the world – drive a boat, pull on chains, disarm traps, and so on. Or you place the cube on top of lasers to block them and provide safe passage. There is nothing groundbreaking here but the mechanics work sufficiently well during the moments of downtime when you're on solid ground. It never takes central stage away from platforming aspects, but serves as a decent change of pace and rounds-out the use of the Shadow Cores as a fully integrated gameplay mechanic. 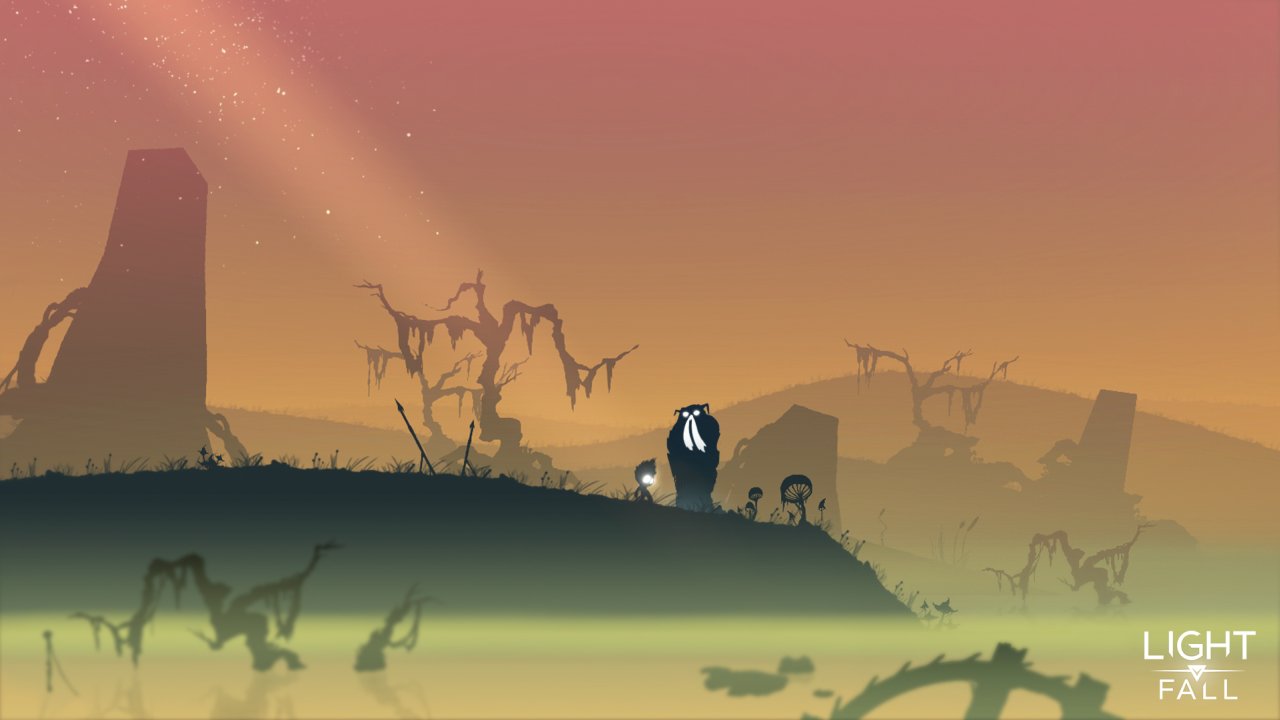 The game performs well on PC, though there are moments of some minor stuttering which sometimes compounds on top of the occasional controls frustrations. The game only supports a handful of resolutions, and tops out at 1080p, with no option for a 16:10 equivalent. Playing with a controller is obviously the recommended method for a game such as this.

Light Fall is a competent platformer that focuses on speed and utilizes the unique Shadow Cores to add some new mechanics to the gameplay. The controls and occasional stutter results in occasional moments of frustration, and the final hours provide an annoying spike in difficulty and lack of checkpoints. It's a nice looking game, though it uses a visual style that has been well-worn out in the genre at this point. If you're in the mood for a 2D platformer with some unique elements and can forgive some control and difficulty issues, Light Fall offers a worthwhile trek.

Our ratings for Light Fall on PC out of 100 (Ratings FAQ)
Presentation
75
The single voice actor does a good job to carry the narration on his own. The visual art design is nice, though not exactly original in its inspiration.
Gameplay
65
The use of Shadow Cores provides some much needed depth and variety to the typical 2D platforming. Sadly, some controls and difficulty balance issues hinder the journey.
Single Player
70
A series of levels that switch up the locales and the uses of the Shadow Cores. Speed run mode available.
Multiplayer
NR
None
Performance
(Show PC Specs)
CPU: Intel Core i5-4670K @ 3.80 GHz
GPU: ASUS Radeon RX 580 8GB
RAM: 16GB DDR3
OS: Windows 7 Professional 64-bit

80
Some minor occasional stutter, but otherwise runs without issue.
Overall
68
Though not without some minor issues, Light Fall manages to overcome its fairly typical visual design and platforming gameplay thanks to the unique Shadow Core mechanics and an engaging narrator. 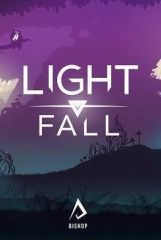