A typical light puzzle game experience with a nice soundtrack

Accessible yet occasionally challenging puzzle games have always been in demand, but ever more so during the explosion of smartphone gaming in recent years. Many such titles offer levels in small doses to keep players involved, and are easy to pick up and put down. They are also relatively quick to make and must run on some limited hardware, so porting them to PC is not very difficult. There's been plenty of mobile games co-released on PC in recent years, and Vandals is the latest such title. 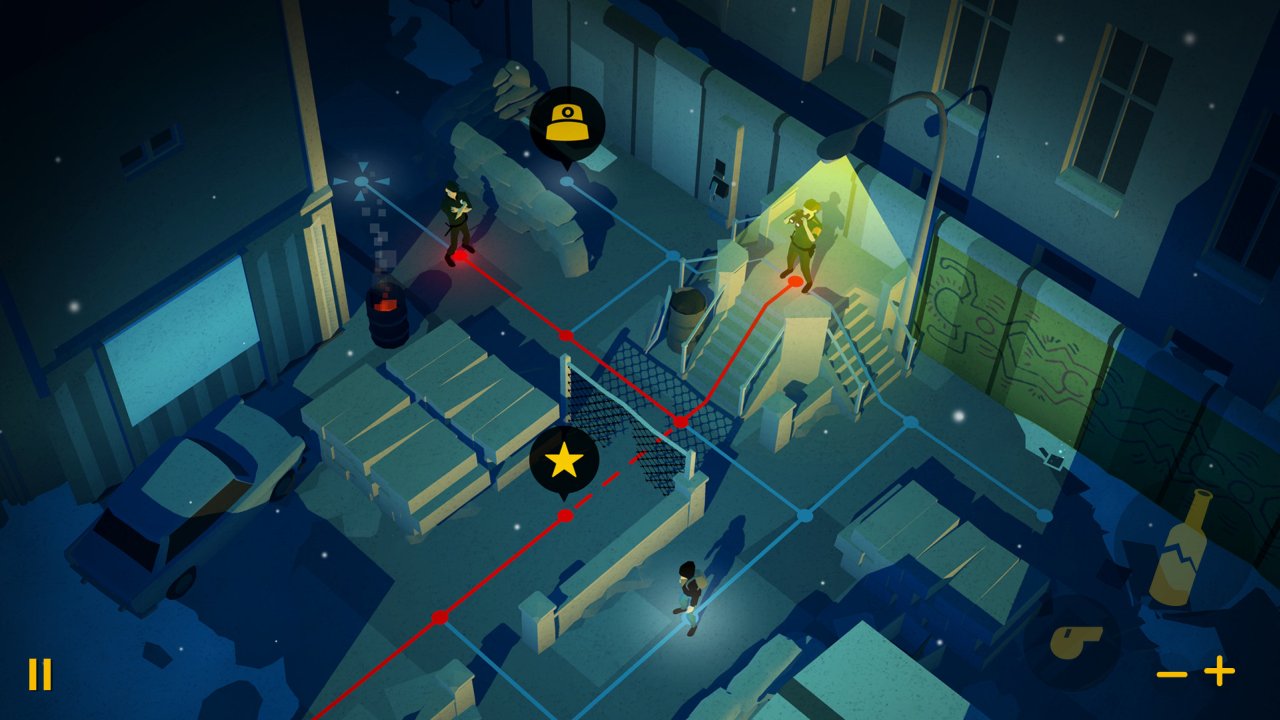 Vandals offers no real narrative thread at all, you're simply a shady guy that's looking to spray paint tag various locations across a number of cities. The game takes place in the 1970s-80s, though there's no real reason for it to span so many years. You'll get bits and pieces of information from some hidden optional photographs you pick up in some levels, but otherwise this is just a series of levels strung together. Similarly, the locations of New York, Tokyo, Paris, and others are only separated by the various specific mechanics they feature, rather than any drastic visual style changes or recognizable architecture.

This is a turn-based puzzle game on a grid, one that will be familiar to those who played Hitman GO, Lara Croft GO, or others in their ilk. You control the masked vandal one turn at a time, and the world moves with you. The objective of each level is to reach the target location, spray your tag, and leave via the exit. Spray painting itself is actually a minigame that lets you freely draw with a number of different colors, so you can either get creative or just leave an X. Your tags are saved in a gallery for later viewing. Of course, getting in and out from the level is where the challenge lies.

On the way to the objective, you'll be avoiding the careful gaze of police officers that, for some reason, are present in these dark streets and back alleys. Some are stationary, watching in a single direction, and others could be just sleeping on the job; later in the game, you'll run into patrolling officers that move along a set grid line, or those rotating in place. If you're spotted, it's not the end because, while they will give chase, as long as you stray at least 2 grid marks away you can keep running. You'll be caught, though, if they get alerted and you're next to them. 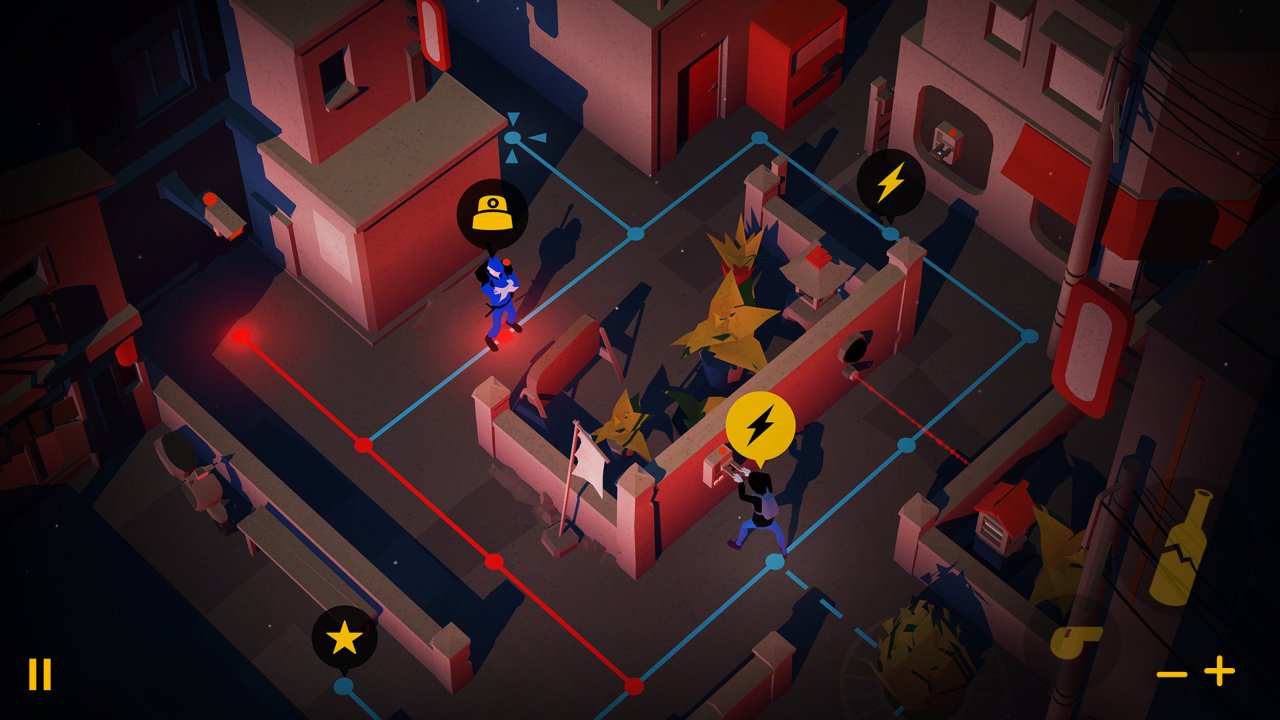 The guards are alerted by noise, which interestingly includes the act of spray painting itself. But creating noise is also key to some of the later puzzles, as guards will investigate the latest source of disturbance they hear and make their way there. Spray painting the objective creates a noise with a large sound radius, while whistling attracts only the nearby guards. Levels also feature bottles you can pick up and throw for a remote distraction.

To make your way across the level's grid, there could be extra opportunities and paths that police cannot follow. Sewers let you pop in and out at another location, fences let you sneak to new parts of the grid, and hiding in a bush allows you pass a turn. You can also cut fences to create new shortcuts (though that causes noise). All of these interactive elements are pre-set on each level, so most of your creativity will come from manipulating guards via noises made by whistling or tossing bottles. Things get more involved later, as you must time and execute all actions perfectly in order to succeed, as well as set up your own positioning, so it does become a bit of trial and error.

Vandals is not a particularly challenging puzzle game, but it ticks all the boxes. The above-mentioned mechanics get introduced gradually with each new location you unlock. Progress is linear though, so getting stuck on a level can get annoying. Each level offers the typical three stars that can be earned - remain undetected, pick up a bonus item, and complete the level within a turn limit. These aren't exactly original objectives for a puzzle game, but it works. If you earn enough stars in a city, you can also unlock a couple of optional bonus levels. Depending on your skill with puzzle games such as this, the whole thing can be beat in a couple of hours, and for the price tag that is decent value. There's nothing original in its design or implementation, but it comes together competently. 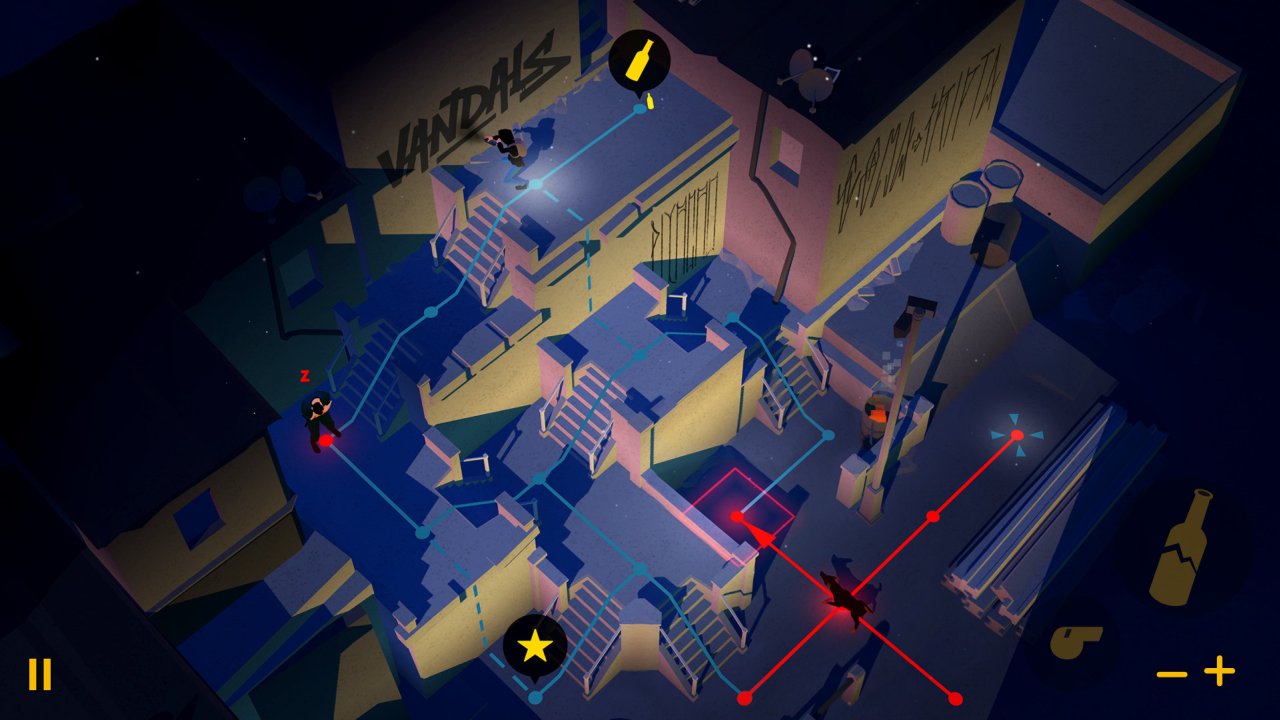 Since this is a game that quite obviously shares its Steam release with the mobile platforms, Vandals performs without any issues. Confusingly, the first thing the game asks you to do is type your name, but that took way too long to figure out as all you see is a flashing line on a wall - you might think it’s for spray painting. The developers were also not bothered to translate the game's Steam Achievements into English. There was one bug found - when using the keyboard ‘Esc’ key instead of the GUI, an irritating broken sound effects plays; otherwise, it's as polished as expected. The visuals are quite nice and have their own sense of style. It's less the barebones of Hitman GO and more the animated and nice visuals of Lara Croft GO. An honorable mention also goes to the great soundtrack, which features a variety of tunes that are quite nice to listen to.

Players should know exactly what they're getting with Vandals. It's a by-the-numbers puzzle game that accomplishes its goal of providing an entertaining and occasionally challenging few hours. If you've enjoyed games of similar style and yearn for more, Vandals should satisfy.

Our ratings for Vandals on PC out of 100 (Ratings FAQ)
Presentation
75
A nice soundtrack is accompanied by solid visuals, though there isn't much variety to the different cities.
Gameplay
70
Uses the typical grid-based stealth puzzle formula. It is well executed, but far from original.
Single Player
65
A standard campaign worth a few hours, with three typical objectives to be completed in each level.
Multiplayer
NR
None
Performance
(Show PC Specs)
CPU: Intel Core i5-4670K @ 3.80 GHz
GPU: ASUS Radeon RX 580 8GB
RAM: 16GB DDR3
OS: Windows 7 Professional 64-bit

NR
No issues aside from an audio bug
Overall
70
A straightforward puzzle game that uses an established formula without much deviation. Vandals should satisfy anyone looking for this certain type of gameplay, but aside from a nice soundtrack, it does little to stand out.