Me and my friends

Nintendo's first party support for the Switch in year one was staggering. Not only did it get two brand new entries in the company's biggest series, it also had a slew of off-beat games and a bizarre crossover that made it hard to put the system down for extended periods of time. Coming into the second year of the console, Nintendo isn't launching with anything nearly as big. Cue Kirby Star Allies, a game that does little to shake up the Kirby formula, but is filled to the brim with charm and general glee. 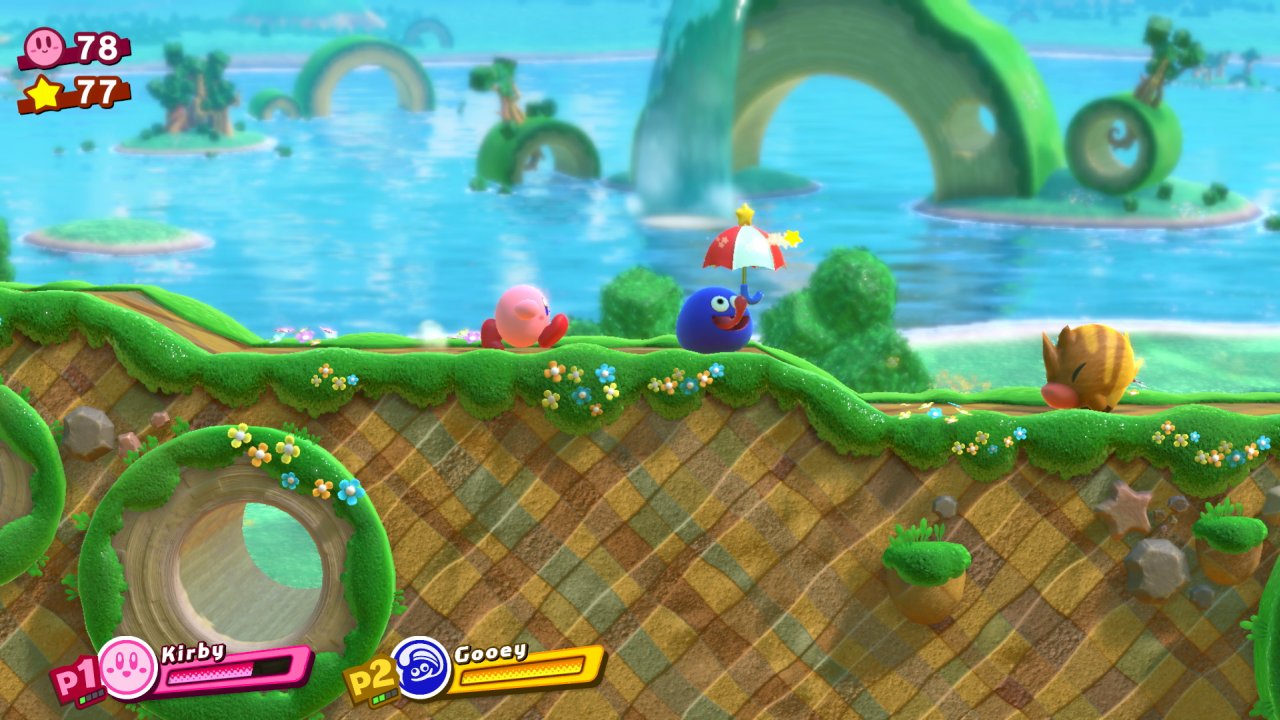 With how experimental developer Hal Laboratories is with Kirby, there are equally as many games that play things safe. Star Allies could quickly be summed up as such; safe. It at least continues in the tradition of introducing co-op play into Kirby's console outings and even does a fine job of showcasing the Switch's unique ability to have spontaneous co-op sessions, which certainly works to hide the meager level design flaws.

The main gist of Star Allies is that some new evil force from the planet Jambastion has entered Dreamland and is casting a kind of mind control spell over everyone. Even the colorful line of Kirby's foes isn't immune, meaning even King DeDeDe and Meta Knight are acting evil against their wills. Kirby has been given the gift of turning allies to his side, though, so this allows him to free his enemies from the clutches of the Jambastion scourge.

As such, the main gameplay hook is that Kirby can now have three companions with him at all times. This facilitates the co-op I mentioned above, but even in single-player, Kirby is constantly accompanied by three allies (or less, if they fall in combat). This is taken into account with puzzles that require multiple hands, segments that unfold on two paths simultaneously and even combat encounters that have foes spawning in from every angle.

While most of the allies Kirby can recruit are standard foes from his past adventures, there are also a number of “Dream Friends” available. While the base game only had Meta Knight, Bandana Waddle Dee and King DeDeDe, some free DLC has added Rick, Kine and Koo, Marx and Gooey. These allies have much better abilities than the standard enemies, though you'll need to unlock the Dream house in each world to use them. It really is a trip to see Kirby rocking alongside Marx, though. 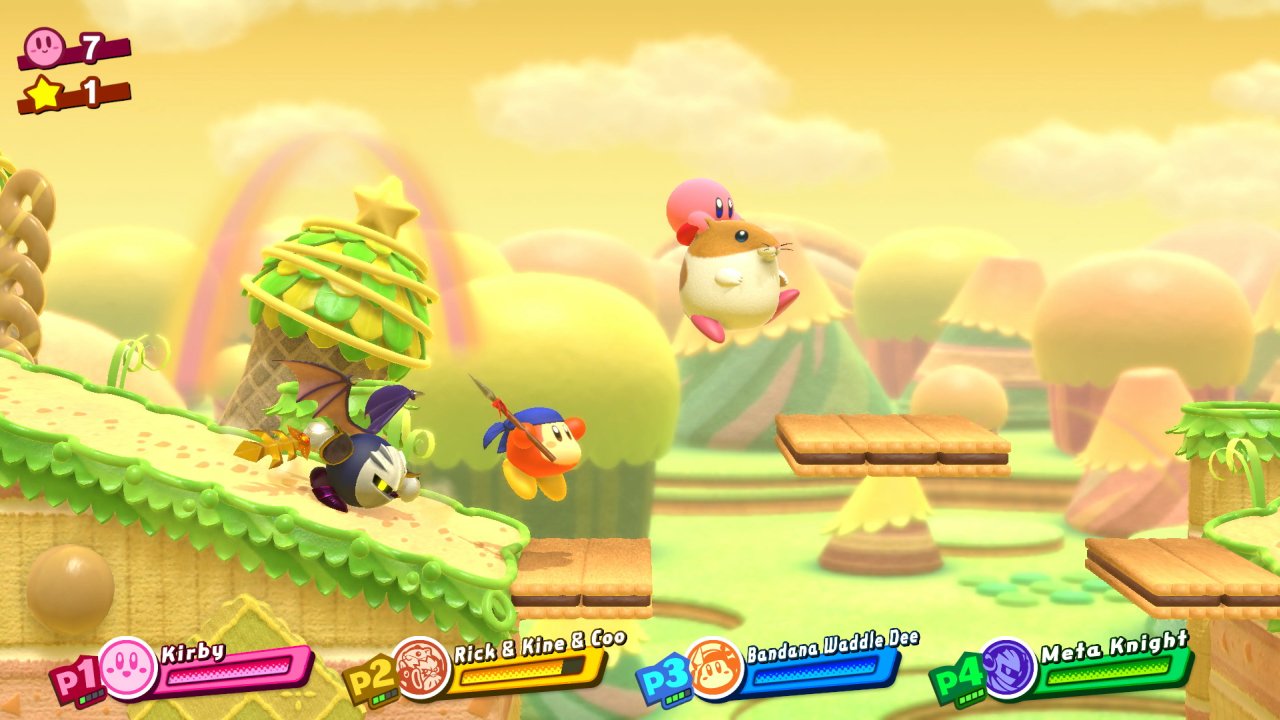 Even with these new companions, Star Allies plays remarkably similar to any number of past Kirby titles. This is a very straight forward, relaxed and easy adventure that fans of any skill level can breeze through. The only real addition is that Kirby can now mix and match his copy ability with other allies, making for things like a “Fire Cutter” or “Splash Hammer,” but this is more reminiscent of Kirby 64 than an entirely new angle. It also doesn't really come into play that often.

While some puzzles will be locked away and require you to have a particular set of abilities, having three companions you can steal abilities from kind of negates the planning that previous Kirby games exhibited. You can quickly change out any of your allies on the fly (even if another player is controlling them), so you won't ever need to think ahead for specific challenges.

Even if you somehow don't play with allies and decide to go solo, enemies respawn as soon as you walk away from an area. You don't even need to enter a door; just walk a few paces to the right or left and that particular enemy is back. This lets you easily collect whatever power-up you might need for a puzzle and sort of makes the game feel like it is on autopilot.

A lot of hidden puzzles will require the use of allies, so you can't always be a maverick. This means inevitably, you're going to run into segments that get trounced by the game's aggressive and skilled partner AI. The main enemies haven't really changed from past Kirby titles, but your allies almost play the game for you. Bringing real friends along can change this, since they won't immediately and omnisciently solve conundrums, but even that turns an easy game into a total breeze.

That isn't to say the game is without its moments, because there are a couple of neat ideas strewn about the adventure. At times, you'll need to have your allies join together to form area specific combinations that change up the gameplay. These take the form of a makeshift bridge to guide an NPC, a figurative train that lets you plow through everything, and a giant star that acts like a sidescrolling shooter. The game is constantly throwing these ideas every few levels, so you're rarely stuck doing the same thing. 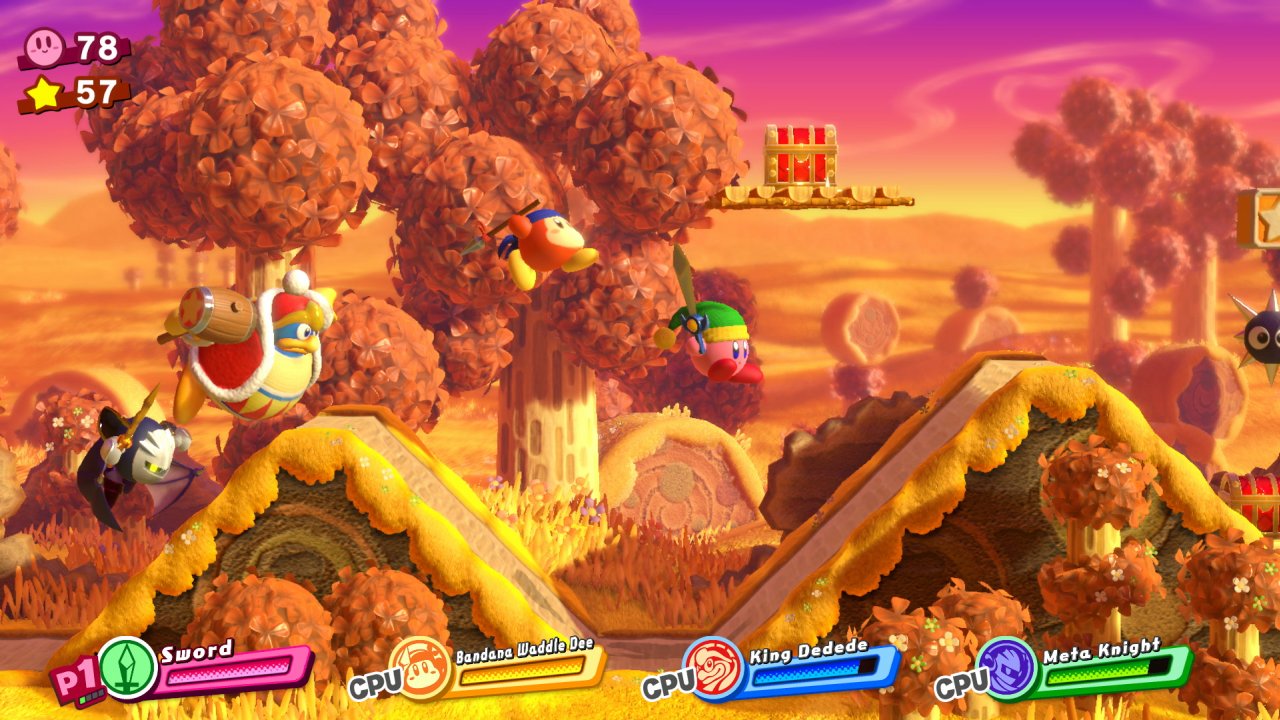 This is all complimented by a wonderful sense of visual flair. Star Allies shows that Nintendo really does know how to use an HD system, because this game looks incredible. Little touches like clouds kicking up as Kirby starts to run, or subtle animations for dancing, all bring Kirby's world to wonderful life. This is also the first game in the series to have fully rendered backgrounds and it brings a great sense of density to the various levels. Sadly, it comes at the cost of performance as the game is locked to 30 frames per second.

To say the gameplay can feel sluggish is an understatement. Kirby almost moves like he is trudging through soup. While the controls are generally responsive, sometimes your inputs are just completely ignored. This would be an issue if any real difficulty existed, but it mostly just comes off as being annoying and a little irritating since the AI just takes over for everything.

I'm also not sure how I feel about the length of the main adventure. I know Kirby games are generally short, but Star Allies is one of the shortest in a long time. This is a game with only four worlds and three of them have eight levels. You can zip through the entire shebang in five hours and that is with aggressively searching for hidden levels. I found everything on my first try, too, so those aren't even as deviously hidden as past titles.

The selection of mini-games that other Kirby titles have is also pared back a bit. Star Allies features two multiplayer competition games (Chop Champs and Star Slam Heroes), a Boss Rush mode (The Ultimate Choice) and a speed-run focused mini-campaign that removes Kirby. The latter two will occupy about three hours while the mini-games are mainly there for when you have friends over. You can play both Chop Champs and Star Slam Heroes solo, but the AI in this mode is pretty braindead. 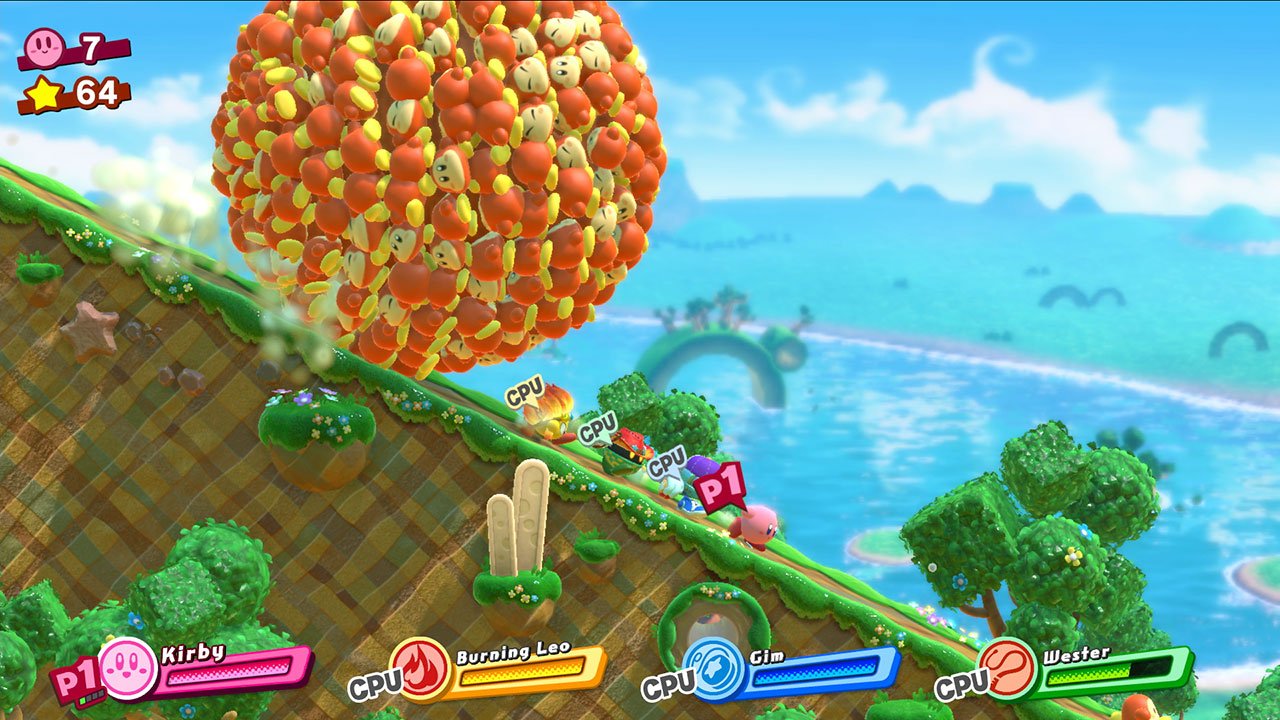 None of this is necessarily bad, but it feels very light considering Kirby's last two 3DS games were stuffed to the brim with extra modes. I spent a good deal of time in Triple Deluxe messing around with the Smash Bros-like multiplayer and trying to find all of the hidden exits. Even Return to Dreamland feels like a much larger game, thanks in part to it having twice the amount of single-player levels.

At least the campaign is fun, but that $60 price tag really stings. I know Kirby games aren't geared towards more skilled players like me, but I would have figured that I could get 20 solid hours out of this like in the past. Instead, the game is exceptionally light.

You can't take away the sense of charm that Kirby games exude, though, and Star Allies is definitely very cute and very much overjoyed with being a video game. Hal Laboratories has always found a way to make gaming inviting for those that are less skilled and even I have to admit how nice it is to play a game with my sister and not have her quit from frustration. She loves Kirby and I love the two of us laughing at Kirby's silly dance (which can now be done by Meta Knight, Marx and Gooey). It is just plain charming.

That might not excuse the non-existent difficulty for some people, but I'm willing to smile and accept some flaws for an experience that is harmless. Kirby Star Allies is like junk food, but less toxic to your well-being.

Our ratings for Kirby Star Allies on Switch out of 100 (Ratings FAQ)
Presentation
90
Star Allies has some beautiful graphics and very cute music that will keep you enticed in spite of the lack of challenge. This is just a great looking game, overall
Gameplay
70
Star Allies might introduce some AI companions, but the game is pretty much the same thing as past Kirby games. You'll find a short campaign with co-op support, a few bonus modes and some unlockable pictures. Otherwise, this is business as usual.
Single Player
60
One of the shortest Kirby games in a long time. The main story is over in mere hours and even the bonus modes are pretty light. The lack of difficulty (even in hidden levels) means that skilled players might find themselves done in no time.
Multiplayer
70
Drop-in/drop-out co-op in every mode and even allows for four player support. The bonus mini-games are multiplayer focused and can be a lot of fun with friends.
Performance
65
While Star Allies never falters in framerate, the game is locked to 30 FPS and feels a bit sluggish. Your inputs can sometimes drop, but the game is fairly leisurely and doesn't punish too often.
Overall
70
Star Allies is a respectable entry in the Kirby legacy, but it isn't likely to be held up as one of the better entries. Maybe with some more content, I'd be warmer to the whole experience, but I did have fun and definitely appreciate Nintendo making yet another co-op platformer I can enjoy with my family.