Batman: The Enemy Within Review

Despite being a few clues short of a riddle, this sequel has a punchline to die for

Telltale's first season of Batman was effective, circumventing expectations in regards to villains and taking the franchise in a slightly new direction. It included detective sequences, planned combat, feisty Catwoman interaction, troubled villains, and clever management of both Bruce Wayne and Batman in different situations. The sequel, Batman: The Enemy Within, has some of these elements albeit in lesser proportions across five sizable episodes. It has a bunch of new villains although it only uses two of them well. While the sequel doesn't capitalize on strengths from the first season, it does have a few good tricks up its sleeve. 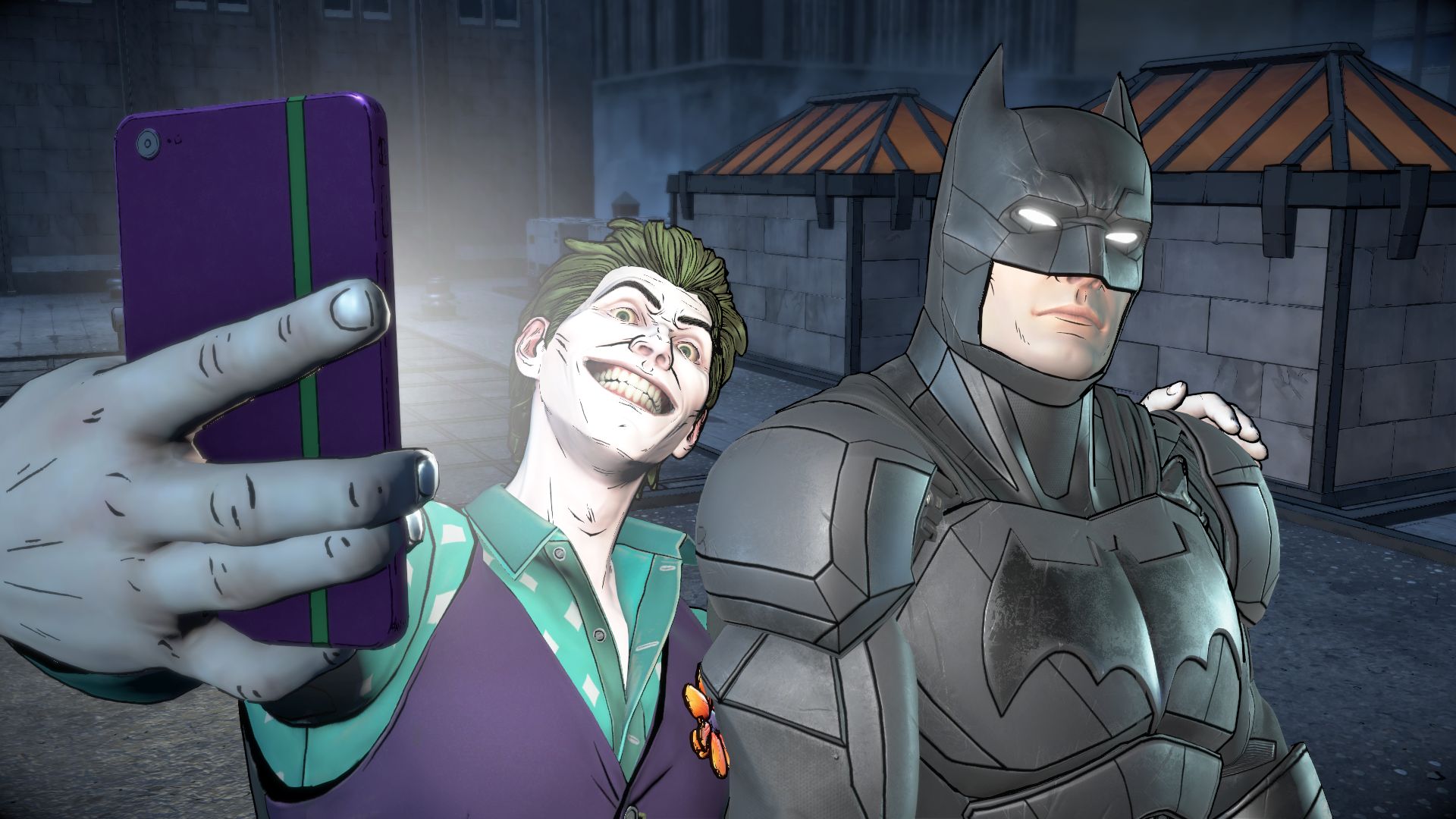 Batman is nothing without enemies, so it is fortunate that The Riddler has returned to Gotham to unleash puzzling havoc. He is the main villain in the first episode, but he is not the main adversary across the whole season. Despite his name, the few riddles that you need to solve can barely be called such; they are disappointing tasks that are completed by following basic instructions. After a risky confrontation at the end of the first episode, The Riddler is brushed aside—he exists mainly to introduce a new collection of foes.

The Pact is a group of villains and a big threat to Gotham. But their mission and precise makeup is unclear. After injuring himself, Batman’s only way to discover what they are up to is to go undercover as Bruce Wayne and become a member of the nefarious group.

The way inside comes from John Doe (aka Joker), a timid and strange member of the Pact that sees Bruce as a friend because they were in a mental asylum together. Much of the season involves Bruce acting as a sort of mentor, or as John puts it, "two threads in the same stitch." Due to John’s mental battles, he is prone to occasional outbursts but most of the time he is an ally. If Bruce lashes out aggressively, it excites the green-haired freak. There’s a funny scene where John laughs to replicate machine gun fire and another contemplative moment where he longs for the soothing hum of the lights in the asylum. Anthony Ingruber does a solid job of voicing both damaged man and lunatic. It takes four episodes before John transforms into the Joker, and while the shift is good, it puts pressure on the other adversaries to pick up the slack. 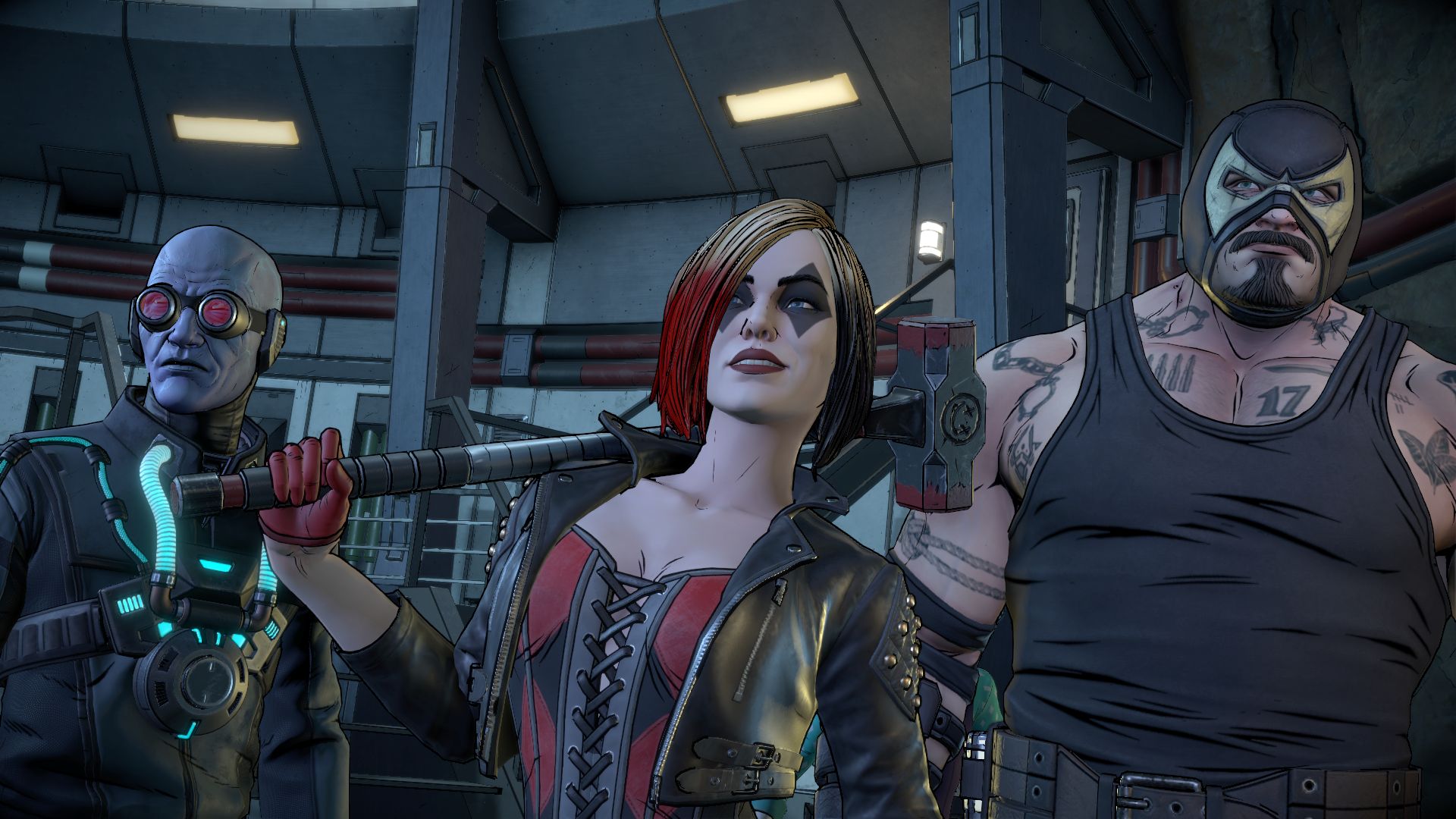 Not all members of the Pact pack a punch

The main enemies in the Pact are actually Harley Quinn, Bane, and Mr Freeze. Just one of these villains is a worthy antagonist for the world's greatest detective. Much like how the last season flipped the script, Harley Quinn behaves more like the Joker while John Doe skulks in the background. To her credit, Harley is intimidating, alluring, and unpredictable, making for some interesting conversations as Bruce tries to placate or impress. Laura Post uses her voice to elicit both charm and lunacy in the right proportions. In contrast, the other two villains are horribly weak and wasted; Bane is a boring brute and Mr Freeze is put on ice for much of the season.

After getting on good terms with the Pact, Bruce will have to do some unscrupulous things to maintain cover. This aspect doesn't get as dark or intense as it could have, although it is thematically appropriate to watch Bruce squirm as innocents suffer or perish. You can't break out the Batarang because the groups’ mysterious goal is more dangerous than all of them put together. Further, a clandestine group called the Agency has your cape in a vice and demands you keep playing the role of the mole. The Agency's leader, Amanda Waller of Suicide Squad fame, is happy to break the rules to stop the threat. Is Bats willing to do the same?

In order to maintain cover, allies are definitely recommended although optional given the spread of dialogue choices. Aside from questionable help from John Doe, Batman can get assistance from Agency members, Lucius Fox's daughter, Alfred, and Commissioner Gordon. Bats can push some of these characters away, maybe to protect them, or sit on the fence and play multiple sides until the time comes. None of the above can join you in the trenches—Bats needs somebody with nine lives when the going gets tough. 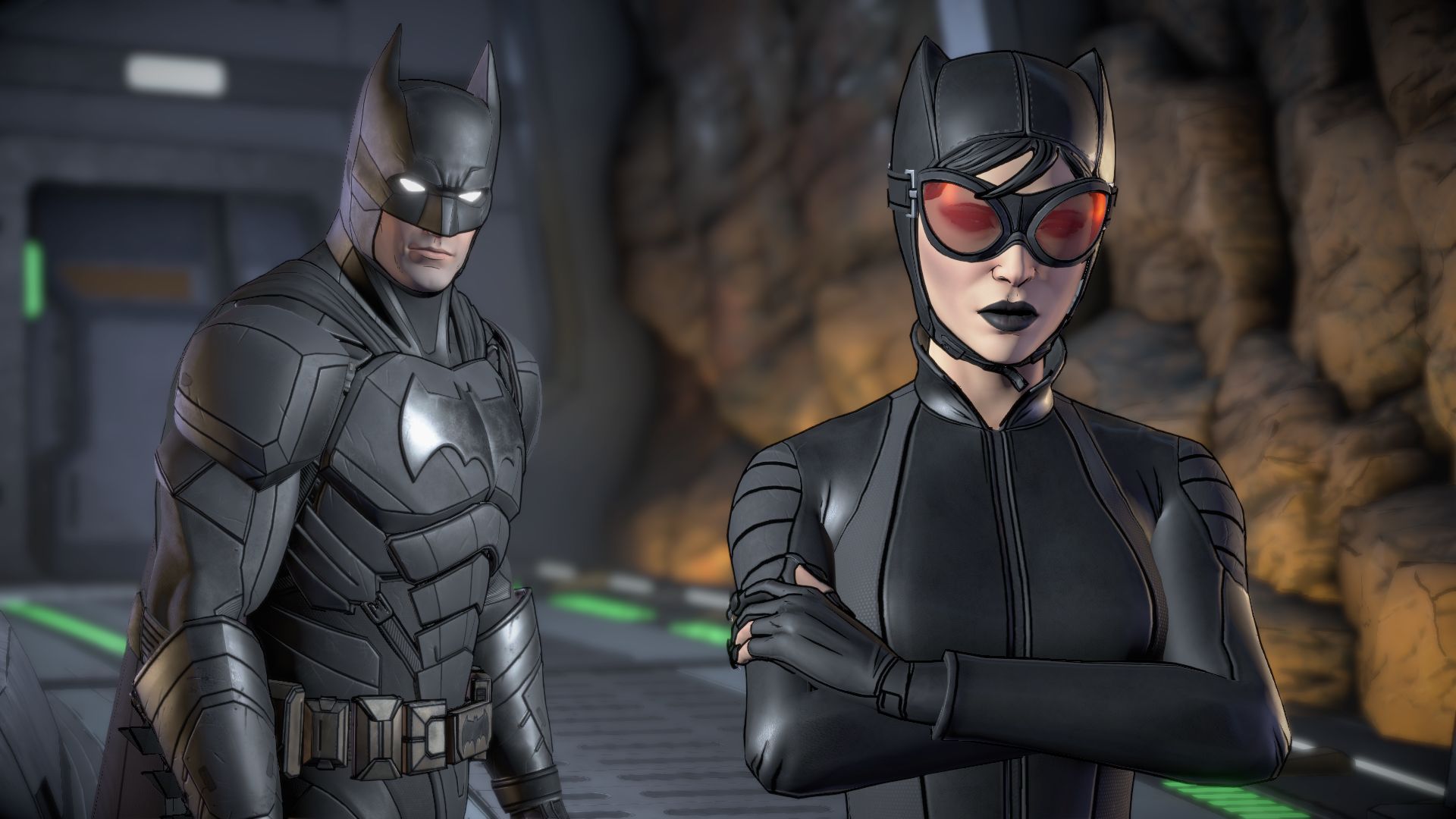 Not nearly enough Cat for this Bat

Catwoman joins the action after you join the Pact and the fights with her are among the best action pieces in the game. The interplay between the two suited vigilantes is electrifying; Laura Bailey excels again. Despite this, she's only in the game for around two episodes, or even less depending on choices. This loss of regular connection with Catwoman is criminal, and although her role is partly replaced by a good agency character, the interaction is just not the same.

Interacting with the environment is shallow this time around. World exploration and adventure puzzles have not been a strongpoint of Telltale’s recent games, but it is worse than the first season. There are only a handful of times when you actually take control. Environment variety is limited, with several areas returning from the first season and new locations being reused multiple times across the five episodes. But the real loss comes from the lack of detective sequences where you link different pieces of evidence together at a crime scene. They are shelved entirely after the first episode, even though many of the episodes had scenarios where they would have worked perfectly. Instead of expanding on this clever detective aspect, it's given negligible screen time and it makes the paltry interaction even more suffocating.

Combat might leave you breathless, with great motion capture and high intensity. There are some good prolonged fights, like the one in the middle of the fourth episode and the finale. But the action is a bit of a letdown because none of the sequences have a preparation element; unlike the first game, there is no phase where you sweep over the area and craft an action plan. Choices in combat happen on the fly and there is no corresponding ghosted outline to indicate what might happen when you try to blow up Bane or throw him; often the end result is just the same anyway and all that changes is the button pressed. 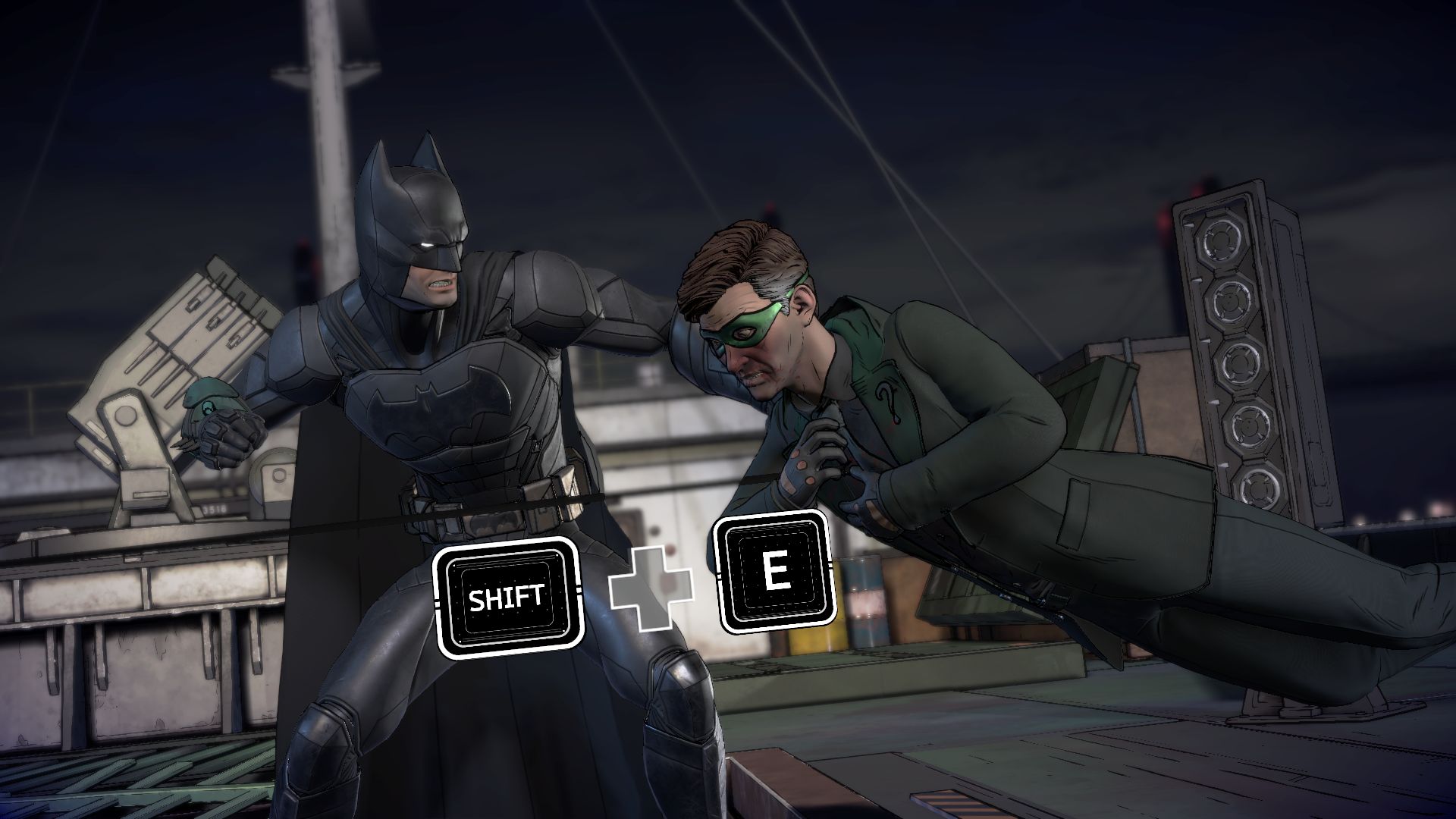 The Riddler is knocked out early

While the choices in combat require rapid thought, the big story moments usually give ample (or unlimited) time to decide on the outcome. This is good because the changes are quite substantial, altering entire scenes and conversations. Siding with the Police might see Catwoman busted and bruised at Bruce’s manor; warning her will lead to a friendly rooftop scuffle. Telling John to be himself will see Bruce hilariously pretending to be Harley; but convincing John to manipulate others will result in an impromptu Rorschach test. And telling Harley something important will mean Batman infiltrates an underground base alone, instead of Bruce with his new gang. Even finding out slices of information via other dialogue options builds layers into the narrative.

Telltale saved the biggest and best change for the final episode, when Joker becomes either a villain or a vigilante, depending on whether you trust him or not. Rather than modifying a few scenes, it changes almost the entire episode with completely different locations and events. As a vigilante, you'll fight alongside Joker and try to keep him on a leash so he doesn't kill people—until he inevitably cracks. As a foe, you will be treated to a first-rate Joker experience as you navigate a freaky funhouse of friends in peril. Fighting with or against the Joker is funny because he has a tendency to enjoy being hurt. Although the season is worth replaying anyway, seeing both Jokers will make it even more compelling to go back and get a little batty with choices. 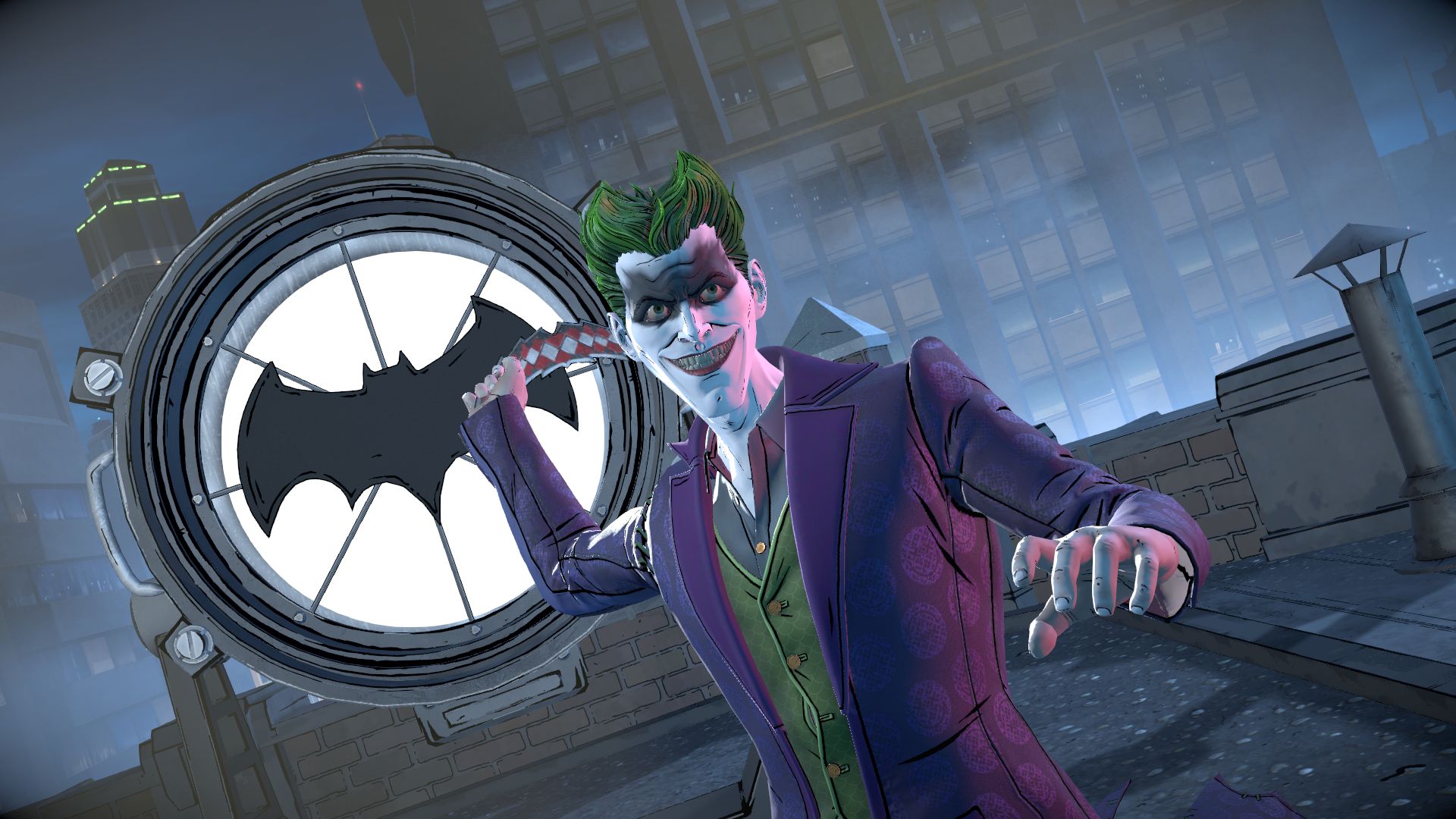 Batman: The Enemy Within pulls a trump card from the pack in the final hour, and it makes for a sequel that most fans should enjoy. Both Harley and Joker are interesting villains that tread a fine line between crazy and insane. Choices have significant impact on events, none more notable than the excellent final episode. Even the combat sequences are generally fun. But the sequel is not all good news because it fails to build on the strengths of the first season. Catwoman is awesome but does not appear nearly enough across the five episodes. Secondary villains are either misused or underused. And, alongside the worthless interaction, the detective sequences have been shelved. It seems a sure bet that another season is coming, based on how many story threads remain untied. Hopefully Telltale can stitch together the strengths of both seasons the next time Bats meets a new friend.

Our ratings for Batman: The Enemy Within on PC out of 100 (Ratings FAQ)
Presentation
73
It looks better than the first season due to improved lighting and shadows, and it features some nice voice work for Harley, Catwoman, and Joker. Nice combat motion capture. There are not enough different environments.
Gameplay
50
Fights are generally well directed and long. The rest of the interaction is bad to poor.
Single Player
75
Harley is a strong antagonist and we get to see Joker unravel from up close. Dialogue is generally good with adequate options. Some villains and allies are underused across the 9 hour runtime. Choices do lead to interesting outcomes. The final episode is great but not all events are concluded.
Multiplayer
NR
None
Performance
(Show PC Specs)
CPU: Intel i5 3570k
GPU: XFX RX 480 GTR Black 8GB
RAM: 16GB DDR3
OS: Windows 10 Pro 64-bit

74
There were a few stutters following scenes transitions and camera angle changes, and these resulted in some lip syncing problems. No problems with saves or crashes, but there was one infinite loading bug.
Overall
71
Despite interesting choices that alter events, Batman: The Enemy Within is not quite a stellar experience. Watching Joker come alive as he interacts with Bruce is alluring and the finale is impressive, but the second season squanders the best features of the original season and has the same problems as Telltale’s other recent efforts.

All videos for Batman: The Enemy Within (5)
Advertisement ▼