The roguelike subgenre has become a bit overdone in the indie scene recently. After the success of The Binding of Isaac, it seems a bunch of developers got the bright idea to try their hand at making lightning strike twice. Most games fail to understand what made Isaac so good and, sadly, Bit Dungeon+ is one of those. Things start decent enough, but after multiple hours of play with barely any tangible progress, I’m not quite sure what the point of Bit Dungeon+ is. 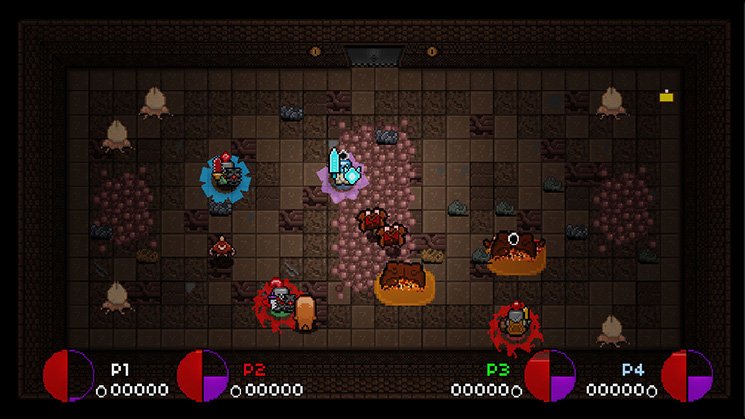 With absolutely no introduction, Bit Dungeon+ throws you into the fray with a single tutorial room. You’ll see the controls plastered on the screen and a mini-map in the upper right hand side that shows you’ll be progressing through some labyrinth, Zelda style. From there, you’ll kill enemies, collect loot and repeat that simple process until you reach a boss fight and continue on.

While that might be simplifying the game a bit, there really isn’t much depth to Bit Dungeon+. Everything you need to know about how this game plays can be learned in roughly 10 minutes from just tinkering about. The visuals give you the impression that this might be some roguelike take on Link to the Past, but the nifty pixel art is betrayed by a game that is far too simple for the brutality the subgenre typically dances in.

The level design is the biggest flaw that Bit Dungeon+ has. While you’ll encounter different themes while making progress, every single room is essentially the same thing. There aren’t bridges, empty pits or even lava traps to deal with; you’ll just walk through various rectangular rooms that have no functional difference between them. Even the “hidden” store in each level can only be encountered once at complete random, meaning you can’t meaningfully plan out when to spend your currency (gained by defeating enemies).

Your basic attack in Bit Dungeon+ is a simple swipe. Regardless of what weapon you happen upon (swords, axes, daggers or spears); they all attack in this incredibly limited swing that necessitates you getting within pixels of your enemies. While that could have worked if the enemy pool was interesting, even they follow a similar move set.

As far as melee foes are concerned, they can only attack you in the same manner. Get up close to an enemy and they will all shoot the same triangle-like beam to deal damage. While the visual designs of enemies are different, their functionality is not. There are some magic users that shoot slow moving orbs and even archers with arrows, but those foes are devoid of melee attacks and fail to show a shred of self-preservation as you hack away at them. 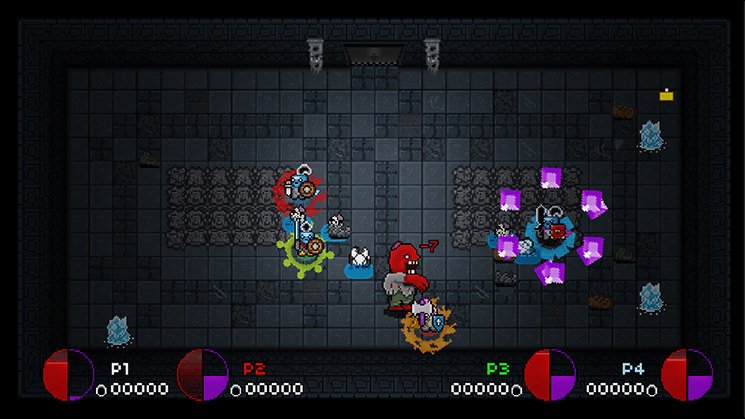 As for “advanced” attacks, you will eventually stumble upon an “aura” attack that takes the form of some element (Lightning, Water, Ice or Fire), but even that is incredibly basic. A magic spell creates a barrier around you that will damage enemies upon collision, while the other just shoots beams out in each cardinal direction. It tends to be the easiest way to damage an enemy, but mostly because you won’t be receiving unnecessary damage while trying to attack.

At least the game tries to stop you from becoming too reliant on either form of attack with a mana meter. Using any form of magic will drain this meter, which requires you to go back to melee attacking when depleted. This system could be interesting, but it becomes completely undone by the lackluster level design, which features a flaw that I’m sure wasn’t intended by the developers.

When backtracking to previously cleared rooms, you’ll encounter rats munching on the corpses of your defeated foes and sometimes ghostly apparitions. Killing these ghosts will drop health or mana potions and can be repeated ad infinitum until you’re topped off. To make matters worse, the rats will also infinitely respawn and will occasionally drop currency that can be used in-game, meaning you can basically break the game at your earliest convenience just by farming for 20 minutes.

I understand the idea behind the rats (which is to provide a challenge for backtracking instead of having empty rooms), but the execution of the idea completely betrays the intent behind the roguelike genre. This is supposed to be a game that demands mastery of its systems, but Bit Dungeon+ feels like a quickly thrown together idea based on the success of similar games.

But why would you even need to backtrack? Well, sometimes there are branching paths in rooms that might lead to stat boost upgrades. When you start Bit Dungeon+, you’ll have a solid zero in every category (which contains attack, defense, critical attack, mana, etc) and by clearing some rooms, permanent upgrade orbs may drop. Through getting these, you can then buff your character to better prepare yourself for later levels, though the only skill that seems useful is attack. 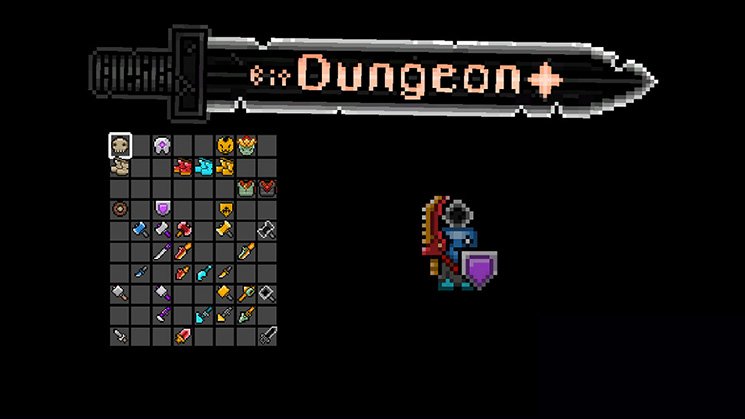 Since you have access to a shield that will absorb 100% of the damage thrown at it (even if it has a cooldown), upping your defense is only meaningful in later levels. Getting your attack up as quickly as possible will let you blow through enemies and clear out rooms a lot quicker, which then means you won’t waste time exploring the endless samey rooms.

This is all fine and dandy, but there is a serious problem that plagues Bit Dungeon+ when it comes to these upgrades. Each time you finish a run through the game (either by killing the last boss or dying), you’ll unlock runes that start you off with a stat boost. These can offer increases in each category from the start, but they then conflict with the upgrades you’ll find in your playthrough.

For instance, when selecting the “Damage +++” rune, your attack becomes locked to +15 for the entire playthrough. Regardless of any attack orbs you get, even if you somehow find five in a single area, defeating the boss of that area will reset your attack to +15. This becomes a serious problem as later levels will demand you have an attack stat at +60 (which is now impossible to obtain).

You also can’t opt out of selecting a rune once you’ve unlocked some, meaning if the only runes you currently have are attack ones, you’re kind of screwed for a bit. When I managed to get something different, I tended to go with “Critical Attack+” because grabbing some weapons can lower your Critical stat and the rune will reset it after a boss. This then has the effect of breaking the game in reverse, which I’m pretty sure was not the intention.

For as much as you can break the game, though, the final area is just painfully difficult. I can fly through the first five areas with relative ease, but the game then becomes a nightmare as you trek to the final boss. To this end, after 15 hours of playtime, I still haven’t beaten the game. While I don’t like reviewing games before actually seeing the conclusion, I had to force myself to even get that much game time in the first place. I would have given up long before hitting the 10 hour mark if I wasn’t trying to review this. 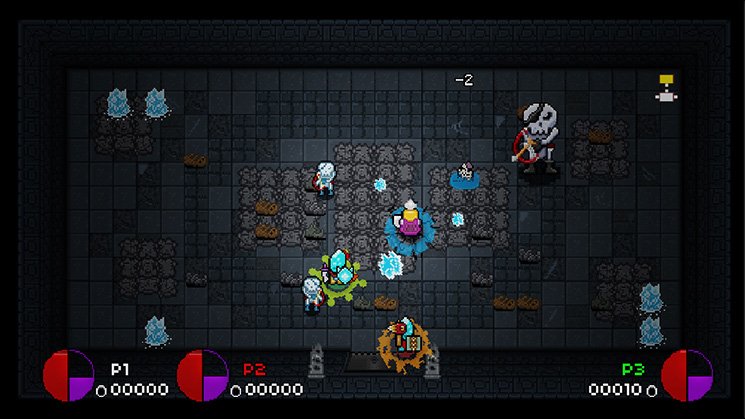 This is all without even mentioning the other game modes that Bit Dungeon+ offers. Along with a time attack style take on the game (called Babel’s Tower) and a boss rush mode, you’ll also find four player co-op support for every mode. This mode allows for split joy-con play, so getting co-op going literally anywhere is a nice bonus. While co-op works without a hitch, the other modes have their problems.

Boss rush is pointless since the bosses in this game pose no threat (and are just as functionally identical as the main enemies). Babel’s Tower, though, suffers from a flaw in the level generator that fails to include doors on the fourth level. Every single run I had where I made it to level four, I could only access a shop before being dumped out into the same room with no exit.

The twist of that mode where you gamble time to buy items is neat, but since you can’t actually complete it, it becomes an exercise in futility. That kind of typifies the entire experience of Bit Dungeon+, really. For as charming as the pixel art might be or how the basic idea has proven to work for other developers, something is just off in this whole package.

At least the game is fairly cheap, costing only $8.99, but you can also nab it for cheaper on any other platform. The novelty of having it anywhere won’t distract from how basic the game is, so I can’t say I’d recommend the Switch port over another version. I also have to point out how the game will slow to a crawl if you put your Switch into suspend mode and then resume, though that can be fixed by doing a hard reboot of your system.

For as harsh as I sound about Bit Dungeon+, the main problem the game has is just how mediocre it is. There is a decent idea at the core of this experience and while some flaws rear their ugly heads, Bit Dungeon+ isn’t the worst thing around. It mainly exists and acts as a time waster with a neat art style. At least the game doesn’t demand a huge investment for you to try, though you’d be better off looking at any other roguelike game on the Switch.

Our ratings for Bit Dungeon Plus on Switch out of 100 (Ratings FAQ)
Presentation
70
The only solid aspect of Bit Dungeon+, both the pixel art and soundtrack are pretty good. The sprites are cute and the animations are smooth. Sound effects can be a bit dull, though.
Gameplay
30
This is where Bit Dungeon+ suffers the most. The level generator is boring, the bonus modes tend to not work and overlooked flaws in game design combine to make an experience that is just plain forgettable. It isn’t offensive, but it also isn’t worth your time.
Single Player
35
While you can technically finish this game in 40 minutes, you’ll be hard pressed to even reach the final boss with how lackluster the game mechanics are. In that case, you’ll spend a lot of time with Bit Dungeon+, but it won’t feel very rewarding.
Multiplayer
60
At least co-op works without a hitch. It doesn’t greatly improve the experience, but bringing along friends in Bit Dungeon+ is easy to setup.
Performance
45
For some odd reason, putting your Switch into suspend will see the performance drop dramatically. From a cold boot, the game runs at 60 FPS and doesn’t falter, but suspending your Switch will see it fluctuate all over the place.
Overall
45
Bit Dungeon Plus isn't the worst game around, but it doesn't do anything particularly noteworthy with its mechanics. If you're just dying for a co-op roguelike, I suppose this will do, but you can find a lot of better examples elsewhere. 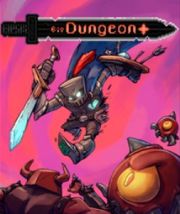