Aliens vs Predator is a shining example of a single player game that has not evolved as the gaming world has. Despite advances in storytelling and pacing throughout the industry this game seems to blatantly ignore all with dire results. Split into three short campaigns the single player brings forth repetition, nonsensical design and imbalances in one package. You will be transposing the exact same levels up to three times by the time you finish the Predator campaign with very little changes to their design. Fortunately the graphics engine does an impressive job at rendering the large levels and the different species within them. Some of the multiplayer modes do work quite well when each species is allowed to flourish. Single player lets you play as a Predator and an Alien but it seems to focus more on the Marine.
The Marine campaign is almost twice as long as the other species campaigns, but at 3 hours it still manages to get repetitive and insultingly generic. At first the good use of sound and the motion tracking beeps will have you living the tense life of a Colonial Marine straight from the movies. Things go downhill steadily however as some AI Aliens start having trouble navigating close quarters. The Alien animation is good, but it’s still not quite as smooth as the universe demands. One thing that will worry you quite quickly is that apart from Corporal “Tequila” the rest of the Marines will repeat boring pieces of dialogue like they were part parrot. “Don’t let your guard down” says a Marine as he stands stationary against an oncoming wave Xenomorphs. 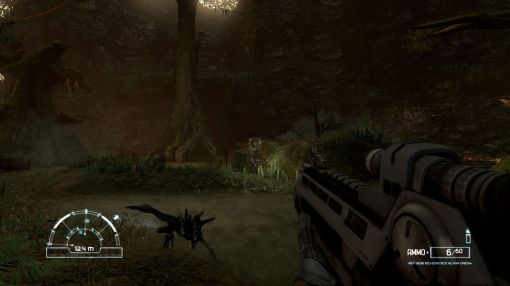 Attack of the swamp Aliens! The sniper rifle was a bad choice

The Aliens themselves are only a challenge in as far as acquiring their changing position during the single player. The motion sensor will guide you to these wall hugging critters as they descend from every angle. Running backwards through chokepoints will make your life much easier and at times trivial. Later in the game you face “combat androids” which almost completely ruins the whole experience by being harder to kill than Aliens with pinpoint accuracy even without a head. It’s interesting that these guys have more personality than the marines although they are still as brain dead.
The Marine missions start getting quite repetitive during the later stages, and become a chore to get through. The end boss battle brings into perspective the lacklustre effort to engage with the player on any intelligent level. There are no interesting puzzles, no setting up defensive turrets and only some movie like sections featuring glimpses of an ominous Predator. Although there are some scenes thinly analogous to the movies there is so much potential wasted. Fortunately Tequila, a Marine Corporal directing you, isn’t a horrible character. Even excluding the potential, the basic gameplay design just falls flat throughout. Good use of music helps keep the tension high but everything is just so unappealing. Next up I was begging for something solid in the Alien campaign.
To my dismay the Alien campaign wasn’t really that much better. If you manage to get into the rather messy control scheme, transitioning up walls and through vents, then you’ll probably enjoy it slightly more than playing as the Marine. With auto transition on you can scale walls without pressing buttons but in cramped areas this means you’ll ascend walls you never intended to and get caught around yourself. I was switching this feature on and off just to suit the nature of the level design. As a Xenomorph you are very vulnerable from Marine weapons and frontal attacks are not terribly effective. So you’ll be playing a stealth role, relying on a bit of patience to execute some simple plans. 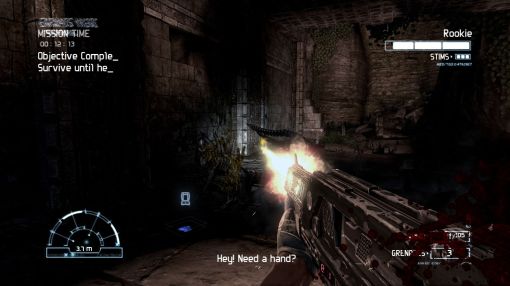 They mostly come out at night, mostly

The most effective way to take down a group of dumb Marines was to pick off solitary characters slowly by pouncing at them then performing an instant kill move. These moves are quite visceral but leave you completely vulnerable for a few painful seconds. Doing this in the open will just get you killed mid combat. Although the Alien hiss is meant to lure Marines it never functioned as advertised and I just exploited the broken AI system. At one stage instead of finishing off a group I just used my Alien speed to bypass them all and exit the area. “Don’t let your guard down” I heard as I left through vent. Something is wrong with the combat if provides no satisfaction on its own. The Alien campaign is quite short, it won’t last you more than 2 hours and thankfully not any longer. It does use the exact same levels you saw in the Marine campaign but you’ll be completing them in reverse or with a slightly different layout.
1234Next