Unfortunately at the time of writing the current multiplayer setup on the PC is depressing given the fun nature of some of the modes. Two weeks after launch there are barely working “beta” dedicated servers through a patch but only for non ranked games. Player counts across all the servers is fairly low and there are bugs like only one team existing in a two team match or disconnections during loading. Connection issues during matches reduce player numbers and pings can be erratic. Had the game shipped with a good dedicated server setup it may have held onto more players. Dedicated servers do help bring more players into games by finding games faster and allowing you to see what people are playing. If you suffer a connection problem you’ll be asked to start the server search again.
Ranked servers let you level up and unlock skins; these are purely cosmetic so there is no chance for imbalances for high ranked players. Matchmaking for ranked games can take a few minutes to find a server, if it does at all. Luckily the connection screen tells you the progress of the search, so you can give up early if there is no change and go play some player matches. The new patch also thankfully does not dump you back to the search menu again and lets you keep playing. There really is no reason to use the inferior matchmaking despite the ranking system. 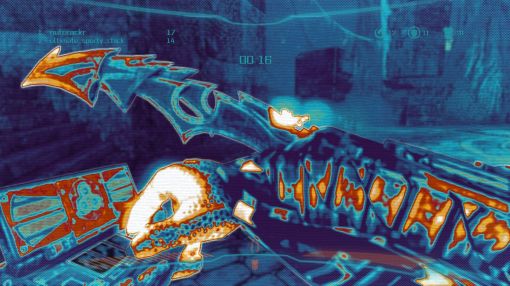 Damnit how do I cancel this self destruct sequence!

The single player campaign in Aliens vs Predator isn’t good; it’s repetitive, dull and ignores many recent success stories in the first person shooter genre. The multiplayer is the only reason I’d recommend this game, and I would not without the inclusion of dedicated servers through a recent patch. Unfortunately as of right now the multiplayer side is unfinished, the dedicated servers are barely functional and in some cases the increased player numbers impact negatively on the online experience. There really isn’t enough quality in the huge meld of modes and maps to make it worth your while.
The game does impress visually, Rebellion have done a good job with the animation and design of each of the species. The levels are large and load very quickly with good detail. If you are a big Alien or Predator fan then you will get some enjoyment out of the best looking depiction yet. Shooter fans will more than likely be disappointed with the whole package. Franchise fans will continue to dream of something that doesn’t feel like it was released months before it should have been.
Prev1234
Our ratings for Aliens vs Predator on PC out of 100 (Ratings FAQ)
Presentation
75
Levels are large with good detail. Individual species look great up close and there is plenty of gore on display. Generic voice over and poor dialogue lowers the overall presentation
Gameplay
67
Basic gameplay elements of melee and long range fighting into some pre-arranged stealth and action sequences that don’t always play out well. Alien controls are an obstacle.
Single Player
54
Repetitive, boring, generic, incomplete with baffling design decisions. Seven hours of a pretty weak tutorial like experience that will not have you going back for more, ever.
Multiplayer
72
When you witness each species go into their element there is great fun to be had. It combines stealth, patience and tactics together into something entertaining but unfortunately doesn’t do enough. Dedicated server system is faulty and matchmaking is poor
Performance
(Show PC Specs)
CPU: AMD Phenom II 955 @ 3.2GHz
GPU: Sapphire Radeon HD 5850 1GB
RAM: 4GB DDR3
OS: Windows 7 Ultimate 64-bit

74
The game runs well and the large levels load extremely quickly. There are problems with dedicated servers and the awful matchmaking system.
Overall
64
Aliens vs Predator doesn’t do enough to make it worth your time. The single player is largely unappealing and repetitive despite some good sections and nice graphics. The multiplayer is better and at times impressive but flawed and feels incomplete.