Predator hunt becomes, even with low player counts, the ultimate hunting experience. Patience and tactics develop slowly as you make your moves bringing great reward. Species Deathmatch lets each of the species thrive more than any of the other modes. Grouping together as Aliens or Marines works naturally and in some cases the experience becomes quite surreal. Sadly mixed species deteriorates into a real mess with no consistency. Survivor is a horde game mode against AI Aliens, although only two maps are available for most players. Infestation ultimately proves to be an exercise in futility with only a handful of players. 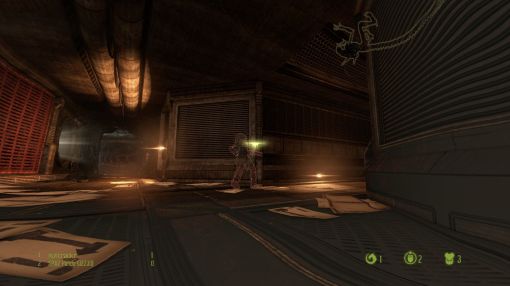 Infestation with many players starts slowly with the selected Alien struggling to make an impact on the Marines and then it builds, the last handful of kills are over quickly. It doesn’t really seem to come into its own aside from the stage when there are a few Aliens attacking the group from all sides. There isn’t much strategy involved as a Marine and the mode loses its lustre after only a few rounds. Infestation is probably a good example of what the game does poorly throughout the multiplayer experience – good ideas that don’t quite live up to expectations.
The idiosyncrasies of each class will become very clear when you play a few multiplayer games from each perspective. Predators rely on stealth and sometimes lack of movement to surprise their enemies, utilising both heat and Alien vision to observe their prey. You’ll need to acquire weapons before you attack by leaping across the level for pickups. Use them wisely as your laser will give away your position when in attack mode.
Marines are full on assault units who can deal out massive damage but are very vulnerable to melee attacks. Their motion sensor plays a large part of the tactics used for and against them. Running away as a Marine is a bad idea when Aliens are super quick. As Predator you can simply lie in wait and attack Marines when their back is turned. You can even disorientate the marines by running around above them as they watch their motion sensor go crazy. Marines will stick close together in species Deathmatch because their chance of survival increases dramatically.

Aliens are very fast and can do hit and run attacks as well as lying in wait for a jump attacks on walls. Multiple Xenomorphs are effective for high speed massacres by coordinating a simultaneous assault on a group of enemies. Because Alien health recharges, they can dash away and fight again shortly thereafter without needing to find a power node or use a health pack. Navigating as an alien can be tricky, but nothing more difficult than you already saw in the single player. 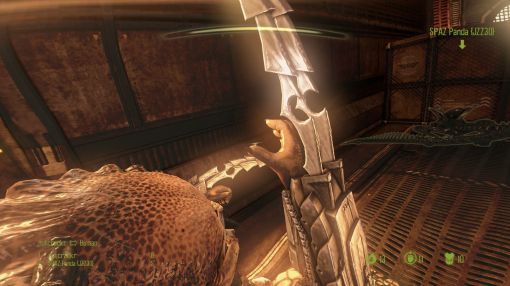 Instant killing a Predator from behind

Instant kills do play a big part of the game, any attack from behind by the Predator or Alien will instantly kill any opponent. These do get slightly cheap when players line up one after another. The reason is because it does leave you very vulnerable for a few seconds so you might have another player come up behind for an additional easy kill on small or populated maps. These instant kills encourage players to approach from the rear but at times they become overbearing to the gameplay and cheapen the experience.
Prev1234Next