An adventure that completely misses the mark

At one point in time, adventure games were at the top of everyone’s wish list, particularly within the indie game scene. After all, you did not need fancy 3D engines or expensive development cycles to produce clever puzzles and wrap them into a nice story. Years later, the new approach to more straightforward and simpler adventures, such as those from Telltale, has taken hold, and most of the indie games have moved to the platformer genre with pixelated graphics as their go-to design. After reportedly 9 years in development, Distortions comes from Brazilian studio Among Giants. Unfortunately, this adventure game serves as an example of perhaps why the old approach to 3D adventure games is no longer viable to indie developers. 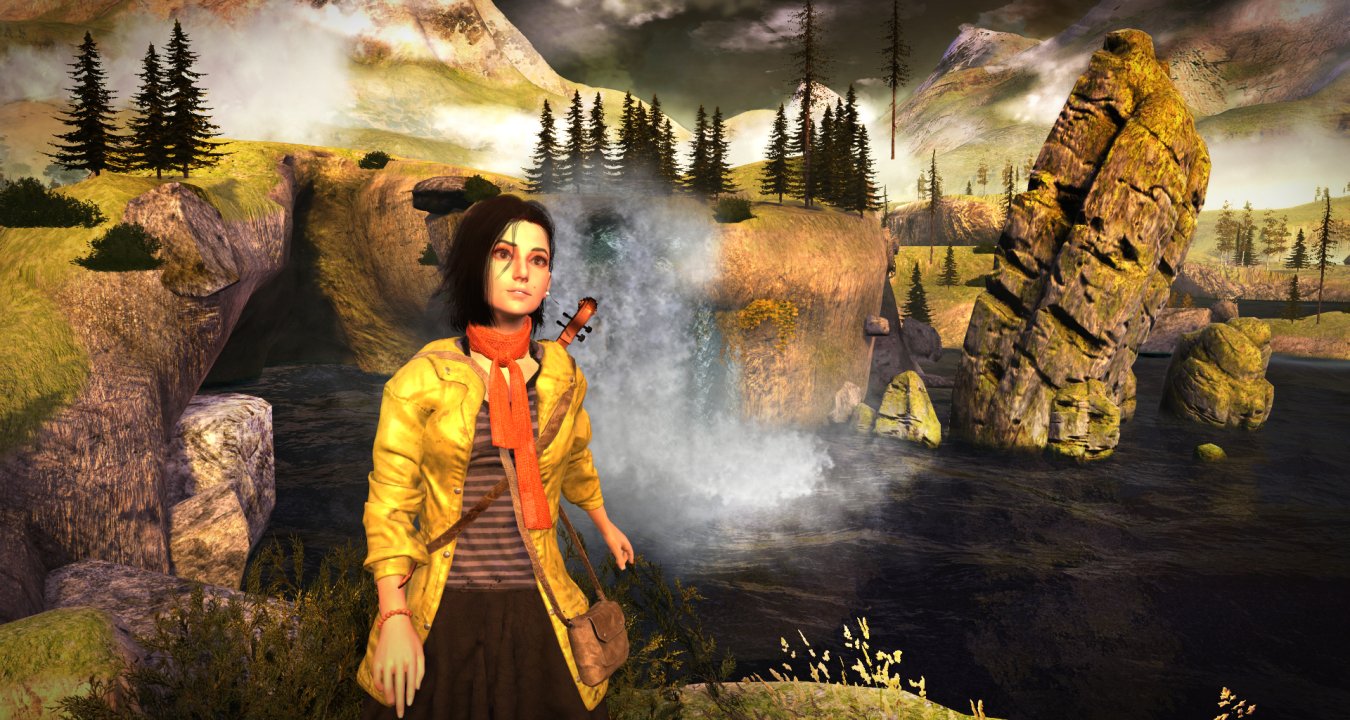 Distortions really lives up to its name, but in the worst possible ways. It begins with a jaded and confusing plot involving a woman, a car crash, and her violin. The nameless main character suffers from amnesia, after having apparently been in a car crash. In talks with her therapist, we learn that she is now somehow stuck in a mysterious world, and must find answers to escape and finally face a monster that lives within. It’s all very ambiguous and heavily laden with metaphors, which sadly will mean very little to everyone except perhaps the developers themselves. We learn of her ex-boyfriend, their troubles, and how it all seems to be connected to this strange dream world that she’s apparently stuck in. The narrative is convoluted, unrelatable, and tries to be overly dramatic without having any skills to handle its own ambiguity and symbolism. It just plain doesn’t make sense at times, like how the main character even got into a spectacular car crash on an empty highway, with pretty much no redeeming qualities. To use an example, it’s like if Hellblade or Remember Me was made by a small team of inexperienced designers that only have seen a bunch of early 90’s low budget adventure game stories.

Through the journey, you’ll explore a variety of environments that are quite unimaginative. The backgrounds may be pretty, but the levels themselves are bland and lacking detail. The game’s fantasy book-like world is sometimes switched out for the modern setting where text is dramatically overlaid on top of the walls (with occasional spelling errors), and you get to learn more about your real life and the ex-boyfriend. The game gets so swept up in its own ambition that it utilizes that adventure game trope where you begin walking in a direction and then get teleported to the end of the path, so as not to have to walk through an empty environment. The game is linear for the most part, even though you’ll often come across diverging paths; chances are, you will have to visit both in order to progress. The only thing to do in the world is collect journal pages, which slowly reveal new bits of the story. You could also run into foes, but all you can do is run as there is no combat mechanics.

And that’s a good thing, because even at a basic level, Distortions controls quite terribly. The movement is stiff and you’ll often find yourself stuck or glitching into the environment. You can jump over gaps and climb up ledges in certain spots, but it’s all very awkward. There’s a sprint button, but it’s an annoying and pointless mechanic, as the woman runs out of stamina after less than 10 seconds. Perhaps the worst part of it all is the camera which has an entirely scripted and separate life of its own. Sometimes, you have full control from the typical behind the shoulder, third person perspective. At other, entirely random times, the camera chooses to be cinematic as it pans across the level, sometimes leaving you in control, and other times taking it away. Occasionally, it changes to a fixed perspective, and either leaves you in a 3D level or changes to a 2D plane entirely. During set pieces especially, things become very shaky and you’re never sure what the camera/controls will do next, resulting in pointless falls to your death. All of these changes often make no sense in the context of the scene and seem almost completely random. Think NieR: Automata, but executed in the worst possible way. 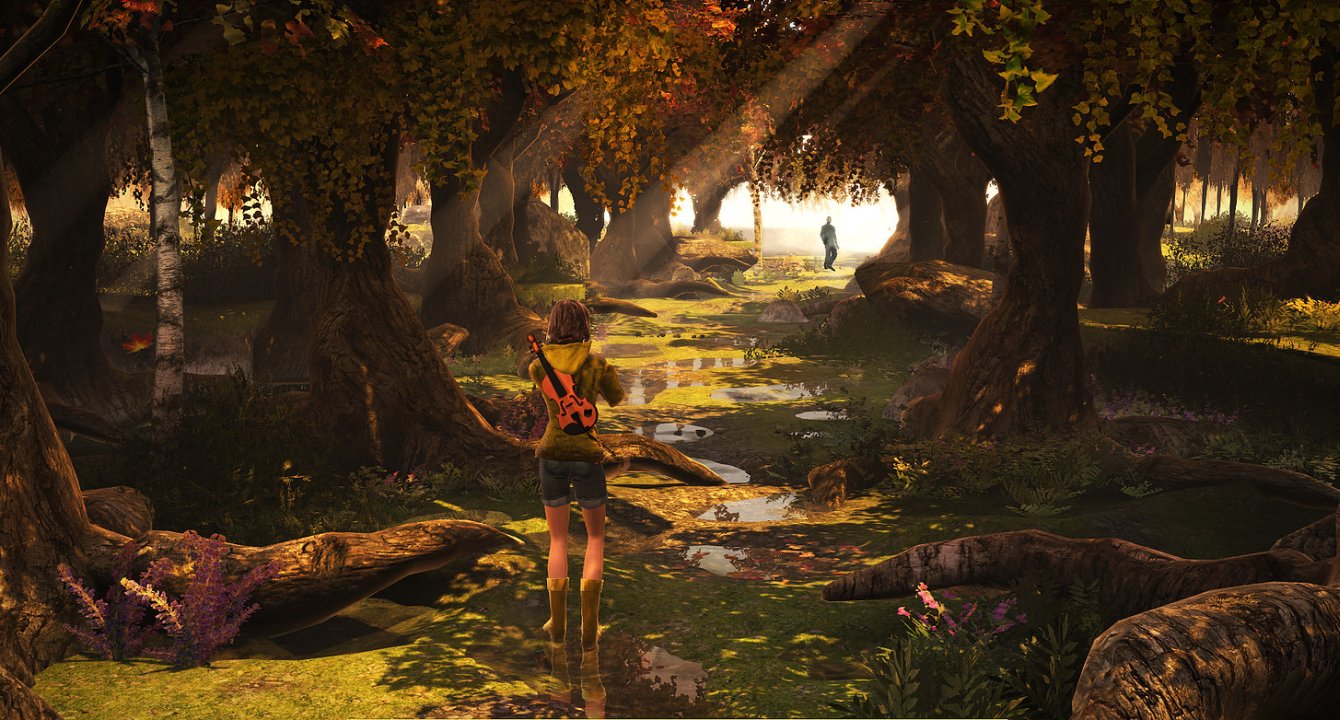 Over the course of the game you’ll explore a series of largely linear environments, though there are occasional sections where you can walk around more freely. Platforming aside, the only other main gameplay element is using your violin. You’ll come to learn a few different songs, which basically act as abilities to use at specific points in your journey. You could create light, restore a bridge, delay enemies and otherwise shift the world in your favor and in order to progress. The act of playing the violin itself is a brief minigame, asking you to match up the notes with timed presses of the WASD + spacebar. It’s not challenging or engaging, and doesn’t even really classify as a music game mechanic.

As mentioned, the presentation is definitely a miss. The background scenes of the worlds you visit may seem nice, and some of the texture work is actually alright, but for the most part this is a game that clearly does not have the budget for quality visual design or polish. The art, animations, and cutscenes all feel quickly slapped together. But even with audio, there are big problems. Despite having some original music, the game often chooses to absolutely overload the soundscape with tons of effects, layering everything on top of each other to create a big mess. Audio effects seem like they were recorded by the developers themselves, and the lack of quality audio equipment is obviously noticeable, especially during ambient scenes or action set pieces. And then at times, the game falls completely silent for no reason. It’s all just very strange and disjointed.

There are technical troubles, too. The game feels quite unpolished, with plenty of awkward and often broken animations, audio cutting in and out, volume not being normalized, and strange stuttering/freezing. There is tons of object pop-in, and it becomes extremely obvious during scene transitions such as when the world is supposed to dissolve – and yet you still see boulders left behind until they clumsily disappear. And of course, there are more serious issues like events not triggering properly, leaving you with a stuck world state and forcing a reload. The game needed much more polish. 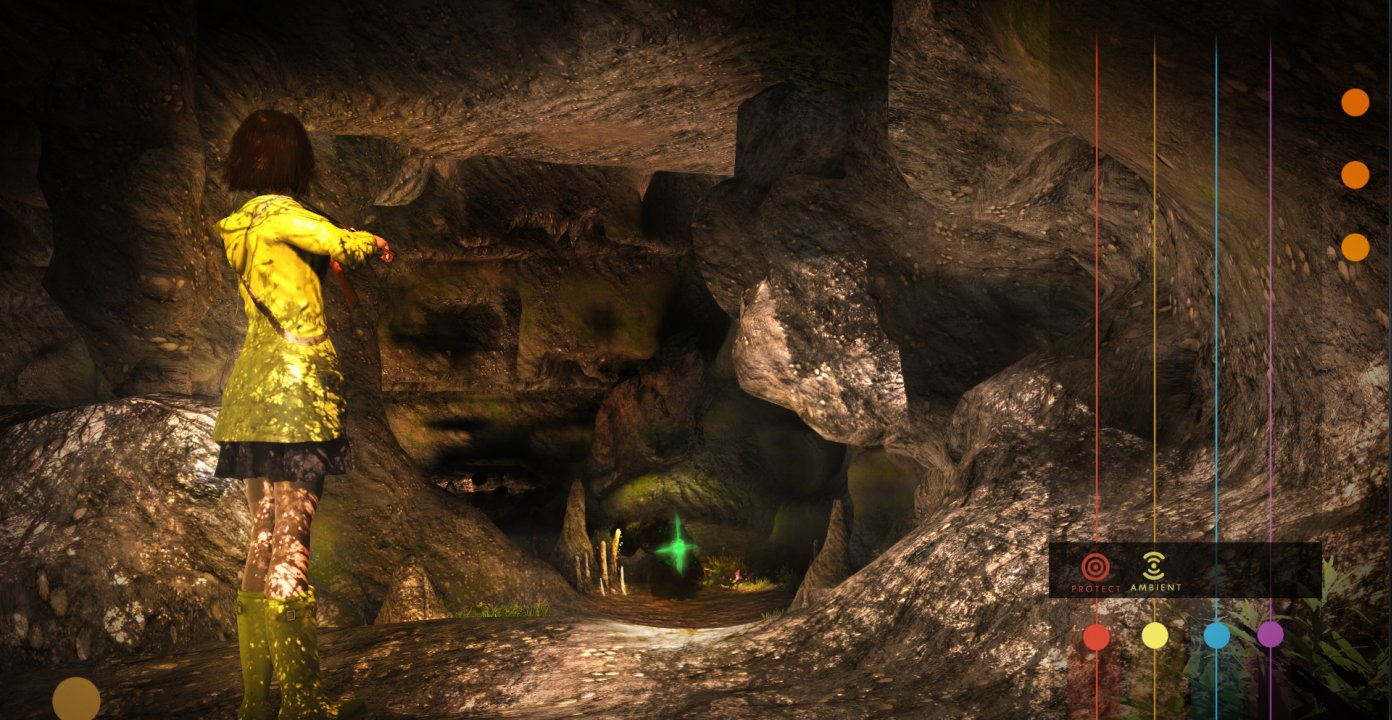 With all of its problems, Distortions fails to have any redeeming qualities. The story is confusing and not well told. There are translation issues, and poor design choices. On top of all that, the presentation is severely lacking, and isn’t helped by the many technical issues. It would maybe pass as a very passionate student project from a team that’s just finding their stride. But to ask $20 for something like this is simply astonishing. Distortions is best avoided, unless it’s on a big discount sale or has had large patches deployed.

Our ratings for Distortions on PC out of 100 (Ratings FAQ)
Presentation
45
A game that looks and sounds both outdated and poorly put together.
Gameplay
30
Stiff controls, simplistic design and plenty of glitches.
Single Player
35
A nonsensical story that shoots for the moon but ends up burning up on takeoff.
Multiplayer
NR
None
Performance
(Show PC Specs)
CPU: Intel Core i5-4670K @ 3.80 GHz
GPU: ASUS Radeon RX 580 8GB
RAM: 16GB DDR3
OS: Windows 7 Professional 64-bit

60
Runs acceptably for most of the time, apart from occasional freezes and random framerate drops.
Overall
37
Distortions adopts the negative connotations of its own name by offering an overpriced mix of poor storytelling, bad gameplay, lack of polish, and an outdated presentation.