A charming and challenging adventure

This might be the first time a game like this has attempted to be about something. Don’t get me wrong, I’m a big a fan of the Super Meat Boy's and VVVVV's as anyone. But while the tough-as-nails arcade platformer has been a popular staple of the indie games scene since there was an indie game scene, those titles haven’t always been able to say anything aside from, “Boy, this sure is hard, right?” Games don’t always need meaning, but when something like Celeste comes along that not only delivers an exceptional gameplay experience, but can tie that experience to a poignant lesson about adversity, you have to give it some extra props. 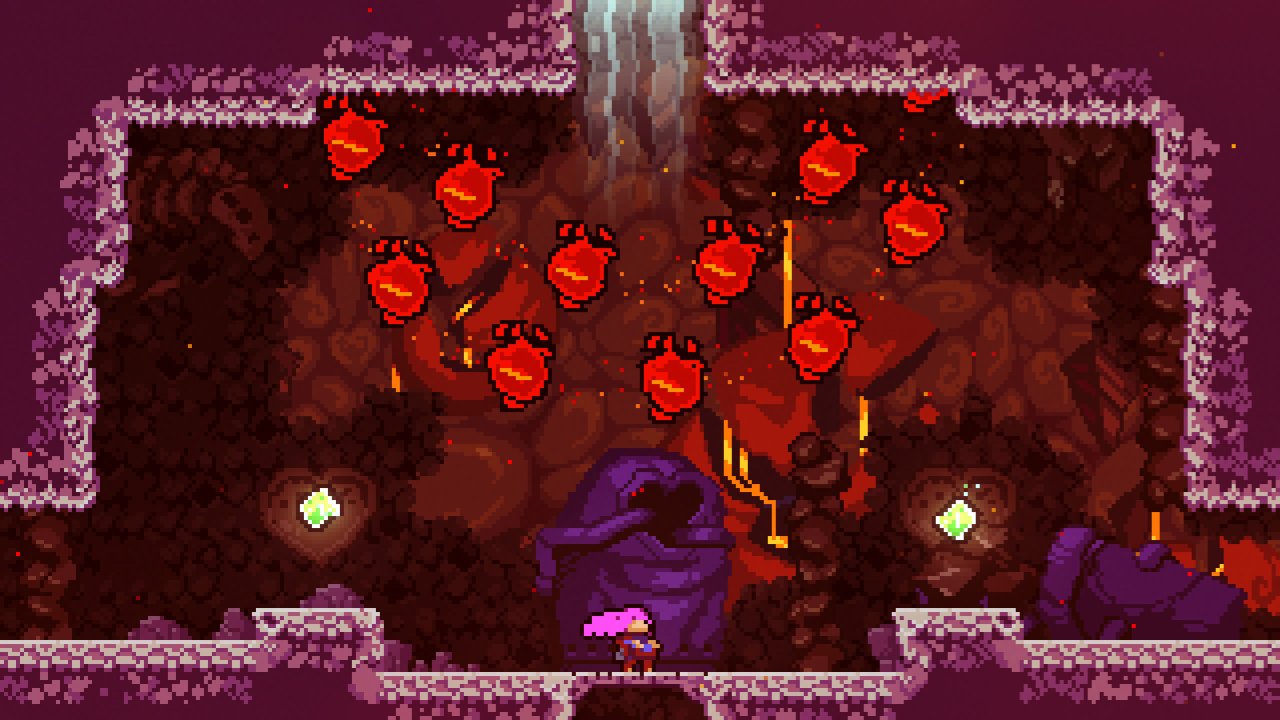 I’m not saying that Celeste is a better platformer than the games previously mentioned, but it’s tone and themes are where it separates from the pack. I’ll talk more, and at length, about how Matt Thorson and his team have crafted a fascinatingly frustrating experience which often lands its mark, but also worth noting is how much more restrained and mature this games feels when compared to Thorson’s first effort, Towerfall. While Thorson clearly has an eye for addictive gameplay, he proves that his studio, Matt Makes Games, also has the ability to tap into the human experience and conflict.

The titular Celeste is a fictional large mountain, located in Canada. Though it once boasted a city and an elaborate ski resort, the mountain now has become uninhabitable, serving only as an obstacle for those who wish to climb it. Enter our protagonist who is unnamed, but for the sake of the review I’ll refer to her as Madeline, the default name the game assigned me.

We don’t know a ton about Madeline and the game only ever hints at what her past might be. Through context clues, it seems like there might have been an ex-boyfriend or a personally humiliating incident that led to her resolution to climb Celeste, but none of these hints are explored - nor do they need to be. Again, Thorson shows restraint by only hinting at the ancillary problems in Madeline's life, while realizing that this exposition isn’t the real meat of the story. The core of the game is simply about Madeline and her battle up this treacherous mountain.

Yet, for as little as we know about Madeline, she’s instantly endearing in her struggle. We all can relate to her difficulties as the human vs nature conflict has existed as long as time itself. It helps that we can see her as her own worst enemy, obstructing her own progress through self-doubt and a crippling fear that she might be in over her head. The game might be little too on the nose as Madeline’s fear manifests itself in the game’s antagonist, a physical mirror image of herself that represents Madeline’s internal struggles. But there’s a much more subtle hint at Madeline’s internal conflict as she deals with crippling panic attacks. Lastly, we also want Madeline to succeed because everyone tells her (and the player) that they can’t, that it’s impossible to climb the mountain. The deck seems stacked against our hero and the overwhelming odds make the reward all the sweeter. 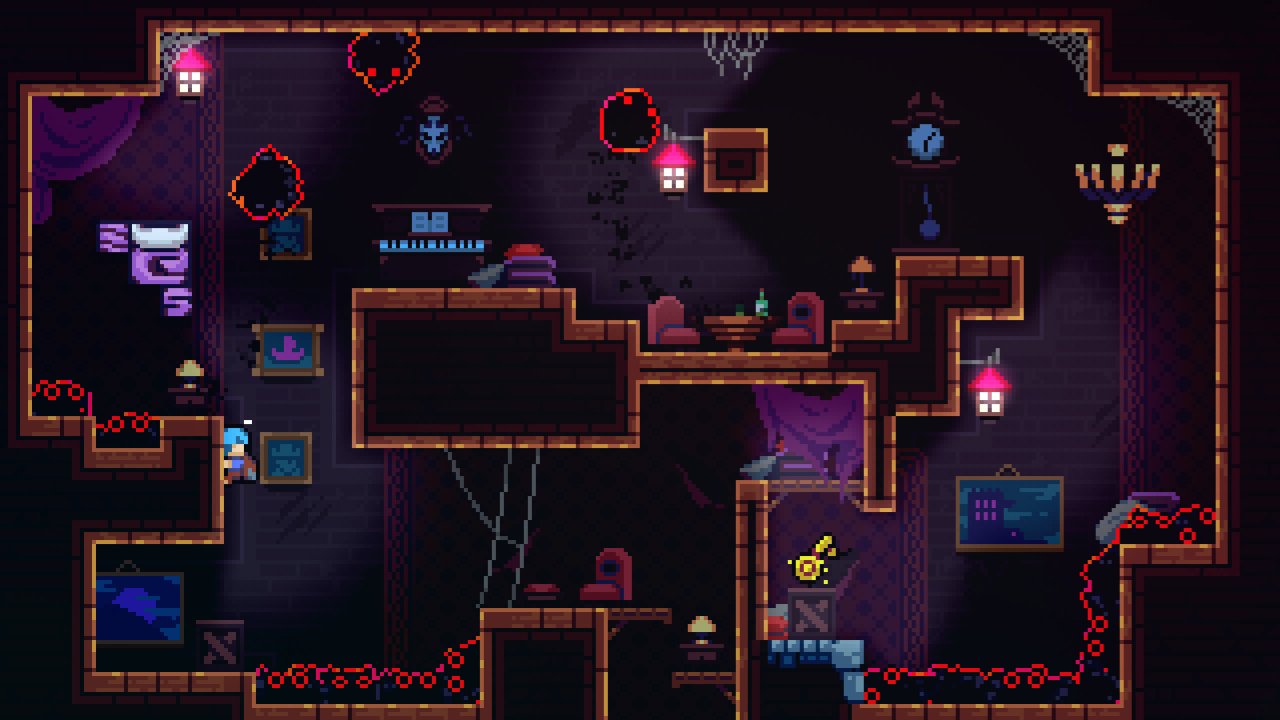 And the odds are overwhelming. Where Celeste truly succeeds as a game is taking that feeling of impossible odds and inevitable failure and marrying the narrative and the gameplay. We know the mountain is difficult to climb because as we guide Madeline through impossible labyrinths of metal, ice, and stone, we too begin to wonder if it’s possible to complete the task.

Celeste is brutally difficult. The kind of game that leaves your thumbs swollen and your knuckles aching. A beautiful blend of mechanics makes this far from an average platformer. Not only do you have to time your jumps, but the game also forces you to consistently use a dash mechanic to reach seemingly impossible places. You spend most of the game with only a single dash, but it can be recharged by landing on your feet or getting certain items. Then, after you’ve jumped and dashed, you’ll have to use the trigger of the controller to hold onto the side of the platform and crawl your way up. This is the game at its simplest, the barest of bones. Each platforming challenge stretches and condenses the needed understanding of the controls to constantly test the player in different ways. Just when you think you’ve got the dash move down, you’ll find a level that focuses more on the precision of landing a jump or dodging an object.

On top of the deviously brilliant level design, each chapter of the game has a specific mechanic it will use to test you. An early level features large blocks filled with stars that Madeline can either climb or dash through, shooting her out the other end with a recharged dash. Another level features the ability to fly. Each of the these moves start out seeming like an aid, something that is going to make the game easier, but Celeste is relentless and all these additional mechanics actually do is add another ripple to the gameplay to test your skills even more. 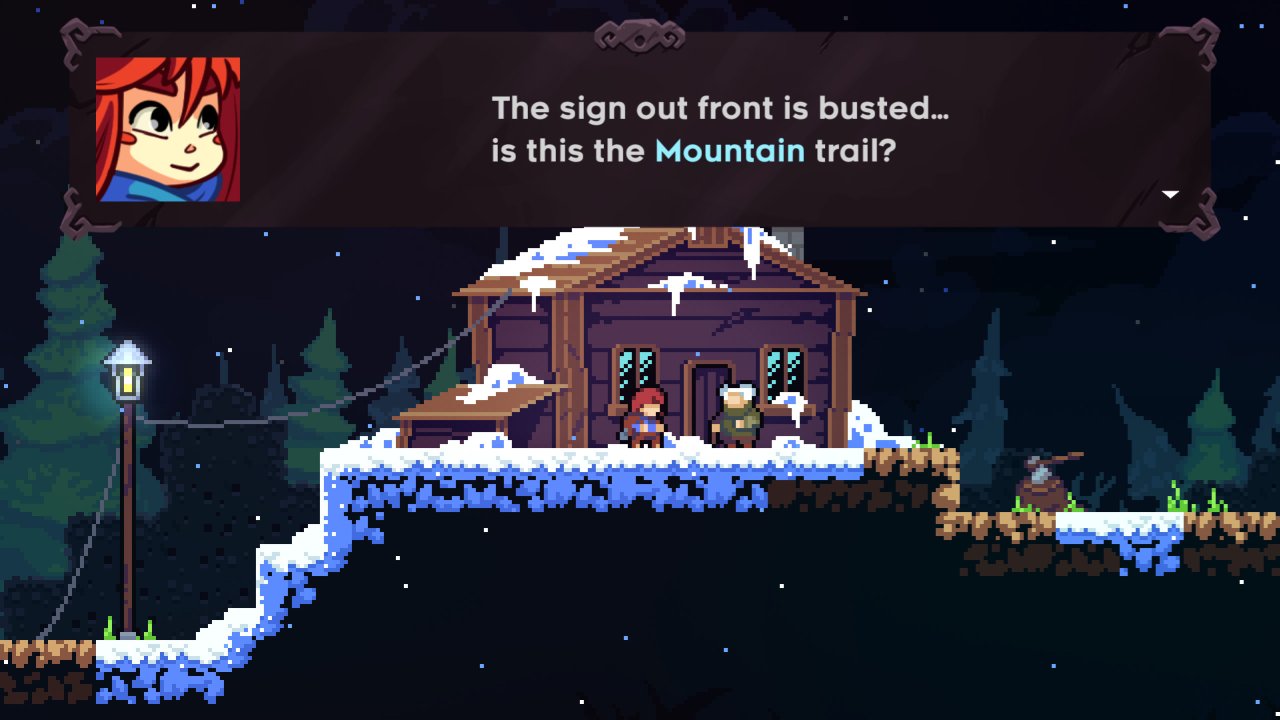 If you really find yourself stuck, there is an assist mode that grants extra dashes, slows the game speed down, and can even make you invincible. For the most part, the game doesn’t punish you if you need help (which I’m not too proud to say I accepted a couple of times) and even says that while it’s meant to be challenging, it also wants to be accessible to all players. That’s a pretty impressive move for a developer of a game like this, hoping that it can provide a measure of accessibility amidst it’s infuriating difficulty and I think it’ll definitely allow more people to see the experience through to the end - which is good, because the ending is a real treat. Also, the game is forgiving, auto-saving at the beginning of every room so you’ll never lose progression through failure.

The pixel art of the game is a little hit and miss. Madeline’s model feels a little strange compared to her in-game portrait, and while there’s a lot of color at work and interesting riffs on the cold, snowy mountain world, the game lacks any striking visuals or truly mesmerizing moments. Everything is functional, but there are always hands in the background, supporting the gameplay - except for when it gets in the way. Celeste also has a great soundtrack, a synth-y rhythmic melody that is equal parts emotional and inspiring. It’s electronic, but avoids the cliché chiptune sound. It’s used to help carry the game through some of the more emotional moments.

The game isn’t without its flaws. The movement of Madeline doesn’t always feel great. There’s a required precision that is obscured through the controls that makes you feel like sometimes a death isn’t your fault. Part of this seems intentional, but I don’t think you universally wipe away the issue with that notion.

The larger problem lies within the aesthetics of the game. While Celeste is visually pleasing, blending together a fascinating palette of colors to simulate the strange beauty of a snowy mountain lit by a setting sun or starry night, the colors sometimes obscure certain platforming elements. It’s not an abundant problem, but consistent enough, especially in the latter levels. 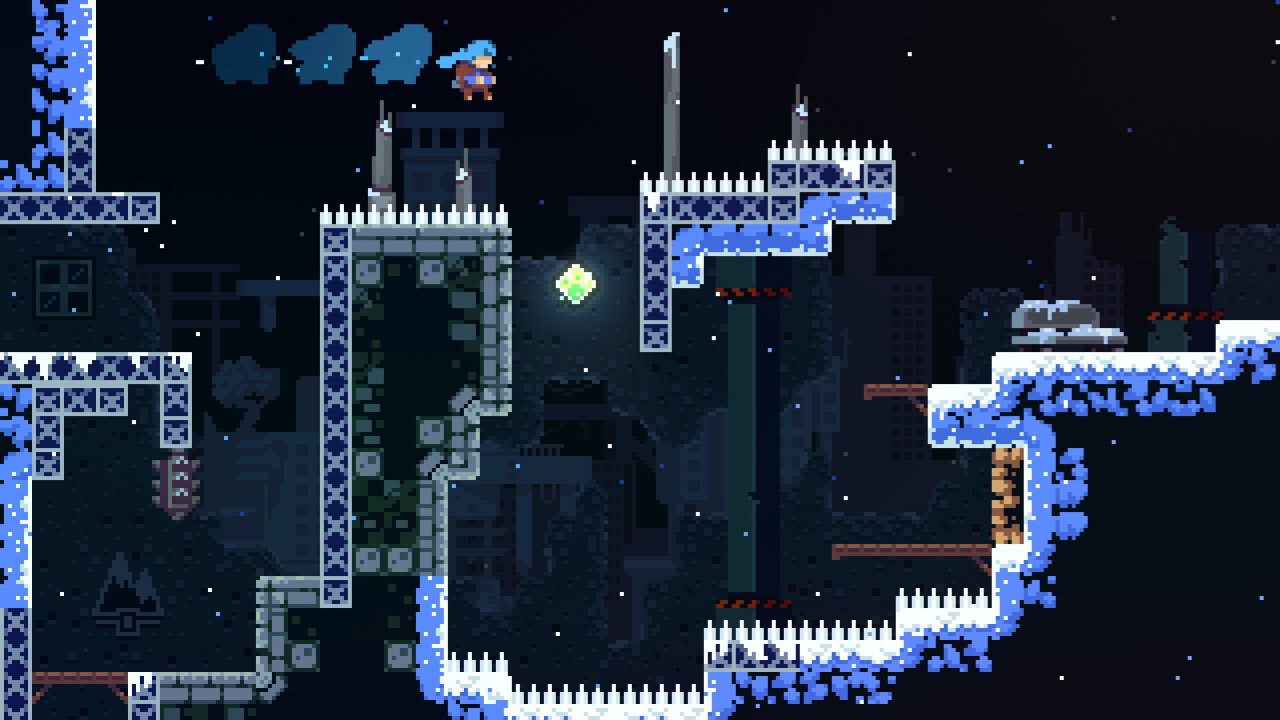 I also hit a technical snag in the hotel level where the music tracks would skip in the background, then slowly the rest of the game’s framerate would drop. I had to restart a couple times because of this, but luckily, Celeste always saves in the exact room you left on, so there’s never any lost progress.

Celeste definitely delivers where it counts. Its mechanics are wickedly brilliant and well crafted, and you might not even appreciate all of the platforming tools because they’re blended in so well. It delivers a story that connects not only with the gameplay but the relatable struggle of overcoming adversity, both within and without, to accomplish something others told you was impossible. Like Madeline, Celeste is not perfect, but it is wonderful nonetheless.

Our ratings for Celeste on PlayStation 4 out of 100 (Ratings FAQ)
Presentation
74
The soundtrack is well done, but the art of Celeste lacks style or attitude, mostly fading into the background.
Gameplay
86
Movement can occasionally be a little sticky, but it doesn’t keep each challenge from being addictively difficult. There’s a thoughtful blend of mechanics that keep the game fresh.
Single Player
90
The chapters each boast their own challenges and setting, keeping them unique, and the story of Madeline’s struggles to accomplish the feat of reaching the summit is instantly engaging.
Multiplayer
NR
None
Performance
72
I hit a couple of bugs that caused me to quit out of the game, but thanks to a forgiving save system, I always found myself right back where I left off.
Overall
80
Celeste has a couple of hiccups in its aesthetics and tech, but the core of what Matt Thorson and his team have made contains a wonderful story of endurance and resilience for both the characters and the player, that begs not to be missed.

480. Shadow of the Tomb Raider
PlayStation 4