Stuck in the stone age

In this modern era of remakes and remasters, it isn’t very surprising when some older series gets announced as coming to newer consoles. Since developers and publishers are always looking for some way to tickle the nostalgia bone, an easy solution is to simply port older classics and be done with it (disregarding how much work actually goes into doing so). It was still rather shocking when Microsoft announced that it would be remaking Age of Empires, though, as the series hasn’t been active in almost 13 years. 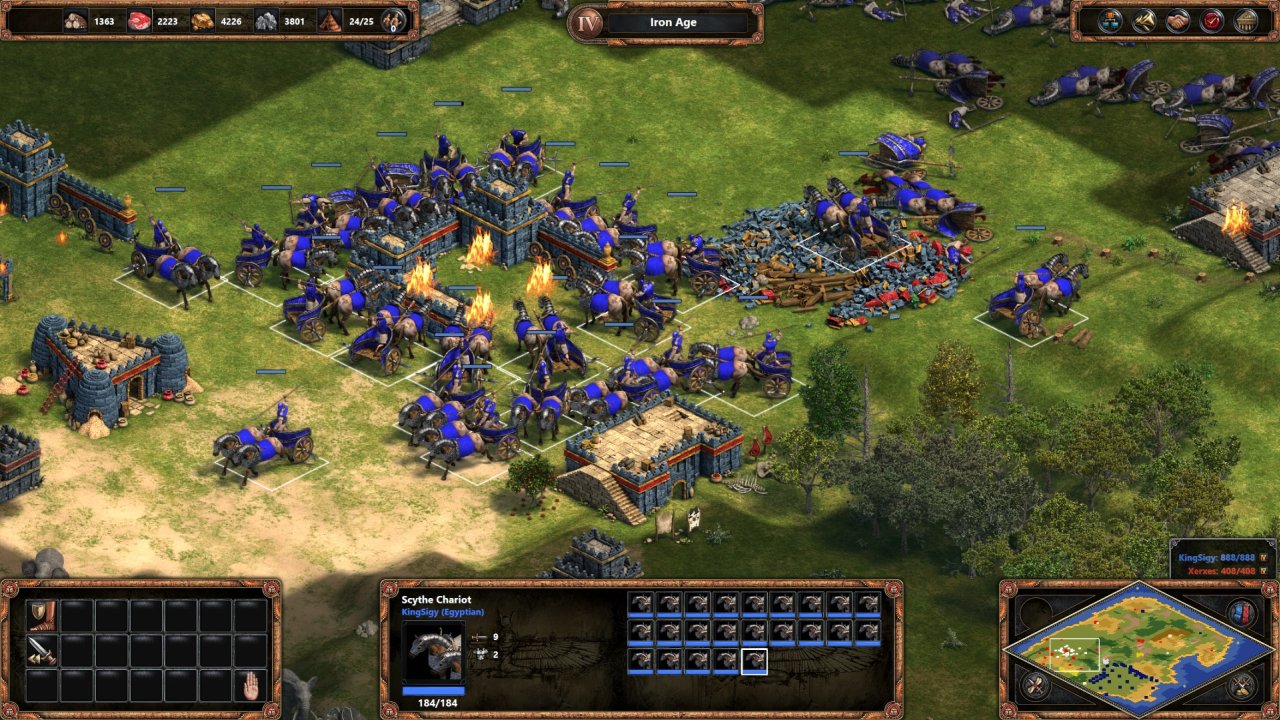 In fact, Microsoft hasn’t really made much in the way of strategy games in the last decade. To say fans were pretty excited is an understatement, as this remake was going back to the very beginning and giving old and new fans a chance to experience where the RTS genre got its big push in popularity. While the effort is admirable, sometimes the past is better left in our memories.

Age of Empires: Definitive Edition includes every officially released campaign the classic title had. This means you’ll get the four campaigns from both the base title and its expansion, Rise of Rome, along with the two campaigns that were exclusive to the demos for each title. This makes for a staggering 10 campaigns to play through and this is before even talking about scenario maps or the custom campaign editor.

There is quite a bit of content contained in this remake, but it doesn’t make up for some of the shortcomings of the original title. While the presentation certainly looks clean and vibrant, not much has been done to tweak the gameplay to modern standards. In fact, the campaign mode is an exercise in frustration thanks to an AI that is practically perfect.

I suppose with such stark competition in 1997, Ensemble Studios made Age of Empires a game that would last players for eons by cranking up the AI’s intelligence. Age of Empires is a game that requires players learn the ins and outs of how to gain resources and plan attacks, because failure to do so will see you fail pretty swiftly. Even on “Easy,” Age of Empires doesn’t joke around; you can expect to see enemy opposition within five minutes of starting any mission and that is if the AI decides to take a break.

While the tutorial campaign does bring you up to speed on the various different systems you’ll need to keep track of, venturing beyond that is going to take quite a bit of time. What really gets me is that a lot of these problems were fixed in the sequel, Age of Empires II, so why has the AI not received an upgrade for this new version? It would make sense if playing in classic mode reverted the AI to its pre-tweaked state, but with either the classic or Definitive Edition ruleset in play, Age of Empires is just plain punishing.

Most people were never big on the campaigns in Age of Empires, though. Lots of players have fond memories or jumping into custom skirmishes and obliterating the AI by amassing a small army and tearing loose. Thankfully, that is still an option in this remake, but one AI problem still exists. The pathfinding for units is terrible, no ifs, ands or buts. Again, I could understand having these original AI present for legacy gameplay, but I expected something better for the Definitive Edition.

With those quirks accounted for, at least you can actually queue up units from your barracks, town center, archery range, etc. Since Age of Empires was a trailblazer in the RTS genre, unit queuing wasn’t even a thing in 1997. The Rise of Rome expansion brought that to the series and it has thankfully been kept here. Along with that, the population cap has seen a huge boost, going from the original 50 units to about 250 now. This makes for some suitably gigantic battles that will require a lot of micromanaging.

As for how a typical match plays out, the biggest drawback to the original Age of Empires is that progression is pretty straight forward. This is the game that started the trend of having specific ages or periods that players would progress through. For instance, you’ll start in the “Stone Age” before amassing enough resources to push into the “Tool Age” and so on. This was unique in 1997, but has been tweaked and changed throughout the years to allow for more improvisation in gameplay.

Since Definitive Edition doesn’t mess too much with the core experience, most matches feel pretty rigid in style. You won’t be trying something radically different to achieve victory, because thinking outside of the box is a great way to lose (especially against the aggressive AI). I only bring this up because, again, Age of Empires II solved a bunch of these problems and it seems so odd to perfectly recreate all of the flaws of the original. 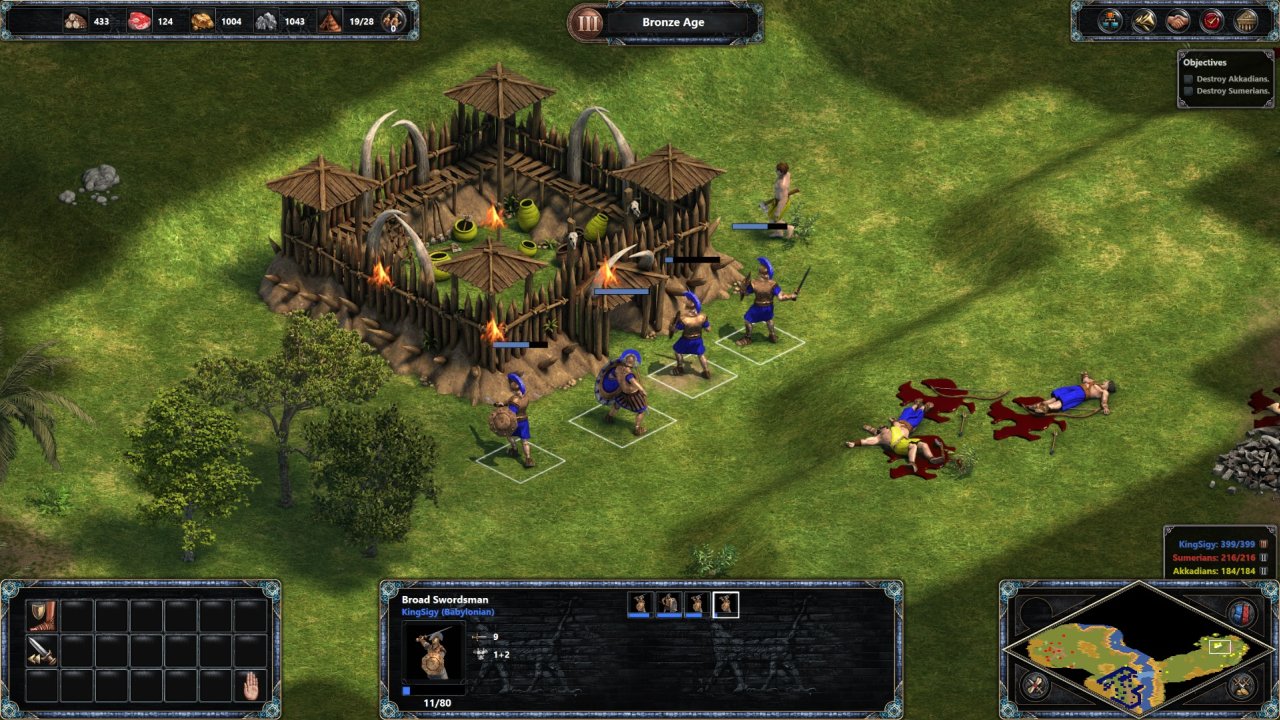 Maybe this is more of a case of video game preservation, which I’m all for, but playing any mode in Age of Empires: Definitive Edition didn’t hold my interest for that long. I forced myself through all of the campaign maps, but I didn’t really stick with any of the skirmishes since I just longed to play the far superior sequel again.

This dedication to the original title also follows in the art direction for Definitive Edition. New developer Forgotten Empires has truly nailed what the original game looked and sounded like, because my memories of the classic title synced up perfectly with how this remake looks. Since you can actually switch between the two styles in this game, taking a quick glance into the past shows just how good of a job the Definitive Edition does in modernizing the original artwork. I won’t say this is a perfect remake, but purists won’t feel like they got short changed with some dramatically different interpretation of their beloved game.

That being said, the options for resolution and quality are sorely lacking. Seeing as how Age of Empires is a 20 year old game, it will more than likely run on any PC you throw at it, but I’ve still managed to see some stuttering and slowdown in rare instances. Having options to tweak anything would be greatly appreciated.

The menu provides basically nothing that you can change, apart from the speed of the game and zoom levels. There are no quality settings, no differing resolutions or even an option for Vsync; what you see is what you get. Oddly, the zoom levels seem to have a direct impact on how the visuals look, but they also highlight one of my biggest complaints with this new version of Age of Empires. 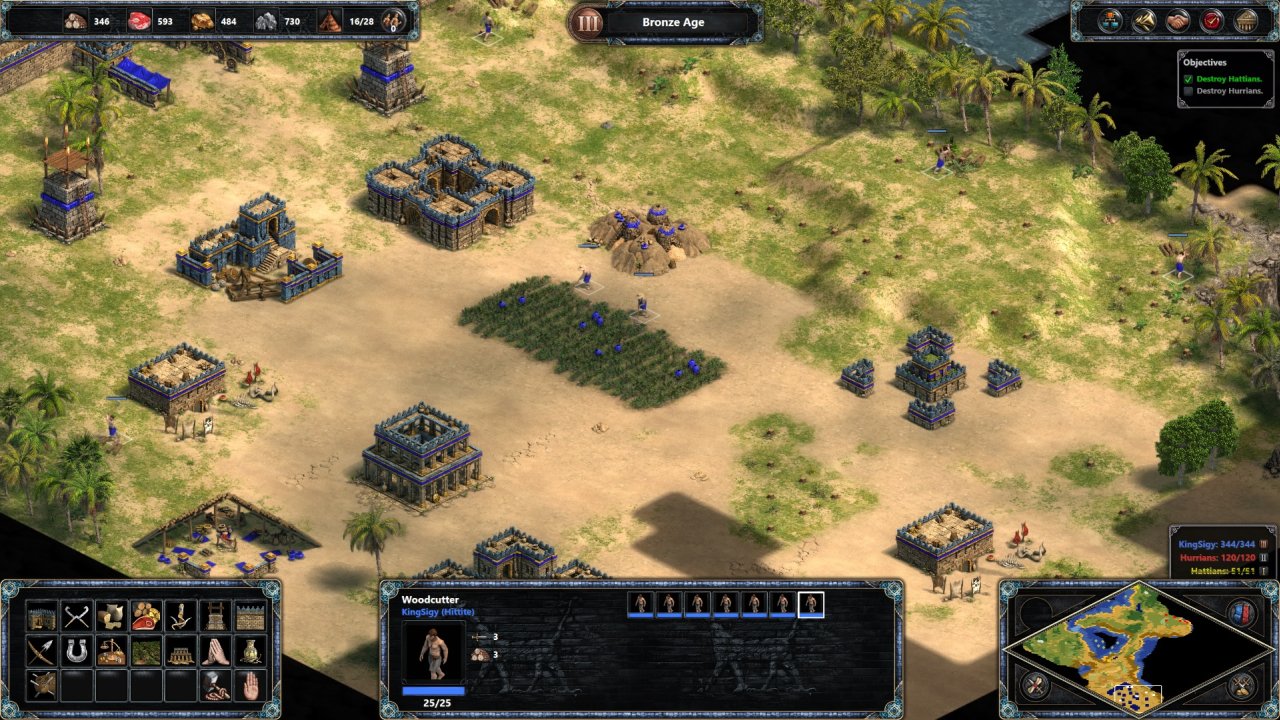 You can now zoom in on the action with the mouse scroll wheel, which is fine in theory, but starts to have a direct effect on how battles work. Putting the zoom level to x4 in the menu gets you real close to the action and makes the new artwork shine, but then your playfield is more limited in scope. Conversely, going for x1 makes the artwork look rather blurry and often obscures details too much to be useful. This is a strange option that could potentially give players who get accommodated to the x1 setting an advantage in multiplayer, since they’d have a larger field of view to work with.

Then again, you won’t really have to worry about that as online multiplayer is pretty bad. I’ve only managed to complete three matches in all of my testing, because players lose connection on a moment’s notice. The server lobby is at least filled with useful information (such as player count and ping number), but finding matches takes time and getting anything with even a playable amount of lag is basically impossible.

To be fair, these same problems plague the HD version of Age of Empires II on Steam, but I thought an official remake by Microsoft would at least have a functional online mode. Instead, we’ve been given the most barebones effort imaginable and asked to accept it. If you do manage to find a stable match, you can still use custom scenarios or campaigns online, but I don’t feel that is a good compromise for stability.

At least when I had had enough of bashing my head against the wall, I could cheat my way to victory. Video games used to actually allow players to cheat without paying for microtransaction DLC, so I’m definitely on board with the decision to retain all of the amazing cheat codes for Age of Empires. This means you can bust out the rocket launching Camaro and rein fire on your opponents from a distance. If the AI is going to cheat, why can’t you?

This also let me create some scenarios where I would place a single Camaro against nearly 1,000 enemies and see how long I could last before dying. I actually had more fun tinkering around with the campaign editor than I did in any other mode, which I guess is a perfectly viable way to relive this classic game. 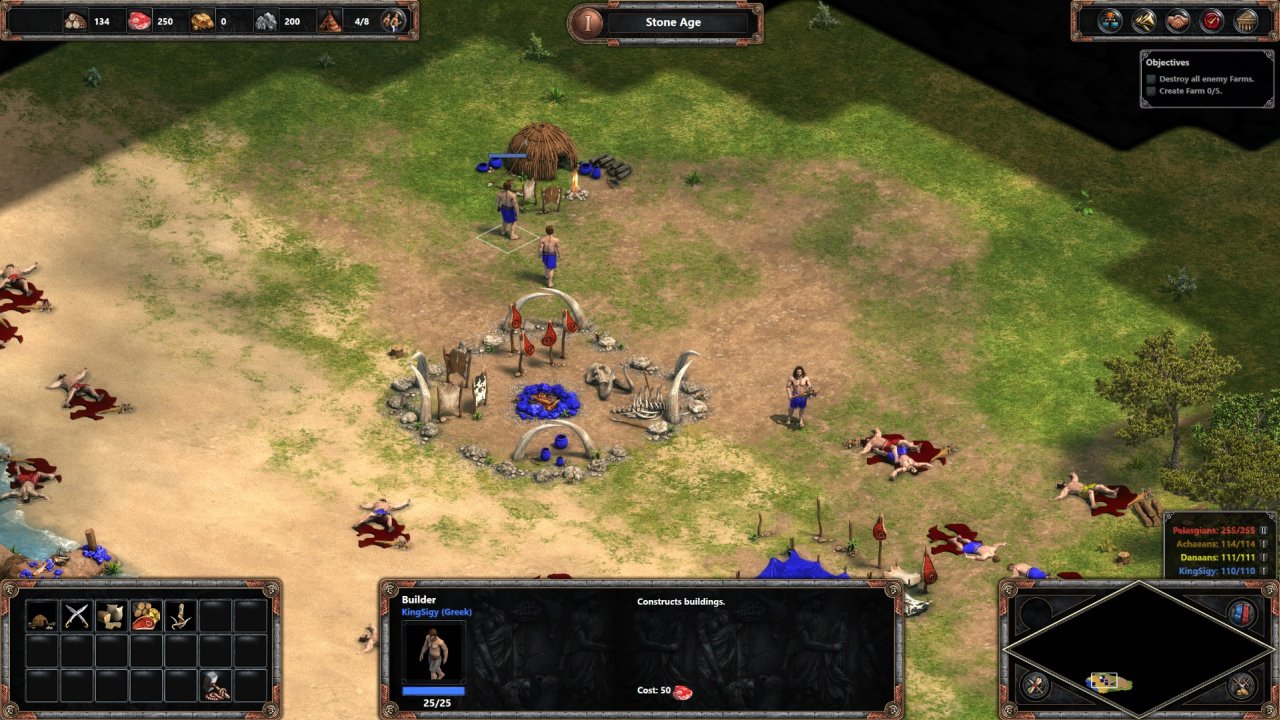 At the end of the day, though, I’m not really sure who Age of Empires: Definitive Edition is for. Many fans still hold that Age of Empires II is the pinnacle of the series and seeing as how this new version does virtually nothing to fix any of the original AI problems; I can’t see many people sticking around with this. The issues with multiplayer connections are also strong enough that I can’t even recommend you buy this solely for online competition.

Sometimes the past just belongs in the past, despite how influential Age of Empires was for the RTS genre. Not everyone can remain king forever.

Our ratings for Age of Empires: Definitive Edition on PC out of 100 (Ratings FAQ)
Presentation
75
Sticks so closely to the original art style that you might find yourself double taking to make sure this is even new. The colors pop, the details are crisp and units move smoothly to the backdrop of a redone soundtrack. Definitely the highlight of this remake.
Gameplay
55
Still feels like a game from 1997, with some super frustrating AI and poor pathfinding. Modern advancements to gameplay are ignored in favor of preserving the original feel, which is a little aggravating.
Single Player
70
There are a staggering 10 campaigns in this Definitive Edition, which should provide roughly 15 hours of content. There are also scenarios and a custom campaign editor to keep you occupied for a long time.
Multiplayer
50
While an online mode is present, it isn’t very stable and often suffers from lag. Getting into matches can also be a pain as players will drop out on a whim. LAN support is at least included.
Performance
(Show PC Specs)
CPU: Intel Core i7-3770 @ 3.4 ghz
GPU: Nvidia GTX 1060 6GB
RAM: 16GB DDR3
OS: Windows 10 Home 64 bit

70
There are tiny bits of slowdown when using the zoom options, but this game mostly runs at a solid framerate with no trouble.
Overall
60
Age of Empires: Definitive Edition is a very faithful remake that captures every single quality of the original title. That means you're getting a wonderful new presentation alongside all of the blemishes of the past. 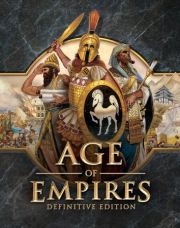