Time for a Reload

Shoot 'em ups, otherwise known as shmups, are a relatively niche genre of action gaming that used to be prevalent during the Arcade era. Games in this genre were more focused on providing quick thrills and intense challenges than being long lasting experiences or telling compelling stories. We’ve seen great strides in the genre since the ‘80s, but those arcade roots still prevail to this day. 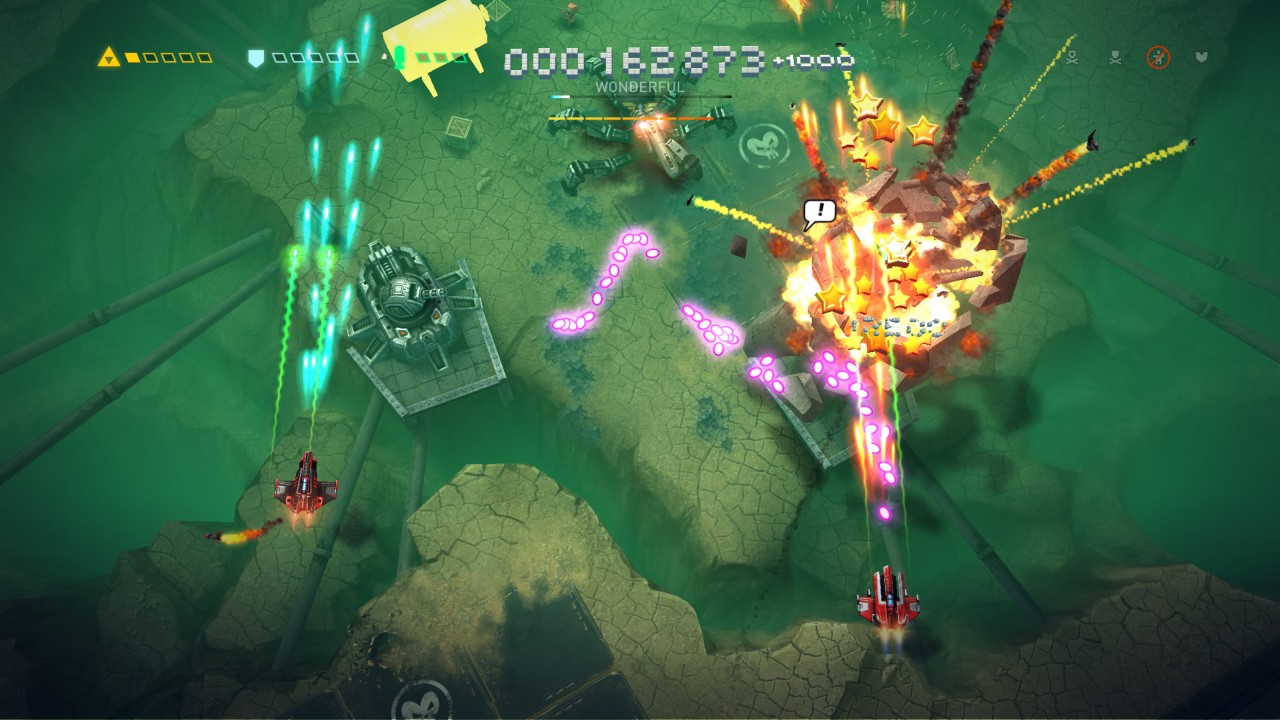 While shmups aren’t lacking on the Switch, there aren’t a whole lot of new ones on the system. You can dig into a bunch of older ports and some remakes, but anything made in the last few years isn’t really represented. Sky Force Reloaded looks to change that, but it stumbles on a lot of the basic elements that make shmups enjoyable.

The biggest thing I need to point out is that Sky Force Reloaded is actually a port of a free-to-play mobile game. For the price of absolutely nothing, you can enjoy this game on your iPhone or Android device and get pretty much the same experience, albeit with wait timers. This detail is important, because Sky Force Reloaded is a grind heavy game that makes getting to the conclusion a real chore.

The basic gist of the experience is that you’ll be blasting your way through 13 levels in an effort to stop some evil force from doing… something? To say the plot is limited would be an understatement, despite the fact that some evil lady will chime in to talk to you when you defeat a boss. There aren’t any pre-mission briefing screens or even a text description of what is going on; you’re just thrown in to a short tutorial and get killed before you even know what hit you.

After that, you’ll breeze through a relatively simple first level before hitting the true roadblock of whole experience. Sky Force Reloaded has extra objectives on each level that award you medals, but these medals are required to unlock later missions. You won’t really notice this until level three, where the requirement goes from one medal (which is basically guaranteed to be unlocked) to around four.

These extra requirements are all the same on every level (save for the one different mission) and require you to kill 70 and 100% of the enemies, save all of the downed pilots on a level and then complete the level without getting hit. That last one is a real pain, because the screen can become riddled with flying bullets in some segments. Since you’ll eventually need to start perfecting levels, this drags the whole thing down quite a bit. 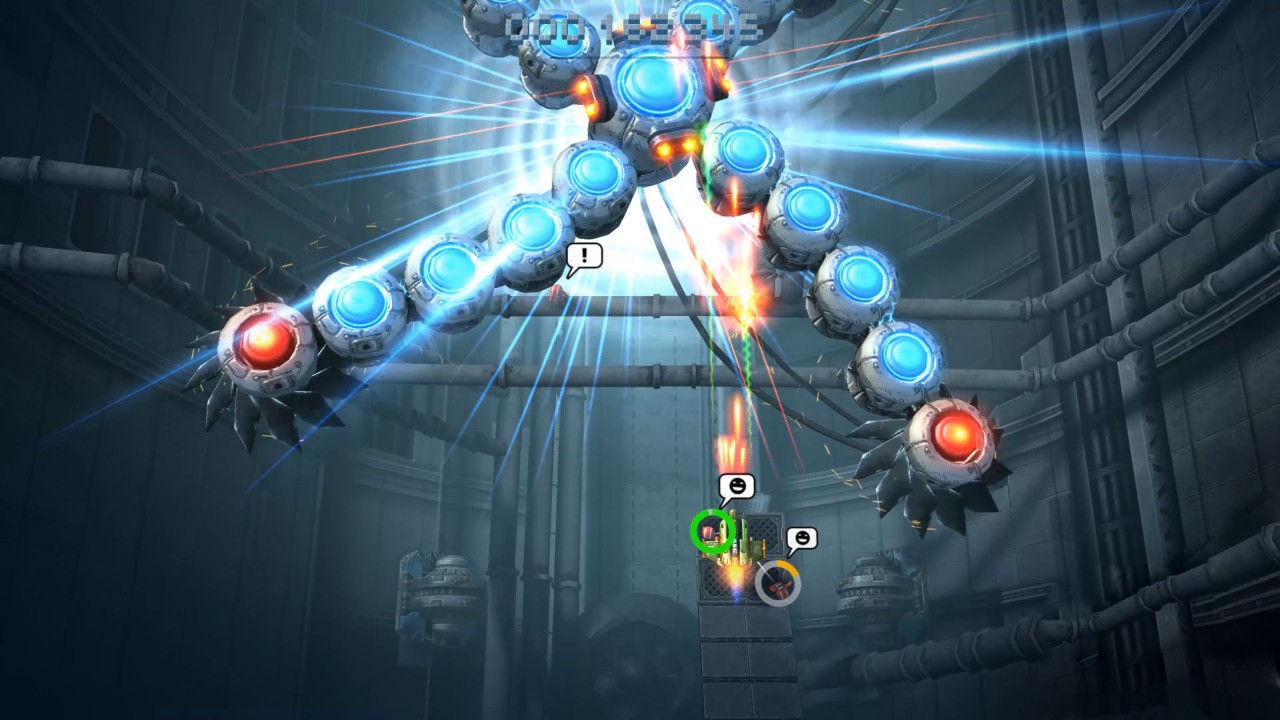 To mitigate some of the grind, you can upgrade your ship to better tackle each level. When defeating enemies, they’ll drop stars which act as currency in-game. There are a whole range of upgrades you can then buy that will alter your maximum health, your fire rate, your power-up’s efficiency and even a magnet that attracts stars to you. Unlike the mobile versions, you won’t need to wait to install any of these, either, so you can pick something and get right back into the action.

The problem is just that even making progress in the campaign requires you to become an expert at almost all of the levels. If you manage to get all four medals on a particular level, you’ll unlock a harder difficulty that then gives you another four medals to unlock. Since later missions will require around 25 additional medals each, you’re going to be spending an extreme amount of time replaying levels and trying to perfect them to unlock even more medals.

This is clearly a relic of a free-to-play title, which can’t simply give away content for free. I even installed the mobile port to see where the microtransactions were, to which I found you can pay to remove ads or increase the amount of stars you’ll collect in a level. This Switch port (and by extension, the other versions available on PC, PS4 and Xbox One) don’t have these options, opting to rebalance the upgrade distribution and get you playing faster.

Still, the grind to make progress in this game becomes way too much. For a premise as simple as flying upwards and blasting enemies, the game quickly becomes a slog to get through. To reach the 13th level and complete the game took me about 16 hours, which means I spent about an hour and 10 minutes on each level. These maps only last about five minutes, save for a few of them, so I ended up memorizing them and practically completing them in a comatose state. 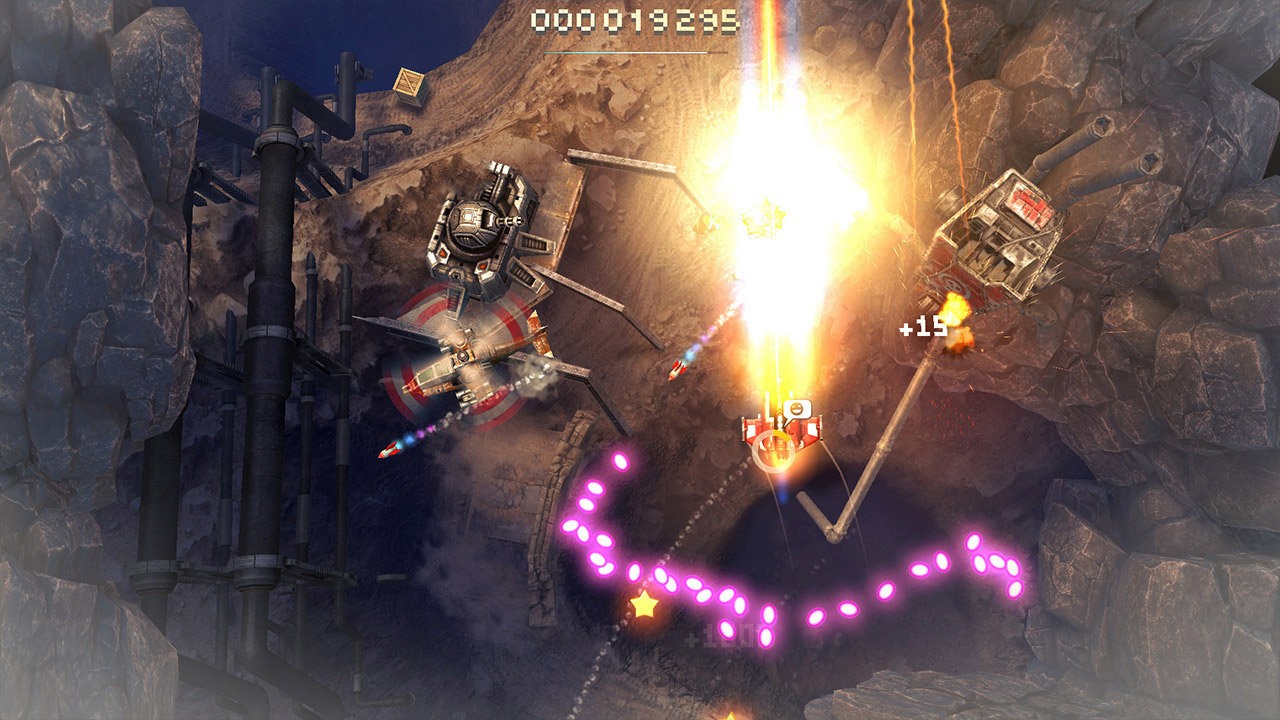 It doesn’t help that the only different gimmick is in the fifth level, where all your weapons get removed and you’re tasked with simply avoiding enemy fire. That is genuinely fun and a nice change of pace, but every other mission is the same thing with slightly different backgrounds.

The reason old-school shmups are so highly regarded isn’t because they were lengthy, but because they kept things brief. You could power through something like 1943 in an hour and it made you feel like a champion. Moving into the 20th century, Ikaruga was roughly the same length and managed to have interesting gimmicks on every single level instead of dragging the whole game out to hit some arbitrary length. Sky Force Reloaded wants to sound more impressive than it really is, so it basically triples the level count and then requires you to grind away to get anywhere.

I could even tolerate that if I was unlocking different ships, but even that is hidden behind a needlessly elongated grind. There actually are some different aircraft you can unlock, but I didn’t manage to get a single one in my entire time with the title. You’ll have a random chance for an aircraft piece to drop when killing enemies, but you then need to finish the level to keep that piece. Imagine how many times I died while carrying an unlock and you’ll start to get an idea of how ridiculous this game becomes.

This also occurs with the “card” system in Sky Force Reloaded, which offers temporary or permanent upgrades to your ship. Sometimes an enemy will drop a card that you can nab and if you finish the level after grabbing that card, you’ll have a random chance of unlocking a normal or gold card. Normal ones give you temporary upgrades like “Double Stars Dropped” or “Maximum Fire Rate” while gold ones provide random chances for things to happen, such as your shield power-up activating.

While that is all fine and dandy, the drop rate for getting any of these things is far too low. I somehow got eight different cards, but they were almost never useful and didn’t do much to help me through the game. Even with the “Double Stars Dropped” card, I hardly made a dent in the upgrade system for it to matter. 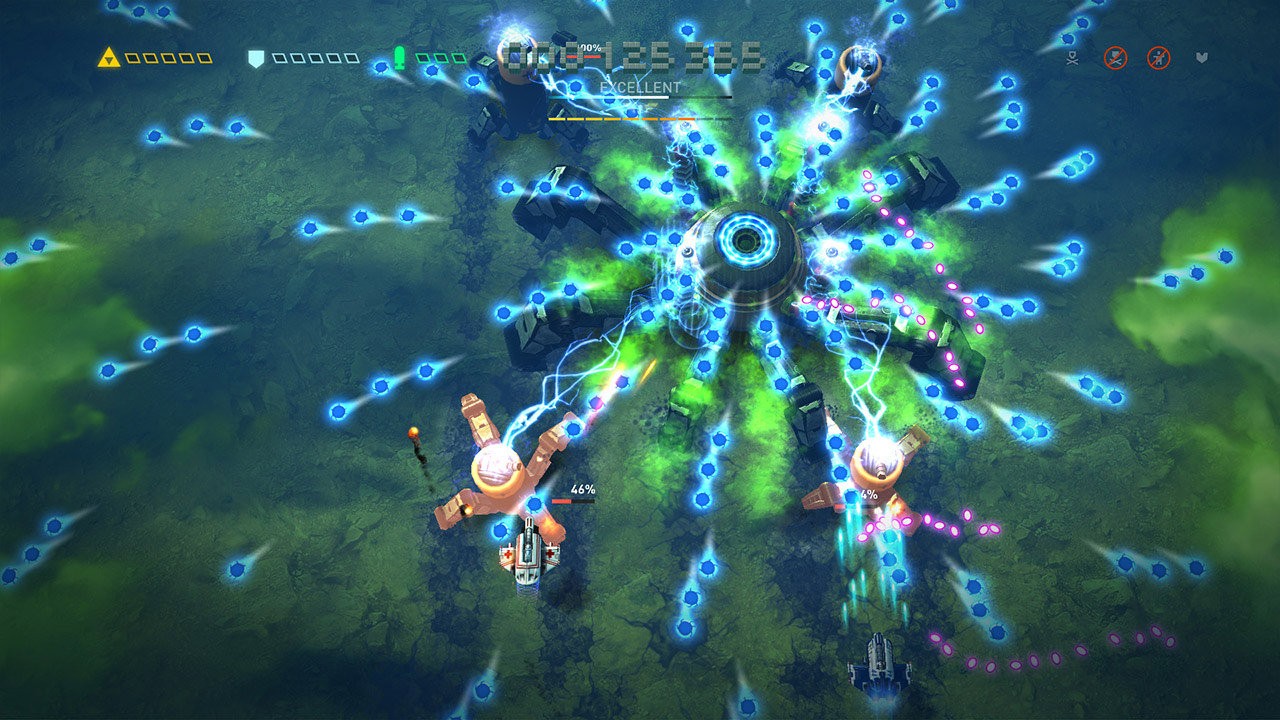 The final system that the game has is an “Objective” counter that tracks different stats and awards you gems to unlock technicians. While the objectives aren’t necessarily difficult, the amount required becomes asinine. The first objective starts off with you killing 1,000 enemies, but then balloons out to 10,000 and then 100,000. The technicians you unlock will have a random effect during a level, such as one guy using power-ups whenever he feels like it, but I don’t think I need to point out how useful a random effect is.

That basically sums up my whole time with Sky Force Reloaded, too. Stuff happens because the game decides it wants to, not because you’re actually leveling up or getting any better. With so many different factors being randomized and the grind to even unlock extra levels taking so much time, Sky Force Reloaded feels more like a time sink than a legitimately fun game.

The very core of the experience, which is flying around and shooting, is pretty polished at least. Your ship controls well, even if the Switch’s extra buttons aren’t put to any use (fire is ZR, but your power-ups do not use the other shoulder buttons). The graphics are also quite nice, sporting a kind of cartoony look with some great particle effects. For some odd reason you can’t use the Switch in portrait mode, but the game accommodates by actually supporting a widescreen aspect ratio.

That being said, nice graphics don’t make up for a rather boring game. At least co-op is supported with split joy-con functionality, but I can’t see inviting someone to experience mundanity with you. I also have no intention of ever returning to this game, which is probably the harshest thing I could possibly say. All the groundwork is there to make for a fun time, but Sky Force Reloaded squanders its potential and simply shoots for decent. That is a true shame.

Our ratings for Sky Force Reloaded on Switch out of 100 (Ratings FAQ)
Presentation
60
Sky Force Reloaded looks nice and has decent sound effects. At least when you get bored, your eyes and ears won’t be wishing to be plucked out.
Gameplay
35
The very basic gameplay of Sky Force Reloaded isn’t bad, just the pacing of the affair and how grind heavy all of the aspects are. The randomization of some unlocks is also infuriating.
Single Player
40
You’re looking at a lengthy campaign due to how poor the balancing is. There are different difficulties, too, so players who enjoy the game have a lot to experience.
Multiplayer
70
Sky Force Reloaded features co-op for each level and even split joy-con support. Getting another friend to join you is easy.
Performance
90
There isn’t anything to complain about performance wise. Sky Force Reloaded looks nice and runs well with no noticeable hiccups.
Overall
55
While not terrible, Sky Force Reloaded asks too much of the player with too little to give back. With some reworking to the exorbitant grind, I would maybe recommend this, but there are far better shoot 'em ups on the Switch that deserve your time and attention. 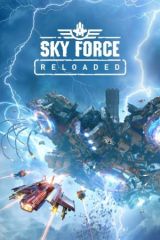