While most of the Steam indie scene focuses on puzzles and platformers, there’s also a wealth of interest in creating sports-like experiences. From direct adaptations of sports rules to the more creative approaches, variety is plentiful. Strikers Edge is one such title, the debut from developer Fun Punch Games, hoping to entice players with a fast paced and strategic game of lethal weapon throwing. It’s focused on individual skill with just 1v1 and 2v2 match options, and sports a fairly typical indie pixelated look with a top-down perspective. 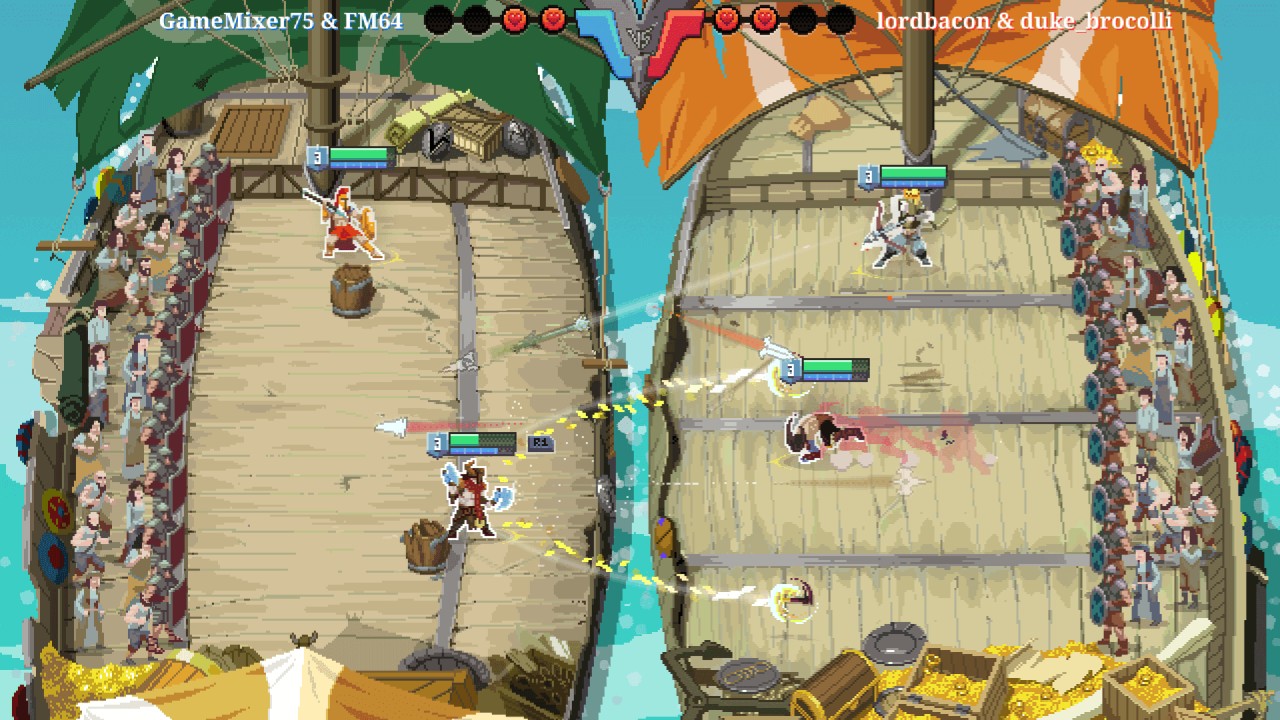 At the core of the experience lies the central game mode, which plays like a deadly version of dodgeball. Taking place in a small arena, the matches see two or more players taking up a position on either the right or left side of the screen, with a middle divider of some sort preventing them from crossing over. The objective is to hurl your character’s weapon of choice at the opponent, in hopes of reducing their health to zero. The controls are straightforward – move around with the keyboard, click left mouse button to throw, right button to block, and press Space to dodge. You do have a stamina meter that depletes when you throw and dodge, and you can only block 3 times per round, so it’s important to keep an eye on. Dealing headshots results in extra damage. There’s also the option to charge up your attack and perform a follow-up special move, such as throwing a spear with great force, and then igniting the ground in its flight path. The person to win best of 3 rounds takes the match. It’s a solid foundation for a sports-like game.

It definitely takes time to become proficient at not only aiming your attacks, but also being on the lookout for incoming projectiles. The game’s controls are seemingly purposefully imprecise and characters don’t throw or stop moving instantly, so it becomes more about anticipation and strategy than precision or reaction time. When it clicks, and you’ve learned to both keep an eye on your positioning and perform good throws, Strikers Edge can be pretty intense. The matches try to add variety with some obstacles such as rocks that can be broken overtime, and the last-second escape move that automatically slows down time if you’re in danger of a fatal blow. Also the thrown items can collide and cancel each other out mid-air. 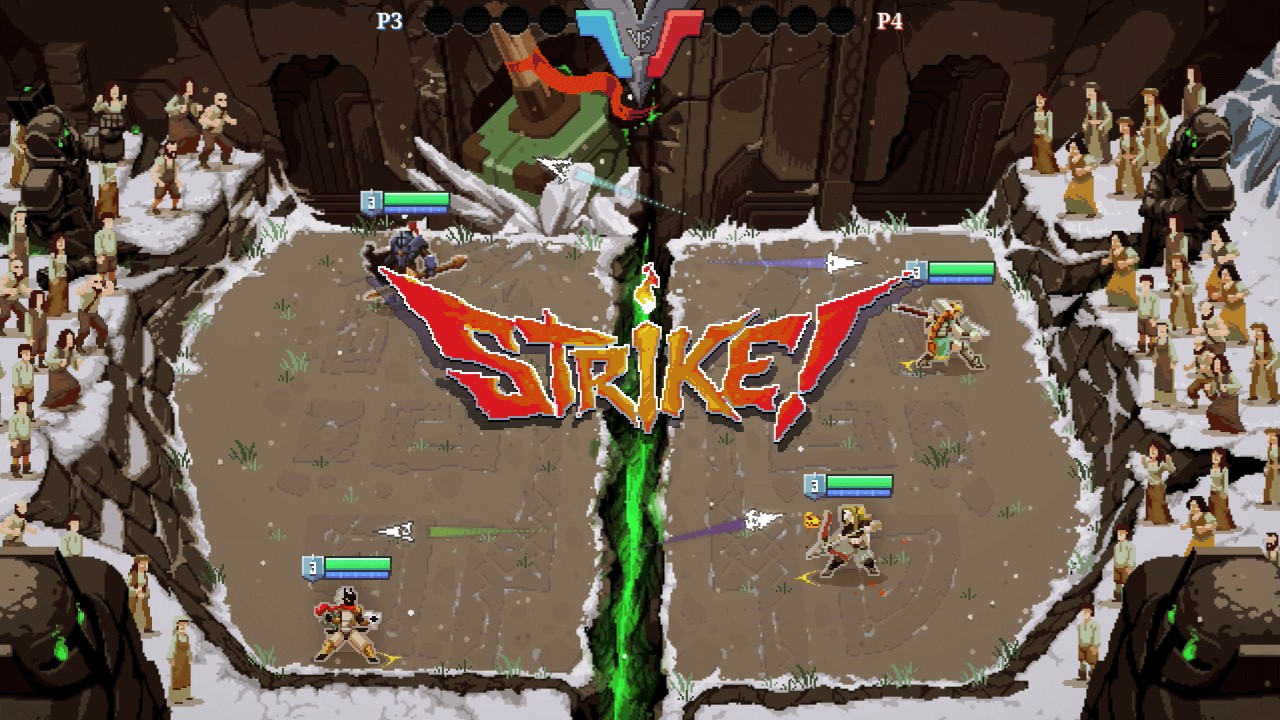 But after a while, things do grow tedious. Matches, especially the 1v1, can drag on if both opponents are at least decent at dodging and not very good at timing /aiming their throws. This deadly dodging game is the only mode on offer and is fairly barebones. Players can toy around with the roster of varied heroes on offer, which include knights, ninjas, barbarians, and other warrior types. They differ in the sort of items they throw, but not in speed or damage; they also have unique specials. The charged-up attack of the barbarian throws a chain, the witch can freeze players, and the knight can reflect attacks back across the field. You’ll have to discover all these mechanics on your own, though, as the game does not feature a tutorial or much in the way of explanations.

Perhaps you can get acquainted with these heroes through the game’s campaign mode, but it is fairly brief and despite offering some lore and text, and it boils down to a series of matches. It’s certainly a decent opportunity to practice with each hero, but it should be noted that on normal difficulty the AI is quite punishing, so dropping down to easy is advisable when starting out. There’s not much replay value or a story worth following.

When you’re ready for real competition, you can play in local 1v1 or 2v2 matches, or head online. While local play works fine, online is a bit troublesome, namely due to a complete lack of players. The game has been out for less than a month, and unfortunately the player population peaks at less than 20 on any given day. That means you’re essentially out of luck if nobody is online, and pre-arranged scheduling is pretty much a requirement. It’s too bad, because the few matches that we did manage to complete online (after 30+ minutes of waiting) were decently entertaining and without any connection issues. So, it seems that Strikers Edge should be safely considered an offline-only experience. 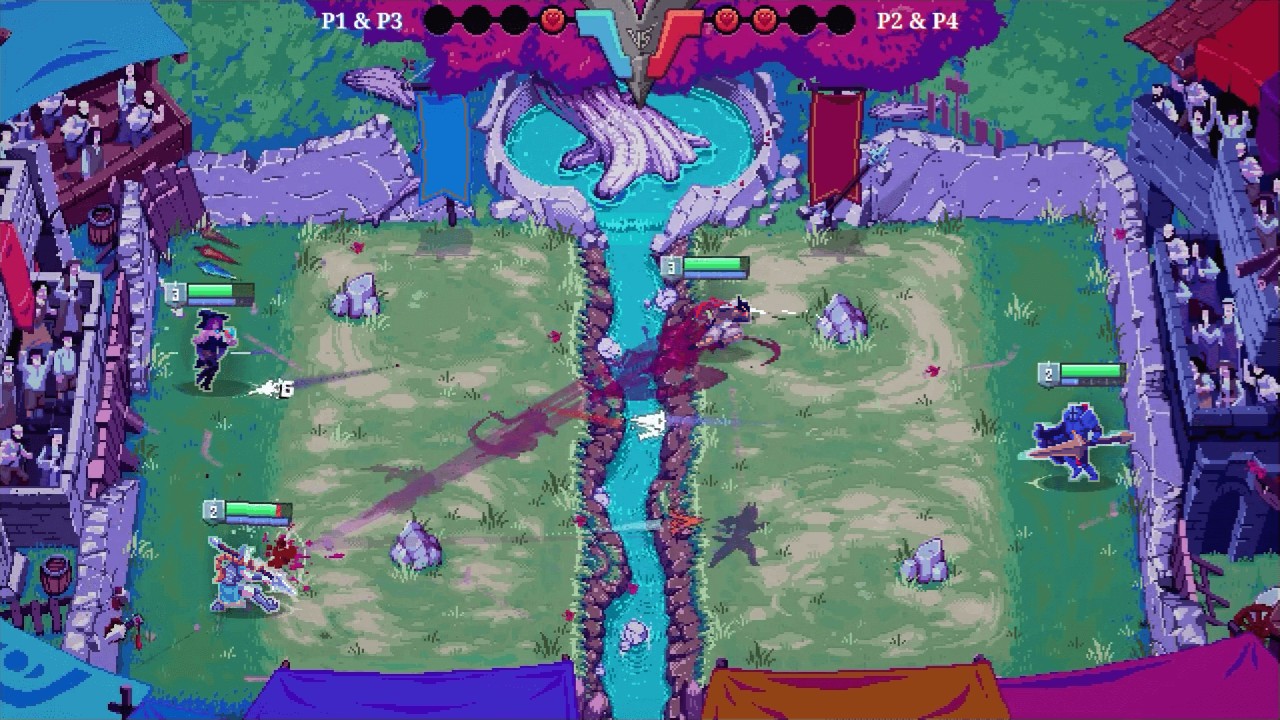 As with most smaller releases these days, Strikers Edge features a pixelated art style and a matching soundtrack. It’s a nice enough looking title for the chosen visual category, with solid character designs and animations. Still, if you spend any time at all on Steam you’ve likely played many games that look like this before. The soundtrack consists of a few chirpy tunes, which sound fine and do a decent enough job of blending into the background and not becoming too repetitive. There are only a few specific display resolution options to choose from, and the game runs with no technical issues.

Strikers Edge has some decent foundations, and its core gameplay can produce some intense matches, but things do become a bit monotonous after a while. It’s clearly meant to be a skill-based party game, but with a lack of comprehensive explanations for hero abilities and floaty controls, it never reaches those aspirations. The campaign mode is brief and the AI is punishing, yet the presentation is serviceable. The end result is a one-trick pony with limited appeal and essentially no online multiplayer, which makes its $15 asking price a bit too steep.

Our ratings for Strikers Edge on PC out of 100 (Ratings FAQ)
Presentation
65
The presentation is serviceable, with a nice enough art style and a few decent music tracks.
Gameplay
70
The game has all the core elements to make for fair and tense encounters. However, it can get old fairly quickly and there are no other modes or gameplay modifiers to spice things up.
Single Player
40
A series of battles against challenging AI with occasional bits of text. Could have used more tutorials for each hero type.
Multiplayer
50
While functional, online population is non-existent. Friends are required if you're looking to play against humans and not spend an hour in matchmaking.
Performance
(Show PC Specs)
CPU: Intel Core i5-4670K @ 3.80 GHz
GPU: ASUS Radeon R9 280X DirectCU II
RAM: 16GB DDR3
OS: Windows 7 Professional 64-bit

90
No issues
Overall
55
Strikers Edge has some decent mechanics at its core, but a lack of gameplay modes, short campaign and deserted online scene make this essentially a barebones local multiplayer title with a high asking price.