A portal to a different kind of puzzle game

Bridge Constructor Portal is a Portal-themed bridge constructor game, not a bridge-constructor themed Portal game. This is an important distinction for fans of Valve’s formerly dormant IP; you won’t actually be placing any portals in this game, though you will be interacting with them, and other recognizable Portalisms such as companion cubes and propulsion gels. Bridge Constructor Portal isn’t a particularly good Portal game with a disappointing humor deficit, but taken on its own merits there is still a pretty solid puzzler here. 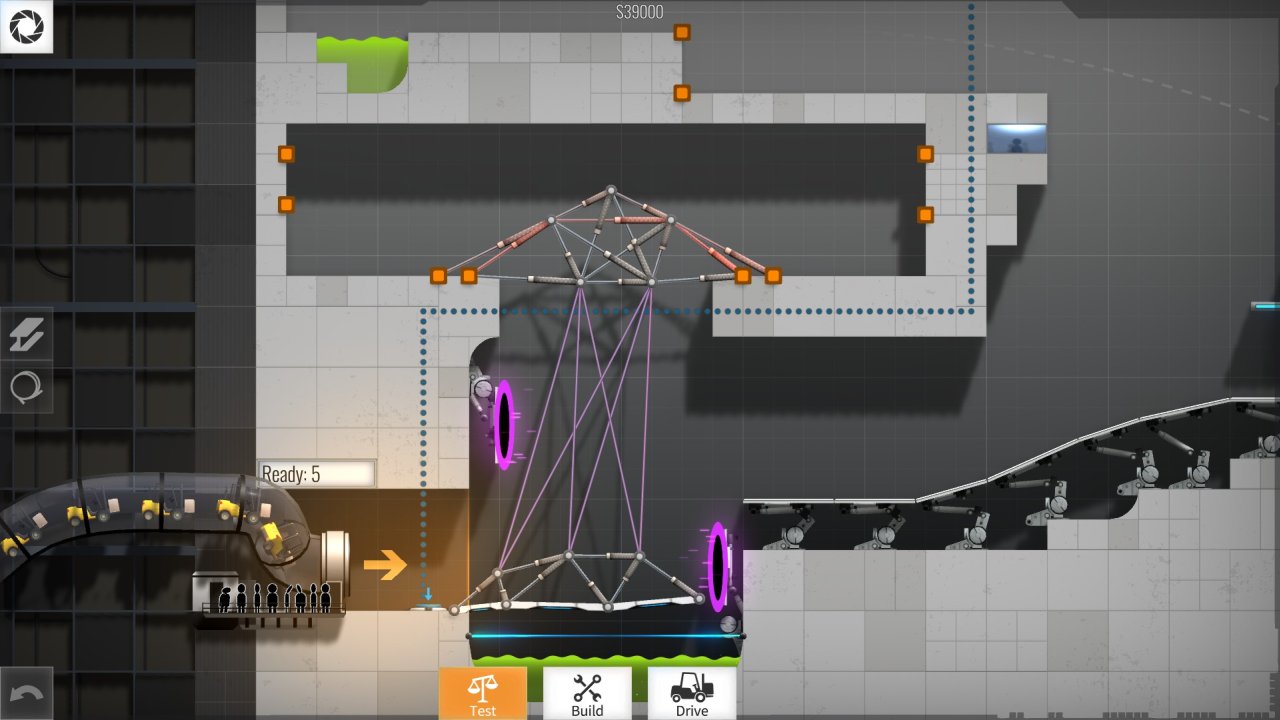 Mostly, your time with Bridge Constructor Portal will be spent in two-dimensional test chambers building bridges that allow Aperture vehicles to move from an input tube to an output tube. As with the previous Bridge Constructor titles, you have access to metal pylons that can be linked together and converted into road surfaces, and steel cables that can be used to support said road surfaces. Functionally, the entire game consists of futzing about with these two building materials to configure a variety of bridges and ramps that will allow the test vehicles to avoid lasers, acidic goo and various other obstacles so that they might make it to the exit of the level. To pass each level you only generally need a single vehicle to make it to the output tube, but if you want a challenge you can test your constructions with a multi-vehicle convoy that makes things significantly harder.

The framework for this purely scientific endeavor sees you playing as a new Aperture Science hire, and you must work your way up the ranks by completing a series of bridge-based test chambers. The story elements are extremely minimal, with a handful of short cutscenes and occasional interjections from the returning Glados failing to provide even a fraction of the humor that was so effective in previous Portal games. Fortunately, the developers must have realized that writing wasn’t their strong suit as it is largely unobtrusive with the puzzles themselves taking center stage.

Although I was somewhat disappointed when I learned you don’t actually get to place portals yourself, the gameplay elements from this series are ultimately used quite effectively. Portals are located in various spots throughout levels, with multiple portal pairs being distinguished with matching colors for the input and output. Many levels see vehicles going back and forth across the screen such that the paths of bridges intersect, forcing you to create carefully placed jumps and gaps in your constructions. 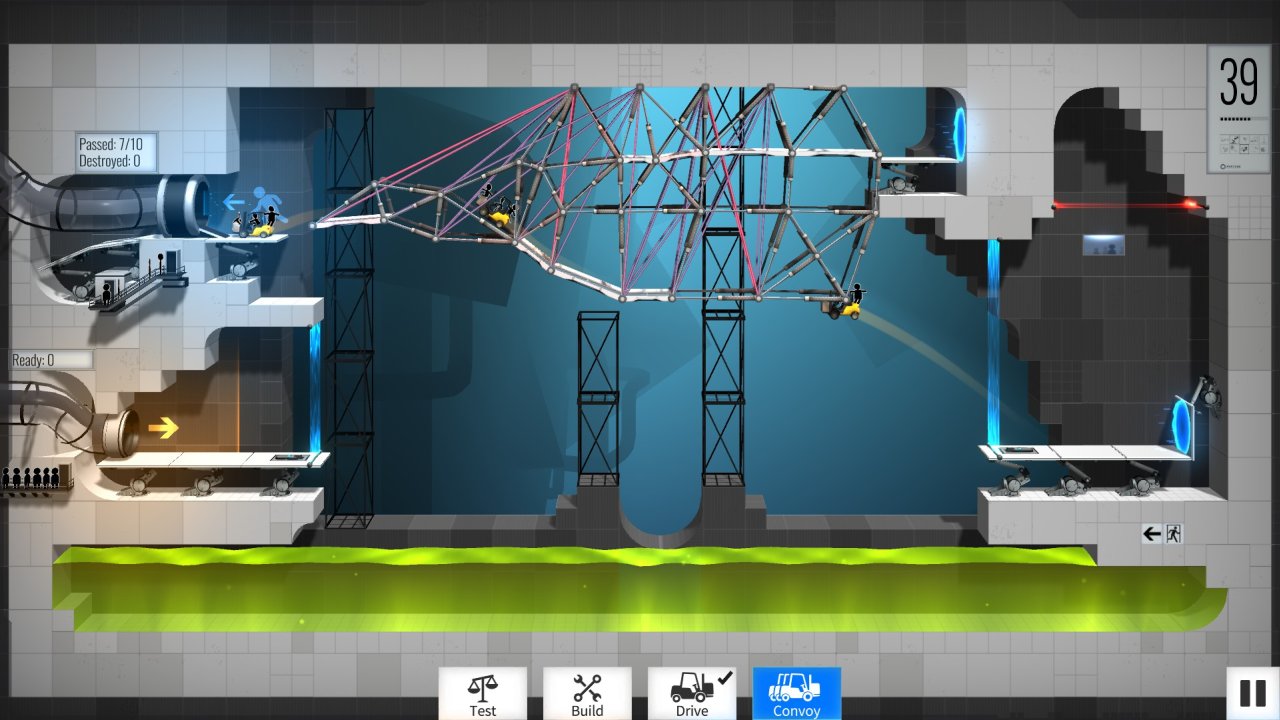 In other cases, you will need to route vehicles so they drive over buttons which open doors or release a companion cube that in turn might be used to knock over a turret or activate another button which might turn off a laser or open a door. Another mechanic involves energy balls which, like the vehicles, must be routed from their output port to an input port to allow your vehicles to pass; though these energy balls have the added complication of destroying any vehicles they come into contact with. Speed-enhancing and bouncy gel surfaces also appear in some levels, which lead to some of the most fun testing in the game as you send convoys speeding or bouncing all over the place.

Some of these mechanics mean that you are often creating structures that will cause companion cubes or energy balls to bounce in a certain way so that they reach their intended destination. In some cases you will need to time everything perfectly so that by the time your vehicle reaches some obstacle, it has been cleared. As such you will sometimes need to find ways to slow vehicles down such as building speed bumps, but doing so excessively can cause pile-ups with convoys so a careful balance must be struck (sometimes literally).

While early levels are relatively simplistic and exist to familiarize you with all of these mechanics, they eventually become rather creative and elaborate. You might be initially flummoxed when looking at some of the later levels which might have half a dozen portal pairs and numerous buttons, turrets and laser walls to navigate through before finishing the level. One impressive aspect of the game is how it allows for flexible solutions. There were several times when I started working on a solution to a puzzle only to realize after some time that the intended solution was probably a bit different. Sometimes I had to abandon my early ideas, but other times I was able to make them work, sometimes sending my cars flying backwards into the exit tube by manipulating the predictable game physics and bypassing some components of the level. 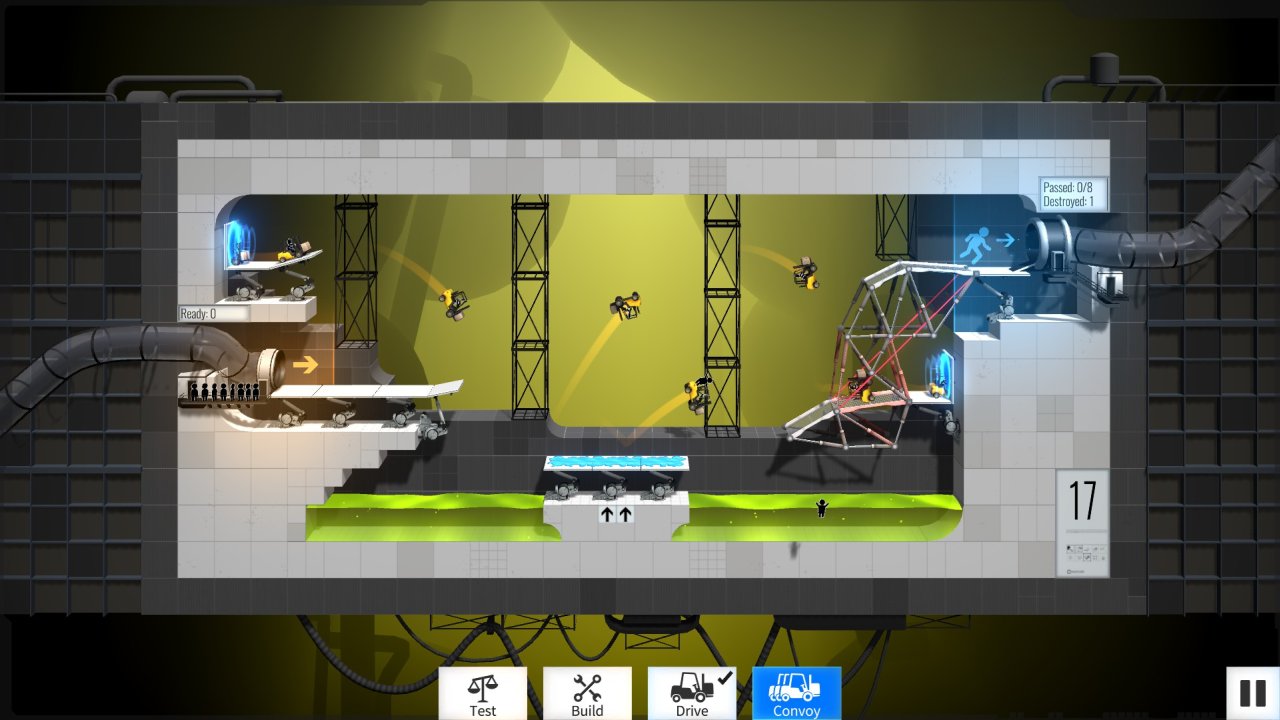 The most enjoyable parts of Bridge Constructor Portal for me were figuring out the routes through each level, some of which aren’t at all initially obvious. The actual process of building the bridges and structures can be a bit more tedious. Generally, you will have to spend a lot of time fiddling around with steel pylons and cables, using triangular configurations to strengthen your road surfaces such that they won’t break when a car comes hurtling through a portal at high speed before crashing into your haphazard landing ramp at a strange angle. Perhaps most annoying is getting the angles just right when bouncing energy balls into their input ports, or launching cars into a bouncy gel surface.

The vague tedium of constructing lengthy bridges is exacerbated by a control scheme that was clearly designed with mobile devices and touch screens in mind. You literally do everything with the left mouse button if using a keyboard and mouse. You single-click to start adding a new component, double click to remove it, click once on steel pylons to turn them into road surfaces and click and hold to move one of the end points of a pylon or piece of cable. Given how dense the placement of cables and pylons becomes in some levels, this can make for some frustrating mis-clicks, though fortunately there is an undo button.

Visually, Bridge Constructor Portal does a good job of evoking the look and feel of past Portal games but on a 2D plane with clean looking environments and crisp audio. A lot of sound assets from the original Portal games are used here which helps make this feel like a more genuine tie-in. The soundtrack is fairly low key, becoming louder and more up-beat when testing tracks, then almost disappearing entirely at times, with audio honestly not playing much of a role in general. 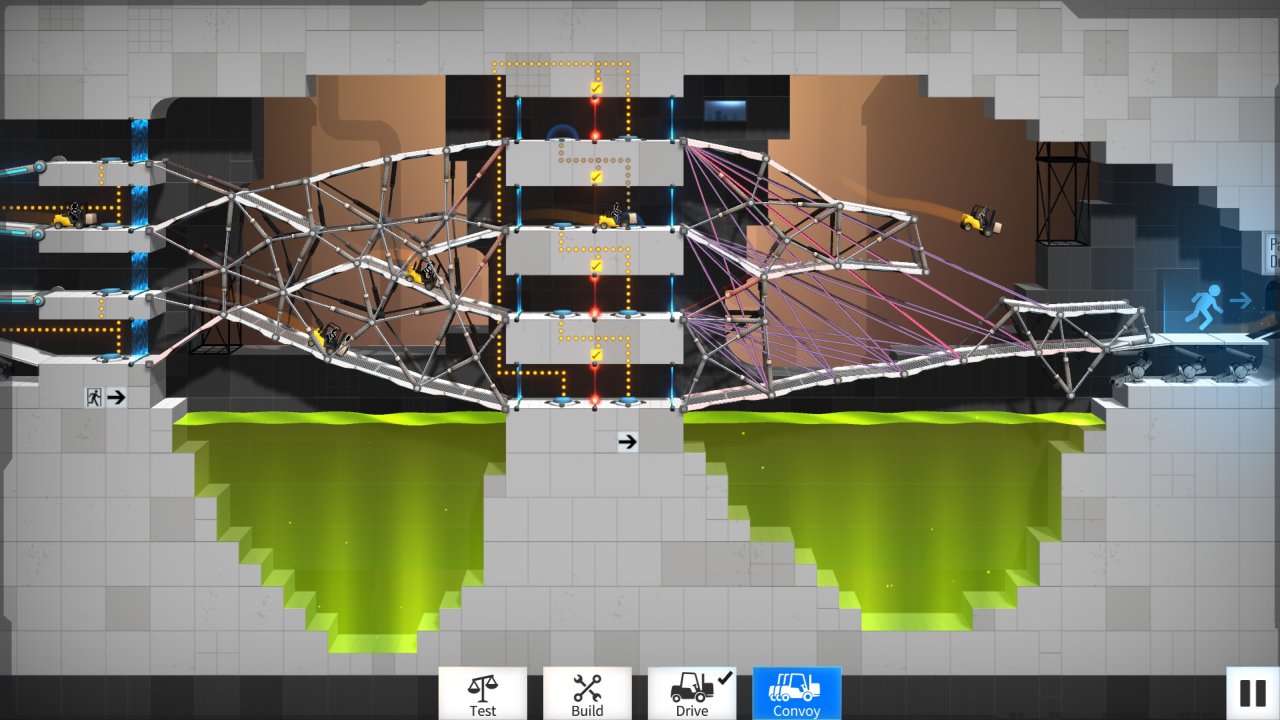 Bridge Constructor Portal is a well made bridge-constructor puzzle game that uses the Portal gameplay elements fairly effectively, but lacks the quality humor of this series. However, the puzzles are varied and clever enough to comfortably prop up the entire experience, even if the actual bridge-building part can be a bit finicky and tedious at times. At such a low price, I wouldn’t hesitate to recommend it to anyone in the mood for a straightforward but well executed puzzler.

Our ratings for Bridge Constructor Portal on PC out of 100 (Ratings FAQ)
Presentation
67
The clean white-heavy look and sound of the Portal games is effectively replicated on a 2D plane, though the original soundtrack fails to make much of an impression.
Gameplay
68
There are only two bridge building components, but you will need to use them in a lot of creative ways in conjunction with environmental elements returning from the Portal series. The mobile-game DNA results in a less than ideal control scheme for the keyboard and mouse.
Single Player
75
60 levels that increase in difficulty and complexity at a good rate, that should take 10-15 hours to complete depending on whether you try and pass each level with a single car or a convoy.
Multiplayer
NR
None
Performance
(Show PC Specs)
CPU: Intel i7-6700k @ 4.0ghz
GPU: Nvidia GTX 1080 8GB
RAM: 16GB DDR4
OS: Windows 10 Pro 64

90
The game runs flawlessly, some minor physics glitches here and there
Overall
71
Bridge Constructor Portal successfully melds bridge-building with classic Portal gameplay elements, though it fails to emulate the excellent humor of that series. Good value and creative levels with more than one solution make it a slick package for anyone looking to relax while using their brains a bit. 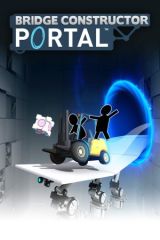