Sweep it back under the rug

It can’t be easy, being a virtual set-dresser. For as long as games have provided us with occluded views of their worlds, we’ve wondered jokingly about the plights of the theoretical people who exist just out of frame, preparing and maintaining the spaces we pass through. We pity the poor minimum-wage janitors who have to mop demon guts off the UAC’s floors, question aloud who keeps the torches lit in the sealed crypt’s halls, make up stories about the invisible hands that put the flags back on their podiums, push the crates back into position, and replace the smashed pottery. We’ve seen a few games that explore these premises, like the oddly relaxing Viscera Cleanup Detail, and as I thumbed my way through my backlog of missed games to cover during the slow, relaxing release period that we know as December, I spotted another game about the joys of working in the hospitality industry: Serial Cleaner. 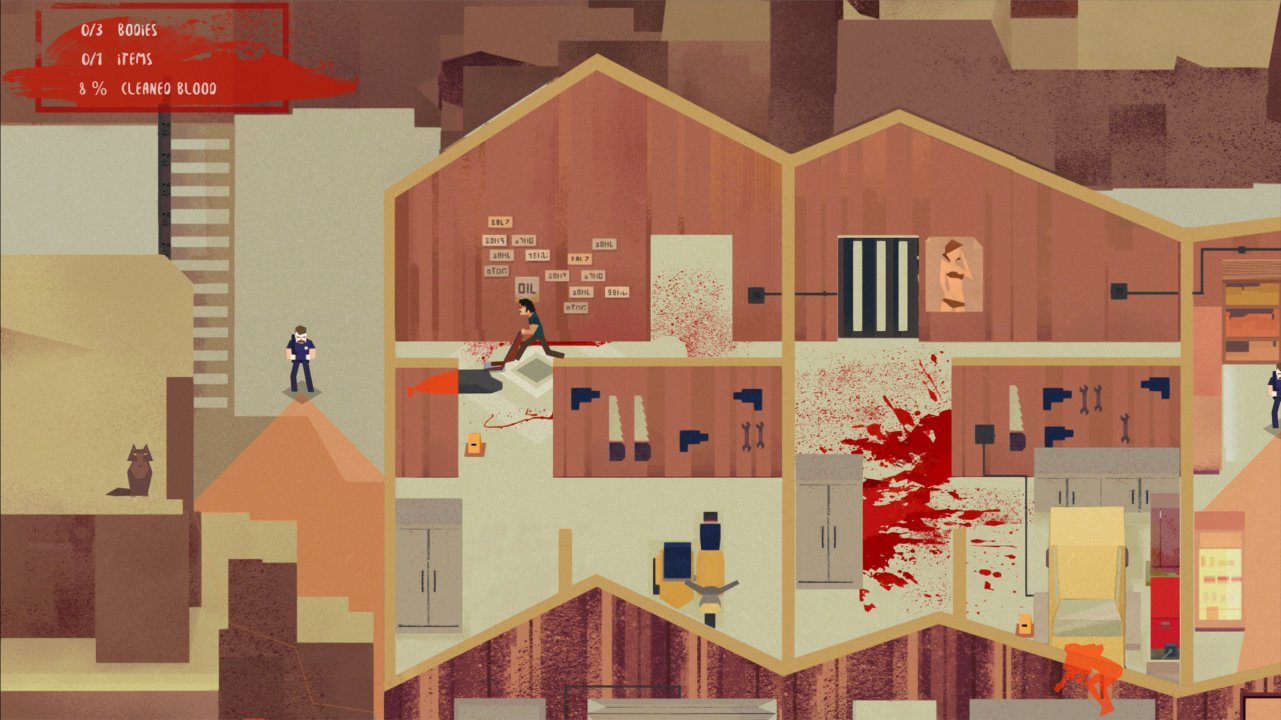 To the surprise of nobody, you are a cleaner—of the illicit blood-mopping and body-bagging variety, that is. It’s the seventies, the decade of disco, slap bass, breathtakingly misguided interior design, and... lots and lots of murder, apparently, judging by how much work you get. So great is the demand for your evidence-erasing skills that you’re able to work freelance, which I didn’t know was a thing in the world of crime-adjacent janitorial services, but sure, whatever pays the bills for you and your dear old mum. Of course, crime doesn’t pay—and neither does helping criminals get off scot-free, which is probably a double-crime—so it’s only inevitable that you get tangled up in dangerous business sooner or later. But first, it’s time to play ring around the rosie.

A good cleaner is discreet, so naturally, the challenge is stealth. Each mission has a multitude of cleaning targets—evidence to gather up, bodies to haul into the back of your horrid station wagon, that sort of thing—and it’s up to you to get in, get them done, and get out. Don’t worry about finishing your work before the cops show up, either—they’re already there, and they’re not likely to bother with questions. Hitman this ain’t; you’re vulnerable, you’re unarmed, you stick out like a fursuiter on the five o’clock commute, and—also much like a fursuiter—you’re not going to outpace the authorities for more than a few seconds at most. This is a game of pure evasion, and preferably, not being seen at all.

Hmm. That’s already iffy enough from a design philosophy perspective, and Serial Cleaner doesn’t do a whole lot to defend its position. It feels like an attempt to make a very condensed, no-nonsense top-down stealth experience—the sort we’ve seen work out in Monaco, or to a certain extent, Volume—but in its haste to trim down an often-overgrown formula to its barest necessities, Serial Cleaner comes out the other end clutching a rather sorry, dead-looking piece of topiary. There’s no opacity or ambiguity to anything; it takes a handful of systems, strips them naked, and lays them bare and shivering in the open, to be manipulated by your sordid fingers. Enemies patrol back and forth with highly visible, sharply delineated vision cones, and putting so much as a toe inside a cone will result in them immediately chasing you down on full alert to deliver a healthy beating. If you manage to break line of sight, even momentarily, they’ll stand on the point where they last saw you, glance around for a second, and go back to their route as if nothing ever happened. 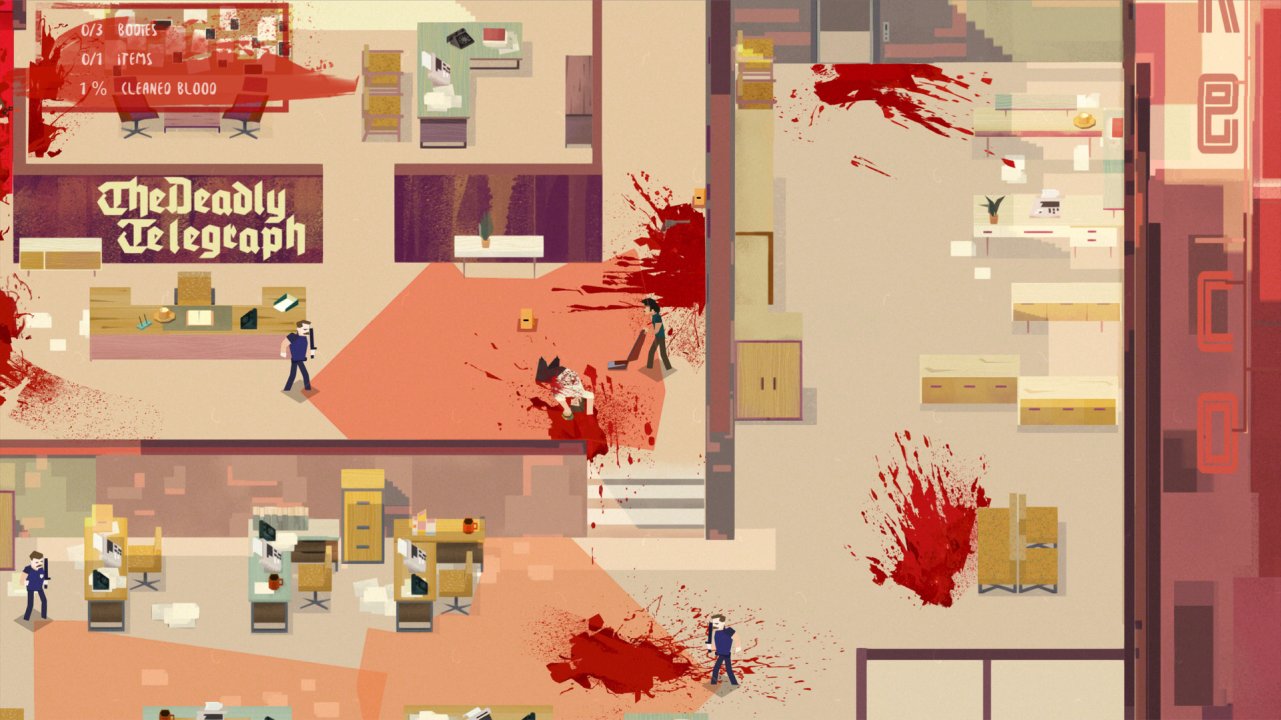 Hidey-holes are frequently scattered around levels—cardboard boxes, clusters of barrels, potted plants—and if you dive into one then the guards’ll be utterly flummoxed, even if they were staring right at you as you did it. These elements all work together cohesively, no doubts there—the hidey-holes would be next to useless if guards could actually investigate them, given that they’re nearly always breathing down your neck—but the experience they cooperate towards is so binary and one-dimensional that for a while it actually threw me. “Am I missing something? What is this even going for? Is this Hotline Miami? How many aeons have I s-l-u-m-b-e-r-e-d?”

Serial Cleaner is not Hotline Miami, of course. While both games share a fondness for punishing tiny oversights with sudden fail-states, Serial Cleaner’s levels quickly balloon in size and length to the point where a satisfactory die-retry-die loop no longer really feels possible. I don’t mind telling you, it’s ruddy frustrating to get an entire map gleaming only to have to start again from square one because I brushed the edge of a vision cone on the way back to the car. After a reset or two it’s easy to get impatient, and impatience frankly doesn’t suit a game so heavily centred on waiting for patrol patterns. If you fancy being a bit more proactive, there are environmental features for distracting and manipulating guards—generating sound, moving objects back and forth to close off routes or open up new ones—and yes, it’s kind of fun to hem in a copper with picnic tables and watch him pace back and forth uselessly, but it doesn’t really feel like a creative solution when they’re so rigidly built into the level like this. You might as well leave me a lever that drops a giant iron cage on him.

That’s not to say there aren’t interesting ideas rattling around in Serial Cleaner’s cart, mind. One of your recurring objectives throughout the missions is to clean up blood, which tends to get spread around a bit when the mysterious voice on the phone gets his hands on a fire axe. Fortunately, with the help of your hardy seventies vacuum cleaner, you can clear that arterial splatter right off the map just by running hither and thither across it, like a child with an enormous eraser. It makes a nice change from the usual stealth fare of ‘steal everything that isn’t nailed down’ or ‘plant a knife between this person’s shoulder blades’, but it feels like the game never really does anything notable or spatially conscious with the mechanic. You’re never called on to clean up oddly-shaped patterns, or trails that could potentially lead you into a trap; they’re just seemingly random splatters that could be anywhere, go anywhere. There’s a certain mild satisfaction to moving back and forth over a patch with practised efficiency, ensuring you don’t have to go back and hoover up the parts you missed, but I could get the same sense of accomplishment from repainting my closet doors—and a more tangible reward, too. 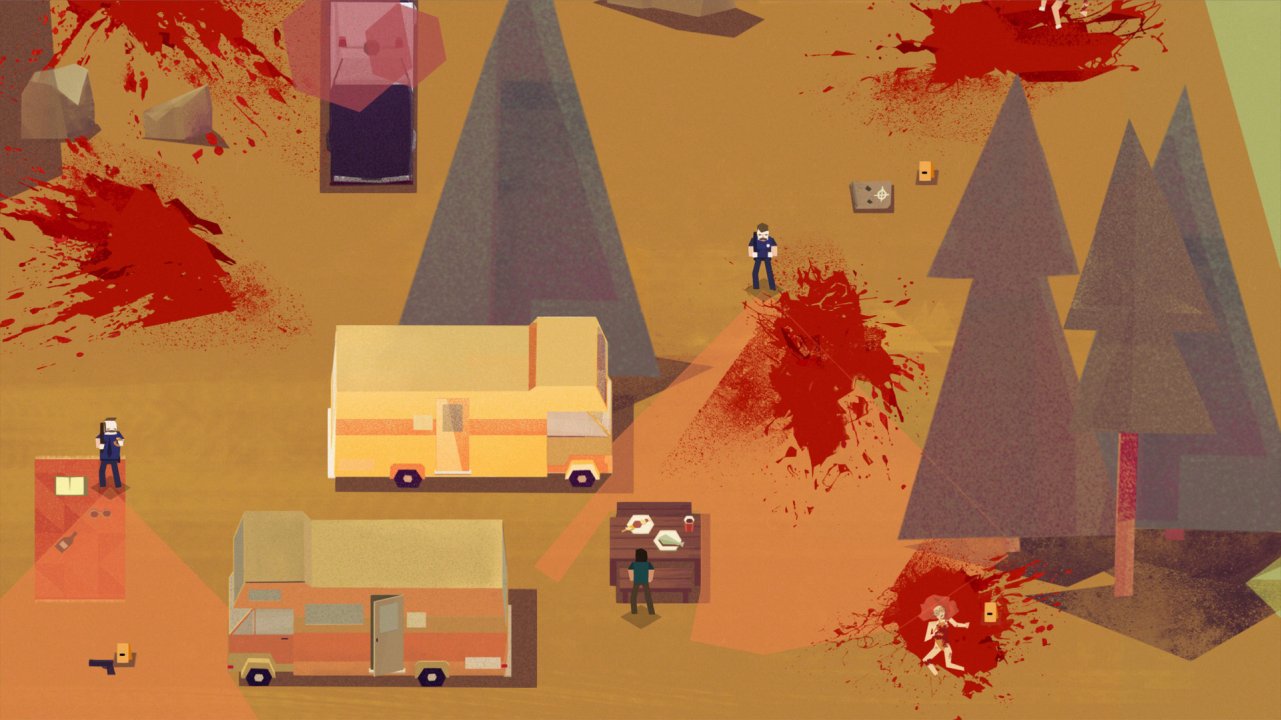 Another feature with the potential to raise anywhere between one and two eyebrows is the game’s usage of (ahem) ‘real-world data’. What this means in its entirety is a little unclear, but its primary effect seems to be that the levels match your system clock and follow a day-night cycle accordingly. As is always the case with this sort of mechanic, it feels sort of questionable to assume people have the luxury of choosing when they make time in their daily routine to play your game—one of those bothersome aspects of Animal Crossing that I’ve never been quite able to make peace with—but fortunately, or perhaps unfortunately, the differences are trivial at most. At night, the sounds you make are more audible—manifesting in a larger ‘noise diamond’ around your character—and the vision cones of patrolling guards are smaller. It’s a subtle detail, the sort I might call ‘cute’ if it was an appending flourish to a more healthily fleshed-out experience, but I’m not convinced the level design was always built with it in mind. At some points it’s physically impossible to get past a guard during the night because your noise diamond is wider than the margin of space you need to slip through, and your only options are to either accept that the route is a lost cause, or… wait until morning. Not exactly the most compelling dichotomy.

What is compelling about Serial Cleaner, though, is the downtime. Between the story missions are little vignettes where you sit around at home, check the newspaper, say hi to your mum, watch some television, and uh, organise your collection of stolen evidence. It feels wrong to think of them as isolated moments of normalcy, since the cleaner tends to keep a very level head even while working—a line of dry commentary for every corpse, that’s his guarantee—but they do help to reinforce that what you do is ultimately a mundane job, with a mundane home life to match. Your home is a backdrop through the years, subtly changing as homes do, playing host to the developing drama as you become gradually more deeply embroiled in the business of a mysterious anonymous client with an emergency department’s worth of blood on their hands. It also gives you a chance to really stop and appreciate Serial Cleaner’s visual design, which achieves the remarkable by making seventies wallpaper seem cool and retro rather than a potent cognitohazard. Everything in the game keeps a consistent focus on sticking to primitive, angular shapes, expressing the bulk of the design through strong colour palettes and patterns, almost like papercraft. There’s a subtle film-grain-style roughness to all the surfaces, in case you forget what decade it’s supposed to be, and there’s always just enough detail to pick out important character details, like your cool shades, moustache and enormous black mullet. 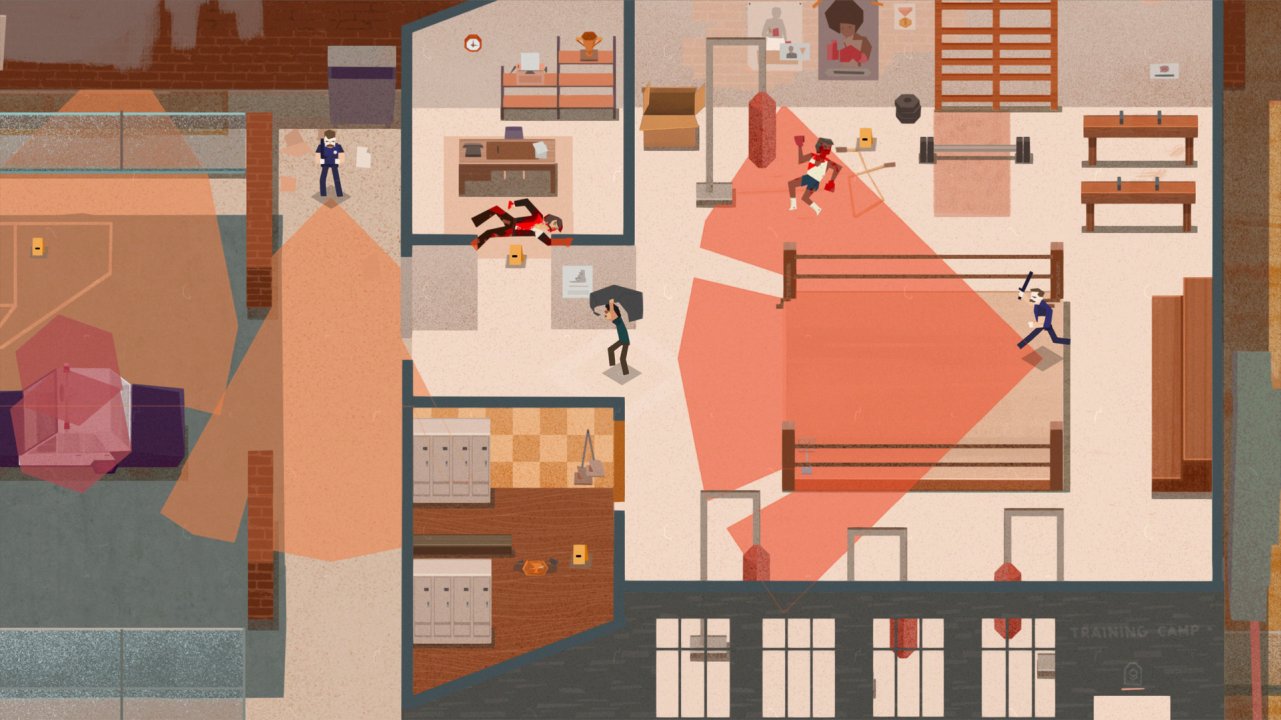 Serial Cleaner is a troublesome case. Each and every facet of it has been polished to a mirror sheen, and yet I find myself walking away from it feeling vaguely resentful, like we just went on a date and it spent most of the time talking about field of view sliders. It successfully constructs a coherent, functional, tight stealth experience where everything works in smooth tandem, but the experience in question is a drab, miserable chore that boils away everything I enjoy about stealth games. Your nerves will never sing like violin strings because there’s no time or space for tension, only plodding around waiting for guards to face the other way. You’ll never solve your way out of a tight spot with quick, creative thinking, because there are so few interactive elements in play and most of them are outright bolted to the floor. Even the so-called thrill of the chase, when and if it happens, is over within seconds, and within a few seconds more it’s as if it never happened at all.

What Serial Cleaner really needs, beyond anything else, is to be more messy. And irony doesn’t get more perfect than that.

Our ratings for Serial Cleaner on PC out of 100 (Ratings FAQ)
Presentation
81
Bold, stylish visuals married to a surprisingly funky soundtrack make for a helluva pair of rose-tinted aviator shades. It can be a bit tricky to parse what you’re looking at sometimes, mind.
Gameplay
34
Barren, clinical, squeaky-clean skeleton of a stealth experience livened up only by swift and unnecessary punishment. Has a few curious ideas up its sleeve, but doesn’t really do anything remarkable with them.
Single Player
65
It’s no writing tour-de-force, but the in-between bits at the cleaner’s house do a decent enough job of chronicling his downward spiral. It’s not too drawn-out, either, which is frankly something of a relief.
Multiplayer
NR
None
Performance
(Show PC Specs)
CPU: Intel i7-6700K
GPU: Nvidia GTX 1080
RAM: 16GB DDR4
OS: Windows 7 Premium 64-bit

83
Runs without complaints, loads swiftly, has an array of appropriate configuration options and—most impressive of all—lets you skip the splash intro screens when it starts up. Would be nice if you could customize the key-binds beyond just selecting a pre-selected scheme, though.
Overall
46
A polished, well-presented skin wrapped around thoroughly unremarkable stealth fundamentals. Serial Cleaner is not an actively antagonistic experience, just draining and unrewarding. 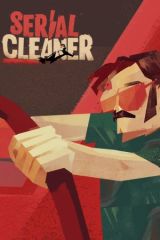