Guardians of the Galaxy Review

Going Knowhere fast, but having fun along the way

It's hard to tell what will happen to Telltale Games in the future. At the start of November 2017 they let go of 25% of their staff and finished their first season of Guardians of the Galaxy. Their loss of talent was unfortunate. Perhaps they expanded too quickly, or maybe their specific and unchanging narrative approach to games is little more than a flash in the pan. Are gamers tired of such interactive stories? The answer to that question might be found inside their latest complete release. Marvel's Guardians of the Galaxy: The Telltale Series is quite a mouthful, but how does it stack up as a game? If you have played Telltale's previous titles then there are no real surprises, and that could either be a problem or as reliable as an old friend. 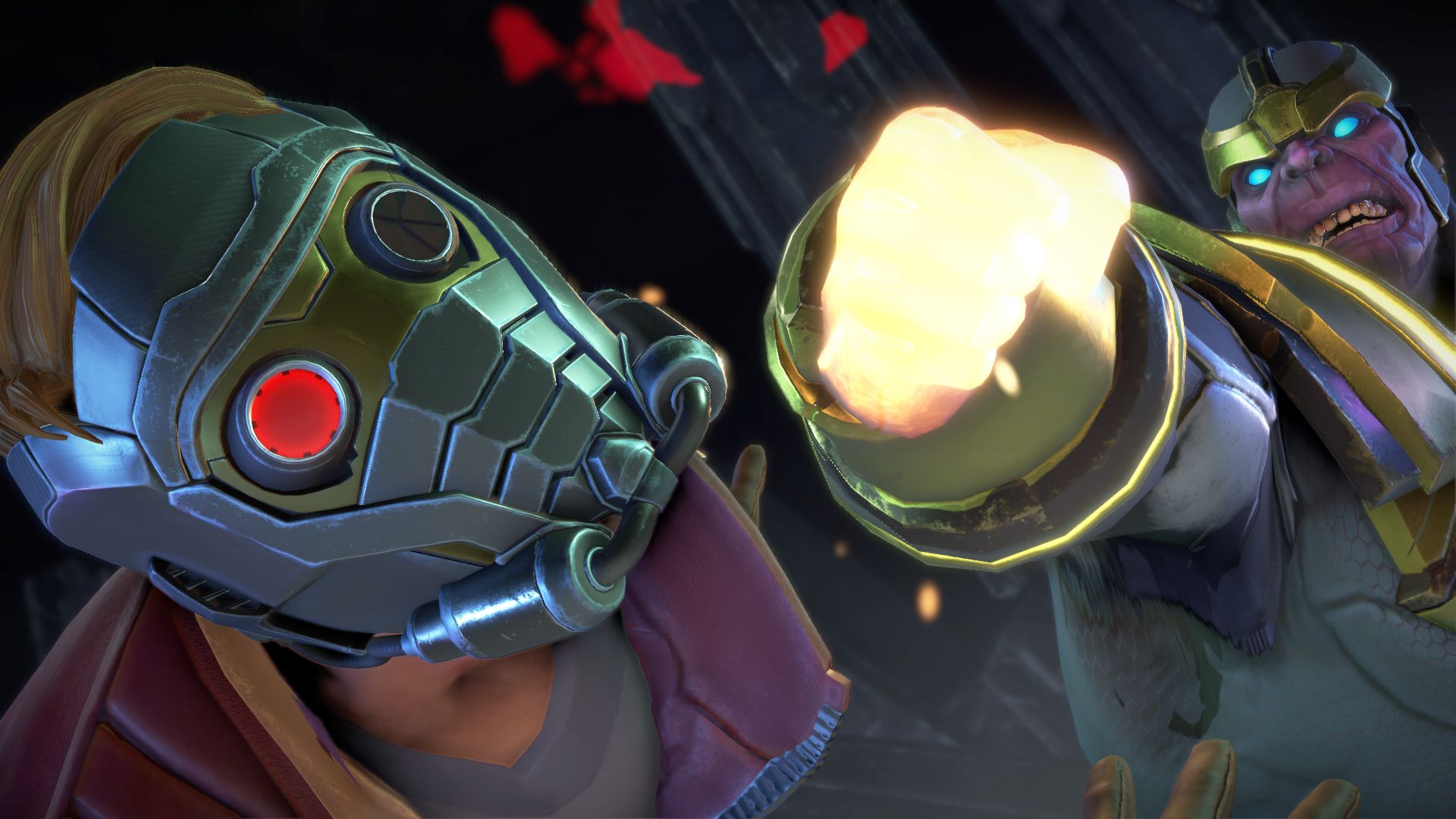 Guardians of the Galaxy is a big franchise, now that it has smashed the box office twice in the last four years. Telltale's own game is not directly related to the events in either movie. It does have many of the same characters, focusing heavily on the main crew of Drax, Gamora, Groot, Rocket, and Star-Lord. Others make an appearance, including Nebula, Mantis and Yondu. Like most of Telltale's other games, the full season contains five episodes that are heavy on dialogue and light on interaction.

You'll play as Peter Quill, aka Star-Lord, and will not have an easy job as leader. You have to look after a group of misfits that regularly disagree with each other and are happy to solve their conflicts with knives and/or screaming matches. Not only do you have to use diplomacy to keep your friends from killing each other, you often have to be the deciding vote on important matters. 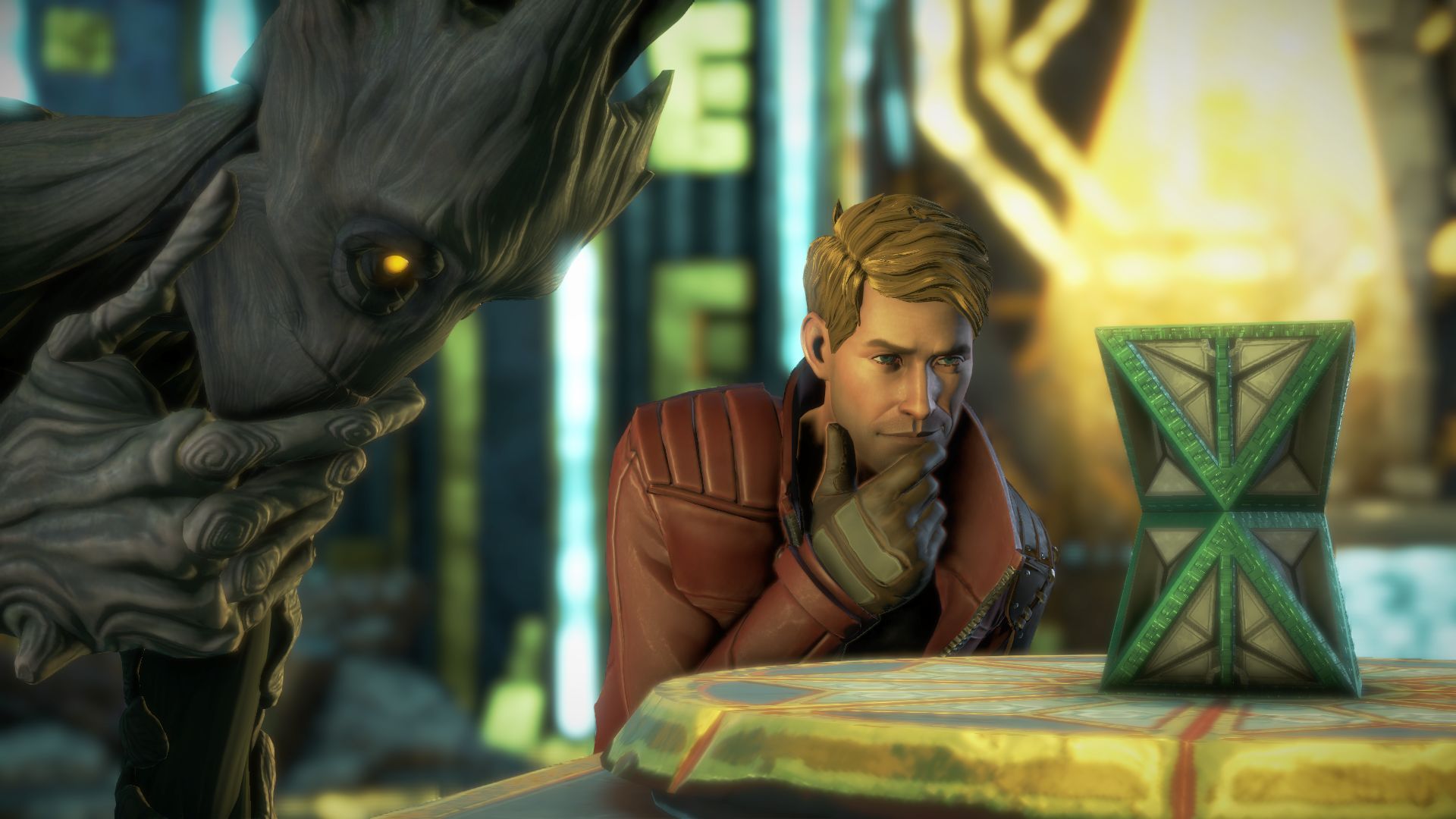 The fate of the Eternity Forge is in your hands

And what could be so important that it would split the crew? How about a powerful artifact, called the Eternity Forge, that can bring people back from the dead. For some, it's a chance to resurrect loved ones, but for others it's a massive risk to the galaxy. The ancient device is acquired from Thanos in the first episode, after the Guardians kill him in a nicely choreographed fight sequence. Yes, Thanos is dead for much of the first season, which is refreshing given the character's persistence in the movie franchise. His death causes turmoil for the crew, as now some lack purpose. But he gets replaced by a Kree warrior called Hala, who wants the Forge for herself and has the strength to take it. Not only do the Guardians need to stop her from getting it, they have to decide what should be done with such a magical item.

There is a lot of dialogue to sift through as the crew of the Milano (Peter's spaceship) travel from the trading outpost on Knowhere to unknown temples on unknown worlds. Much of it is up to the high standard of Telltale's previous games, although with the same types of problems. You'll have to take sides, and sometimes with a time constraint. This takes a toll, and it starts to feel as though you are fighting a losing battle against adults that act like children. And since most events unfold the same way, forcing players to decide regularly is a little unjust. These crew conflicts do add the required drama, though. 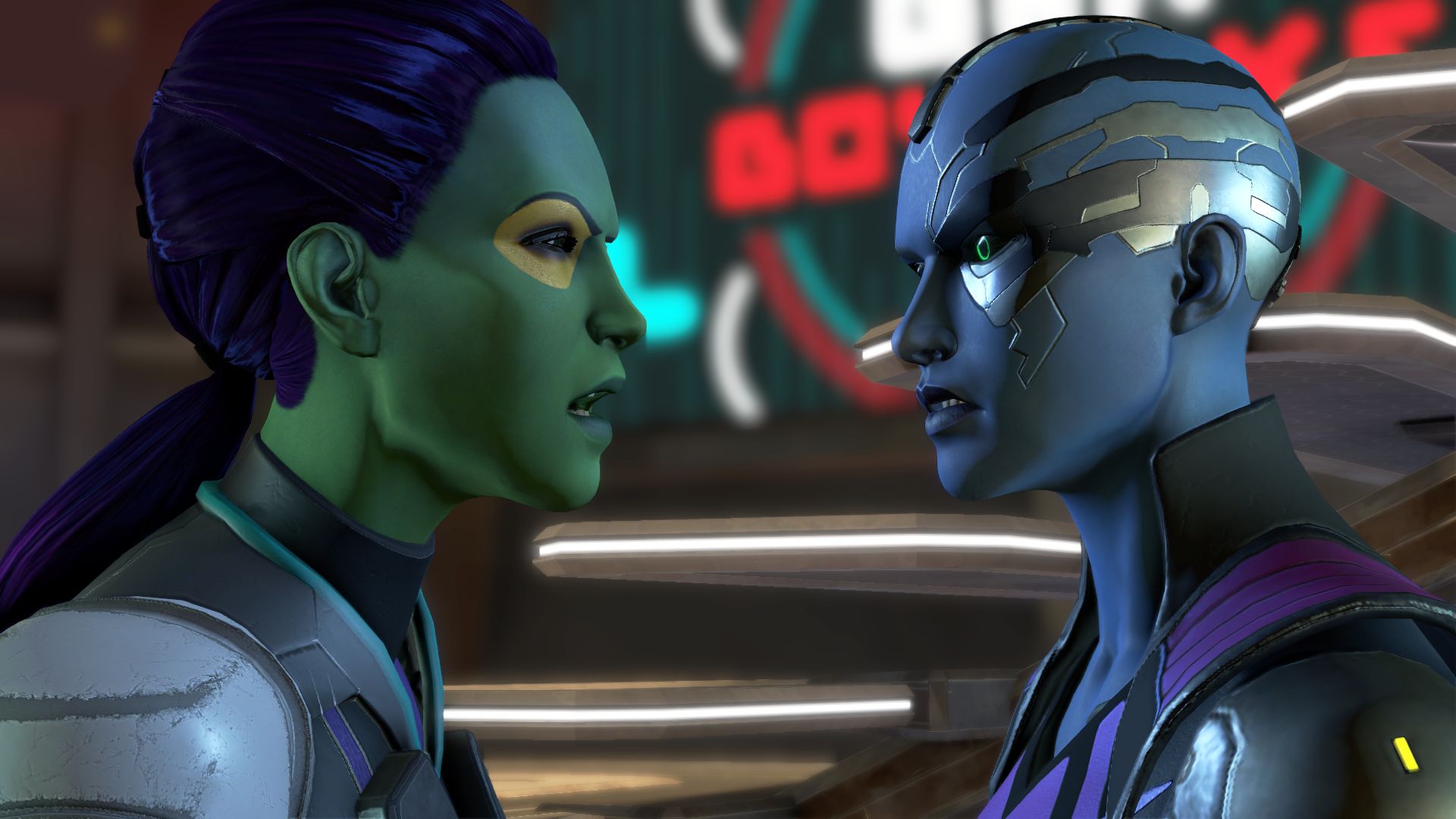 Gamora and Nebula argue, but you have a role in the outcome

Between the dramatic events of Star-Lord and crew, you'll get brief flashback scenes of Peter and his mother before she died. This approach is similar to the third season of The Walking Dead game, and even feels the same as you spend time in a car and in the middle of the woods. With the help of Mantis, you will also explore memories of your friends at pivotal moments in their lives. Reliving these past events is good for pacing and links well with the carnage happening in the present.

In the downtime between major events, you can walk around the Milano and freely talk to the Guardians. Maybe you'll help Gamora with her angry cyborg sister or talk about how visions of your mother are taking a toll. Drax is seeking purpose and Rocket is freakin' angry at everything, like usual. Groot is, well, groot. Talking to these characters is fun, even if the optional dialogue is minimal. There isn't a great deal to do around the ship either, apart from putting on some 80s tunes and checking the codex for information. The Milano is just a small area between places that could have been expanded more.

When you are not in conversation, the interactive elements are not much different from Telltale's last few games. That means you still have the QTE events where you need to duck around threats or hit a button to perform an action. The biggest change is that you will often perform actions as all members of the team, not just Peter. This works quite well and allows for some quick and compressed fight scenes. 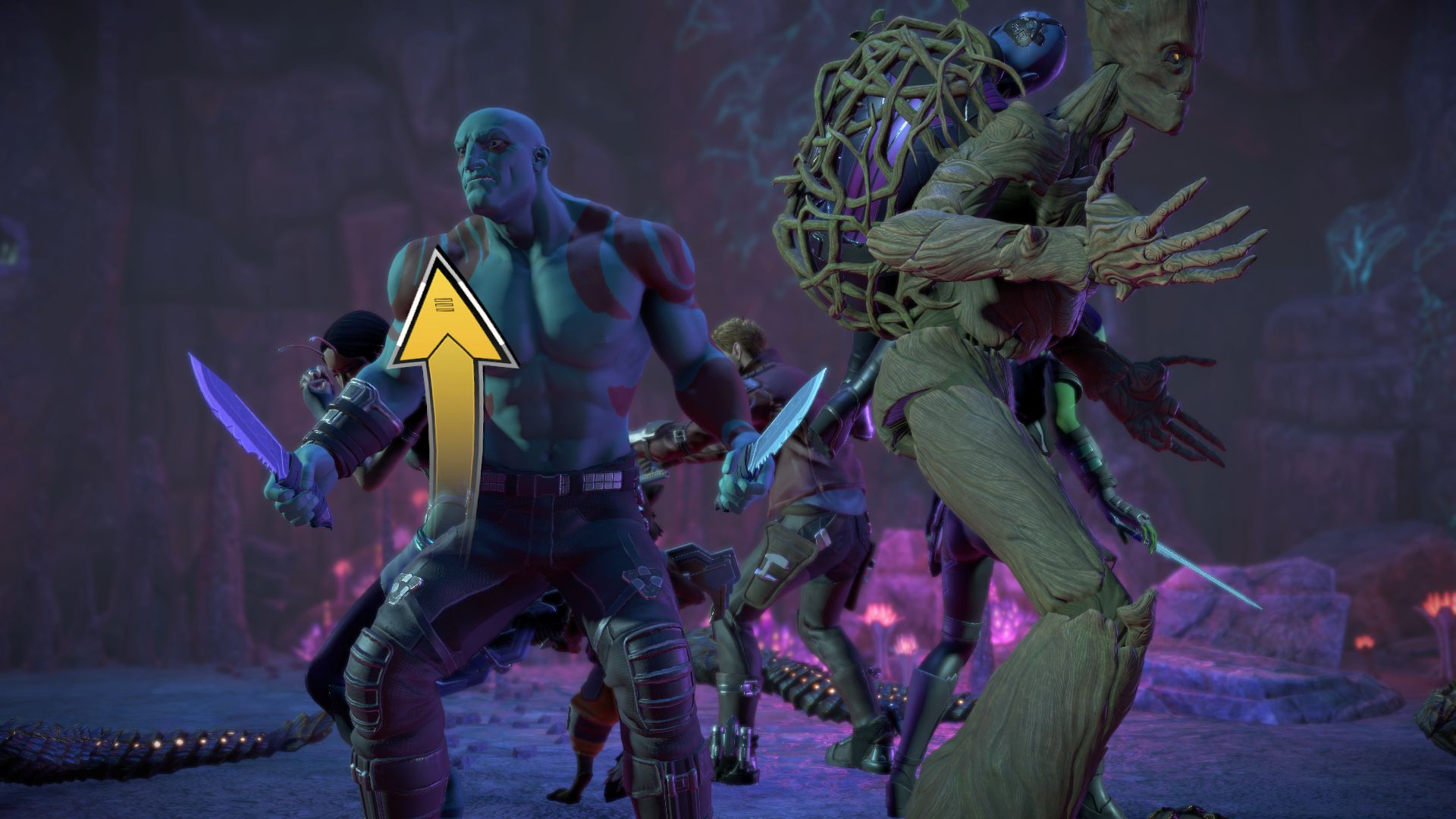 Action scenes have you playing as all of the Guardians

Unfortunately there are many shallow pieces of interaction as well. You'll be given control for mere seconds just to click on something, press a button, or walk forward a short distance. This can be seen when you place the Forge on an altar or stumble upon Gamora in a trance. Being handed control and then having it ripped away almost immediately is annoying.

Thankfully there are zones that allow leisurely exploration. Peter will search within the stomach of a giant worm and also in the ruins of ancient temples, to complete extremely basic tasks. He can use a radio to communicate with others, if they are not nearby, either to check on them or ask for help—unfortunately they only have a few lines of dialogue. One thematic change is that explorable areas are often multi-tiered, and this makes use of Peter's rocket boots to move up and down as required. The aerial movement isn't ground-breaking, but at least it tries to integrate the character's skills into the mechanics. Like Telltale’s other games, these small adventure areas are never complex enough.

Player choice is still an important part of the experience, although the core story will remain fixed. The biggest narrative change comes from deciding on what to do with the Eternity Forge, and although this only affects the back half of the season, it does change things enough to recommend a replay. Gamora’s sister, Nebula, has a prolonged influence; her role changes depending on how you interact with her, as she may become an ally or foe. Other choices determine who comes along with Peter on missions, or whose side you take during the many, many arguments. Most decisions will result in altered dialogue, so it all adjusts nicely. Regardless of choice, the overall story is still entertaining and somewhat cathartic in delivery. 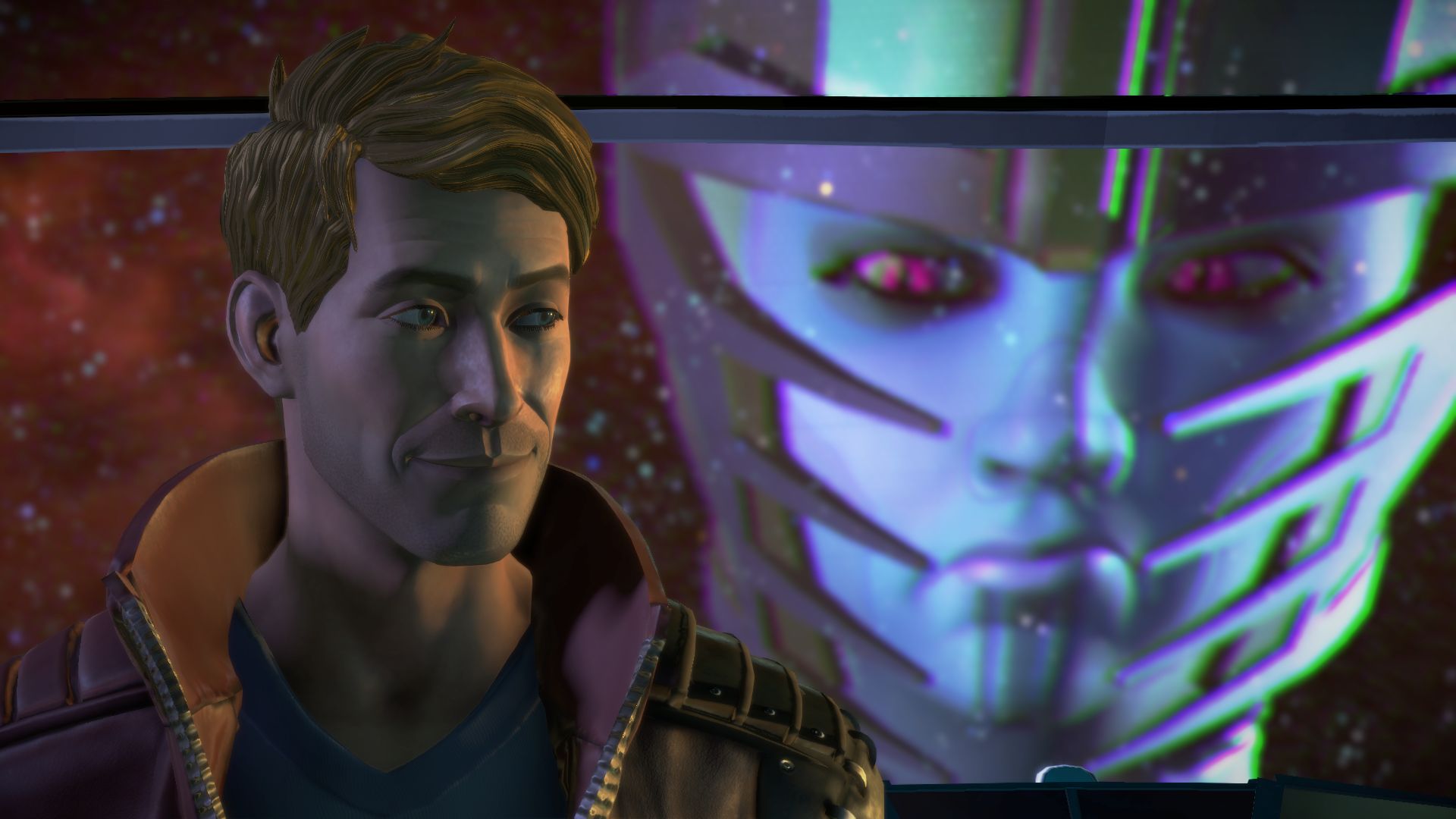 The game is faithful to the franchise when it comes to humor. Although not quite the funniest game from Telltale, there are a handful of jokes that will earn a hearty laugh. Like when Quill asks to borrow Drax's muscles and he refuses because they are still attached to his body, or when Peter gives a corny speech near the finale. Since you are Peter, many jokes are under your control, like when he answers a call from Hala and can respond with "new phone, who's this?" or when he explains how his old moustache brought the Guardians together. It is certainly funny, although choices made in conversations can lessen or enhance the hilarity.

Voice work for the crew is excellent. Rocket, Mantis, and Drax act quite similar to their movie counterparts with appropriate inflection and timing. Ashly Burch is perfect as the troubled Nebula and Gamora treads the fine line between vicious warrior, loyal friend, and regretful assassin. Even Star-Lord maintains his happy-go-lucky attitude amidst some overwhelming negativity. It's a pity the season only uses a small collection of 80s songs. Given the eight hour run time, a handful of music interludes in each episode would have been nice.

The art direction is pretty good, especially when it comes to the colorful space backdrops and character designs. An underused bokeh focus effect is put to good use in a few wide shots. There is a lot of color used, mainly purples and greens, although the darker environments keep it from being overly saturated. 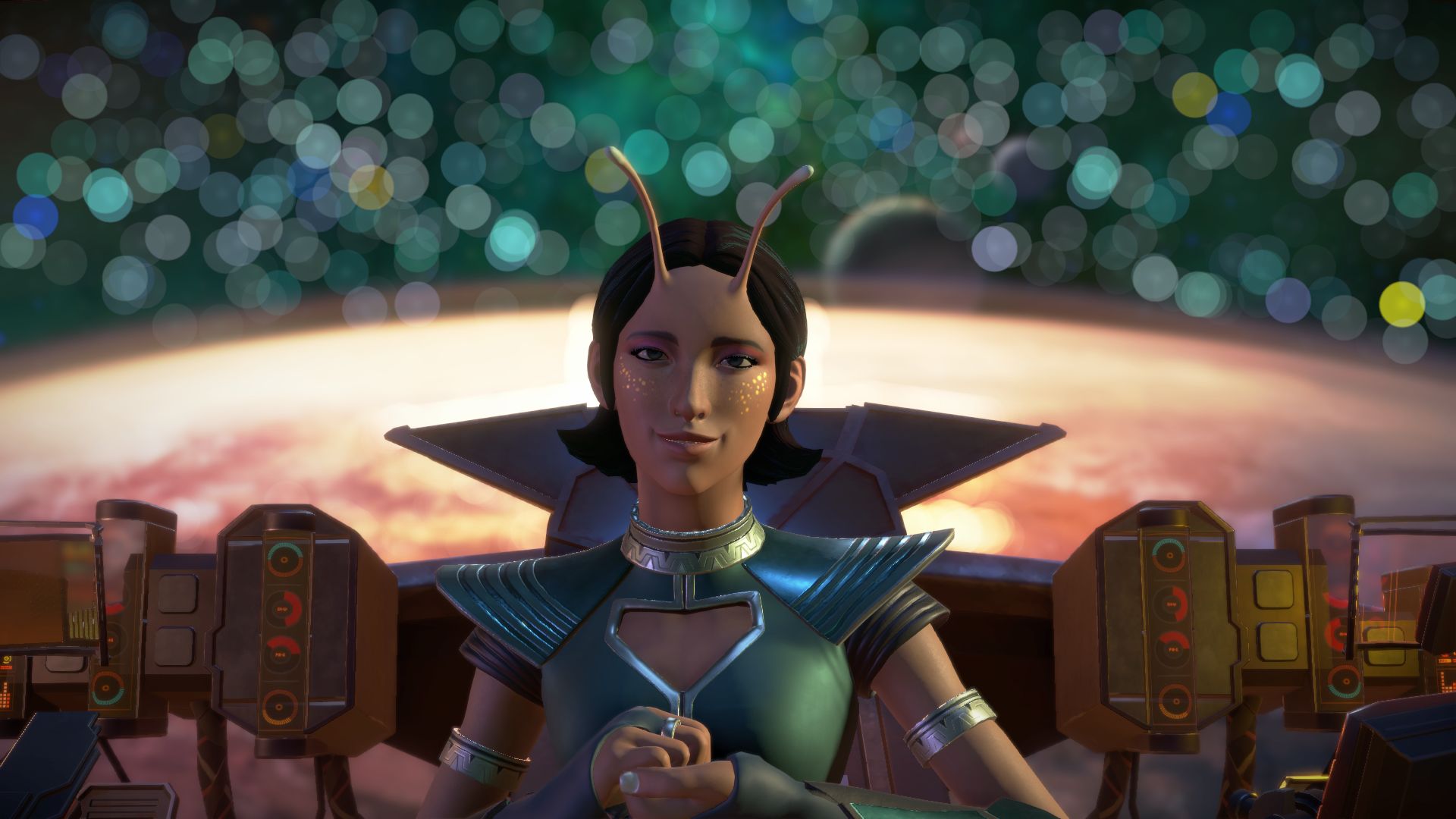 Guardians of the Galaxy does show that Telltale still have something appealing with their stories and can adapt any franchise. But there isn’t a huge distinction between this and their other games. Using Star-Lord's rocket boots to navigate is a minor change to the formula, as is taking sides or placating a crew of disagreeing warriors. But with a healthy sprinkling of humor, fun combat sequences, and an adventurous story, there is enough here to enjoy the 8+ hour runtime. It may not be the best interactive story from Telltale, but it comes together in the end like a ragtag group of superheroes destined to protect the universe.

Our ratings for Guardians of the Galaxy on PC out of 100 (Ratings FAQ)
Presentation
70
Colorful space backgrounds and good character designs. Lighting is used well. Some environments look a little plain and blocky. Voice work is excellent across the board.
Gameplay
52
Light on interaction and puzzles, despite multi-tiered explorable areas. Action sequences often involve all Guardians and are enjoyable.
Single Player
80
Star-Lord’s adventure is entertaining and funny. He has to placate his crew of misfits while they chase down a brutal enemy and then also decide the fate of a powerful device. Some major decisions alter events enough to encourage replay.
Multiplayer
NR
Performance
(Show PC Specs)
CPU: Intel i5 3570k
GPU: XFX RX 480 GTR Black 8GB
RAM: 16GB DDR3
OS: Windows 10 Pro 64-bit

81
Stuttering was observed as the camera altered positions, although mainly during the first episode. “Previously on” segments are long and cannot be skipped.
Overall
73
Telltale has barely changed their interactive story approach for Guardians of the Galaxy, but that’s not such a bad thing. With a solid application of humor, fun combat sequences, and a well-realised cast, they have forged a bold space adventure. 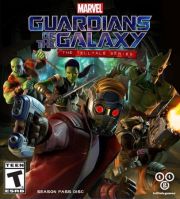 All videos for Guardians of the Galaxy (7)
Advertisement ▼