A charming platformer that comes up a bit short

Although the launch of the Xbox One X isn't exactly a whole new generation, there is still plenty of buzz that surrounds this big power upgrade for Microsoft's console. There are plans for plenty of games to take advantage of the new hardware, but few are actually releasing as brand new titles alongside it. Crackdown 3 was meant to be one, but it has been delayed yet again due to some development troubles. This leaves us with Super Lucky’s Tale. That's certainly not a bad choice, in theory; after all, platformers are always found in the starting lineup for new hardware. Super Lucky’s Tale tries to appeal to gamers of all ages with its colorful and light presentation and accessible gameplay mechanics. However, despite showing some promise, the game ends up feeling more irritating than fun. 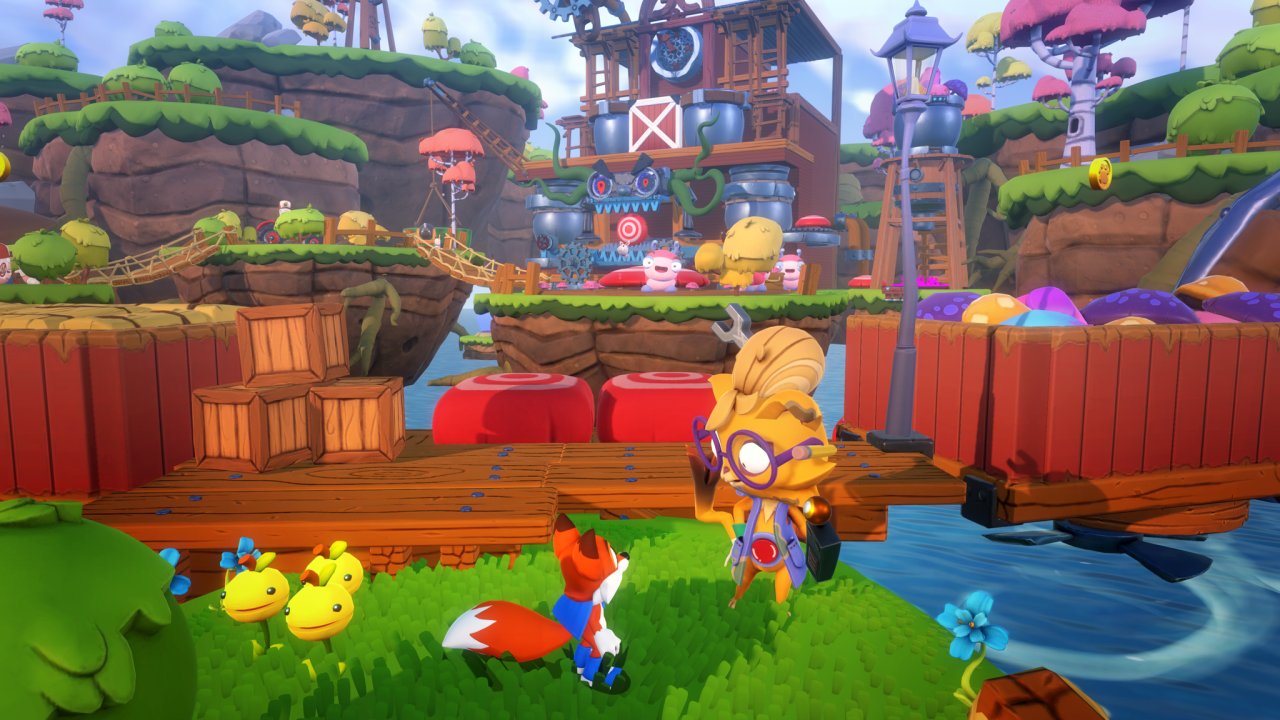 This light hearted adventure follows Lucky, a young fox who aspires to one day go on grand adventures. His older sister is an inspiration and already an explorer, who one day returns carrying a special item called the Book of Ages. This book is said to have great powers, so of course a group of nefarious cats known as the Kitty Litter gang attempt to steal it. But the Book itself suddenly comes alive and sucks in the gang. In the heat of the moment, Lucky pounces to save his sister and gets transported into the pages of the book as well. From there, he must navigate the four different worlds within the book, defeat each of the Kitty Litter members, and find his way out.

The story is fairly simple and appropriate for this sort of game, with Lucky being a very kid-friendly hero who occasionally encourages the player, makes child like noises, and is generally a happy-go-lucky fox. The characters that you'll come across in the four worlds are equally friendly and whacky in their own ways, from lazy Yetis to Worm farmers, and though there is no voice acting, the text boxes often contain some humorous dialog. The members of the Kitty Litter gang don’t exactly make for evil nemeses or anything; they are simply equally whacky scoundrels that want to stop Lucky's progress. You'll casually meet and chat with them a few times before you even get to battle. It's a warm and friendly world, even if there are dangers in it.

Super Lucky’s Tale is a 3D platformer that features a series of levels over its 4-5 hour length, accessible from within four hub worlds. Exploring the hub worlds doesn't really seem to have a purpose - you can collect coins to add to your overall total, but there is nothing to spend them on, and they just respawn later anyway. So the main purpose of the hub is to host the doors that lead to standalone platforming levels. Those largely fall into two categories - controlling Lucky from either a 3D or 2D plane. In 3D levels, you've got more or less full control of Lucky to try and navigate a series of platforms or structures, all while avoiding deadly ground or an abyss below. It's all rather straightforward and there aren't too many surprises or precision-demanding sections. You can also slightly rotate the view of the camera, though it's rarely needed or all that helpful. In the 2D levels, you only need to worry about moving sideways, while again avoiding danger such as spikes and fireballs, and not falling off things. The levels themselves feature enough variety between them to help keep the pace going and players entertained. 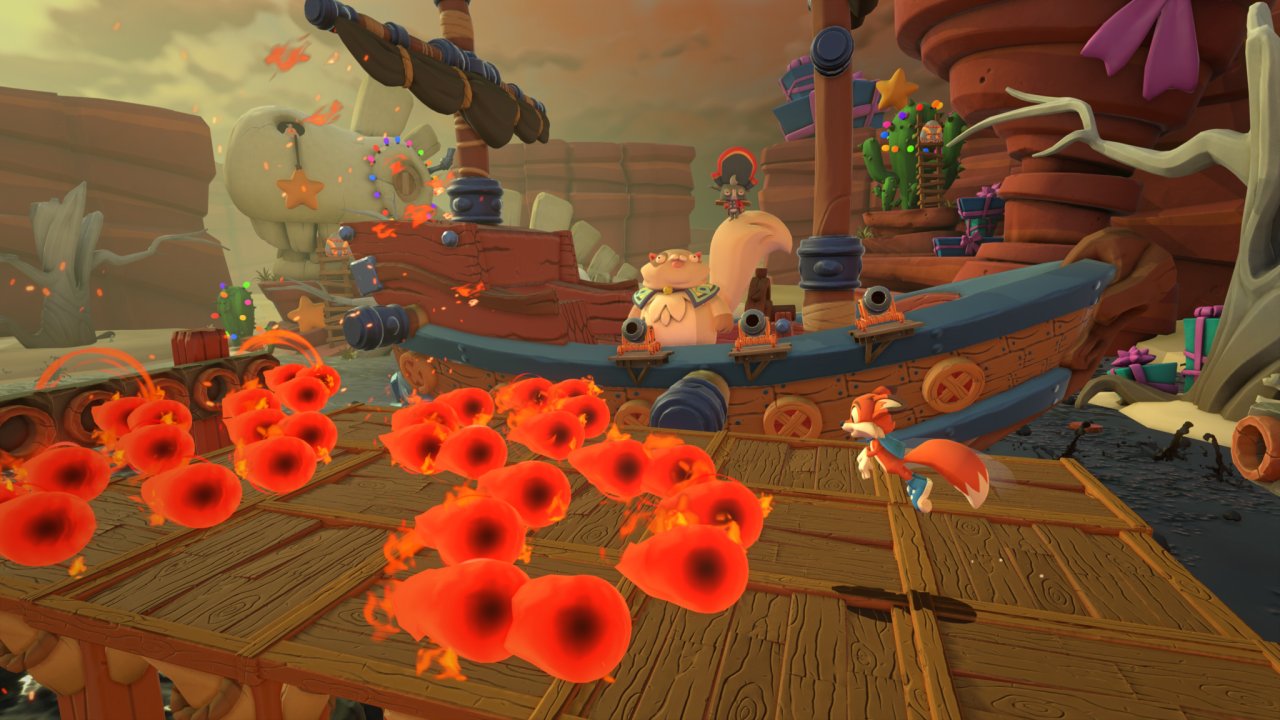 Besides the obvious jumping (and double jump), Lucky also has two more abilities. He can swipe with his tail as a combat move, and also burrow underground. He can also perform a diving burrow sort of attack to break apart objects, but it's rarely used. Burrowing is mostly used to get past certain obstacles that you cannot jump over, or recover buried coins. The tail swipe move is used to stun the enemies you'll encounter, whether they are caterpillars, aggressive sunflowers, or bees. The latter are the ranged enemy type that has an attack you can swipe away. To actually defeat the enemy, you must jump on them. It's fairly simplistic, but that is ok. At the end of each hub world you must also face a boss battle; these encounters have a couple of stages, but they have the same design with Lucky on a platform and boss in the background, and are easily dispatched in three stages.

Outside of the traditional 2D and 3D levels, players will also encounter a few other activities. There are a couple of Burrow Run levels, where Lucky is constantly moving forward in a 2D level and you must jump and burrow your way to collect as many coins as possible while avoiding numerous dangers. The couple of Marble Minigame levels have you rotate a maze with Lucky rolling inside of it, trying not to fall off the edge and get to the center. And lastly, there are Sliding Block puzzle levels, where you have to think about how to position statues on specific points of a grid. All these activities add a little bit of variety to the platforming core.

As charming as the presentation may be, the gameplay can be rather tricky and occasionally annoying. Controlling Lucky in 3D levels can be needlessly difficult; although he has a shadow to help gauge where he will land, he still has a tendency to miss what you're aiming for. Whether it's a platform, or the head of an enemy, you've got three hearts (three hits that you can take) before a life is lost. Losing a life isn't a huge deal - you get about 5 per level, and dying simply means you restart at a checkpoint. You'll need to collect coins again, but you won't need to collect hidden items. Run out of lives though, and you need to start the entire level from scratch. While mistimed jumps towards platforms are not too frequent (though Lucky is not very fast to react or move), it's the damage you take against enemies that can be frustrating. Simply touching them will hurt you, and sometimes you can get into an awkward spot behind them where it's tough to gauge the moving/jumping direction, causing you to take further hits. Lucky also has a tendency to over-jump the heads of enemies which again leads to needless damage. If the game wanted to be truly accessible, it would have benefitted from tighter controls or an easier difficulty setting that helped to aim your jumps and/or gave you more hearts per life. 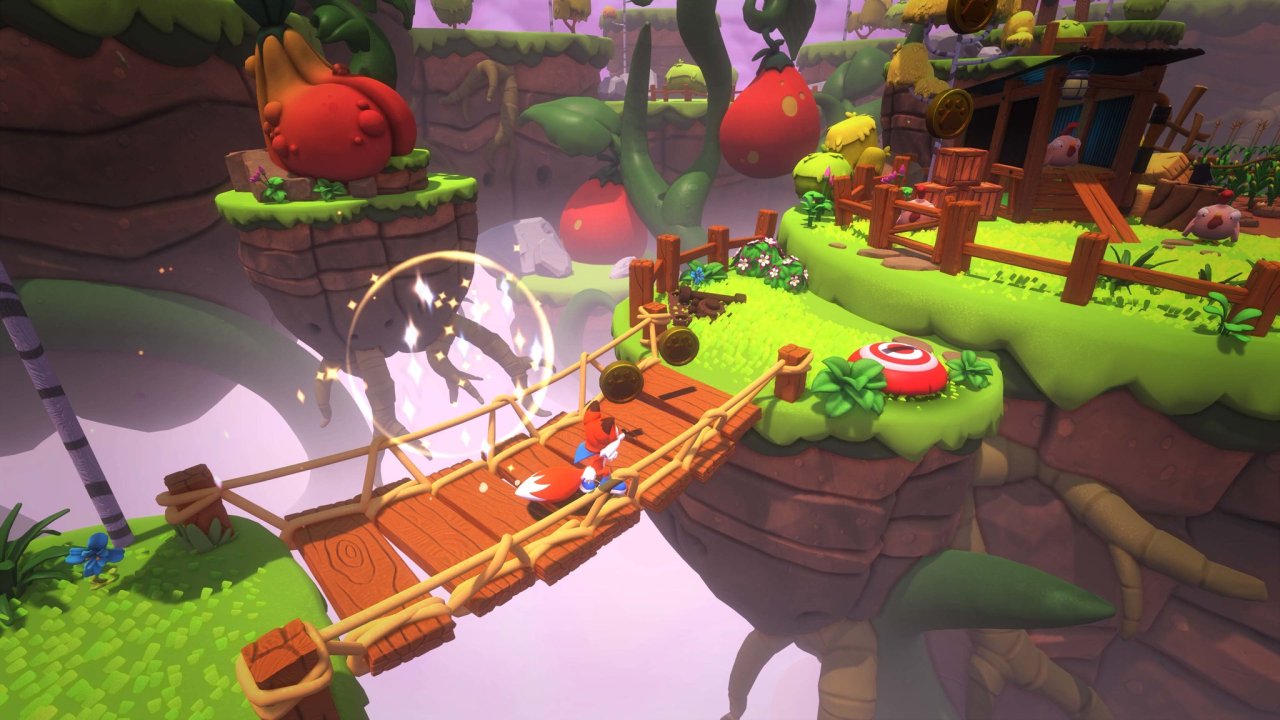 The core of your progress in Super Lucky’s Tale lies with collecting clovers. In order to unlock a hub boss and progress to the next world, you must collect a certain number of them in total. The abovementioned side activities also offer one clover each. Up to four clovers can be earned per regular level - you get one for completing it, and one for colleting over 300 coins. You also get one for finding five letters that spell LUCKY hidden across the level, and the fourth clover is given for completing a secret objective, such as a hidden foxhole challenge. These foxholes transport Lucky into a small special activity, like collecting all coins within a time limit. Or, the level's hidden challenge could be completing a sidequest, like helping a farmer collect all his chickens.

But just as the gameplay runs into trouble, so does this fairly traditional gatekeeping design. The game's rather ridiculous clover requirements come to the forefront by the time you want to take on the third boss, which unlocks at 60 clovers. Up to that point, the maximum clovers you can earn is 72. So that's over 80% of all available, and a ridiculously high progression block for any game, let alone one aimed at kids. This means that even if you earn all available 16 clovers from side actives up to that point, you still need to get, on average, more than 3/4 clovers on each level. This introduces grind, and not replay value, as it starts to put a further spotlight on the level design shortcomings. In some levels, it's incredibly easy to get the clover for collecting the 300 coins, while in others, despite going through them as slowly as possible, it seems like a major feat even for a skilled player, never mind a younger one. Coins from defeated foes have a physics attribute so they scatter randomly, making some impossible to pick up. The fox hole challenges can vary greatly in their difficulty level and, with the imprecise controls, can prove to be frustrating; you also cannot retry these unless you die and restart the level/checkpoint. Collecting the LUCKY letters also ranges from very easy to quite challenging, and again that's by adult player standards. It's unfortunate, but this overly restrictive progression design puts a damper on the pace and enjoyment of the game.

Super Lucky's Tale aspires to be a charming adventure and it has the art style to match. It's not overly detailed or very technically visually impressive, but it's clean, bright and uncluttered. The soundtrack features some nice tunes that might even have you nodding along, and they complement the gameplay well. The game is available for the Xbox One family of devices and Windows 10 PCs, and for this review we played it on the Xbox One X unit in both 1080p and 4K resolutions. There wasn't a world of difference between the two resolutions, though of course the 4K version looked even crisper and brighter. The boot times are very fast, whether loading levels or switching between hub worlds. 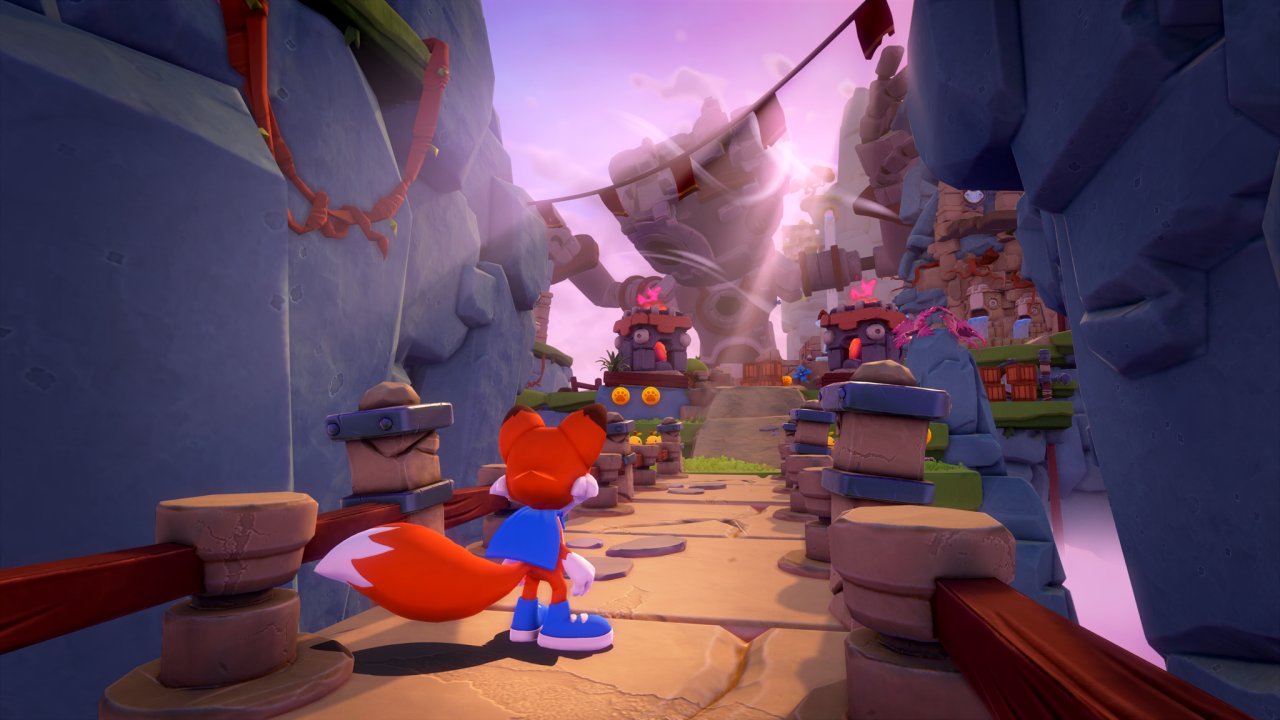 With the delay of Crackdown 3, Super Lucky's Tale has been left a bit awkwardly as the sole brand new release to go with the Xbox One X launch. It's a nice looking game, but not exactly one that you'd use to showcase the new console's potential. You may also be weary because you may have heard of the original Lucky's Tale, a bundled-in Oculus Rift launch game from 2016. But this new release has little to do with that VR version, and the shortcomings are very much its own doing. Lucky makes for a likeable kids hero that goes on a decently entertaining adventure across bright and whacky worlds, but inconsistencies in gameplay, lack of difficulty options, and a harsh gating of content will leave even adults occasionally annoyed at this tiny creature.

Our ratings for Super Lucky's Tale on Xbox One out of 100 (Ratings FAQ)
Presentation
70
The colorful and bright game world is pleasing to explore, and the accompanying soundtrack creates a nice atmosphere. The art style is nice, but not technically striking.
Gameplay
65
Lucky isn’t overly fast or maneuverable, and because of the camera positioning you will take some needless damage. Controls could have been tighter, and a difficulty option would’ve made it more accessible.
Single Player
60
An overly strict progression system will require you to replay earlier levels to get almost all clovers. If you simply take into account playing each level once, the game is rather brief.
Multiplayer
NR
None
Performance
85
Quick loading times, and a smooth framerate apart from brief moments in hub worlds when the game is saving.
Overall
65
Super Lucky's Tale looks and sounds pleasant, and its charming world and characters will appeal to younger audiences. However, despite getting the basics right, some gameplay and overall design concerns lead the game down a few wrong foxholes. 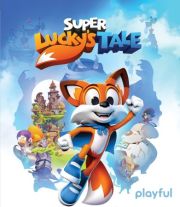