BioShock 2 successfully proves that there is more to the original game than the introduction and exploration of the underwater city of Rapture. The game improves the combat and changes some of the mechanics to make the actual playing parts more enjoyable. There are clever touches related to presentation even though the graphics engine looks near identical to its predecessor. In the sequel you play as an Alpha series Big Daddy known as ‘Subject Delta’ who is looking for his daughter. Although not quite as armoured as the standard Big Daddies you can now use Plasmids and weapons simultaneously. You will continue your journey through Rapture in many new locations against some different foes alongside the standard Splicers. There are even more voice recordings than the original, bringing out more back-story from previous events. The antagonist in the sequel is the psychologist Sofia Lamb, but there are other interesting characters that provide a similar role to Cohen from the first game. One of the key features of the original was the presentation of the underwater city and the sequel maintains this high standard. 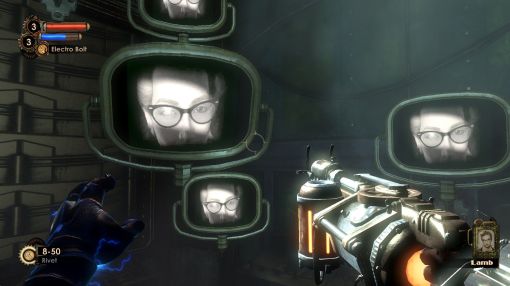 Sofia Lamb welcomes you back to Rapture by trying to kill you many times.

BioShock 2 handles the story and game presentation very well, and in some ways refines the experience. There are more set sequences where something surprising, but not scary, will unfold in front of you. This might be a Big Daddy walking slowly in front of you behind glass in the ocean. Or perhaps a Splicer will run to the corner to attract your attention while he later sets up a cleverly scripted ambush. Little details like this make the game really enjoyable to play through because you aren’t sure what new sequence they will throw at you. All of this presentation is certainly highlighted by the great voice work from a large cast. Sofia Lamb is the most memorable and not only is she voiced wonderfully (Fenella Woolgar) but her dialogue is intriguing. I remember stopping in many places after acquiring a voice recording to listen to it without interruption. Graphically the game maintains much of the same visual appeal as the original which is certainly not a bad looking game. Audio has its share of problems with sounds cutting out and music remaining in a loop, but most of the time it sets the mood nicely without distracting.
The original BioShock had a great premise and an amazing setting but it had some mixed combat. At times the action was fun but sometimes the combat felt like an obstacle. It certainly seemed to rarely play out as good as it could have been with all the plasmids and gadgets at your disposal. BioShock 2 makes the combat feel more natural and faster than the original. Hacking is now real time and, although much simpler, you must do it while under pressure. You can fire a hack dart at a moving sentry bot or camera mounted on the wall. This is a great when Splicers occupy a room with security allowing you to cause some real chaos while they are oblivious to your presence. Unfortunately the sentry bots you acquire will block you in tiny rooms and doorways making navigation unnecessarily frustrating. Ally bots and Splicers make up for this somewhat by being a bit smarter during combat, they take more forward position when you are under attack. In general the AI seems more complete and combined with their great lines it makes the action more involving. 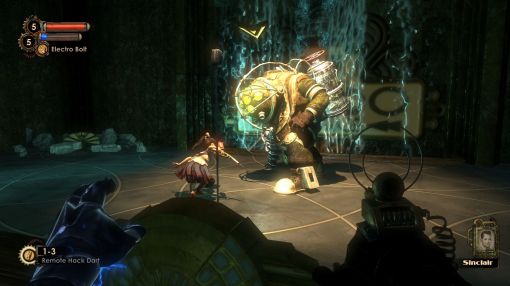 Excuse me Sir, may I please borrow that Little Sister

You’ll be dual wielding a weapon and a Plasmid and can very quickly change weapons during combat. Considering you’ll be facing more enemies, or at least more enemies over a shorter period of time, this makes the action faster. Most of this concentrated action happens during segments where you defend a Little Sister. For you see as a Big Daddy you can now use Little Sisters to harvest Adam for you. You again must defeat their diving suited friends before you can take her for your own devices. You can engage the Big Daddies at any time but it’s best to be prepared and know the area layout before you try to acquire a Little Sister. Once acquired, she will rest on your shoulder and occasionally make comments about battles or other events. She does not say much, which perhaps helps her from getting annoying, but I would have really liked to see some more non-situational comments. When the Little Sister leads you to a body you can commence the gathering process which requires a more defensive approach.
123Next 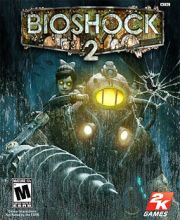 All videos for BioShock 2 (3)
Advertisement ▼