While certain genres of gaming are more popular than others, bullet hell games are probably the most niche of them all. Replicating the style of classic coin-op shooters, bullet hell games ramp up the difficulty by filling the screen with projectiles and demanding players pay attention at all times. Attacking an enemy is rarely the point of these games; these are more about showing off your style and memorizing bullet patterns to clear these games on a single credit. 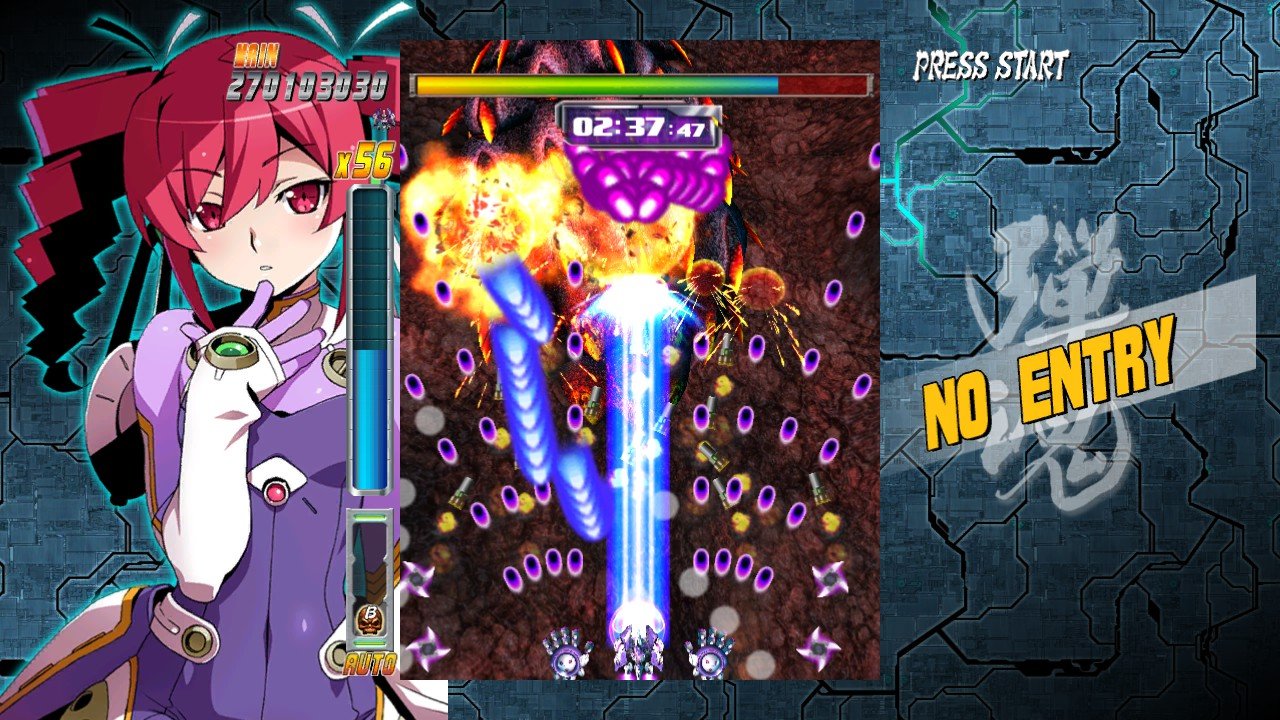 This genre sees most of its popularity in Japan, where arcades are still relatively popular. As such, more recent bullet hell games have adapted anime style character designs and doubled down on their arcade heritage. Bullet Soul Infinite Burst is decidedly Japanese in its execution with typical anime designs, but that doesn’t mean the gameplay suffers or that it isn’t approachable for newcomers to this genre.

Being so rooted in arcade style gameplay, Bullet Soul barely has a plot. Something is going on and you’re there to stop it, but there isn’t any in-game text or even a translation of the Japanese dialogue that is present in this game; if you’re looking for a plot to propel you into action, you might as well look elsewhere. If you are already on board with this genre, you’ll find that Bullet Soul Infinite Burst is a well-executed and flashy bullet hell game with some concessions made to ease new players in.

To start off, Infinite Burst is actually an updated version of a previous release. Bullet Soul was originally released by developer 5pb. Inc. for Japanese Xbox 360’s in 2011, with Infinite Burst arriving three years later. The US didn’t see either game until 2016 for Xbox 360 (2017 for PC), but both were released within a month of each other and are basically two different shades of the same thing.

Where Infinite Burst edition differentiates itself is in enemy patterns for the “Normal” mode and then the inclusion of “Burst” mode. Burst mode is basically a slightly easier version of the main campaign where your ship has a health bar and some wild burst attacks that can be charged up by consecutively attacking and collecting medals. It makes for quite the spectacle on screen and is certainly easier to swallow for people with no familiarity with the genre, even if the action is crowded. 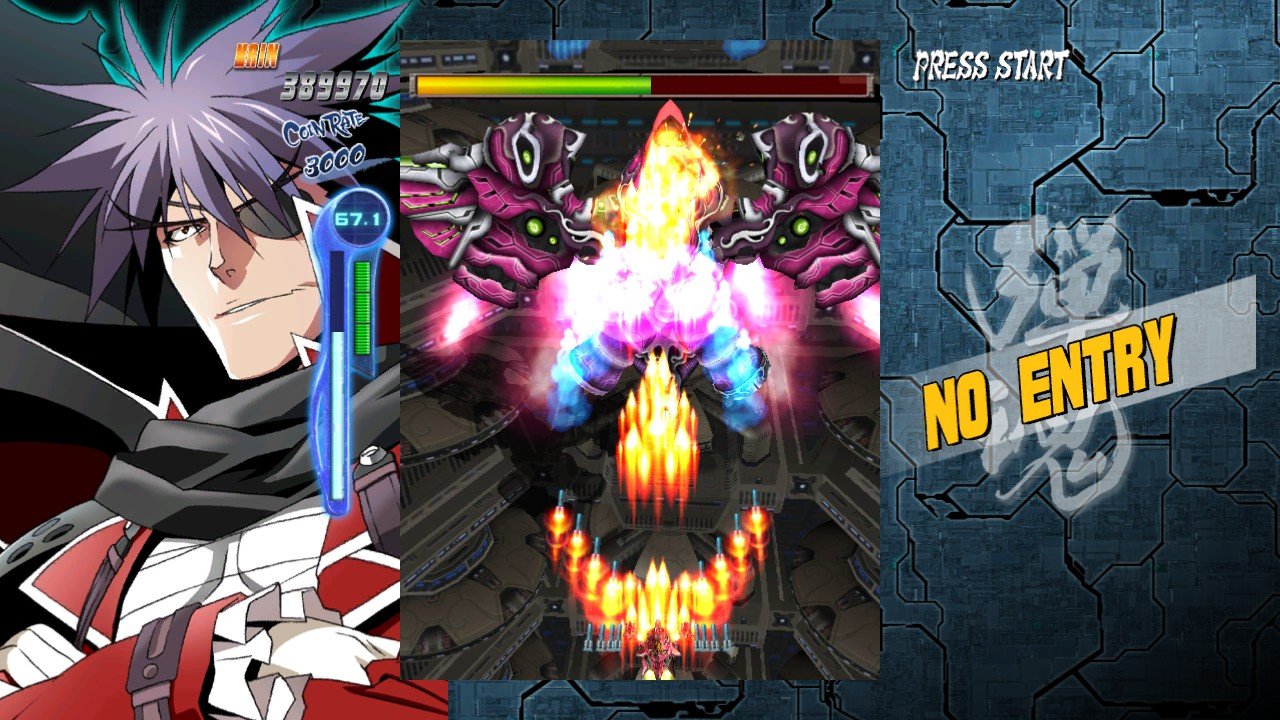 Normal mode is exactly what you’d expect from a bullet hell game. You’ll have weapon power-ups to grab and bombs to drop for when the screen gets too intense to deal with. I do really like the inclusion of an auto-bomb option, which will drop a bomb upon your ship coming in contact with an enemy projectile. It might be a bit of a cop out, but I rarely resorted to using my bombs to begin with. Having them automatically drop at least reminded me that they were an option.

The biggest mix-up to standard bullet hell conventions in Bullet Soul is right in the title; killing any enemy will then leave a grayscale version of their projectiles (or a soul) on screen for you to learn patterns. While its overwhelming the first time you see it, the usefulness of having this feature means learning when and where to dodge on stages can be executed while still progressing through a level. This definitely helps with trying to conquer the various challenges this game will be throwing at you.

The biggest threats will be the various boss battles, which all have multiple phases. These aren’t the largest or most imposing battles I’ve seen in a Bullet Hell game, but they punctuate the action after lighter sections in the stages. Each boss will have various parts that you can disable to better attack their cores, but that isn’t required to actually surmount them.

You can tackle the five levels of this game with one of four characters, though the differences aren’t that pronounced. Each ship has two different types of attacks available by holding either X or A on the gamepad. Typically these are a wide firing arch and a narrower one, but one character (Sadahl) has a short range drill and another (Loop) has a homing laser that will lock-on to enemies near her. Each will have different applications and learning when to utilize them properly will help increase your total score and the amount of deaths you’ll suffer. 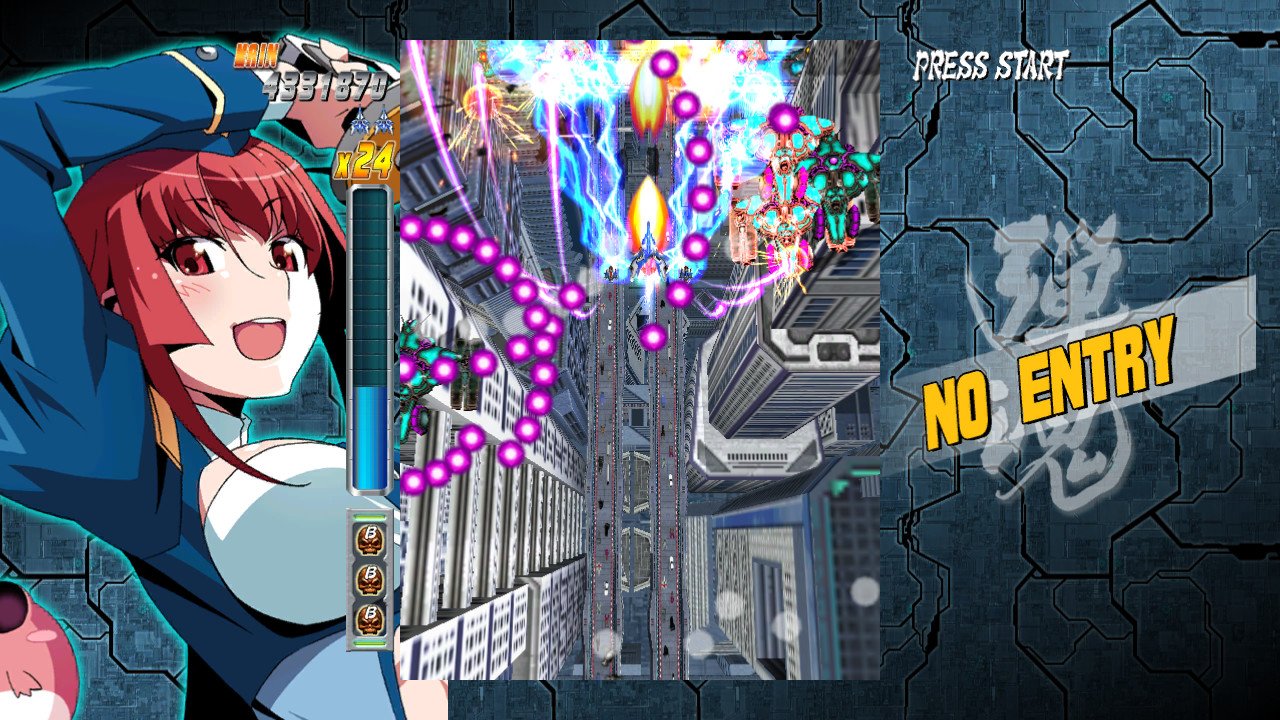 Getting through the relatively short story isn’t the biggest issue, though. I’m almost positive the game has infinite continues, but my first playthrough only saw me continuing roughly four times. Obviously later levels increase the challenge, but Bullet Soul is clearly a game meant for newcomers. Bullet patterns aren’t too ridiculous and the aforementioned grayscale bullets definitely help with figuring out how you should be dodging, leading to a much faster adaptation to this game’s particular quirks.

The brisk pacing is actually a plus, as I wanted to immediately replay it upon my first completion. Beating “Normal” or “Burst” mode with all four characters also unlocks “Musou” mode, which is Normal mode on drugs. In this, all of your weapons will be at max power, so you’ll be tearing through bosses in no time. It can often feel like a cheat option, but having already conquered the game so many times, it definitely works as a stress reliever if you were constantly dying on different segments.

In addition to all of this, you can also play the game in co-op mode, though the limited screen size might obscure things a bit too much. This PC port does have the option to tilt the screen and better replicate the arcade cabinet, but even then you can’t alter the resolution or any of the quality settings. This is a fairly basic port and it actually crashed a few times for me. At least the gameplay runs incredibly smooth, but it would have been nice to actually utilize the full resolution output of my monitor.

Our ratings for Bullet Soul Infinite Burst on PC out of 100 (Ratings FAQ)
Presentation
60
Probably the weakest aspect of Bullet Soul Infinite Burst, the presentation is a bit rudimentary and the art style won’t be to everyone’s liking. The music is also kind of forgettable.
Gameplay
80
Bullet Soul Infinite Burst is fairly forgiving for a bullet hell game, but its unique aspects and brisk pacing make for a game that can be hard to put down. An unlockable mode also makes return visits a joy for stress relief.
Single Player
75
While not an especially long game, the arcade nature of Bullet Soul Infinite Burst means that anyone who gets hooked will be playing this for quite some time to try and best their scores.
Multiplayer
75
The inclusion of co-op can lead to very hectic battles, but it’s always a joy to conquer tough bosses with a pal.
Performance
(Show PC Specs)
CPU: Intel Core i7-3770 @ 3.4 ghz
GPU: Nvidia GTX 1060 6GB
RAM: 16GB DDR3
OS: Windows 10 Home 64 bit

65
While the game always runs smoothly, this PC port leaves a lot to be desired. Crashing can occur and the lack of resolution options means the graphics can appear blocky and a bit flat on larger screens. Controller customization is at least present and you can use a keyboard for co-op play.
Overall
75
Bullet Soul Infinite Burst doesn't reinvent the bullet hell wheel, but it offers a very approachable game for newcomers, as well as a highly addictive gameplay loop for those who get sucked in. It may not be a classic, but it's certainly good fun.