What is it about vast exploration that is so much fun? Various open-world adventure games seem to remind us of our instinctive yearning as humans to escape from boundaries and explore the unknown. The first SteamWorld Dig, released back in 2013, succeeded in tapping into this feeling in a subtle manner, while offering a more straight-forward and streamlined approach than the more free-form Minecrafts and Terrarias of the world. Coming off the heels of the recently released turn-based strategy SteamWorld Heist, developers Image & Form have decided to return to the 2D adventure formula of SteamWorld Dig with its latest release - and what a welcomed return it is. This sequel manages to hold onto the simplistic and appealing charm of its predecessor while beefing up the gameplay with a few more bells and whistles. 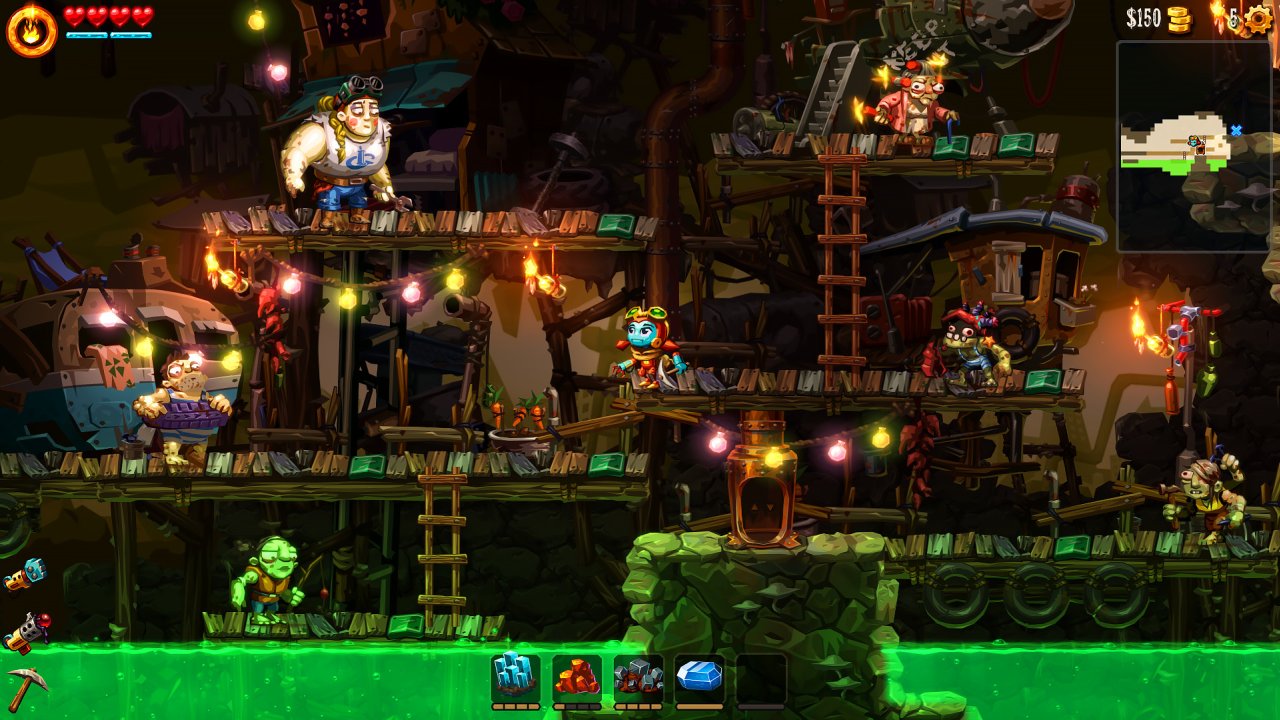 Newcomers might be led to believe that this game is similar to the massive side scrolling sandbox game Terraria in terms of gameplay and grandiosity. It certainly does look the part - aside from the Steampunk and western overlay - with its emphasis on mining, underground exploration, and resource gathering, all used as the primary means of progression. Yet, seasoned SteamWorld miners won’t be surprised to find that, like the first SteamWorld Dig, the gameplay is more reminiscent of a Metroidvania-type experience with subtle linear components. If anything, you might say it feels like a bite-sized, whittled down version of Terraria, especially in terms of the game’s length. My run clocked in at just over 10 hours, and this included some time spent wandering around gathering additional resources, grinding a bit for XP, and searching for secrets.

That’s not to say that this game is lacking in depth or sandbox elements as a whole - far from it. Much like the first iteration, SteamWorld Dig 2 provides a handful of diverse of underground areas in which you’ve got carte blanche to dig, explore, and gather a slew of riches and items along the way. It’s just that Image & Form implements this open-world formula within some loose boundaries and restrictions to tighten up the gameplay, as well as to keep you on track and moving forward. Rather than providing completely open and borderless terrain, there exists a few major segmented areas, interconnected only by a few passages here and there. Each setting comes with its own distinct character, some nice looking multi-layered 2D backgrounds, weird baddies, and a plethora of hazards throughout. You’ve got a mineshaft crawling with horned insects, a massive temple of spell-casting robot cultists, and a gorgeous looking swamp-like biome crawling with springy mushrooms and acid-spewing wildlife. Some of the various obstacles thrown into the mix include falling boulders (which I’m not too proud to admit I was crushed by a few times after digging right underneath them), walls of dripping acid, and plenty of lava.

Upon jumping back into this cartoony, steam-powered post-apocalyptic world, SteamWorld Dig vets will probably recognize our protagonist, Dorothy. She was one of the major players of Tumbleton village from the previous game, acting as the town’s resident trader. This goggles-sporting mechanical heroine has taken the reigns from the original game’s protagonist, Rusty, who has gone missing somewhere inside the vast caverns underneath the surface. Determined to save her friend, she must dig her way down through the depths, while fighting off whatever oversized bugs, mechanical tribesmen, or other hostile creatures might stand in her way. Assisting her, and occasionally chiming in with small talk and basic exposition, are a colorful cast of robot villagers and cave-dwelling humans who have weathered the storm of deadly warfare and earthquakes, which has wiped out much of civilization. 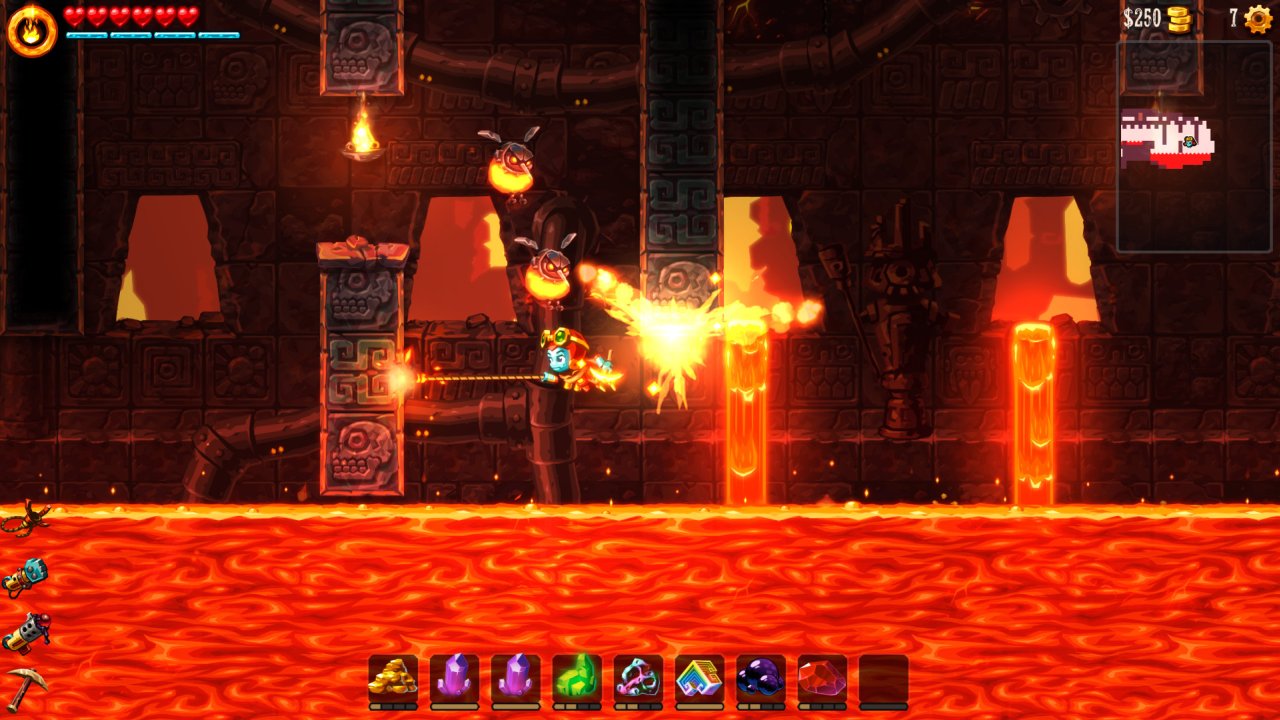 The game’s narrative proves about as vague and simple as its predecessor, though it largely just acts as a template for you to quite literally carve out your own story anyway. The vast majority of the game foregoes the tiresome exchange of lengthy dialogue and cutscenes. Rather, the narrative usually boils down to just yourself, wandering the caves in desolate solitude. Well, you’re not really alone, as you got your companion Fen - a tiny blue AI blob who follows along and sometimes directs you towards the next major destination of interest.

You’ll be going to work with your trusty pickaxe primarily, as well as a palette of other tools and weaponry you earn and find along the way - many of which are powered by water - in keeping with the Steampunk theme. In much the same way you’ll need to monitor your health and fuel for your lantern, you’ll want to keep that water tank at least partially full whenever possible, as it essentially acts as a sort of universal power source. Tools like the jackhammer, for example, is a pickaxe on steroids. It’s useful for both hardcore mining, breaking tough blocks the pickaxe can’t handle, as well as defeating pesky enemies that stand in your way.

Other items you’ll likely be utilizing throughout include a hookshot, a short-burst jetpack, and a bomb launcher. These devices are key lifelines during your journey - as they don’t just improve your monster hunting game and allow you to move about more easily, but they’re often needed as a means to progress farther. You might, for instance, run into a large pit that you must backtrack to later, once you’ve gotten your jet pack. As a side note - the game does a fine job in keeping the backtracking escapades to a minimum.

Each time you venture underground, at the very least, you’ll want to gather as many goodies as your backpack can carry before retreating back to the surface. Unfortunately you’re only permitted to carry a small number of treasures; that is until you start raking in enough cash to afford significantly larger packs. This can make things a bit tedious as you’re often forced to return to the game’s hub of “El Machino” to turn in your riches to your mechanical lobster pal, Barnacle Jones in exchange for money. This important destination also acts as a safe haven since it’ll automatically save the game and restore your health, fuel, and water upon entering. Thankfully, in keeping with the first game, there is a generous amount of teleporters underground in the form of transportation tubes, which can quickly take you to the village, as well as to various other tubes scattered across the caves that you’ve already hit. 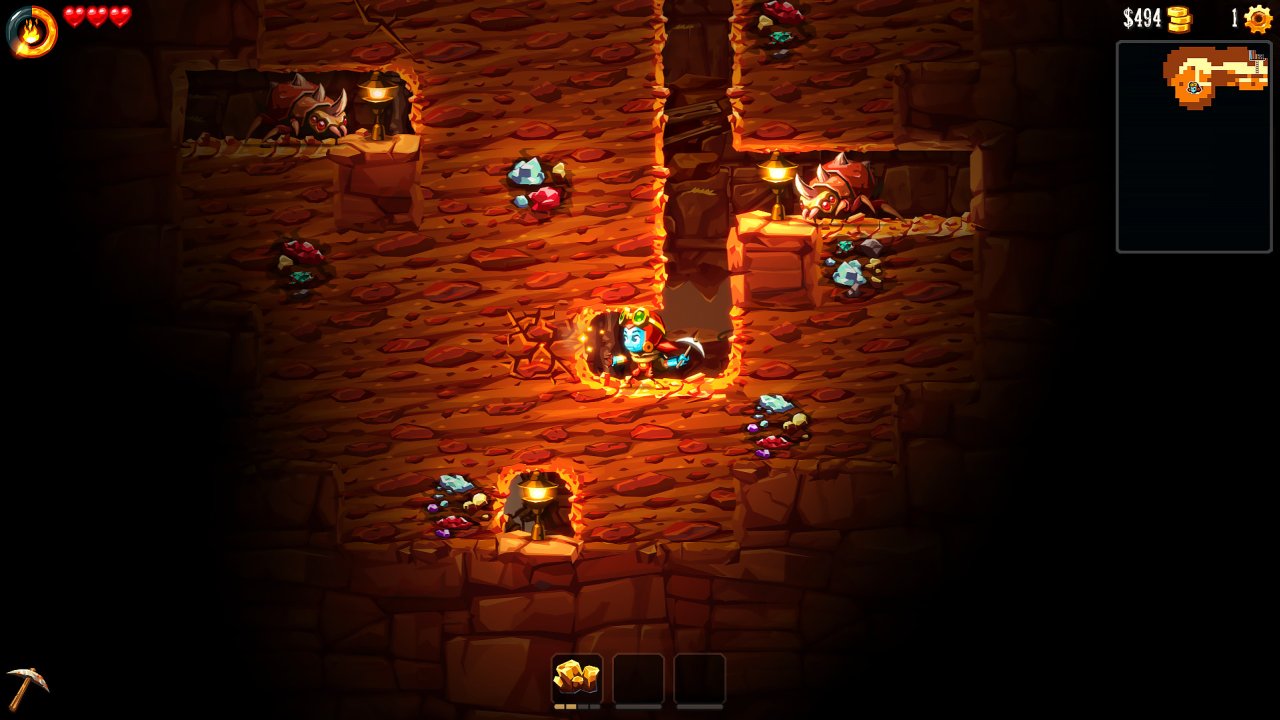 This cycle of dig, collect, retreat, and repeat might sound a bit mundane, but the polished gameplay, tight mechanics, and simplistic controls - in addition to the density of action on screen - usually makes for a far more enjoyable trek than it sounds. The game usually throws enough interesting “stuff” at you so the downtime is kept to a minimum; be it monsters, treasures, hazards, or secret passages. One major point of interest comes in the form of various cave entrances underground that often contain a unique series of obstacles or a puzzle to solve, which net you rewards upon completion. These rewards typically include well-hidden artifacts that can be traded for upgrade-unlocking blueprints. Usually somewhere in these puzzle rooms you can find at least one element that’s new to SteamWorld Dig 2, known as cogs. These enticing golden gears are used for mods - which are basically individualized item customizations and upgrades to help add some muscle and effectiveness to your gear.

The neat aspect regarding the customization of cogs and mods is that they can be mixed and matched however you see fit, and can be swapped out to put towards a different mod on the spot. This allows for an element of flexibility in dealing with the varying circumstances and situations during the game. For instance, you may find it difficult to navigate a particularly dark and dense area as you carry your constantly dimming lantern, so you can install a “larger than light” mod, increasing its radius. Or you could be exploring an area with a high frequency of lava pits, so you’ll likely want the “Vidar Boots” mod to place on your armor, making you temporarily resistant to lava. There are even more broad, game-altering mods such as the “criss-cross combustion,” which breaks all tiles that surround a resource block you’ve just broken, or the amusing “Deathplostions,” which causes enemies to combust upon dying. I liked the idea of this additional layer of detail, as it made things a bit more interesting and forced me to strategize a little, as opposed to just buying a stronger pickaxe and calling it a day ala the first SteamWorld Dig.

You don’t have to fret too much over picking the perfect customizations - or at least I didn’t, since my run proved somewhat effortless even before significantly beefing up my character. Most of the baddies go down somewhat easily and prove little more than a minor burden, especially once you’ve earned some additional health bars. In fact, one of the few weak areas in this game, aside from its length, might be its relative ease of difficulty. I didn’t perish too often, and even when I did, I rarely had much to lose, since the game allows you to keep some of your resources upon dying. During the later hours of my run, once I had decked out my character with a multitude of upgrades and items, I was able to breeze my way to - and past - the end boss without breaking much of a sweat.

Probably one of the few significant set-backs I can recall involved a particularly tricky puzzle involving pushing minecarts to various locations, which took some time to figure out. There is an overall lack of a real sense of danger, which seems to be a missed opportunity in a genre that thrives on this attribute, and it put something of a damper on an otherwise enjoyable, well-crafted game. You’ll often find that there just isn’t much at stake, especially with the frequent checkpoints and saves. But perhaps there is some value to be found in just kicking back and mining for gold in a state of blissful relaxation. It certainly compliments the casual, pick-up-and-play nature of the Nintendo Switch’s handheld functionality. 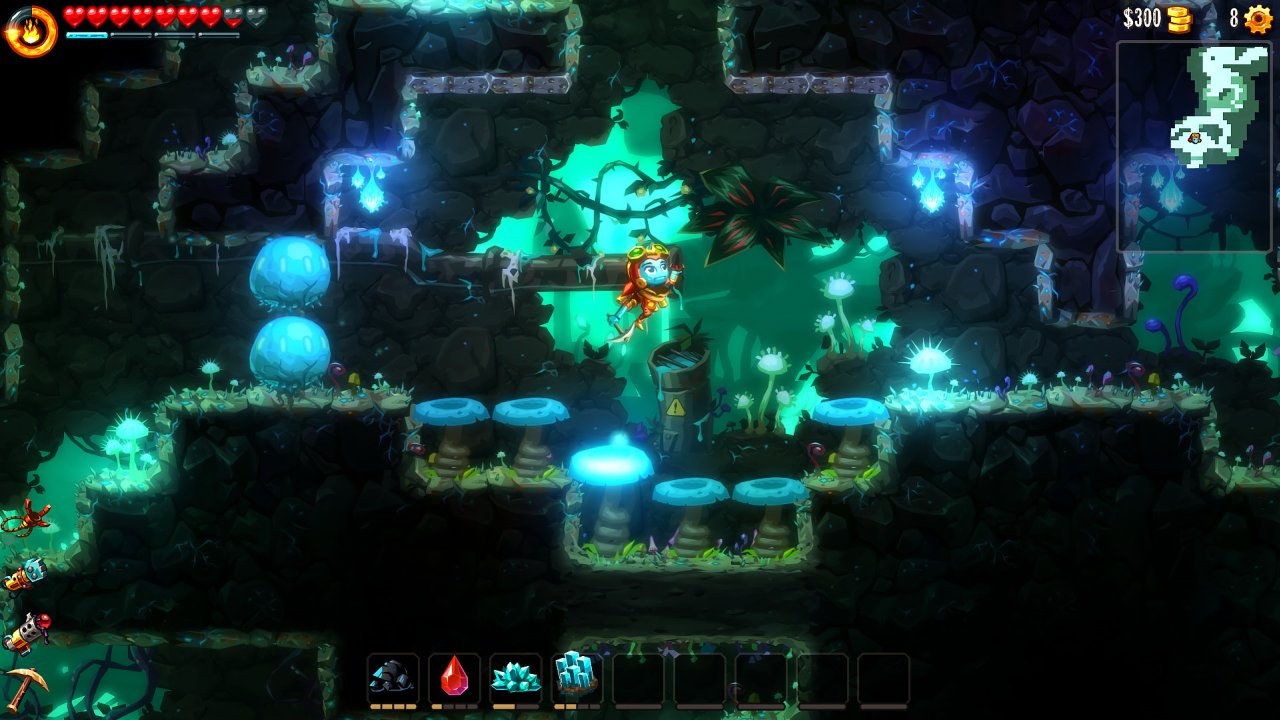 Even with this sequel providing a subtle dose of gameplay enhancements, it does come off as a bit shallow at times. Still, much like its predecessor, I found it quite easy to get lost in the subterranean clutches of this Terraria-tinged Metroidvania adventure. Plunging into the unknown and venturing through each of SteamWorld Dig 2’s charming environments offers an overall satisfying and fun experience. Its vibrant and colorful aesthetics along with its enchanting melodies serve to enrich this journey even more. The digging and gathering of riches will satiate the hunger of Minecraft gamers who value collectathons, while the simplistic sidescrolling, monster-slaying aspects should appeal to many an oldschool action gamer.

Our ratings for SteamWorld Dig 2 on Switch out of 100 (Ratings FAQ)
Presentation
75
Some crisp 2D aesthetics and pretty backdrops provide a simple yet effective graphical template. The soundtrack is easy on the ears, and the atmospheric, ambient melodies help set the mood and compliment the adventure-style gameplay.
Gameplay
80
Colorful environments, sharp mechanics, familiar controls, and a myriad of diverse puzzles sprinkled throughout all contribute to an addictively fun - albeit somewhat simplistic - adventure experience. The addition of mods is subtle, but effective in making things more interesting.
Single Player
78
Despite its short length, it’s an overall enjoyable journey underground. Its steady progression system and its allure of the unknown beyond keeps you enticed to keep playing. Exchanges with wacky NPCs provide a touch of character and narrative that is otherwise a bit lacking.
Multiplayer
NR
None
Performance
90
The game performed without issues, even when playing on the Switch’s handheld mode.
Overall
80
SteamWorld Dig 2 feels a bit like the beginner’s guide to sandbox games with its relative simplicity, but it maintains a sense of grandiosity and proves nonetheless entertaining with its Metroidvania-style adventuring and its marriage of both linear and nonlinear gameplay elements. 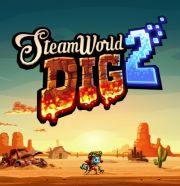 All videos for SteamWorld Dig 2 (1)
Advertisement ▼