Love is a Battlefield

Dating is tough. What you say, how you act, what you’re wearing; there are so many factors that go into impressing someone on a date that it practically becomes a game unto itself. This has led many musicians to write songs about the “Game of Love,” but what about video games?

Apart from dating simulators, nothing has really condensed the puzzle-like aspects of dating quite like Puzzle Dating. Taking the form of a match-three based puzzle game, Puzzle Dating distills the essence of what makes dating so confusing and enthralling with some cute aesthetics and a relaxing soundtrack. It doesn’t last particularly long, but there is enough of a hook to keep you interested for roughly an hour. 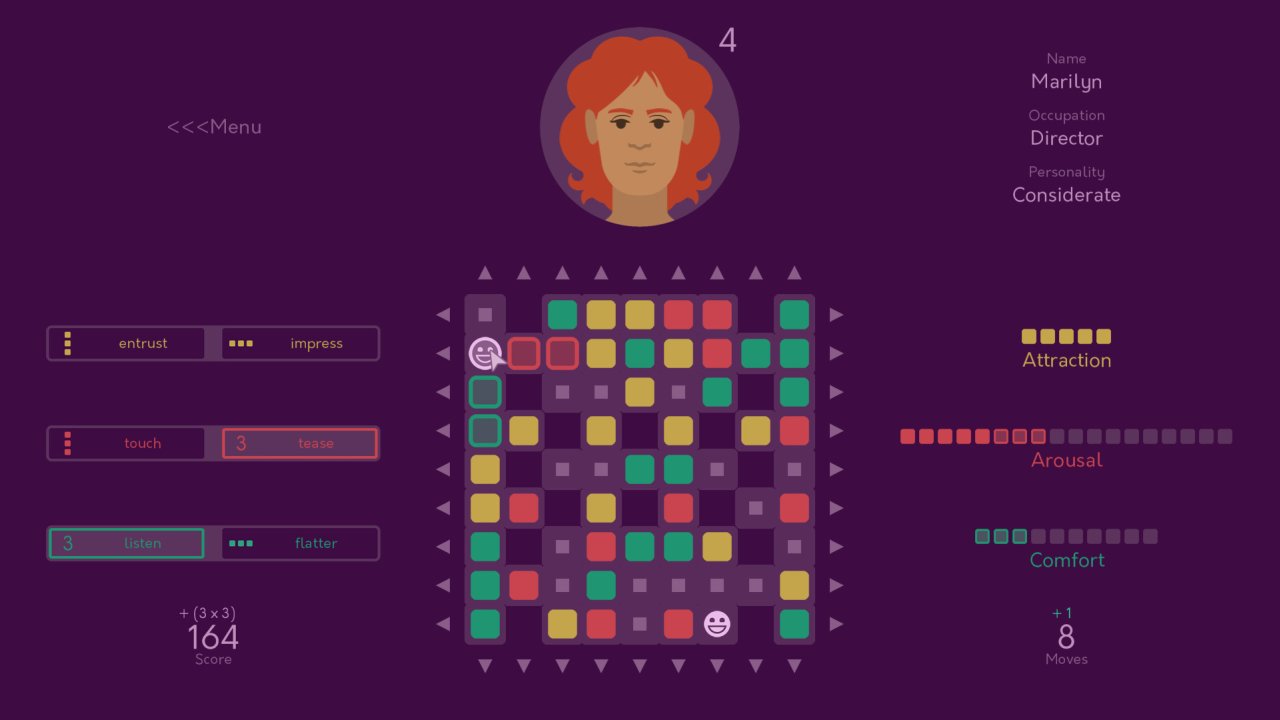 If you’re looking for anything deeper, then you can skip right past this game. I hesitate to call this a joke game (like Goat Simulator), but it’s a one-trick pony that isn’t hiding anything beneath the main gimmick. There is no character creator, no stats to level up, no successive dates with the same person; you just click on a different portrait and get thrust into matching colored blocks.

The puzzles work with match-three rules, so you’ll have to link together three red, green or yellow blocks in a row either vertically or horizontally. There are no diagonal matches in this, so the gameplay is kept relatively simple. That doesn’t mean there aren’t some different mechanics thrown in to differentiate it from Jewel Quest.

Each date you meet has specific characteristics they are looking for in a potential mate, which is what each color corresponds to. Yellow measures attractiveness, Green measures comfort level and Red measures arousal. Each date has greater needs in those specific categories, so you’ll need to fill up those meters by making combos of those specific colors.

This is all done with a turn limit, though. You can’t just make simple three block combos the entire time and succeed; if you run out of turns, you’ll get rejected and have to restart the dating game. There is a way to actually regain some turns during your date and that comes from making combos of four or more. When you do this, a happy face will drop onto the playing field and this acts as a wild card.

With the happy face in play, you can now substitute it for the third block in a single chain or even link together multiple colors in one large chain. Along with that, using a happy face will recover a single turn to your counter, thus giving you extra chances to woo your potential date. That really encompasses the entirety of this game; there isn’t much to go on beyond this. 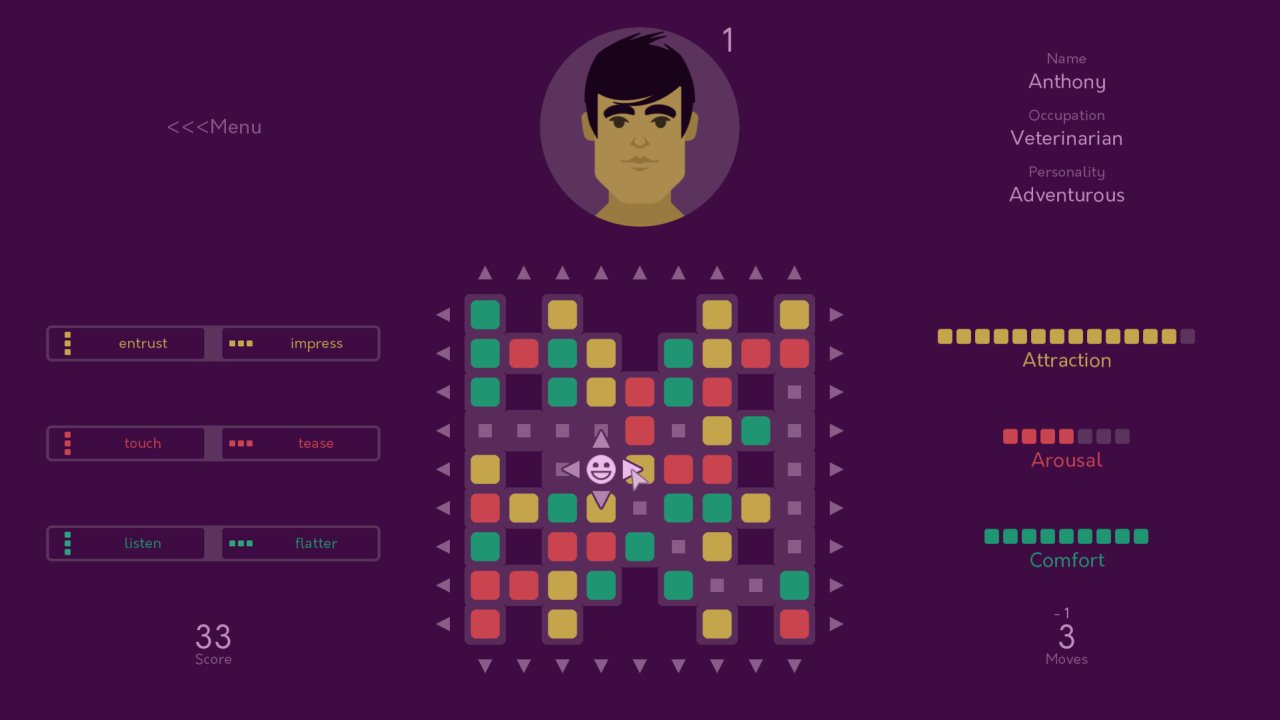 The other aspects would be that you can date both men and women, but that doesn’t change anything about the mechanics or the required meters you need to fill. It mostly just acts as a way to poke fun at how modern society has gamified dating with apps.

The presentation for Puzzle Dating is super clean, at least. The graphics are simplistic and the people look a bit ugly, but you’ll never be confused as to what you’re doing or what is being asked of you. There is even a colorblind mode that adds shapes to specific colors, thus letting people that can’t see red or green know what each potential date wants.

The soundtrack is also relatively soothing, even if it repeats far too quickly. I suppose you could play your own audio over this, but I doubt you’ll be tinkering around with Puzzle Dating long enough to get really tired of the single track included.

That being said, if this somehow does grip you for extended sessions, the game actually does become quite challenging as you go on successive dates. Your score will increase as you continue to make combos and doing things like making an L shape or a plus symbol will multiply the points of each block, thus driving up the challenge on the next level. Trying to unlock the Steam achievement for nine successive dates is pretty darn hard, which is kind of fun. 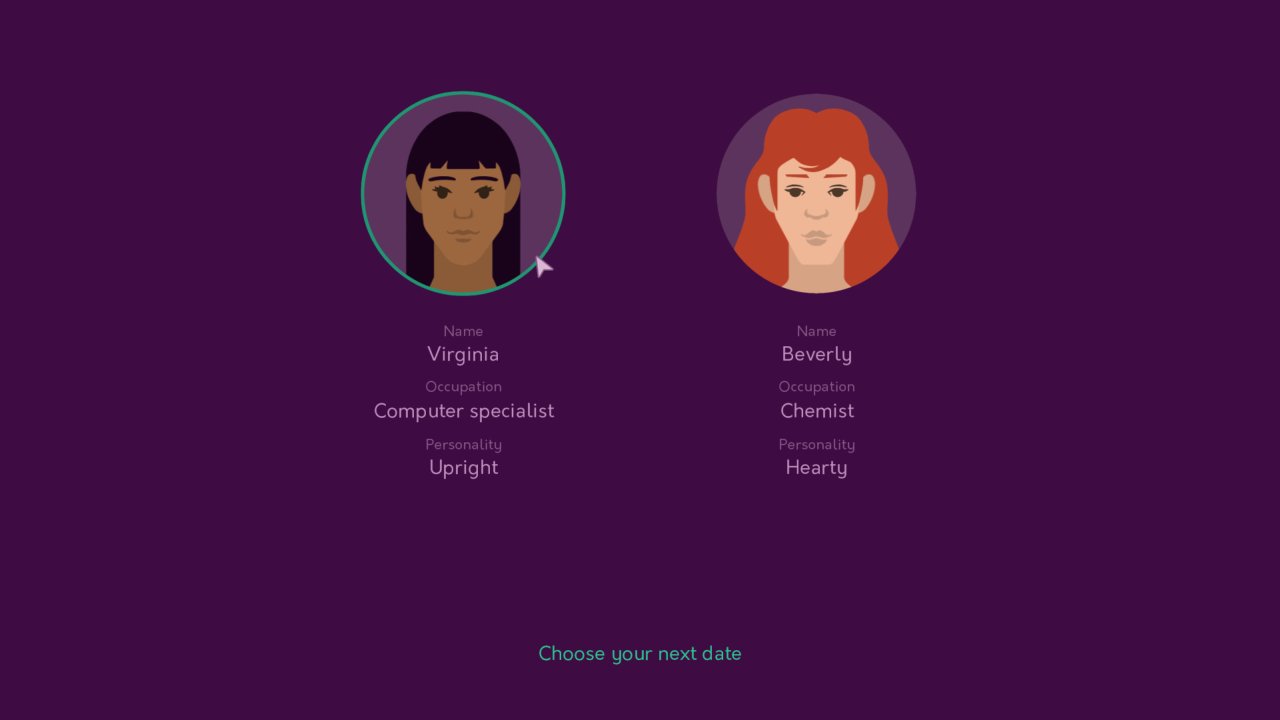 Still, I don’t think Puzzle Dating was meant to be a super serious puzzle game or even a long term investment. At $1, I’m sure even the developer knew that. This is mostly a joke game that is worth a laugh and is kind of cute. There isn’t any reason to try and complicate that further. Just turn off your brain and stop trying so hard with Puzzle Dating, much like how you should approach actual dating.

Our ratings for Puzzle Dating on PC out of 100 (Ratings FAQ)
Presentation
70
Puzzle Dating has a super clean and bright presentation that looks cute and conveys everything it needs to. The soundtrack might be limited, but it’s definitely soothing.
Gameplay
70
Following the rules of other match-three games, Puzzle Dating is basically Jewel Quest reskinned. There are a few unique gimmicks.
Single Player
65
You shouldn’t be going into Puzzle Dating looking for an epic campaign, but mostly just a quick way to laugh and kill some time.
Multiplayer
NR
None
Performance
(Show PC Specs)
CPU: Intel Core i7-3770 @ 3.4 ghz
GPU: Nvidia GTX 1060 6GB
RAM: 16GB DDR3
OS: Windows 10 Home 64 bit

95
Puzzle Dating can probably run on a literal potato as it never drops framerate or has any stuttering issues.
Overall
70
For $1, I cannot be too harsh on Puzzle Dating. It doesn’t offer a lot of content and it mostly exists as a joke, but it’s fun and cute enough to get by on charm alone.