Aporia: Beyond The Valley Review

Puzzles, walking, and horror in an uneven and unpolished mix

Mixing genres is one way that developers can make their games seem different from the rest. Although the individual pieces are not original, when taken as a whole they become something new. The tricky part is finding the right balance. Developed by Investigate North, Aporia: Beyond The Valley is one such mixed experience. It is primarily an open-world first-person puzzler, similar to The Witness, but it is also part walking simulator and part horror game. Not all of its pieces are equal in quality or quantity, and the end result is merely average. 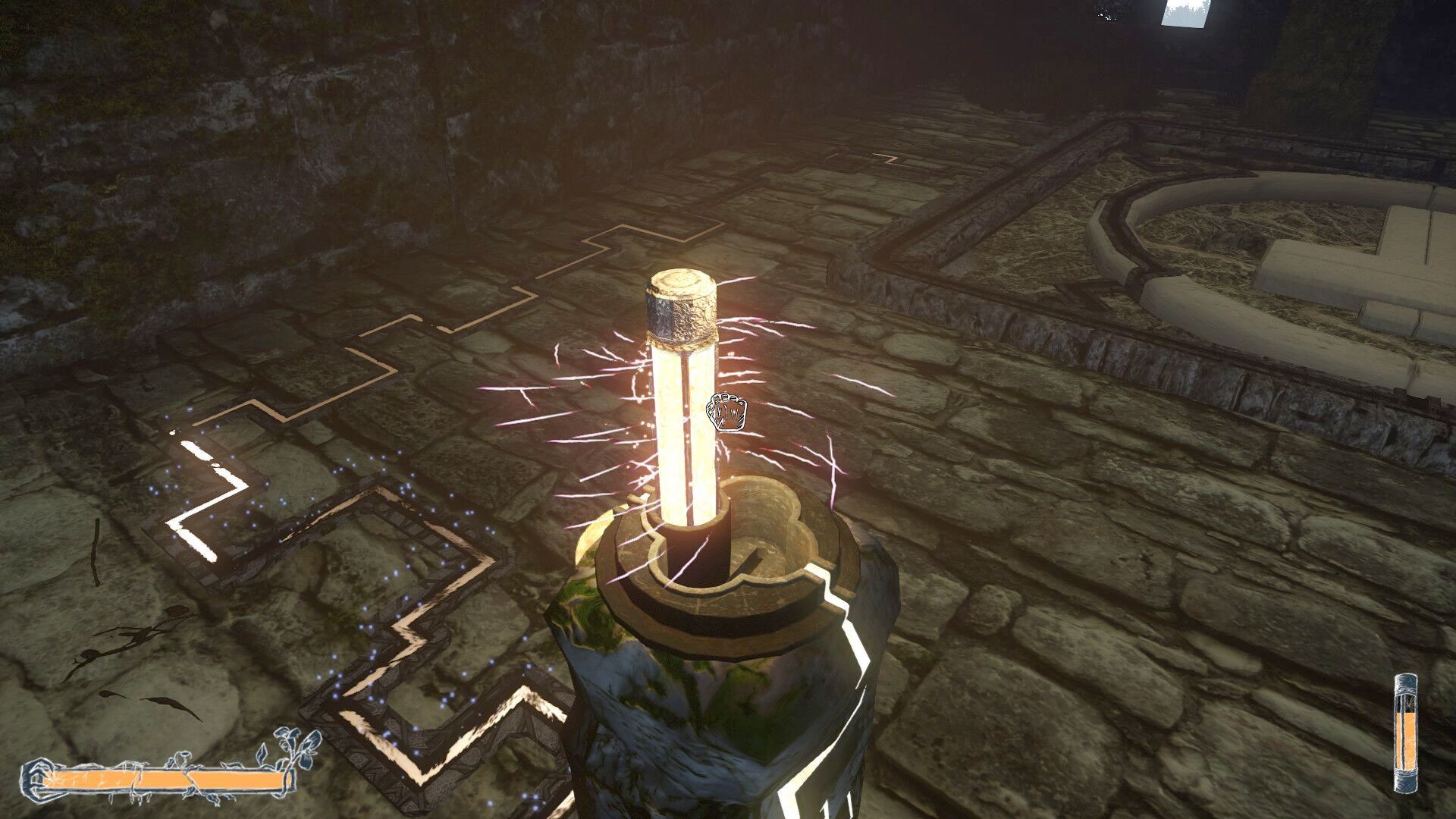 The game begins in somewhat typical video game fashion: you arise from a liquid-filled sarcophagus with no idea where you are or who you are. Drawings of humanoid figures on the walls indicate you were somebody of importance. The exit is locked, connected to a waist-high pillar via a conduit on the floor; this pillar is a switch that requires a portable hand-held cylindrical vial to operate.

The vial device you acquire in the first minutes is essential for navigating through the land of Ez’rat Qin. Along with interacting with pillars to open doors, it emits light. It can also project symbols, which are imbued into the vial as the game progresses. Although initially promising, the projected symbols are merely used to open doors like key cards. The final use of this vial is to grow plants quickly. Grown vines will function as ladders and flowering plants will provide a modest health boost that might be required should you fall off a ledge, stumble into charred earth, or come near a shadowy figure. All such actions (aside from emitting light) deplete the glowing amber liquid in the vial, so it must be refilled by collecting a limited number of flasks scattered around the world—don't worry, there will be ample to complete all tasks.

With vial in hand, you begin exploring the ruins of houses and courtyards outside your hibernation chamber. They are cluttered with human remains and the native plants have taken hold. Hundreds of years have passed since you were last awake. The details of the previous events are told somewhat ambiguously via animated pictographs that come to life when using the vial device with story-pillars. These moving pictures are well produced with shapes, colors, and music aiding the storytelling. Although they lack text or voiced audio, they are crafted well enough to convey their message with ease. 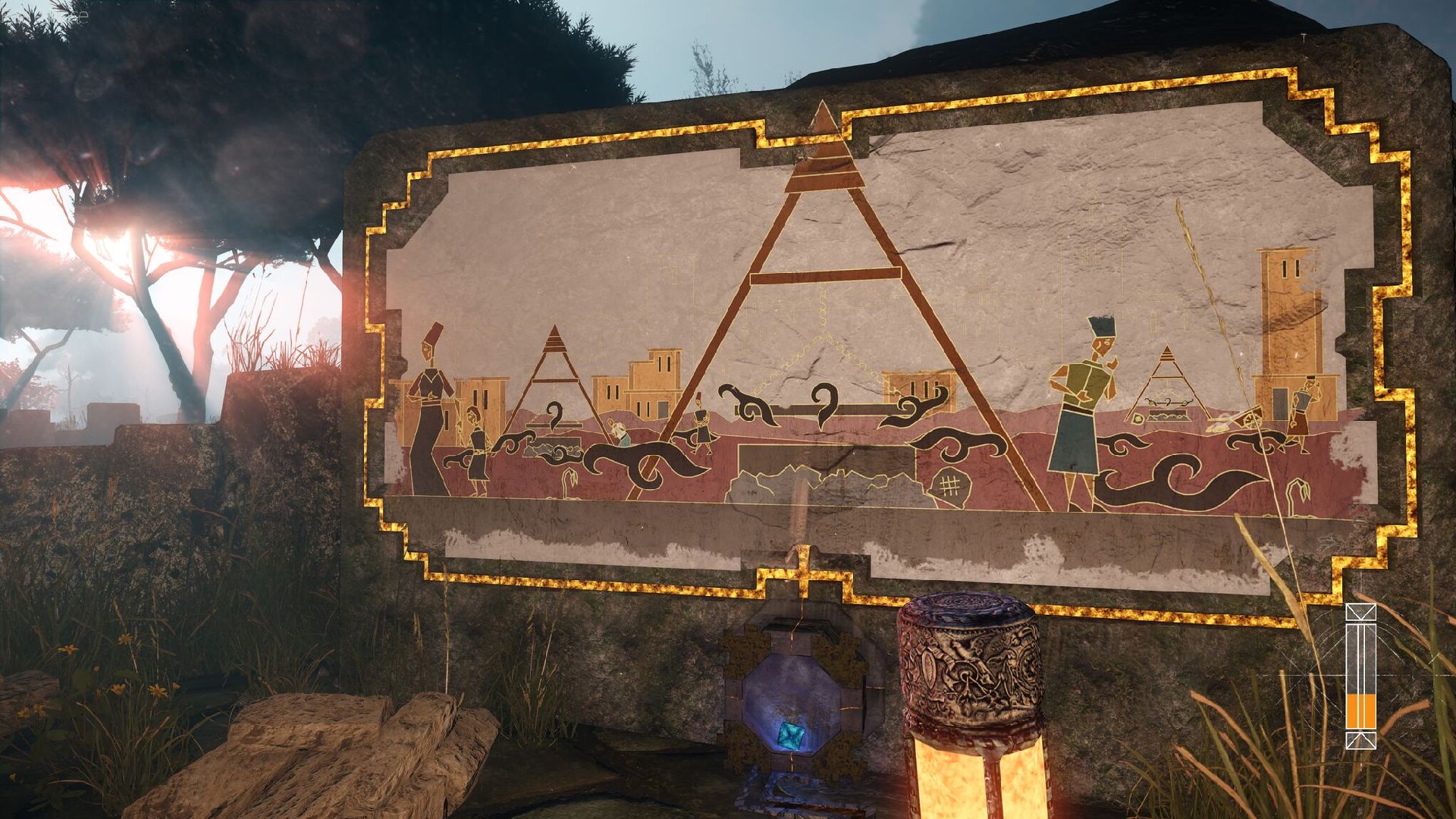 The pictographs explain that the civilization used their special vials in conjunction with vast fields of the medicinal plants to help the sick. But something went wrong, and the civilization was under threat of extinction. Many entered stasis, hoping to survive until the danger abated. You might be the last one that can save these people from eternal rest. The remainder of the story is interesting, but saying more would merely spoil the limited amount of history there is to uncover.

While the first and last parts of the game are fairly linear and heavy on context, like a walking simulator, the middle section takes place in the valley proper and consists of wandering around and solving puzzles in a non-linear space. With the help of a map, you must collect a few symbols that are needed to open a large vault-like door. These symbol pieces are usually found at the ends of the most complex puzzles, and they are practically impossible to miss.

There is decent variety to the puzzles found across the valley and a few good challenges. One of the main puzzles involved counter-weights and required players to jump on hanging stonework like something out of Half-Life 1. Diverting some water through narrow aqueducts was not much of a challenge, although it took a while because the hand-operated wheels were clumsy. Some optional puzzles just required the collection of nearby items which felt a little pointless. Near the end, there is light-beam puzzle that felt out of place and took too long to complete. While the variety is good, the puzzles are a little too dissimilar without the escalating training aspect found in other puzzle games.

Many of the puzzles are voluntary; they merely provide one shard of a stained-glass window. Finding all shards (more than a dozen) will unlock what is presumably—based on the near complete stained-glass window design—another of those story-pillars involving your own character. Despite scouring the valley for hours, after completing every visible puzzle, the final shard eluded my grasp. And in the process of searching for this obscure shard, the valley lost its lustre. 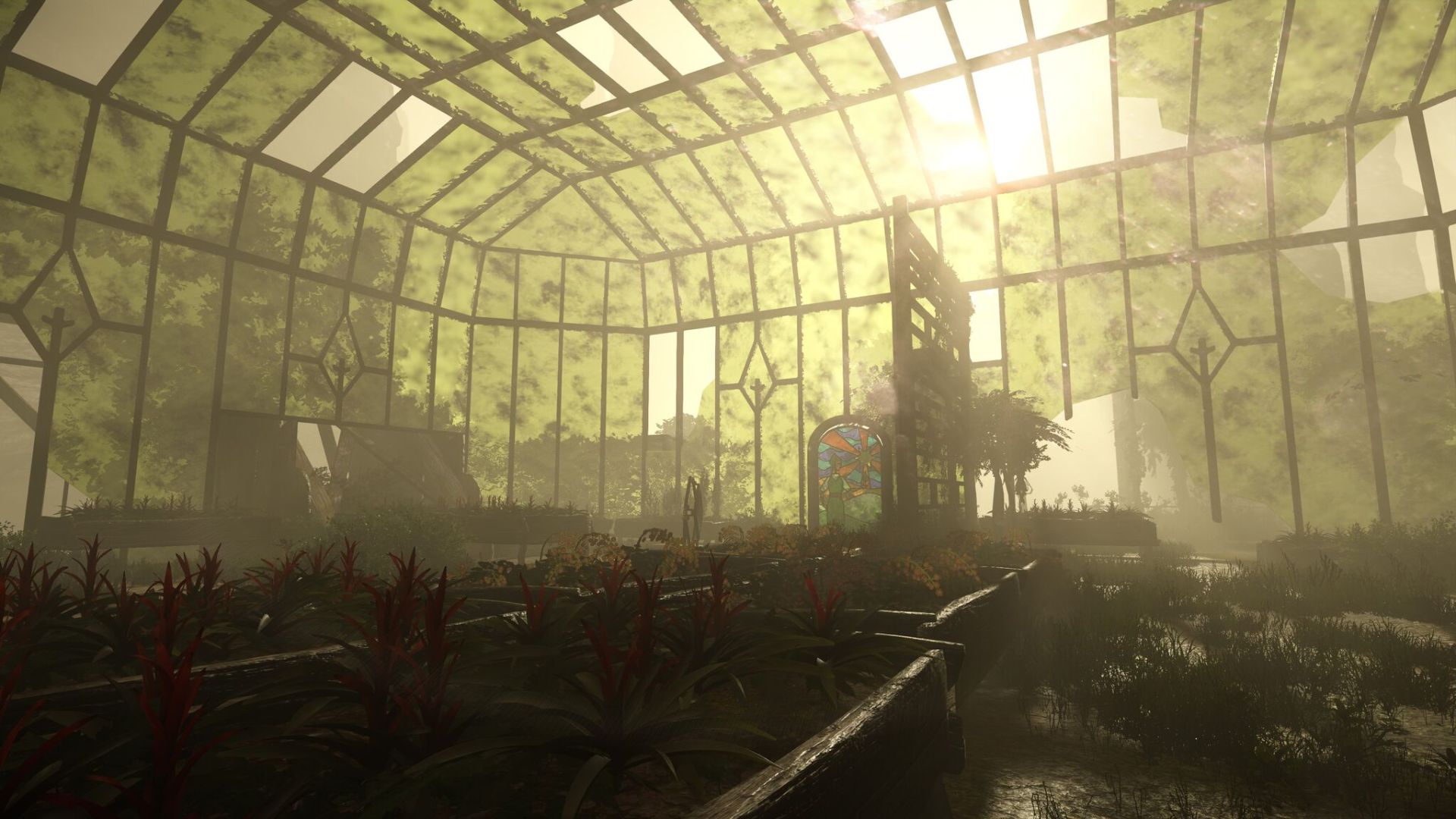 Rendered in CryEngine, the valley consists of ruins, waterfalls, forests, caverns, and lots of skeletons, but it starts to look rough after searching every nook and cranny. Boulders that are meant to block progress can be scaled over with sprint-crouch jumping. Fences that are designed to keep players contained can be walked on by carefully scrambling up a corner. Fast-moving water, designed to kill, wedged me against the shore, leaving me unable to move. Vine ladders mysteriously ceased to function after one use, sealing off pathways. Open-platform gondola lifts only worked in one direction, despite levers on both sides. At one point I managed to swim through a lake and dropped out of the water volume onto the lakebed. When searching for the last shard, there were too many times where I got trapped in geometry or found myself in an unintended area.

There are quite a few presentation issues to go along with these navigational gaffes. Rocks and grass hovered above the ground in many places. Sunlight bled through buildings and terrain. Volumetric lighting and god rays were occasionally so excessive that was hard to see beyond arm’s length. The misty rain travels with the player, seriously detracting from its intended atmospheric effect. Even water volumes extruded beyond their confines and had terrible reflections. Much like the recent Prey game from Arkane, soundscapes regularly cut in and out just moving around the world. Performance also suffered from erratic and drastic framerate drops for no obvious reason, and a few hangs occurred while areas streamed nearby. While the valley is large, it probably isn’t much bigger than some of the mid-sized levels in the original Crysis. And considering the areas before and after the main valley are more linear and still have similar issues, it is a shame the environments weren't more polished.

When you aren't solving puzzles and searching for shards, you may be sprinting away from a wraith that patrols the deeper and darker areas in the valley. Spotting this wraith for the first time is quite awesome, as the game transcends its puzzle/walking-simulator confines. While you may not know what it is, this hovering spectre quickly makes its purpose clear. If it gets close, you'll lose a chunk of health and will be transported elsewhere. The health it removes is paltry and it can be outrun without problem. During one wraith encounter, the floating creature warped and then self-destructed in a nearby house as it failed to find a path to me. So the wraith becomes a non issue, as long as you keep running. The horror element in Aporia is its weakest piece although at least the phantom is kind enough to not interrupt the puzzle-solving experience. 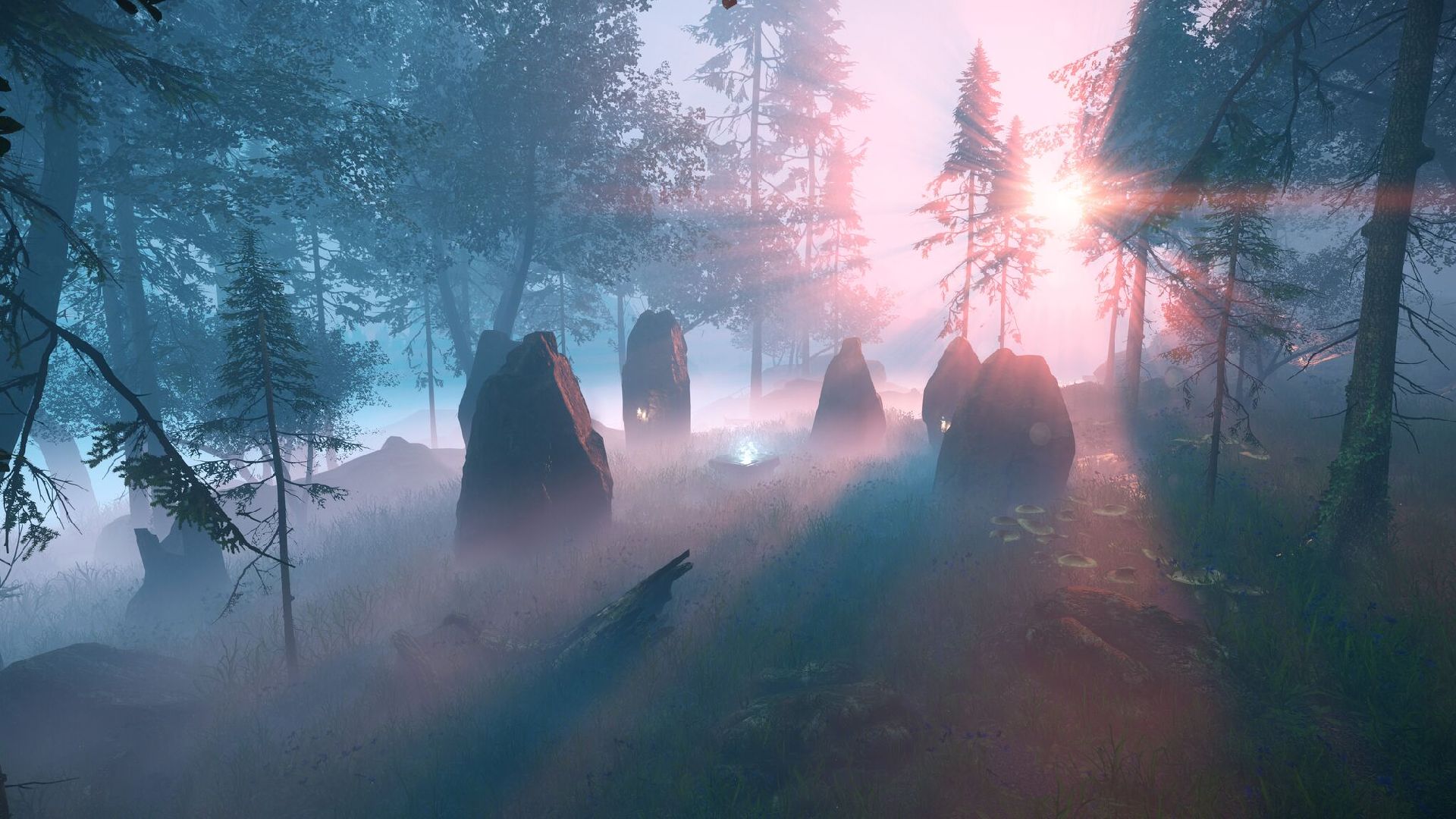 Aporia: Beyond The Valley is comprised of several pieces, but none really standout as successes. Perhaps the narrative is its best part, as it is told quite well via carefully drawn animated pictographs that convey their message effortlessly. But you'll spend more time solving puzzles, and while some are good, there is minimal cohesion and the quality is erratic. The horror element is shallow, although it is probably good that the wraith is barely a threat. Perhaps the most disappointing part of the game is the valley (and world) itself, as it is full of visual issues, navigational quirks, and framerate problems. Aporia: Beyond The Valley is not a game without merit, but it is hard to say if there is enough quality or entertainment here to make the valley worth visiting.

Our ratings for Aporia: Beyond The Valley on PC out of 100 (Ratings FAQ)
Presentation
55
Despite generally adequate use of CryEngine, there are numerous visual problems with the world like its overuse of volumetric lighting, faulty blockers or floating objects. Ambient sound cut in and out.
Gameplay
65
It has some good puzzles although there is minimal consistency and not much learning throughout. Some puzzles are trivial.
Single Player
68
Animated pictographs are of high quality and presented in a clever way to tell a decent story without words. It will take about 3-6 hours to complete, depending on your shard hunting success rate.
Multiplayer
NR
Performance
(Show PC Specs)
CPU: Intel i5 3570k
GPU: XFX RX 480 GTR Black 8GB
RAM: 16GB DDR3
OS: Windows 10 Pro 64-bit

52
Some crashes were observed. The world has many places in which to get stuck if you like searching every corner. Framerate dropped to single digits in some innocuous locations.
Overall
61
The story and puzzles are decent in Aporia: Beyond The Valley, so it's a shame that the world is roughly designed, there are consistency and technical issues, and the horror element is shallow.

Aporia: Beyond The Valley 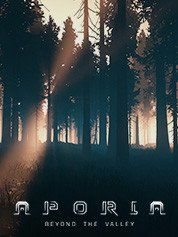 All videos for Aporia: Beyond The Valley (1)
Advertisement ▼