A slice of golfing paradise for the patient

I will preface this review by saying I have relatively limited experience with golf games and have not played the original The Golf Club, but do have plenty of experience with the actual sport. The Golf Club 2 attempts to simulate the trials and tribulations of the internationally popular sport both on and off the fairway, and does a great job of at least one of those. If you are looking for a relaxing golf experience, TGC2 is not for you. This is a golf game for golfers, or at least fans of the sport, and I suspect the difficulty might surprise a lot of players. If you don’t know the difference between a draw and a fade, or have no idea what ‘slicing the ball’ means, this probably isn’t the game for you. If these terms are familiar however, TGC2 might just be the golf game you have been waiting for. 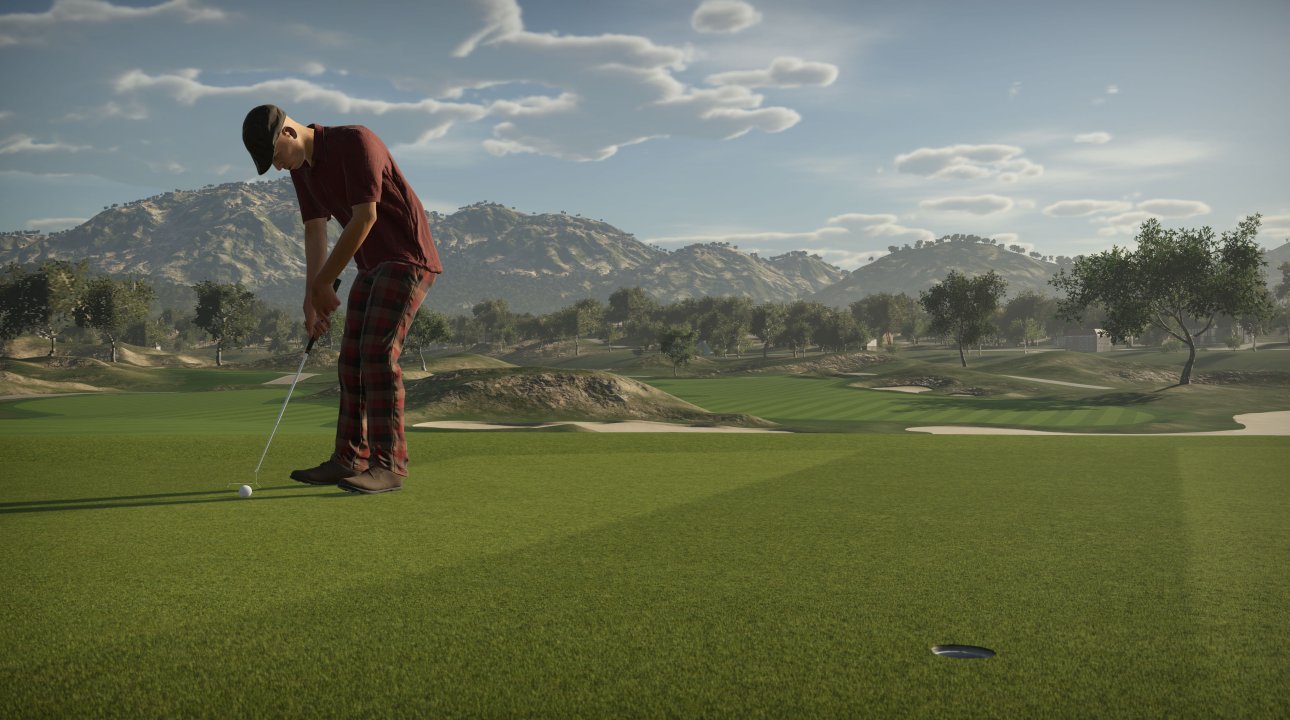 The initial learning curve of TGC2 is fairly steep. After a brief tutorial that teaches you the controls, it is up to you to make sense of the myriad options that exist for playing the game. You can go to the practice range for driving, chipping or putting. You can try playing an individual course, either an official one or user-made one. You can go into the career mode and take part in more formal events, or join an online society that lets you compete indirectly against other players in tournaments. You can even use the custom course creator to try and recreate a favorite local course, or build something crazy.

However you choose to play it, you will probably find yourself slicing balls into the rough and cursing loudly as your putts end up further away from the hole than before you hit it. The Golf Club 2 is a challenging game and simulates the sport quite well considering the limitations of using a controller or keyboard and mouse. Swinging the club involves moving either the right or left stick on a controller (your choice) or your mouse back and forth to emulate a golf swing. To hit a straight shot, you must try and go straight back and straight forward, and also have a good tempo. Even on the easiest settings, hitting a good shot is not easy as the game is quite sensitive to any deviations to the input. Pushing the analog stick a bit to the right or left on your downswing might send the ball veering off to one side. In some situations such as chipping or hitting out of bunkers, only a partial swing might be necessary and you must pull back on the stick just enough to give your shot the correct amount of power.

Once you get the basic swing down, there is still a lot you need to think about when making each shot. You can tweak the loft and angle of your club to try and hit a draw or a fade, or put some extra spin on your ball to prevent it rolling off the green or away from the pin. The game will generally give you a default club selection based on the situation, and you will often want to change it based on the lie of the ball and whether or not it is in the fairway. If your ball is in the rough, you might want to use a longer club to make up for the distance that will be lost. If the ball is above or below your feet, you need to compensate by aiming to the right or left since as in real life you will tend to hook or slice the shot under these circumstances. You will need to take into account if the hole is higher or lower than your current position which could alter the travel distance of the ball. Those with a good knowledge of golf should feel right at home with these intricacies but more casual players might become frustrated by their shots not always going where they expect. 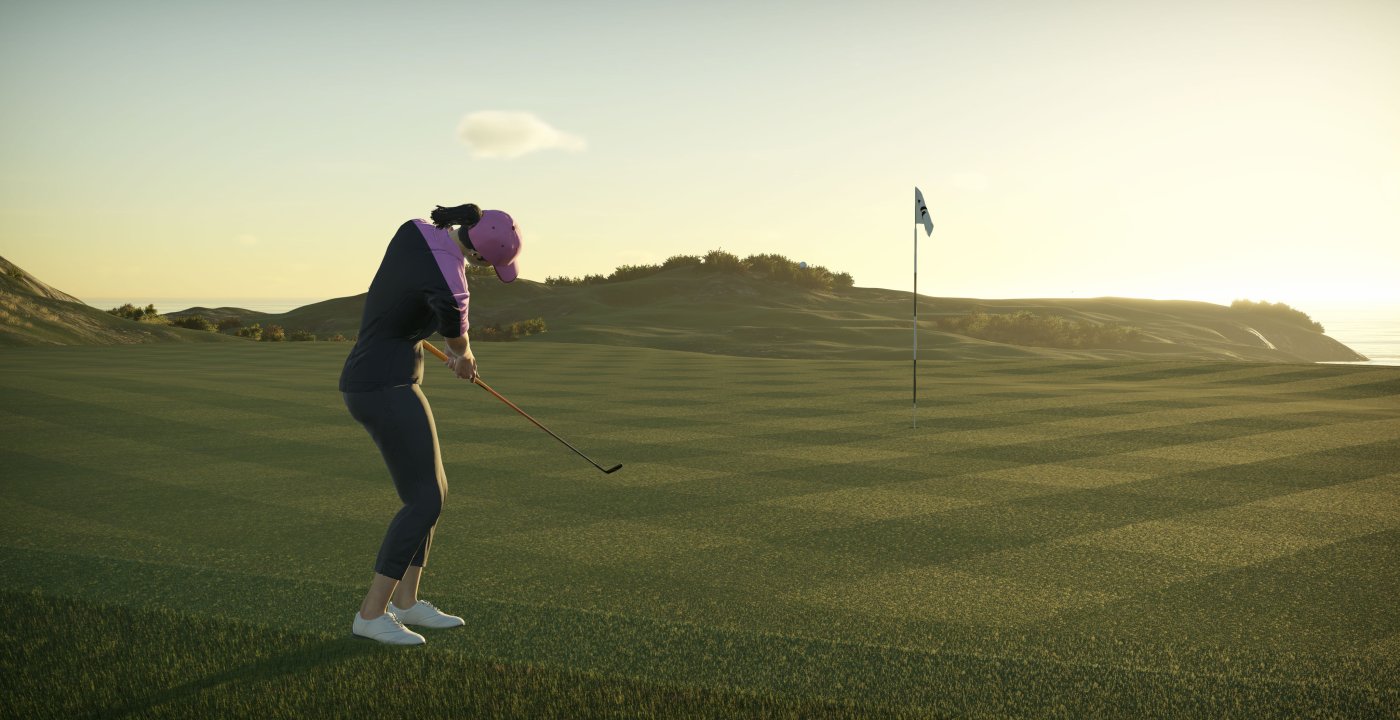 Once you get the ball on the green, you will have to deal with the game’s quite realistic putting mechanics. As in real life, different courses have greens with varying types of grass that drastically change how quickly and how far your ball will move. As with other golf games, a grid overlays the green indicating where the slopes are, and you must try and figure out how much the ball will break when you hit it. Calculating how your ball will travel across the green when you have different slopes and speeds to contend with can be quite a challenge, though as an approximation of the real thing the putting mechanics are difficult to fault.

Early on when learning the mechanics, I found myself struggling to get par on most holes but eventually got a feel for things and was able to make shots more consistently. There is a great selection of official and non-official courses present and once you get a feel for the game, you can test your skills on increasingly challenging terrain. The centerpiece mode for TGC2 is probably the career, which is highly customizable. The career has you playing through different seasons, where you compete against AI opponents for points across multiple events, with each event involving multiple rounds on the same course. You can load season templates, or create custom seasons, determining things like how many rounds you play on each course, which tees you use and how skilled your AI opponents are. I did encounter one strange issue during the career where a few times opponents’ scores changed significantly between rounds, in a way that makes it seem like AI scores are adjusted so that there are always a few players close to you.

You can also level up your career society, which ties into the somewhat bewildering ‘Society’ system that attempts to tie everything in the game together. It seems you have your own society tied to your career, but can also create and join other custom societies. In public societies you can compete indirectly in tournaments to win money (there is no proper online multiplayer), though I never really understood the purpose of my career society or saw the benefits of leveling it up, which costs money you can otherwise spend on extensive customization items for your player. This entire aspect of the game is somewhat poorly explained and didn’t really add much to the experience for me, though I can see it having value if you want to compare your scores to other players or create a group with some friends. 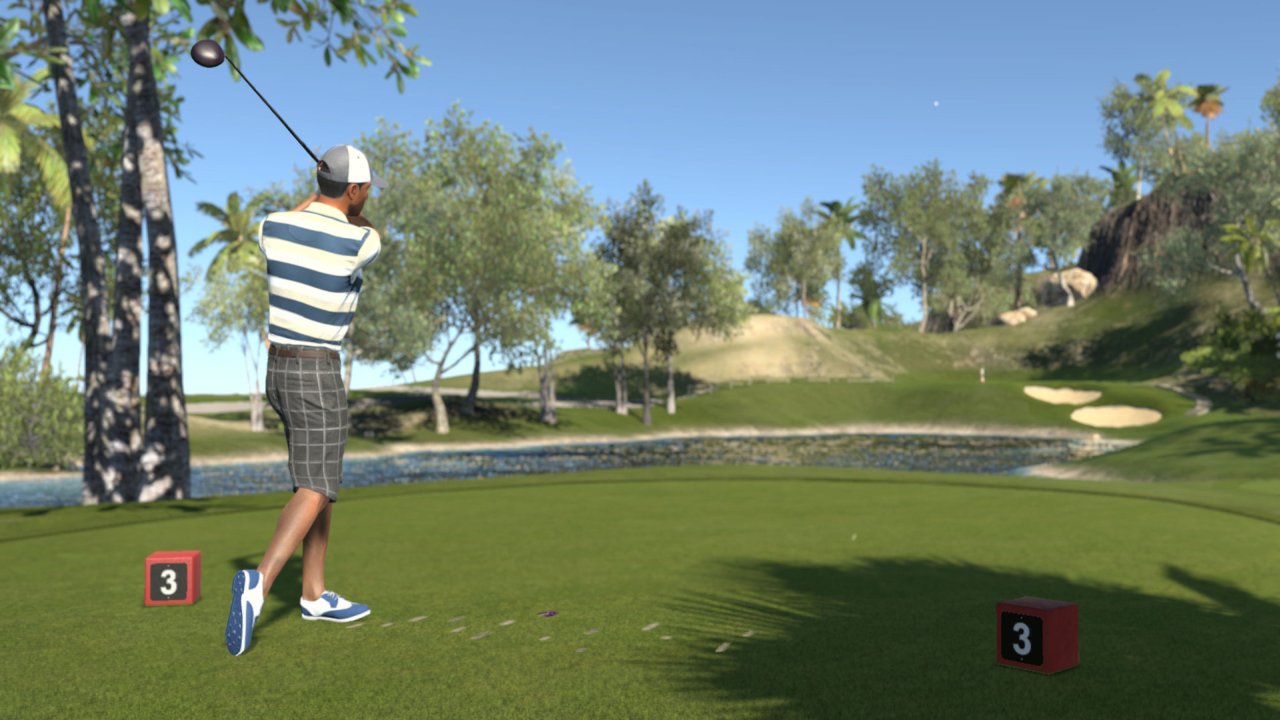 While the lack of proper online multiplayer is disappointing, The Golf Club 2 is well set up for local multiplayer. You can add additional players up to 4 in any mode for local play and this seems to work well. Otherwise you will be competing against the AI, or at least their scores. By default just about everything you do in game will be narrated or commentated. Playing individual games, the commentator takes on the role of a golf instructor, giving you some helpful tips and commenting on the quality of your shots. In tournaments, it is more formal, like the kind of commentary you might hear for a major event on TV. This is generally well done, though you will start to hear the same lines after a while and might wish to turn it off due to repetition in the long run.

The rest of the game’s presentation doesn’t hold up quite as well. Visually the game appears quite dated, with the Unity engine producing mediocre visuals with flat lighting, poor texture quality and occasionally flickering shadows that might distract you, especially when putting. Hitting out of the rough reveals hideous low quality vegetation. The animations for golf swings are at least well executed, and the game runs very well. The audio is overall fine with satisfying cracks when you hit a ball well, and the music that plays in the menus is soothing, but there is none when on the course.

If you are in the market for a simulation style golf game, The Golf Club 2 is overall an excellent choice, especially on the PC where there aren’t many alternatives. Even though the society mechanics are poorly explained and those unfamiliar with the intricacies of golf might find the learning curve a bit steep, the game replicates the feel of the sport extremely well, and there is enough content to keep players busy for hours.

Our ratings for The Golf Club 2 on PC out of 100 (Ratings FAQ)
Presentation
65
Visuals are serviceable at best, though the narration and audio in general is quite well done. The user interface is slick and informative.
Gameplay
85
The Golf Club 2 has deep and satisfying mechanics, with perfect shots being relatively rare but pursuing them proves rewarding. There are lots of options for customizing difficulty and a great variety of courses that all have different conditions and variables to mix things up.
Single Player
75
The career mode is a good way to progress and gauge your improvement, though it is a little dry overall. The amount of official and custom courses is quite good. Lots of options for both single rounds and career events.
Multiplayer
70
The local multiplayer options are great, but the lack of online multiplayer is missed and the Societies system is poorly explained.
Performance
(Show PC Specs)
CPU: Intel i7-6700k @ 4.0ghz
GPU: Nvidia GTX 1080 8GB
RAM: 16GB DDR4
OS: Windows 10 Pro 64

80
The game runs very well, though annoyingly you need to be online to play the career mode as it ties into the Societies system.
Overall
78
The Golf Club 2 is a satisfying and challenging golf simulation that succeeds thanks to the depth and quality of its core mechanics and number of courses available, despite a lackluster visual presentation and lack of proper online multiplayer. 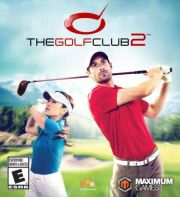 All videos for The Golf Club 2 (3)
Advertisement ▼