Enough has been written (even by me) about the potential ups and downs of games based on movies. Some are good, and some are not so good, to put it lightly. But take a seasoned developer, and give them a well-known property that already has the hallmarks of being adaptable to the interactive medium, and more often than not we end up with at least a decent experience, one that can be appreciated by more than just fans of the feature film. That’s the same sort of approach that Warner Bros decided to go with for Cars 3: Driven to Win, recruiting the team at Avalanche Software (who most recently worked on the Disney Infinity franchise). Cars 3 offers a decent kart racing outing with just enough content and authenticity to entice fans of the movie, but a high price tag and lackluster presentation is likely to keep the general gaming audience away. 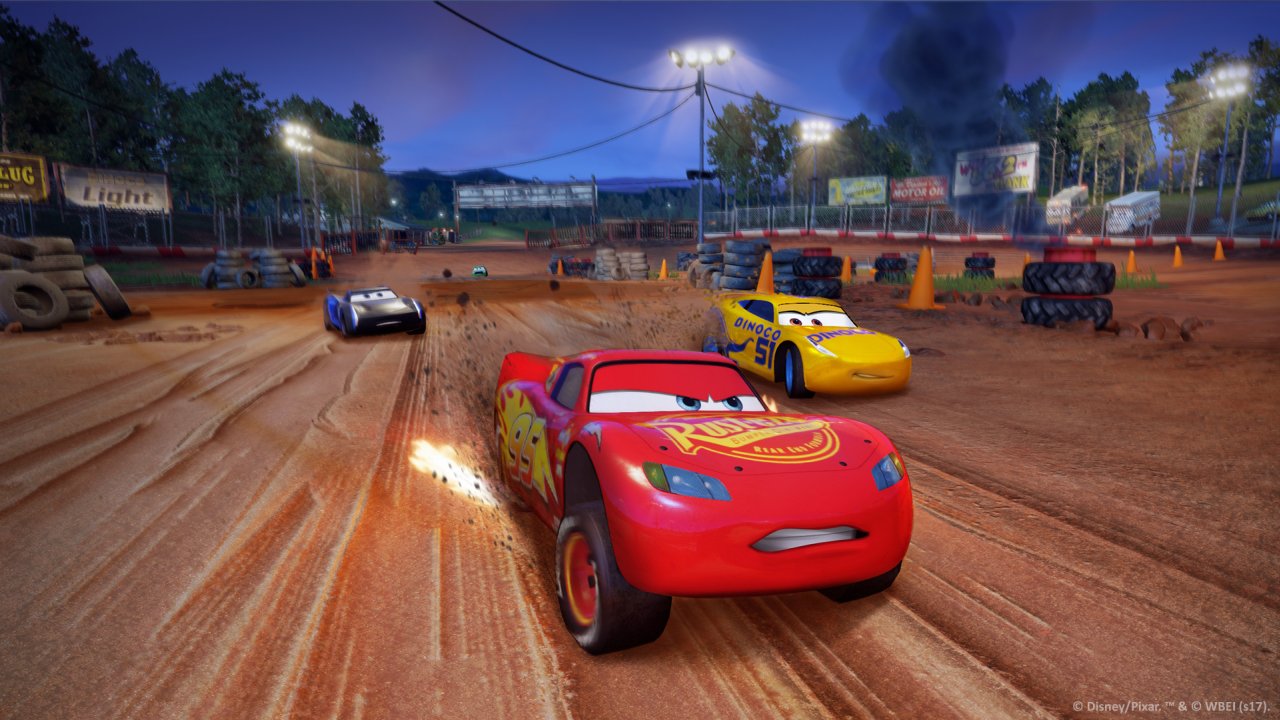 Movie game adaptations typically come in a few different design mantras; you could simply re-tell the story of the film, write a new story of your own, or just forgo a narrative altogether in favor of pure gameplay. Driven to Win opts for the latter – and it works okay, given that racing games aren’t expected to have a story campaign anyway. There isn’t even a shred of story in the game, besides an intro and the occasional cutscene; you pretty much pick a discipline and head to the starting line. As far as authenticity of the content though, the game does a good job. Players choose from many of the franchise's characters, be it Lightning McQueen, Mater or others, and take part in a series of competition events on tracks that are inspired by the film’s locations. Younger fans in particular should be quite satisfied with the immersion here; characters will often quip at each other and there are a few gags along the way. Though sadly these are not the same voice actors from the movie.

However, adults may find the presentation quite lacking otherwise. The audio design is fairly basic, and those interactions between the car characters become repetitive quickly as there are not many lines. And the more you hear them, the more realize how maybe it wasn’t all that funny to begin with. The visuals are faithful to the movie in their art style, and there’s a certain level of charm that seems somewhat similar to the style that Avalanche used in Disney Infinity. The technical presentation however is on a rather lower level. The game was released for current and last-gen consoles, and it’s clear that the older hardware was used as the baseline for this release. On Xbox One the game often looks blurry and lacks detail, not to mention low resolution textures and some odd animations. It’s decidedly last-gen, and certainly not what a full-priced modern Xbox One release should look like.

Perhaps part of the reason for the full $60 price tag is the wealth of content, and there is some merit in that theory. The entire game includes just over 20 vehicles/characters, and though there are no explicit stats, they feel slightly different to drive. Cars 3: Driven to Win is a kart racer, obviously inspired by the genre leader Mario Kart, with many of the gameplay design mechanics following in the same ilk. Imitation isn’t necessarily a bad thing though, as the game does a few things fairly well. Driving, drifting, and performing stunts such as driving backwards and on two wheels is easy to pull off, and can be quite satisfying. Controls are responsive and mostly precise. Performing stunts builds your boost meter, which is needed to remain competitive and come out ahead. While the driving itself is fun, other gameplay elements can become quite frustrating – mainly the rubberbanding of the AI and their aggressiveness that will constantly keep you on your toes. In the second half of the game, it was pretty much required to take most of the available track shortcuts and use boost constantly in hopes of winning. It means less pure racing, and more endlessly spamming tricks and nervously avoiding collisions. The game’s difficulty seems rather high for a kart racer, let alone one aimed at a younger audience, and that’s on the medium setting. Thankfully, there is an Easy setting, as well as options to autodrift. 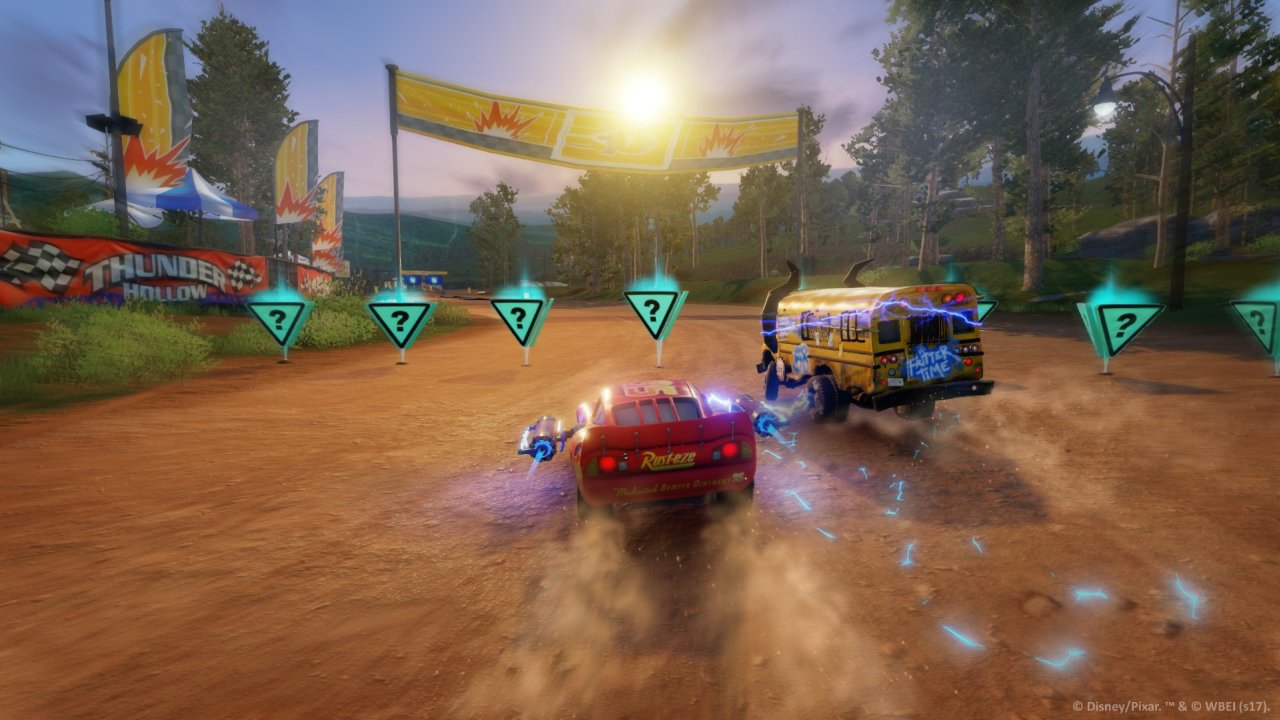 You’ll be racing across about 20 tracks, in just over 10 environments – basically there are some versions of each track during multiple times of day. The tracks are inspired by the locations from the film, which again adds to the authenticity of the game. While they are designed well enough for a kart racer, with lots of secret routes and good drifting opportunities, there are a couple of flaws. It will take multiple laps on each track to figure out its shortcuts, but more importantly, which objects are breakable and which will end your momentum. It’s also not always clear where to go, so again there is a learning curve that you don’t typically expect from the linear racing tracks of this genre. There are also some track sections that are obviously quite similar to other locations, but at least you know what to expect.

As mentioned, not all cars (plus their customization items) and tracks are available from the start – many will need to be unlocked as you make your way through the game’s extensive progression system. Essentially it is a huge checklist of 136 items. These “skill checks” are basically feats that players need to pull off. They include driving backwards for a lap, remaining on two wheels for over 5 seconds, side bashing three opponents in a race, and so on. There’s a wealth of gameplay and race tasks, and they unlock mostly naturally as you play; though of course for the later ones will take more time, like driving on two wheels for 20 minutes total, and getting 3 stars on multiple races. If you’re an achievement-hunter type, this sort of progression system is satisfying because you know exactly what’s required, and how to do it. You can earn the checks in any event.

There are six different event types. Standard race is self explanatory; then there’s Battle Race, which fans of Mario Kart and the previous Cars 2 will be familiar with. Players pick up randomized items on the track which turn into weapons, ranging from missiles and bombs to oil slicks and spike strips. You use this weaponry to make your opponents suffer and slow down, but they can also do the same to you. Similarly, the Stunt Showcase events take away the weapons and put emphasis on doing tricks - car that scores the most points wins. As mentioned earlier, both these events can be quite frustrating depending on the AI ganging up on you or forcing mistakes and breaking your stunt chains. The races can be quite long too, making the frustration build if you are bested in the final moments of a race. There’s also the Master-Level events, which are special races against specific, fast opponents. You guessed it; these can be frustrating because of the rubberbanding problems. 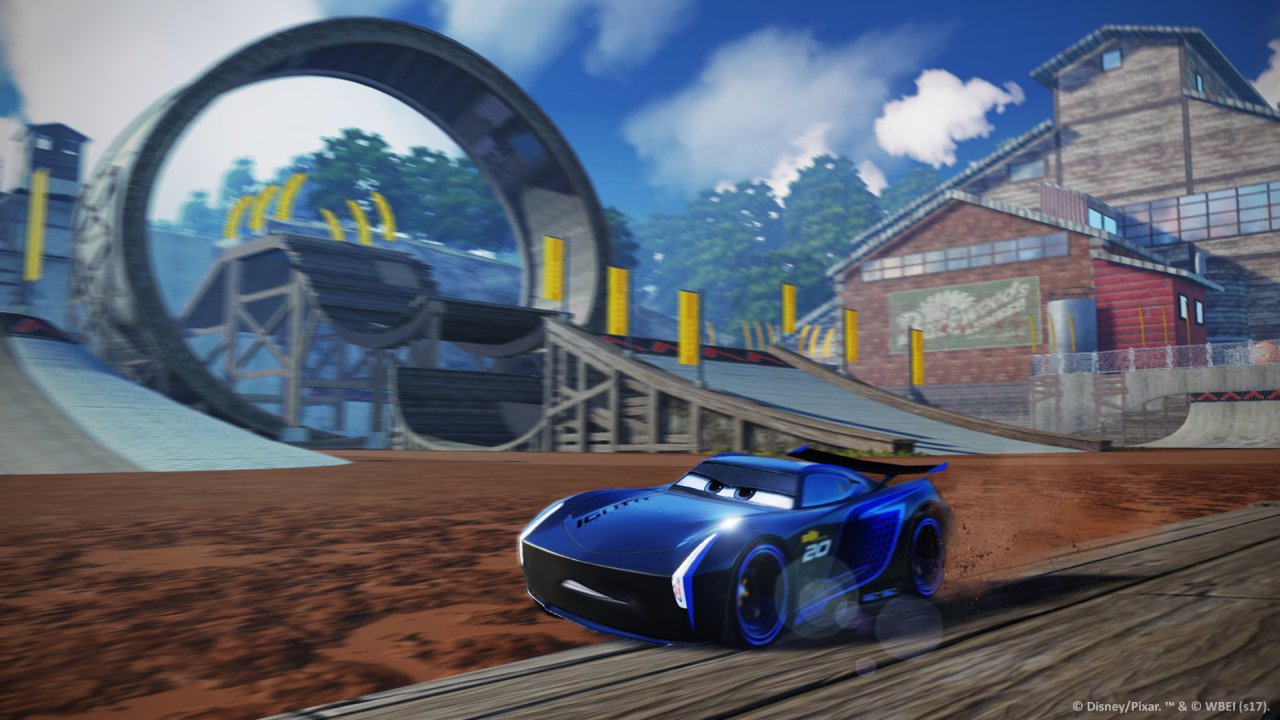 If you’re looking to unwind, there’s Playground event type. In this mode, you simply explore the area and try out tricks, find collectibles and just relax like you would in a Disney Infinity hub world. It’s also a good place to practice, given how challenging the main events can be. But perhaps the most interesting mode that Cars 3 has to offer is Takedown. In this activity, you race around the track and pick up weapons as if in Battle Race – however, the goal is to take down waves of nameless cars that spawn in front of you, in a horde-mode-lite fashion. It’s possibly the most purely enjoyable mode in the game, as there are no frustrating AI components to deal with; just destroy as much as possible in the allotted time. The enemy waves do have larger vehicles that shoot back, but you’re able to dodge this gunfire because you can see it coming.

If you wanted to alleviate the issues with the AI, multiplayer may have been the logical way to do so; but, Driven to Win only offers is local split screen, and no online functionality. For a kids-focused game, it makes sense, but still unfortunate. You and up to three friends can care together, and get into the Sponsored Team Play mode. This contains the same events and content as your single player career, and anything you’ve unlocked can be used in local multiplayer as well.

Cars 3: Driven to Win tries to be a faithful adaptation, and in some areas it succeeds. The pleasing art style and capable audio design will keep kids entertained. The absolute wealth of content includes plenty of goals to strive for that will keep players busy, racing through the solid number of tracks using a good vehicle selection. But sadly it won’t be long before you run into the frustrating difficulty caused by the rubberbanding AI, who also repeat their voice lines. You’ll be forced to constantly perform stunts instead of racing in order to keep up and have a chance of winning, and get annoyed when a single mistake ends a very long race event. Takedown is great fun though, and the playground is a nice area to explore. For a full priced title, Cars 3: Driven to Win may have the content and art style, but it lacks the gameplay polish and presentation quality expected to earn a recommendation for anyone but young fans of the movie playing on easy difficulty.

Our ratings for Cars 3: Driven to Win on Xbox One out of 100 (Ratings FAQ)
Presentation
50
While the art style closely resembles the movie, the technical quality of the visuals and audio design are not up to par for a modern full priced release.
Gameplay
62
While the driving and stunts are relatively fun for a kart racer, AI annoyances and inconsistent track design will leave players frustrated on anything but the easy difficulty.
Single Player
73
There are plenty of events to do, and the global progression system gives you reason to do them. Many tracks and cars from the film to unlock, as well. A variety of modes will keep things fresh.
Multiplayer
70
Though lacking online play, split screen works well.
Performance
90
No major issues.
Overall
64
Cars 3: Driven to Win has the potential to be an enjoyable enough kart racer, with plenty of content and true-to-film art style. Unfortunately, frustrating AI and poor presentation, on top of a full asking price, keep this title from reaching a podium finish. 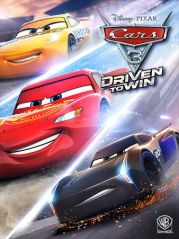