The Indiecade booth is a bit of an oddity at each year’s E3 show. While much of the show floor is covered with towering booths, heavily branded with logos of the publisher, and giant LED screens showing off the most recent trailers from the press conferences of the past week, the Indiecade booth is a quiet and simple affair. There are a few flags that indicate the booth’s existence, but it certainly lacks the opulence one often encounters while wandering the floor. In fact, you’d be forgiven for failing to realize the booth even existed. 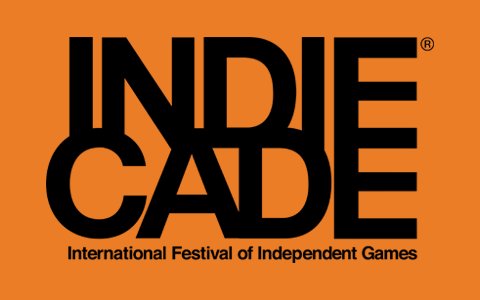 The booth - it’s such a departure from the rest of the floor I hesitate to even call it a booth - is a series of stations for each game, most manned by a developer with a sign next to the station in order to promote what you are playing. While the rest of the show is demonstrating the latest in technical prowess, the Indiecade is showing off pixel art. And while it would take three hours in line to play games like Far Cry 5 or Shadow of War, it took only a few minutes for a seat to open up for an Indiecade game.

But different isn’t always bad. In fact, after a day of running to appointments, waiting in lines, and slapping on headphones to hear how heavy the bass could get during an explosion, something like the Indiecade was a welcomed change of pace - an opportunity to get as close as you can to developers, to speak with people who have a singular passion and drive. And the best part of the Indiecade is seeing games that resemble nothing else - not only at E3, but in all of games.

Below is a brief game-by-game breakdown through my Indiecade 2017 experience, and while I’m sure these games won’t sell nearly as much as the next South Park or Wolfenstein, they certainly each have something special in their own right. 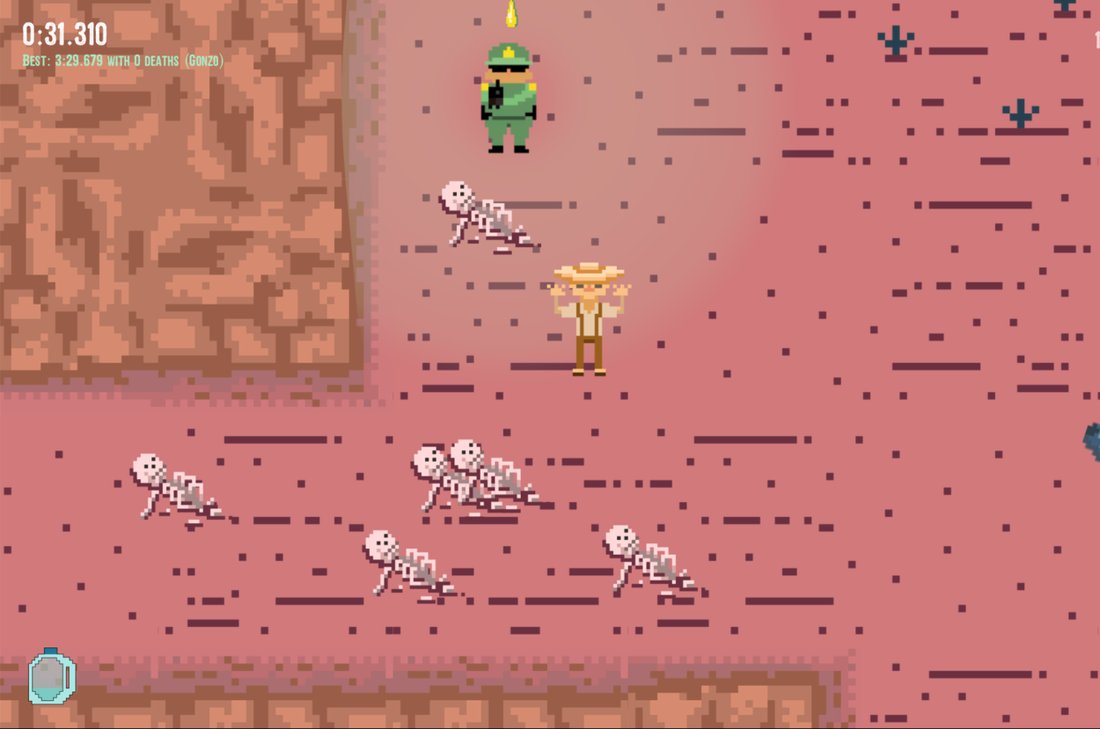 The first game I saw on my tour of the Indiecade booth was Borders, a stealth game from Gonzzink. Upon first glance, you’d be forgiven for thinking that Borders was archaic, in terms of aesthetic. There’s a lot of pixel art in games these days, but Borders animations are exceedingly simple. Yet, Borders is certainly more than meets the eye.

Created during a game-jam, Borders tells the story of developer Gonzalo Alvarez’s parents, who crossed the Mexican-American border in search of a better life. There’s little additional substance to the game beyond the simple controls and premise, no cutscenes to try and win over the audience, no stakes aside from crossing the border in search of a better life. The design is barebones, yet effective.

The gameplay largely consists of hiding from border control guards. While the game starts off pretty easy, the addition of dogs and other dangers makes the experience that much more difficult as you progress, including your character's continual need for water and scarcity of it in the desert.

Aside from the pixelated expression of the unforgiving Mexican wilderness, the other aesthetic choice Alvarez has made is leaving the skeletons of all your failed attempts on the screen. This specifically created a ghastly sight as thousands of skeletons littered the Mexican wastelands, the failed efforts of fellow E3 attendees. The game is out now, and you can name your own price.

A Case of Distrust by Ben Wander 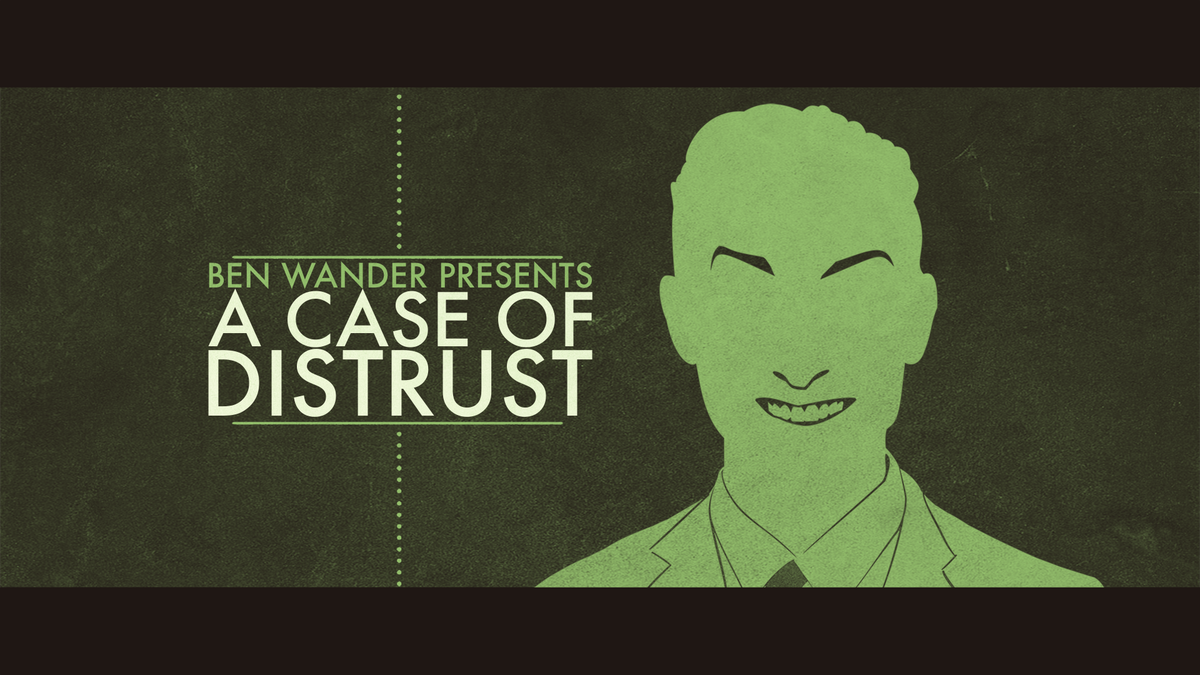 The next game I saw was A Case of Distrust, a noir detective adventure set in 1924 San Francisco and featuring PC Malone, a female private eye, trying to scrape together a living in a profession largely dominated by men in the mid-20’s.

The visual novel has a style that is similar to Simogo’s mobile game, Device 6, sharing inspiration from artist Saul Bass. The game is immediately interesting with it’s beautiful artistic contrast and creative use of art design that blends with gameplay.

But as a visual novel, the writing is really what needs to be good and I’m happy to say that I quite enjoyed writer Ben Wander’s script - at least the little bit that I played. Wander does an excellent job of channeling the hard-boiled, pulp detective novels from which the game clearly draws inspiration, but also adds a contemporary flavor to the writing. He also challenges the unique way that having a female protagonist in a 1920’s detective story would change the narrative. The game should be released later this year. 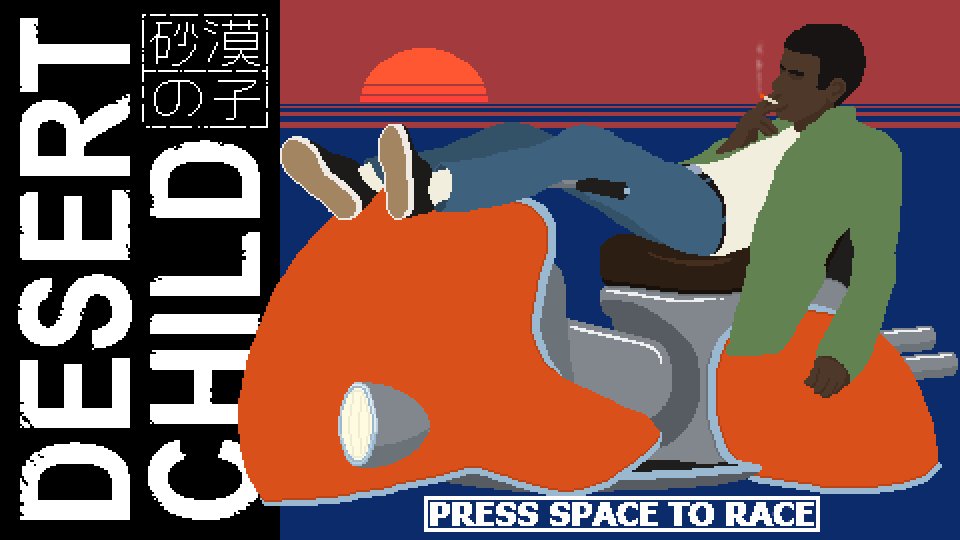 Desert Child might have been the most traditional video game I saw at the Indiecade booth. A sci-fi racing game, set in a post-apocalyptic wasteland; the desert-like, Australian-envisioned world is reminiscent of Mad Max, while the fast-paced motorbike action reminded me a bit of Akira.

That being said, Desert Child is an RPG all its own. Players compete in dangerous races, using boost powers to gain an edge on their enemies, and firepower to slow them down. The gunplay and action are really something fun, while the racing aspect feels unique but at the same time an easy fit for the design.

After you’re done racing, players can take their winnings and spend the money on food, weapons, bike repairs, and other elements that can help them win the next race. The matter-of-fact way the racing and post-race gameplay is presented is interesting in its own right. There’s never commentary on how barbaric the whole thing is, it just seems to be part of this apocalyptic culture. Desert Child is set to be released in Q3 2017.

Where the Water Tastes Like Wine by Dim Bulb Games 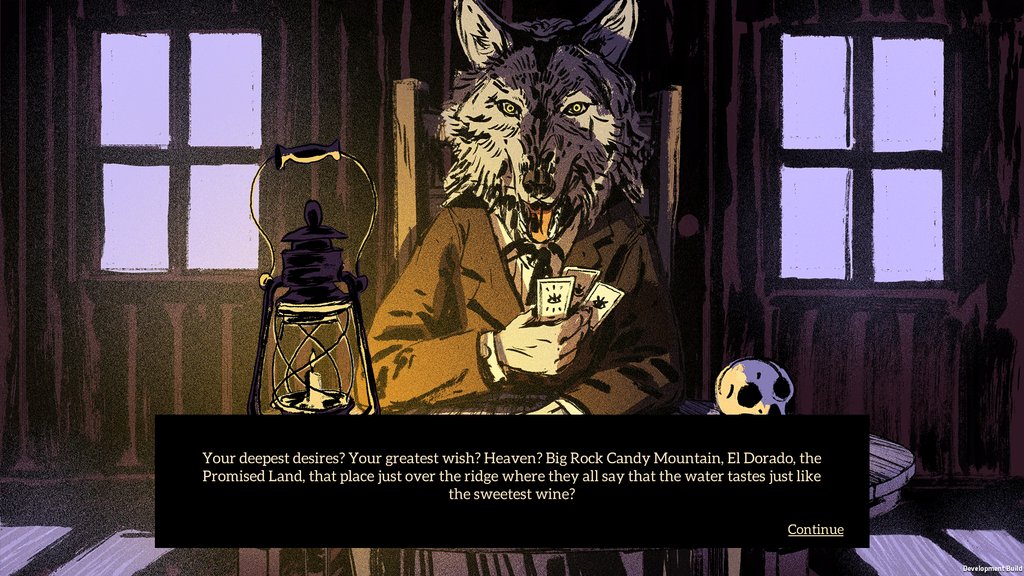 While the Indiecade booth boasted numerous great games, nothing was as unforgettable as the demo for Where the Water Taste Like Wine. A haunting journey through depression-era United States, filled with bluegrass folk music and strange folk tales.

Players take control of a homeless vagabond, wandering the south in search of place to lay their head each night. Along the way they encounter the horrors and oddities one finds in the emptiness of rural America, then when they make camp for the night they trade stories with the characters who share their campsite. If you tell stories to the liking of your campfire friends, they’ll tell you things about themselves as well.

As your travels progress and you meet more people in the game, stories that you have told will start to be told back to you, the details slightly embellished as the stories become tall tales. With haunting art of an America that is in decay and somber bluegrass music, the demo of Where the Water Tastes Like Wine was truly something wonderful. The game is set to be released in 2017.

This was only a small taste of the games that were at the Indiecade booth, and I wish all of them could get the same amount of attention. From the unique strategy game Delphyq to the empathy simulator Cat in the Hijab, there’s incredible variety and fresh ideas to challenge the status quo in indie games these days. You should check out what they have to offer.

Desperados III Review
Clearing the bayou, with a revolver or voodoo
Posted 12 days ago