We take a second look at the upcoming vampire game

Those who enjoyed the popular adventure Life Is Strange may be somewhat surprised to discover that Vampyr hails from the same team, DONTNOD Entertainment. High school drama in Oregon has been swapped with vampiric shenanigans in grimy early 20th century London. Instead of Max, we step into the boots of Jonathan Reid, a man recently turned into a vampire while Blighty’s capital is in the grip of the Spanish flu. Choice, however, is still at the forefront of gameplay. As Jonathan comes to terms with his new abilities, he must determine just how he will harness his power and shape the streets of London for good or ill. 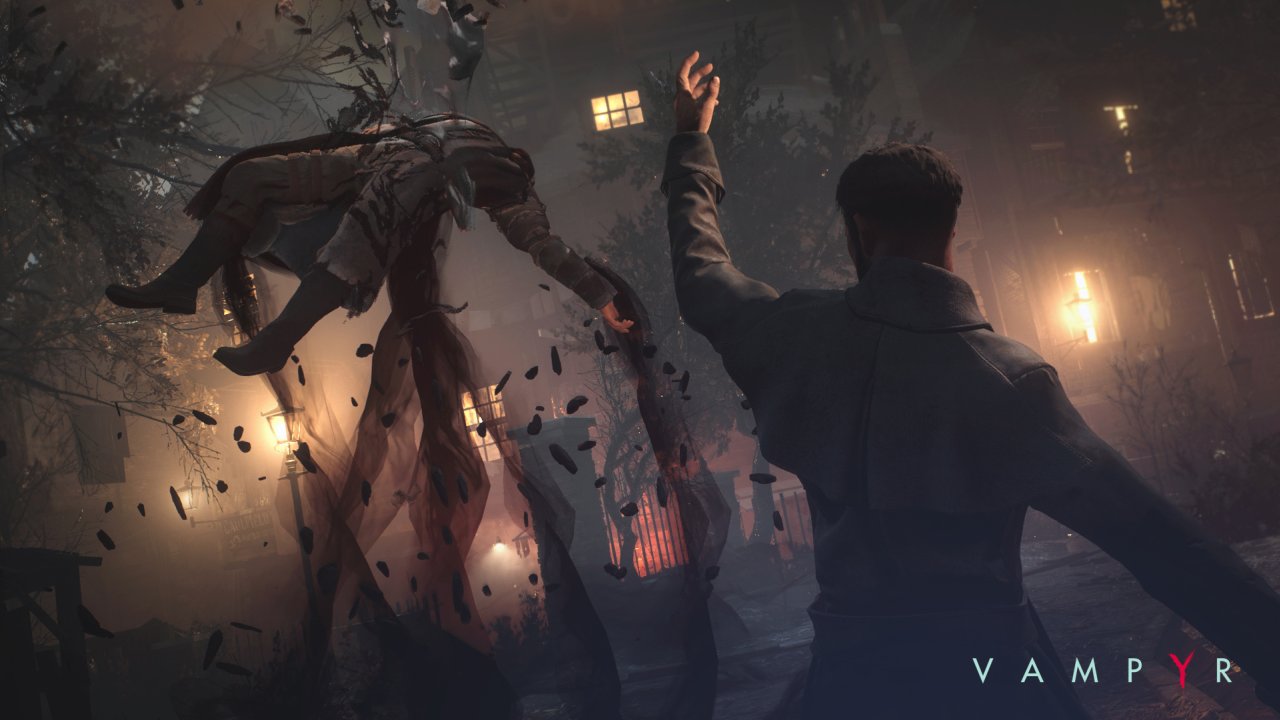 At last year’s E3, I checked out pre-alpha/proof-of-concept gameplay. This year at E3 2017, we saw a playthrough of a section of Vampyr slightly after its beginning, showcasing the combat, choice systems, and environment.

So, John’s recently become of a child of the night. His base of operation is currently a hospital because it’s Doctor Jonathan Reid. Here, he’s being sheltered by the owner, who must also deal with the effects of the burgeoning flu epidemic, as well as those affected by vampire attacks. Right off the bat, Vampyr sure looks a lot prettier than it did last time. The dark atmosphere is cluttered with objects—books stacked on tables, medical equipment strewn about, oil lamps casting dim light—it all evokes 20th century architecture extremely well.

John navigates a couple of floors towards a senior member of the hospital’s staff, who is in the midst of a heated debate with one of the Guards of Priwen, the city’s resident vampire hunters. In sheltering you, the doctor is putting himself at risk, and it’s plain to see that you and the path of this guard will cross in the future. However, for now, the vampire hunter was placated, and upon initiating a conversation with the doctor, the game revealed its dialogue wheel. By now, most people know what you’re getting with a dialogue wheel: a selection of answers/questions that align to a certain emotional spectrum. But because the doc is doing us a favour, risking his life and all, Jonathan chose to reassure him that everything will be okay. As an aside, when Jonathan speaks, he sounds like a man voicing a BBC documentary on antique clocks.

All is not well on the streets of London, though. We soon learn of an attack and Jonathan is all too willing to get to the bottom of it by finding a missing priest named Shaun. Speaking of grand story terms, in Vampyr, one of your ultimate goals is to concoct a cure for your—and by extension everyone else’s—affliction. By engaging in story missions, you creep closer to a (hopeful) remedy. This story mission would take us to the docks, but en route, we couldn’t help getting a little distracted.

To track people in London, we have the ever-increasing in popularity variant of Batman’s detective vision. I’ll let it slide because vampires have super senses, so why not? It does the usual, such as highlighting points of interest on the map, like NPCs. All the NPCs in Vampyr have their own story that supposedly ties to the game’s myriad plots in some fashion. How you interact will have a great effect on how Vampyr plays out.

Vampyr’s “big idea” is that you primarily level-up/gain experience through feeding. The more blood you ingest, the stronger you grow. Just whom you will feast on is the question. In order to assess patients, you have to get to know them. Will you sympathise will their plight, condemn them, help them out, or simply go for the best batch of blood regardless of emotional attachments? 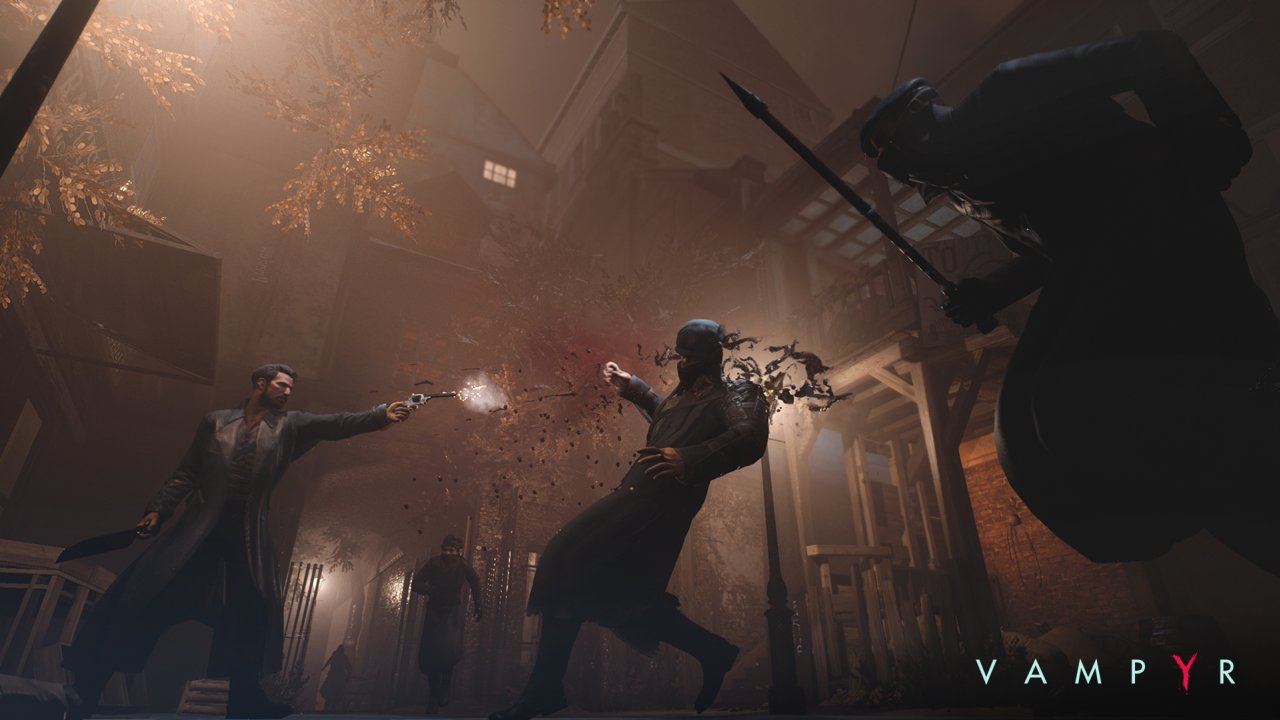 As we walk around the grim streets of London, we can see NPCs making the rounds, and the Guards of Priwen, who we would be smart to keep our distance from. The world itself is a sandbox, and DONTNOD has captured a 20th century look reminiscent of movies like From Hell or some Dickensian novel gone dark. Because this image of London is pervasive in a lot of media, we, as an audience, have a picture in our minds, and I think they’ve done a great job of realizing it.

We can’t stand about studying the scenery forever, though, and decide to engage a couple of Guards of Priwen. Compared to last time, Vampyr’s combat has vastly improved. Your ranged weapon attacks, and particularly the combo of blade and special claw attack, flow a lot better. Because it’s so common in the last few years of game design, you, of course, have a stamina bar for swings, forcing you to think several blows ahead. Your “mana” bar is your “blood” bar, and it functions much the same for using your vampire abilities. While your health will regen after a fight, you can suck on a neck during a melee. You can dodge to nip around foes, and there was a cool, ninja-like move where Jonathan zipped between targets in a trail of black smoke, running foes through. While some of the melee combat may look pedestrian, the abilities seem to add a lot of fun to encounters. And, of course, once foes are down, you can loot them for money and items to craft with.

After battle, it was time to get on with our missions. We needed to cross a bridge, but it was heavily guarded. Luckily, we’re a vampire, so were able to use our powers to flash-step across the canal and over to the other side. This notion of making your way around with unconventional pathways will not only allow you to access different areas, but uncover mysteries in your environment.

It wasn’t long before Jonathan encountered Skals, which are more aggressive, mutated vampires who run on instinct. Finding a man trapped behind a gate, we chose to save him from the Skals, which then allowed him to become part of our “world”, opening him up as a possible feeding option or quest-giver.

Eventually, we reach the docks after trawling the streets. People litter the area, though it is apparent something stinks—and it’s not the populace but the criminal element. Here, we head to a dockside bar in search of the priest, Shaun. You chat with the barkeep, who reveals the priest runs a night asylum, in an old warehouse, where he tends to the needy. The compass, like in Skyrim, points you in the right direction.

Before you hop to the asylum, we need to level up. We check our shopping list of viable sacrifices, but find no one suitable. As luck would have it, we stroll through the docks for flesh like a sailor just landed in port and we strike a vein: Seymour. We ask him what he does around these parts. After some expletives are shared, he does that thing in RPGs where people pour out their heart after knowing you for two seconds.

Seymour feels bad about his mum. He lost her necklace; we offer to find it. Detective Jonathan retrieves the necklace that Seymour’s dear old mum left, using his vampire vision. It’s under a pile of corpses—always in the last place you look. Gasp! Seymour’s an unrepentant murderer. Obviously, I found this pretty shallow and trite... maybe the social nuances of the proletariat in post-World War One London get better as the story progresses. 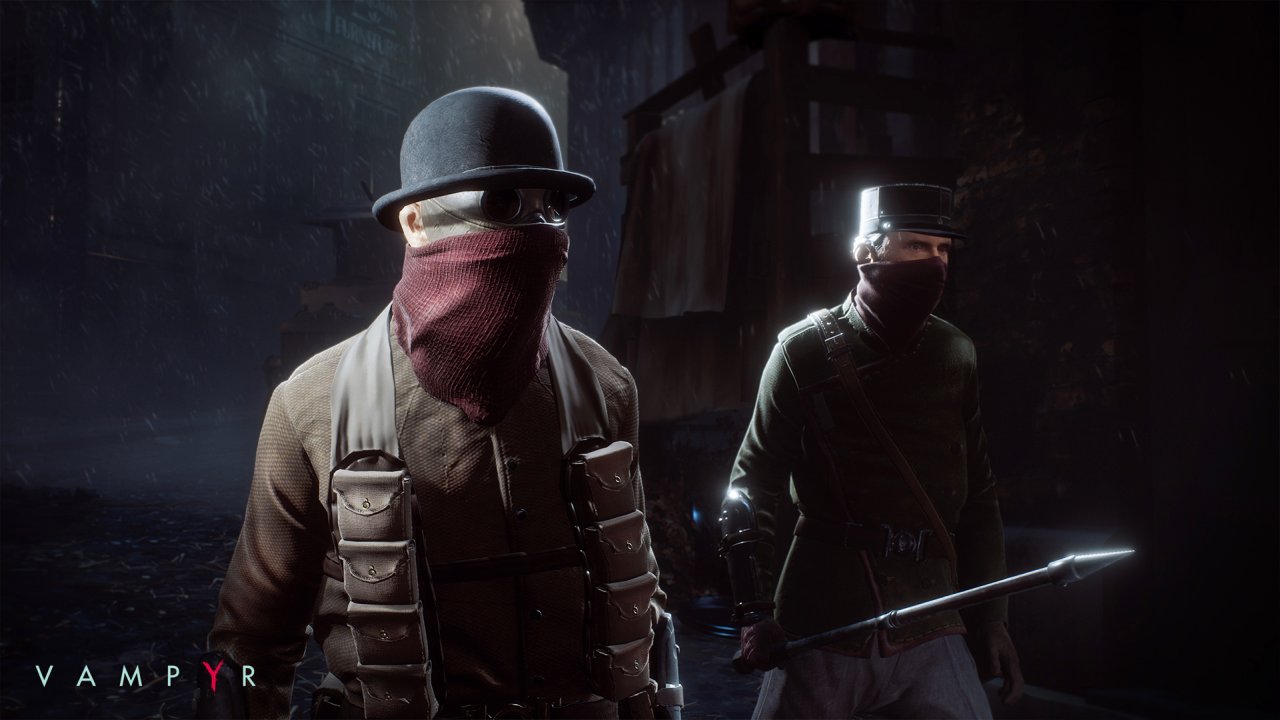 Anyway, we can choose to give the necklace to Stella (his mother), spawning new events; but we decide to give it back to the son instead. Seymour boasts about the murders, amongst other things, and we can use this information to “break” him, allowing us to drink from him. And with each potential victim, there is a question of blood quality. The better the quality, the more XP. He has a cold, so you can craft medicine, thus making him better and getting purer blood. Jonathan can also use his vision to see whether someone is going to do something naughty, and it’s always prudent to investigate your prey before slaughtering it. You also earn bonus XP from learning about the different characters too.

We follow Seymour through the streets; he enters a house. Our senses allow us to eavesdrop on conversations. You see Seymour and Stella, who is chewing his mum’s ear off about a kid. It all gets a bit Eastenders. The three characters are linked, so a death will resonate with those in that microcosm.

We have a chinwag with Stellar. Vampires need to be given permission to enter premises, so you work your charm to get inside—it’s gone from Eastenders to Confessions of a Window Cleaner in a heartbeat. If your mesmerize skill is high enough, you can enter without resistance. Your conversation with Stella earns hints to unlock conversational chains. Jonathan also discovers that she has some top-notch blood.

You are presented with a choice: kill the killer, with lower XP, or take out the old lady and get some good blood. There are no good or bad choices, only options. But you must be prepared for the ramifications on London’s ecosystem. We decide to feast on Stella. She gives a little Assassin's Creed-like death monologue before she expires. In drinking her blood, Jonathan has absorbed all the hints and memories from her, too. To level up, you must rest, so Jonathan visits a safe house to spend XP.

Your level up options will seem familiar: do you go tactical, on the defensive, AOE attacks or singular damage output, etc. A day progresses, London life goes on; Seymour took over his mum’s pad and it’s in disarray, but you get some loot.

As you approach your mission destination, guards and Skals are fighting, so you sneak around to another access point. You hop up a ledge to find an alternate entrance, finding a dead woman as your skirt around the tops of decrepit houses. You head to the manufacturing/textile plant and finally confront the priest, where a fantastic line is spoken by Jonathan: Shaun, are you eating raw flesh? 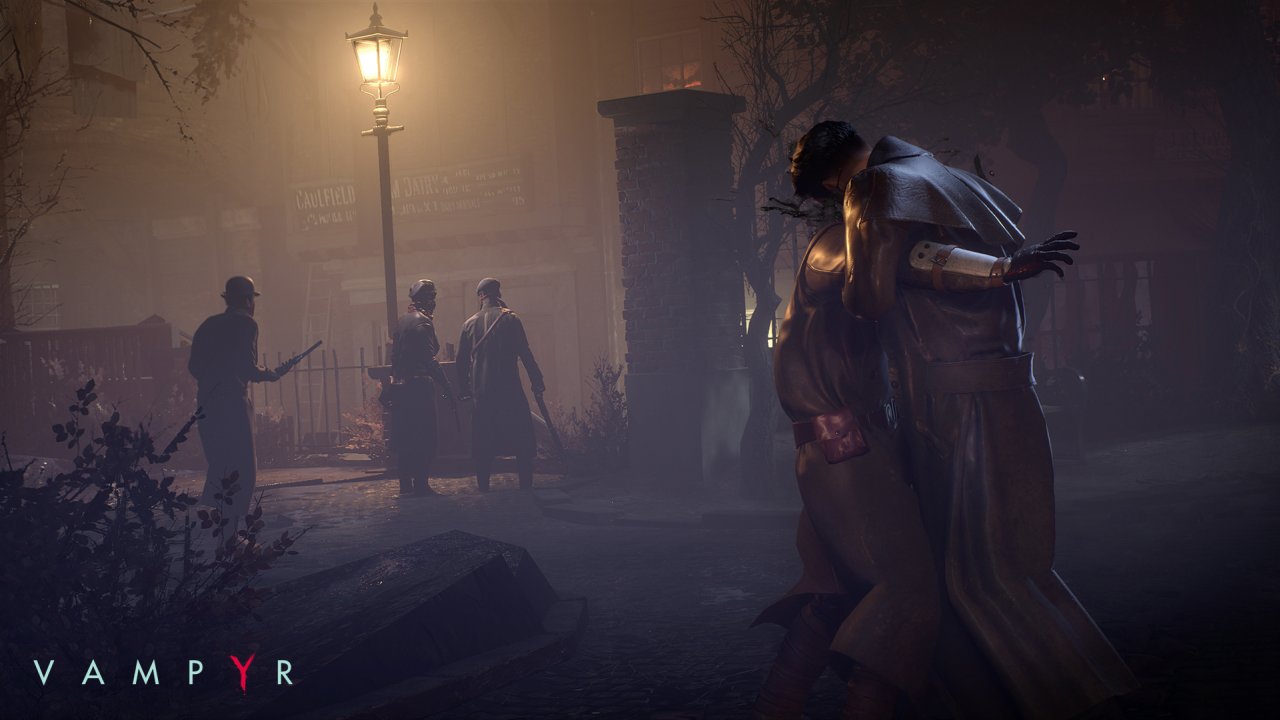 Shaun’s only gone and done a Hannibal Lecter, the madman. You engage in a heated, emotional debate, where Shaun attempts to justify his actions by claiming it’s the flesh of God. The voice acting is good, and towards the end of the scene, the camera and actors start to move, making it a lot more engaging.

After everything, you have a choice to make: kill him or let him live. What will you choose?

And that’s where Vampyr’s E3 2017 demo ends, leaving me with some conflicting impressions, but on the whole, interested to see if DONTNOD can pull off their mutagenic narrative with aplomb. Vampyr is planned for release in late 2017 on PC, Xbox One and PS4. 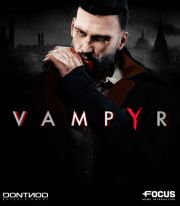